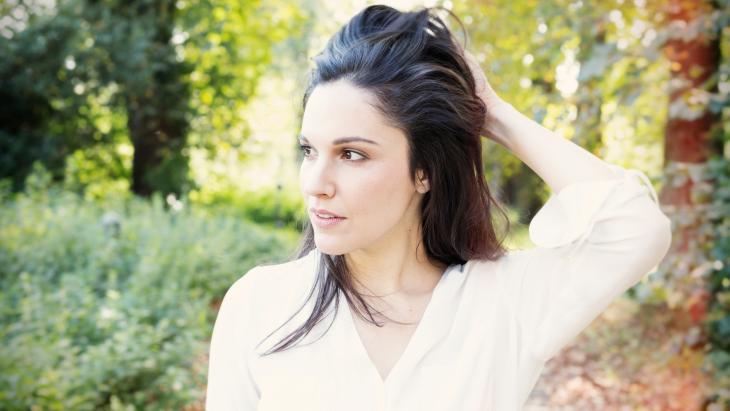 Simin Tander has undertaken a musical journey to her roots and to herself. The means of transport are varied: poems in Pashto, English and French, a jazz quartet and a finely nuanced, expressive alto voice. The destination is an exceptional album that transcends the boundaries between jazz, singer-songwriting and world music. Simin Tander's new album impresses listeners with its deep sensitivity and disarming honesty. By Stefan Franzen

"I transformed into dew and slept on the morning's bloom, weary and exhausted I slumbered in the resting place of your gaze. Today, you took me with you into the heavens with a smile." These are the lines with which Simin Tander opens her CD "Where Water Travels Home." Even in translation, they sound delicate, if not courtly.

"Those among the Pashtuns who are interested in art have a particular fondness for poems," says Tander. "Pashtun verse is always rich in images and has a very high status – much higher than that of music." Nevertheless, putting these words to music is the focus of her second work. For the singer, it means travelling to a home that, until now, lay undiscovered within her.

Simin Tander grew up in Cologne. Her father, head of the Kabul Press Agency and, as such, a key figure in Afghan political life, had come to Germany in order to study. Once there, he also worked at Deutsche Welle. Tander's father Qudus died young, when she was just four years old. It wasn't until much later that she learned he had also written poems and short stories.

Simin Tander began experimenting with her voice at a very early age. "My mother was a big Al Jarreau fan, and on vacations, I would, of course, sing along to the vocal solo from his piece 'Spain'." A propos Spain: As a teenager, she went through a period of intense enthusiasm for flamenco, but was just as fascinated with Björk.

Then the jazz singer Maria João came into the picture: "She was a confirmation of how I see and feel the voice, of all that is possible with song." Clear, Nordic elements in the form of Norway's Sidsel Endresden, Fado singers, Betty Carter and the instrumental language of Wayne Shorter are other companions in spirit for Simin Tander.

Tander studied jazz in the Dutch city of Arnhem and in New York. Sheila Jordan was one of her teachers. In 2010, she made her debut in a Dutch quartet with the album entitled "Wagma" (Morning Dew). Her fellow musicians in the quartet were Etienne Nillesen on drums, Cord Heineking on bass and Jeroen Van Vliet on piano.

With that release, she smashed open the typical vocabulary of jazz. The album ranged from takes on Nick Drake's "River Man" to the artful bolero "Obsesión," while Tander's forms of vocal expression included everything from scatting to a breathy invented language. Enthusiastic critics compared her with Meredith Monk and Gretchen Parlato.

Travelling to the source and the mouth

Now, in preparing that album's successor, she discovered a space she had never entered before. "It's a journey to the source and to the mouth. Just as water finds its path naturally, without forcing anything … that's what it's about. It's also about letting go of convictions and feelings so that you can come to your core."

At the centre of the work are three songs whose words required her to open herself to the Pashto language. It's an inheritance that long lay untouched after several years of having less close contact to her Afghan relatives in Germany and England.

"It was a major challenge to learn this language – not just to speak it correctly, but also to pronounce it pleasingly. I was able to speak it a little when I was small, but with the pronunciation, I had to start all over again with the help of a friend of my father's. Pashto has a lot of retroflex consonants that are rolled way back in the mouth, but it is nonetheless gentle and flowing."

From tabla rhythms to jazzy offbeats 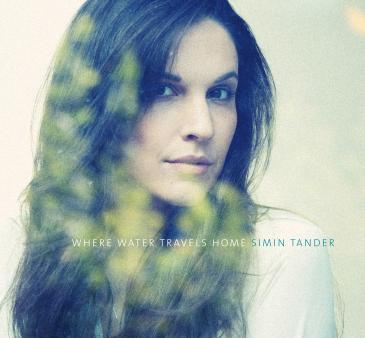 "When Water Travels Home" by Simin Tander unites raw fervour and tender melancholy, reflecting the singer's very personal journey to herself and her Afghan roots

The love poem mentioned at the beginning, whose author and period of origin are unknown, enchants with its melancholy mood and full-bodied syllables. The dancelike folk song "Larsha Nengrahar Ta", on the other hand, floats somewhere between tabla rhythms and jazzy offbeats. But the journey into herself goes deepest with "De Kor Arman," a song about desire rooted in the street sounds of Kabul. It is based on one of her father's poems.

In this key piece, her otherwise so freely flowing and gentle vocalisation shifts toward a dark, insistent tone. It's as though she has merged with her father.

The songs in Pashto form a dramatic whole where all paths seem to lead inward. Many images of water wind their way through the lyrics: the wide ocean, clouds and ice settle into the English verses that discuss separation and reorientation, where the girl and the woman talk to one another.

Her sister Mina Tander, a well-known actress in Germany, was involved in writing some of the lyrics. Playful intermezzi are also on hand, such as a charming miniature in an invented language for her niece, and, finally, an almost harrowingly mature adaption of Jacques Brel's "La Chanson des Vieux Amants".

When choosing the various languages on her album, Tander says she was able to allow certain sides of her personality and emotions "to blossom."

Vocal virtuosity is no longer her primary goal. "I increasingly find pleasure in singing a simple song, to touch people with simple means – that's at least as valuable as vocal improvisation."

The fact that she succeeds in this so completely on "Where Water Travels Home" is due in part to Tander's three fellow musicians on piano, bass and drums, who have become like a family to her. Adept and inventive in equal measure, they arrange for and accompany her, adding colour and imagination to a standard jazz combo.

Simin Tander says she can imagine heading more in the direction of world music in the future; not just in terms of lyrics, but also in terms of letting instruments from her father's homeland flow into her music. She tested the waters in this area recently with a Jazz from Central Eurasia concert at Halle's Women in Jazz festival, where she was joined by female colleagues from Lebanon, Uzbekistan, Bulgaria and Iran.

Moreover, her "Folksongs from Another Land" with Israeli guitarist David Golek explore yet another side of Simin Tander. "These folk songs are imaginary," she says. "In folk music, too, it's often about roots and arrival. But since I carry various cultures within me, I will always sing folk songs that are all my own."

In "Sparks Like Stars", Nadia Hashimi pulls the reader behind the curtain of modern history to peek backstage at the impact of war and terror on individual lives. Richard Marcus ... END_OF_DOCUMENT_TOKEN_TO_BE_REPLACED

In view of the catastrophic supply situation in Afghanistan, UN authorities are sounding the alarm. Inflation and growing poverty are exacerbating the situation. The Taliban ... END_OF_DOCUMENT_TOKEN_TO_BE_REPLACED

China to the east, Russia to the north, Afghanistan to the south: in this geopolitical environment, Kyrgyzstan, which has been independent since 1991, is attempting to make ... END_OF_DOCUMENT_TOKEN_TO_BE_REPLACED

The "War on Terror" has not only failed in Afghanistan, it has exacerbated insecurity and generated more terrorism. This is the main thrust of journalist Emran Feroz in his book, ... END_OF_DOCUMENT_TOKEN_TO_BE_REPLACED

As the Taliban shift their focus from insurgency to government, their most formidable rival is the Islamic State's regional chapter, which has staged a string of bloody attacks in ... END_OF_DOCUMENT_TOKEN_TO_BE_REPLACED

The Taliban’s victory over the United States in Afghanistan will not only greatly embolden their fellow jihadists, but also shake up the region’s geopolitics. An Afghanistan- ... END_OF_DOCUMENT_TOKEN_TO_BE_REPLACED
Author:
Stefan Franzen
Date:
Mail:
Send via mail

END_OF_DOCUMENT_TOKEN_TO_BE_REPLACED
Social media
and networks
Subscribe to our
newsletter