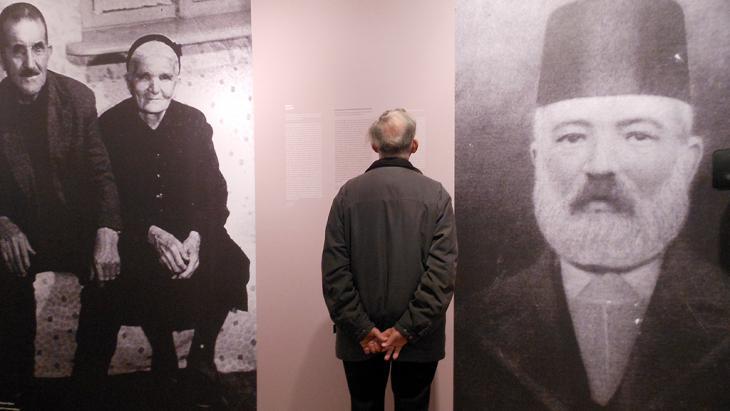 The German Empire and the Armenian genocide
Turning a blind eye

On 24 April, people all over the world will commemorate the mass killing of Armenians 100 years ago. A memorial service is planned in Germany as well. Many critics contend, however, that the country should take a closer look at the role played by the German Empire, which was an ally of the Ottoman Empire at the time of the massacres. By Ceyda Nurtsch

24 April 1915, the day on which Armenian intelligentsia and clergy based in Istanbul were deported to the Syrian desert, is regarded as the beginning of the atrocities committed under the Young Turks regime against the Armenian population of the Ottoman Empire. It is estimated that up to 1.5 million people lost their lives in these "death marches".

While the Turkish government still categorically rejects the term "genocide" and views the expulsions not as systematically planned and executed acts but rather as collateral damage amid the turmoil of the First World War, over 20 nations have in the meantime officially recognised the genocide – including France, Italy, Poland and Russia. Denying the genocide is even punishable by law in some countries, including Switzerland and Greece.

The German government, by contrast, has thus far displayed diplomatic caution in approaching this topic. Instead of using the word "genocide", it speaks of "expulsion and massacre". A related resolution dating from 2005 speaks only of the "inglorious role played by the German Empire".

During a trip to Armenia in October 2014, German Foreign Minister Frank Walter Steinmeier declared that the assessment of the events of 1915/16 should be left to the historians. Furthermore, he said, this was chiefly a matter for the two countries involved. 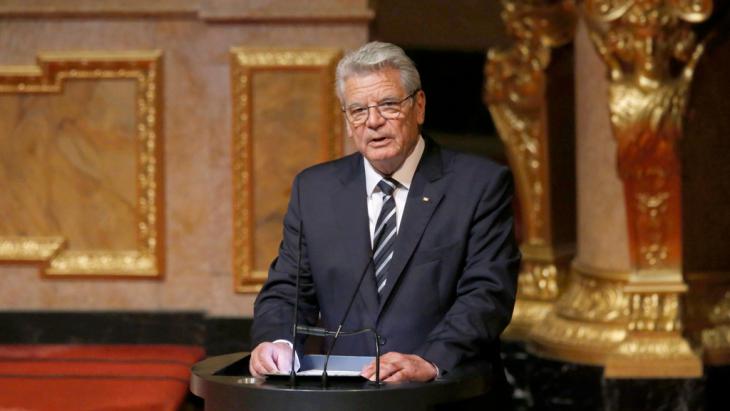 To the surprise of many, German President Joachim Gauck condemned the massacre of 1.5 million Armenians by Ottoman Turkish forces a century ago as "genocide". In doing so, he has gone further than both the German government and parliament, which have thus far avoided using the term. Gauck used the word in a speech during an ecumenical service at Berlin Cathedral on 23 April 2015, marking the 100th anniversary of the mass killings of 1.5 million Armenians by Ottoman Turkish forces

Germany too passive in the current debate?

As the 100th anniversary of the Armenian "Aghet" (catastrophe) drew nearer, however, critical voices were raised at the passive stance adopted by the German government. Armenian President Serzh Sargsyan called on Germany to at last address the issue. There is also increasing criticism from inside Germany. Opposition politicians and historians are calling on Germany to address the matter of the extent to which the German Empire, at the time the principal ally of the Ottoman Empire, was complicit in – or at least shared responsibility for – what happened.

The most recent denouncement came from Green Party chairman Cem Ozdemir. On a visit to the Armenian capital, Yerevan, in March 2015, which included a visit to the Genocide Memorial, he expressed his regret that the German government was still using inappropriate language, purposely avoiding the word "genocide". He called on the federal government to get to grips with German involvement in the historical crimes, to admit the country's complicity, and to act as intermediary between Turkey and Armenia.

Criticism has also been forthcoming from the Left Party. MP Ulla Jelpke, for example, declared in 2007 that Germany was trying to evade its own responsibility. As an ally of the Ottoman Empire during the First World War, the German Empire knew about the massacres and were in some cases involved, she said.

Jurgen Gottschlich, who was long based in Istanbul as correspondent for the German daily newspaper "taz", has contributed to scholarly research on the topic. His book "Beihilfe zum Volkermord. Deutschlands Rolle bei der Vernichtung der Armenier" (Accessory to genocide: Germany's role in the annihilation of the Armenians) was published in February 2015. Drawing mostly on German archive material, Gottschlich sheds light on this hitherto largely unknown chapter of the history of German diplomacy.

"Few Germans are likely to be familiar with this chapter of German history," said the author and journalist at the launch of his book in Berlin. "For many, German-Turkish relations begin with the arrival of migrant workers in the 1960s. Hardly anyone knows that the German Empire was at the time involved in Turkey politically and militarily, and thus aided and abetted the genocide." 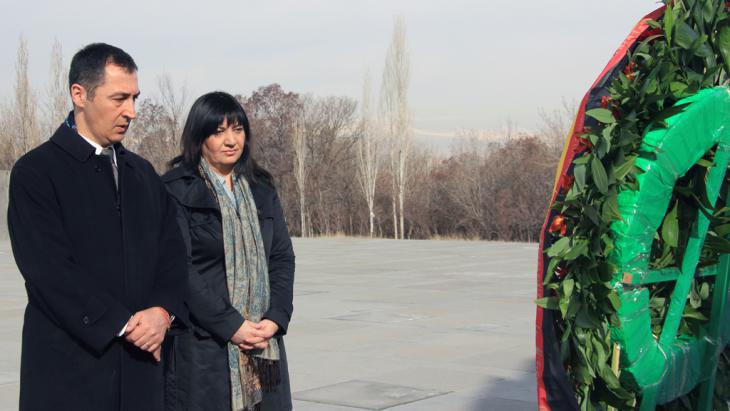 Cem Ozdemir and Ekin Deligoz of the German Greens, both of whom are of Turkish origin, laid a wreath at the Genocide Memorial in Yerevan during a visit to the Armenian capital on 12 March 2015. Ozdemir has called on the German government to recognise the massacre of Armenians in the Ottoman Empire 100 years ago as genocide: "100 years after the genocide, it is about time we no longer try to hide from this term"

Pains taken not to offend the Erdogan government

When it comes to grappling with its past, Germany tends to draw the line at the Holocaust, says Gottschlich. But he is convinced that the German Empire cooperated with the Ottomans in order to "conquer new markets and thus a place in the sun." He says that it quickly became evident that the Armenians were not merely to be deported, but also destroyed.

"For the past ten years, Germany has done nothing to come to terms with this matter," says Gottschlich. Germany will be absent from the centennial events, for which international delegations will travel to Yerevan. Instead, a church service commemorating the Armenians, Syrians and Pontic Greeks who perished in the First World War will be held at Berlin Cathedral, with President Gauck in attendance. In Gottschlich's view, this is a demonstration of cowardice. Germany should instead "admit that Germany was complicit." He adds: "They do not want to come into conflict with the Erdogan government."

The reality, however, is that German engagement with this topic would not cause as many waves as it would have just ten years ago. Although the threat of punishment by law under Article 301 ("Denigration of Turkishness") still exists, official historiography is gradually loosening up. A first step was taken on the literary scene in 2004 with the book "Oma" (Grandma) by the lawyer Fethiye Cetin. This autobiographical account tells the story of a family that kept its Armenian faith a secret from its own children.

Since then, several novels have come out that address a chapter that Turkish history books have up to now edited to fit official dictates. The biggest jolt to hit Turkish society was undoubtedly the assassination of the Armenian journalist Hrant Dink on a street in broad daylight in Istanbul in 2007. That the murderer has still not been found is greeted with great indignation in many parts of society. 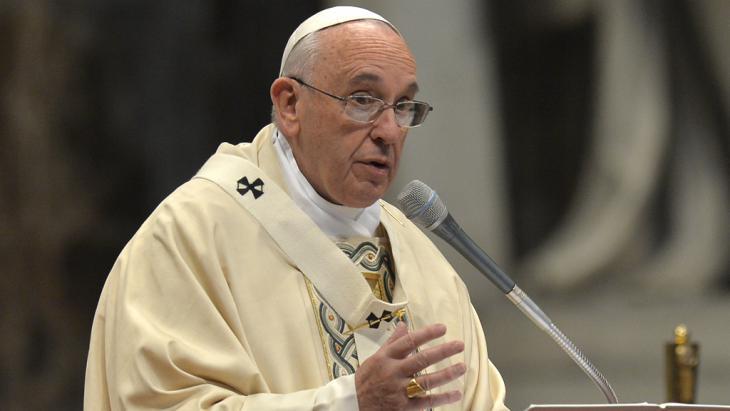 Cries of outrage after Pope's statement: what Pope Francis recently denounced as "the first genocide of the twentieth century" is not being acknowledged as a genocide at all by Turkey, successor to the Ottoman Empire. The numbers of Armenians involved have been exaggerated, argue Turks who refuse to accept any blame

Rapprochement, but not acknowledgement

The situation has eased politically somewhat as a result of the ruling AK party, which, in this matter as in others, has demonstratively taken a different course to previous governments, tentatively heralding a political opening. In 2009, in what became known as "football diplomacy" – on the occasion of a qualifying match for the World Cup in Bursa where both the Armenian and Turkish teams had nothing to lose and nothing to gain –Turkish Foreign Minister Ahmet Davutoglu and his Armenian counterpart Edward Nalbandjan signed two protocols for mutual recognition and the opening of borders, establishing diplomatic relations and launching the construction of transport connections.

Nevertheless, the Turkish government is still far from acknowledging the genocide. This was made amply clear by Erdogan's words in mid-March. At the time, he said it made him "sad" that Pope Francis had referred to the events as the "first genocide of the twentieth century", the Turkish President said, repeating the words of his predecessor, Abdullah Gul, by indicating that the archives were open to everyone and the historians should be the ones to deal with the topic.

Addressing Germany's role and admitting that country's complicity, as urged by Gottschlich and others, would make it much harder for Turkey to avoid addressing its own history.

But as long as there is such great interest in skirting the issue on both sides, this is not going to happen. And all the appeals of the Armenian community and of the Central Council of Armenians are not likely to change anything. The hundredth anniversary will thus only be commemorated with an ecumenical service.

Home
Print
Newsletter
More on this topic
France's controversial law on Armenia: Empoisoned relationsArmenian policy on Turkey: Domestic policy shiftsRelations between Armenia and Turkey: Uncertainty until the endTurkey-Armenia relations: Football diplomacy starts to bear fruitsTurkey and Armenia: "This is none of Europe's business"
Related Topics
Ahmet Davutoglu, Armenians, Christians in the Islamic world, History of the Near and Middle East, Hrant Dink, Recep Tayyip Erdogan
All Topics

More and more voices are being raised in Turkey that challenge previous versions of the country's history. These alternative accounts, still largely ignored by official quarters, ... END_OF_DOCUMENT_TOKEN_TO_BE_REPLACED

The Ukraine war is changing the global geopolitical landscape. Ali Khamenei, Iran's most powerful man, is already cosying up to Russia in anticipation of a harsh post-war reality ... END_OF_DOCUMENT_TOKEN_TO_BE_REPLACED

Many Turks are dissatisfied with the international status of their country. At the same time, opinion polls reveal great scepticism among the Turkish population towards the USA. ... END_OF_DOCUMENT_TOKEN_TO_BE_REPLACED

From the Euphrates to the Mekong, dams that ensure one country's water supply risk leaving others parched. But shared water resources can be a source of peace as well as conflict ... END_OF_DOCUMENT_TOKEN_TO_BE_REPLACED

Turkey is turning towards the Turkic nations of Central Asia, intensifying its economic, diplomatic and military relationships with these countries. So what is driving Turkey’s ... END_OF_DOCUMENT_TOKEN_TO_BE_REPLACED

Turkish-Armenian rapprochement kicked off in Moscow in January, after a break of 13 years. This time, focusing on relatively easy fixes such as trade and transportation, both ... END_OF_DOCUMENT_TOKEN_TO_BE_REPLACED
Author:
Ceyda Nurtsch
Date:
Mail:
Send via mail

END_OF_DOCUMENT_TOKEN_TO_BE_REPLACED
Social media
and networks
Subscribe to our
newsletter