Germany's juniors trumped England 4:0 to win the European U21 Championship in Sweden. The German side is a melting pot of cultures, moulded into a successful squad by the coach Horst Hrubesch. André Tucic introduces the team 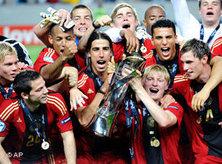 Germany's team captain Sami Khedira and Andreas Beck (middle) after the 4-0 victory in the U21 European Championship final soccer match Germany vs. England at the Malmo New Stadium, Monday, June 29, 2009

​​"Multi-culti has run its course," announced German Chancellor Angela Merkel during a speech at a party conference of the Conservative ÖVP (Austrian People's Party) in September 2008.

Less than a year later, the German Under-21 football team is showing how wrong she was. Almost half of the players on the German squad for the European Under-21 Championships, which are currently taking place in Sweden, have roots in countries other than Germany.

Of the 23 young men in the squad coached by Horst Hrubesch, eleven have parents from nine different countries.

In the team's opening match against Spain, goalie Manuel Neuer and centre back defender Benedikt Höwedes (Schalke 04) were the only two on the pitch with two German parents. It was only when Polish-born Sebastian Boenisch (Werder Bremen) had to be substituted because of injury that they were joined by a third, Marcel Schmelzer (Borussia Dortmund).

The rest of the team have international roots. They either have fathers from Tunisia, Nigeria or Ghana; were themselves born in Iran, Bosnia or Siberia; or until recently held Spanish, Polish or Turkish passports. As diverse as their national backgrounds may be, all of them now wear the white jersey with the federal eagle.

The integrating power of football

This is why Oliver Bierhoff, manager of the German team, likes to speak of "living integration." The Under-21 team, says Bierhoff, "shows the integrative nature of football. It is lovely to see how these players give their all for Germany. The intention is that the DFB (German Football Association) will be their home," says Bierhoff.

​​In other words, football is doing what some German politicians have long since stopped doing, namely seeing Germany as a blend of many different nationalities that works. Matthias Sammer, DFB sporting director, finds it "lovely, and an example of how people from different cultures and with different skin colours can work as a team."

The young players themselves see things in a much more sober light and describe the situation in much less statesman-like terms. Goalie Manuel Neuer, for example, thinks its "the norm. I was born in the Ruhr region; I grew up with lots of immigrant children in my class or on the teams in the sports club."

Team coach, Horst Hrubesch, also considers it normal: "We live in a multi-cultural society. It doesn't matter what your surname is or where you come from. In France, one in four players on the national squad is not French." The same can now be said of Germany too.

The reason being that the DFB has in recent years made a huge effort to foster young migrants and even employed a dedicated integration officer two years ago. DFB officials like to use catchphrases like "tolerance" and "the integrating force of football". But this is not about the milk of human kindness; German football has high expectations when it comes to its multi-culti Under-21 team.

Oliver Bierhoff, manager of the German team, believes that players with parents from other nations are an enrichment: "They bring different characteristics, different creativity and a different philosophy to the team"

​​"We at the DFB have made a conscious decision to highlight this migration background," explains Bierhoff, "because players with parents from other countries are an enrichment for us. They bring different characteristics, different creativity and a different philosophy to the team."

Nevertheless, only those who can offer the DFB an added value are supported and fostered. The midfield defender Dennis Aogo (Hamburger SV), born in Karlsruhe to a Nigerian father, sums it up neatly: "It is said that African footballers are physically strong, while European players have good tactical training. A mixture of the two can be very good for the DFB."

The DFB's plan seems to be working; for the first time in 27 years, the German team has reached the semi final of the European Under-21 Championships in Sweden.

The migrants, who account for almost half of the squad, had a role to play in this success. There is the African fraction with the aforementioned Dennis Aogo, Jerome Boateng (Hamburger SV), whose father is from Ghana, and Chinedu Ede (MSV Duisburg), whose father is Nigerian. Then there is Tehran-born Ashkan Dejagah (VfL Wolfsburg), the two Tunisians Sami Khedira (VfB Stuttgart) and Änis Ben-Hatira (MSV Duisburg), and the Gelsenkirchen-born German of Turkish origin, Mesut Özil (Werder Bremen).

Not to mention Gonzalo Castro (Bayer Leverkusen), who was born in Wuppertal to Spanish parents, the Siberian-born Andreas Beck (TSG Hoffenheim) and Marko Marin (Borussia Mönchengladbach) who was born in Gradiska, Bosnia.

This mixture of nationalities has grown together to form a unit. But Angela Merkel was right about one thing: here too, language is the key to success.

"All of them speak reasonably good German," says goalie Manuel Neuer with a twinkle in his eye. How right he is! The outstanding defender Jerome Boateng has a broad Berlin accent, while captain Semi Khedira makes absolutely no attempt to conceal his Swabian dialect. In other words, the young men are incredibly well integrated and identify with the country in which they grew up.

Dennis Aogo sees it as "a message for life". Regardless of your roots, "you can live together and achieve great things," he says. The DFB is proud of its integration work and hopes that it is setting an example for the rest of society. Some fans, however, still have trouble coming to terms with all this multiculturalism.

Some traditionalists, for example, grumble about Under-21 players not singing the national anthem, which is always played before internationals. "We sometimes get letters of complaint if someone doesn't sing along. But sometimes fans complain about the players' hair styles too. You can't please everyone," says Bierhoff. The manager of the German football team does not consider immobile lips during the national anthem to be proof that someone doesn't identify with the country for which he is playing.

"It's a personal matter. Some of them have a close bond with the country of their parents. We require members of the team to be respectful and behave in a certain way, but we do not stipulate that they sing the national anthem," says Bierhoff.

Dennis Aogo shares this laid-back attitude: "People shouldn't attach too much importance to it. I don't sing the national anthem and I am still proud to play for Germany." And if the boys actually manage to win the European Under-21 Championships, it is unlikely that anyone will complain about them not singing the anthem. It would be interesting to see if Angela Merkel would change her mind about the failure of multiculturalism if they did.

Young Turkish-German Footballers
For my Country, Against My Country
In their most recent friendly match, the Turkish national team won against Germany, with two goals from the Turkish-Germans Nuri Sahin and Halil Altintop. Has the German football association failed to integrate young talents of Turkish origin? André Tucic looks into the issue

Portait of Sami Khedira
Origins are Irrelevant in Football
The professional footballer Sami Khedira holds a Tunisian and a German passport. Off the pitch, the 21-year-old midfielder from VfB Stuttgart supports integration projects. And it looks like we'll soon see him in the German kit. A portrait by André Tucic

Turkish Football
Mirror of National Identity
With its dramatic ascent to the semifinals of the Euro 2008, the Turkish team has impressed the world of football. But how much potential does Turkish football really have? Amin Farzanefar in an interview with sports journalist and Turkey expert Tobias Schächter

With his new album, "A Voice Keeps Calling Me", the Persian santur player Kioomars Musayyebi is building bridges from Iran across the Arab world to European early music. By Stefan ... END_OF_DOCUMENT_TOKEN_TO_BE_REPLACED

Former lawyer Said Haider has invented a chatbot for those seeking advice on anti-discrimination issues – Meta is the first chatbot of its kind in the world. In conversation with ... END_OF_DOCUMENT_TOKEN_TO_BE_REPLACED

Benjamin Idriz, imam of the mosque in Penzberg near Munich, is one of the most prominent representatives of Islam in Germany. He sees his role as building bridges to mainstream ... END_OF_DOCUMENT_TOKEN_TO_BE_REPLACED

People these days are seeking orientation in a rapidly changing world. In response, all religions – each unique in their customs and traditions – need to pull together, says Chief ... END_OF_DOCUMENT_TOKEN_TO_BE_REPLACED

On 10 September, WDR, the public broadcaster in Germany's most populous western state, introduced the 28-year-old journalist Nemi El-Hassan as the new presenter of its popular and ... END_OF_DOCUMENT_TOKEN_TO_BE_REPLACED
Date:
Mail:
Send via mail

END_OF_DOCUMENT_TOKEN_TO_BE_REPLACED
Social media
and networks
Subscribe to our
newsletter