Pink's interest in the Koran was rekindled when a prominent guest came to her seminar: Nasr Hamid Abu Zayd, the Egyptian literary and Islamic scholar, who has called for the Koran to no longer to be read literally. His philosophical theses were however quickly branded heretical by the orthodoxy. Pink wrote a term paper on exegesis as a result and afterward continued to pursue the subject.

When she later gave seminars on the Koran and exegesis as a research assistant at the Free University of Berlin, she noticed that the literature on the subject was limited to what Western researchers found intriguing, i.e. either radical Salafist currents or extremely progressive interpretations. What was happening in the Islamic world at large attracted little interest. She had the urge to delve deeper, and years later her idea gave birth to The Global Qur'an research project.

If you ask Johanna Pink what the Koran means to her, you get a sober answer: "a scholarly subject". What she finds exciting is what the text means for Muslims today. She has not experienced any hostility as a result of her research. 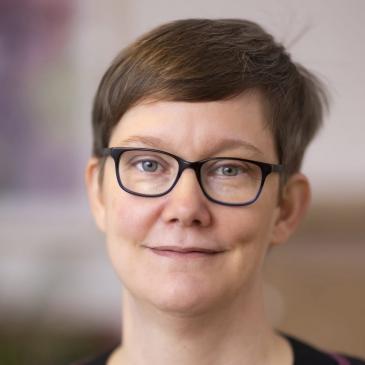 In Christianity, God is embodied in a human being, in Islam in a book: if you ask Johanna Pink what the Koran means to her, you get a sober answer: "a scholarly subject". What she finds exciting is what the text means for Muslims today. Not only the content, but also the object itself is sacred. Yet, very few of the world's 1.9 billion Muslims can read God's word as passed down over the centuries – because only 20 percent of them today are native Arabic speakers. "And that," Pink says, "is where translation comes in"

Only 20 percent of Muslims are native speakers of Arabic

The Qur'an is a powerful book. The liberal theologian Abu Zayd once described it as both the most beautiful and the most dangerous book in the world. Its interpretation can lead to terrorism or to tolerance. Goethe lamented its tautologies, and for the Enlightenment philosopher Voltaire it was simply an incomprehensible text.

Not only the content, but also the object itself is sacred. In Christianity, God is embodied in a human being, in Islam in a book. Yet very few of the world's 1.9 billion Muslims can read God's word as passed down over the centuries – because only 20 percent of them today are native Arabic speakers. "And that," Pink says, "is where translation comes in."

The prevailing opinion among scholars has always been that it was forbidden to use translations for ritual purposes. The liturgy should be limited to Arabic, the language in which the Koran was revealed to the Prophet Muhammad. Rite took precedence over understanding.

So-called interlinear translations into Persian or Turkish did exist, explaining the individual words between the lines, but these were primarily paedagogical aids.

Religious scholars also resisted translations for more profane reasons, fearing that the Arabic Koran, which was meant to unite all Muslims, could be replaced by nationalist versions or misinterpreted by translators. More than anything, they feared losing their own influence. The advent of the printing press had already broken their monopoly on the transmission of religious knowledge.

At the dawn of the twentieth century, things began to change. Muslim reformists wanted the Koran to be seen as a guide for the faithful. But in order to fulfil that function, its words had to be understood. The missionary concept also began to play a major role. The result was an ongoing wave of Koran translations.

The impetus for this rethinking was, of all things, the success of a group that was rejected by the majority of Muslims as being un-Islamic: the Ahmadiyya. Adherents of the movement, founded in the late nineteenth century, see themselves as reformers, whereas the majority of Muslims regard them as infidels who venerate their founder as a prophet.

"Anyone who translates the Koran must needs take a stance"

The Ahmadiyya successfully proselytised not only in India, but also in England. Orthodox believers and reformers alike eventually relinquished their opposition. "At that point, the idea that Koran translations could be problematic collapsed," Pink says. As late as 1925, scholars at Al-Azhar University in Cairo were still burning English translations of the Koran. Ten years later, they were producing them themselves.

The Turkish parliament commissioned a translation of the Koran in the 1930s. In Indonesia, the government had the Koran translated into the new national language Bahasa Indonesia, hoping to enhance the religious-political value of the new state and to spread the new language more quickly. "The Koran translations were intended to popularise the new national languages," Pink says – and to put a national stamp on Islam.

As the Western world emerges from a holiday season made less festive by COVID-19, millions of children in Afghanistan are starting 2022 facing the prospect of famine, illness, and ... END_OF_DOCUMENT_TOKEN_TO_BE_REPLACED

A wedding extravaganza of bright colours, flowers, feasting and dancing, yet the bride, Nefie Eminkova, who comes from Bulgaria's Pomak – Muslim – minority, can see none of it. ... END_OF_DOCUMENT_TOKEN_TO_BE_REPLACED

Every year in December, the team at Qantara.de takes a look back at the articles that proved most popular with our readers. This year is no different. Here is a run-down of the ... END_OF_DOCUMENT_TOKEN_TO_BE_REPLACED

Jesus – Issa in Arabic – doesn’t merely enjoy the highest place among the prophets in the Koran. He is also revered in Islam’s mystical tradition for his message of love and mercy ... END_OF_DOCUMENT_TOKEN_TO_BE_REPLACED

The military in Sudan has never waged war against a neighbour, but it has already staged 17 coups. Tens of thousands of people are risking their lives to oust the military by ... END_OF_DOCUMENT_TOKEN_TO_BE_REPLACED

The many terrorist attacks France has faced over the last ten years have poisoned the political discourse, especially when it comes to migration. Since 2012 a relentless stream of ... END_OF_DOCUMENT_TOKEN_TO_BE_REPLACED
Author:
Arnfried Schenk
Date:
Mail:
Send via mail

END_OF_DOCUMENT_TOKEN_TO_BE_REPLACED
Social media
and networks
Subscribe to our
newsletter