Saudi Arabia, with a few decades' delay, placed itself at the forefront of the translation movement. Initially, the Koran was only printed in Arabic there, but soon translations into dozens of languages began appearing. Worldly interests contributed to these efforts. Johanna Pink calls it "building soft power in foreign policy". King Fahd, who came to power in 1982, wanted to gain influence over the multilingual Muslim public and at the same time enhance the religious prestige of his own country.

Turkey, too, uses translations as a foreign policy tool, Pink tells us. The aim is to demonstrate presence, whether in the Balkans, Africa or Central Asia. In the regions of the former Soviet Union, Iran is attempting to distribute Koran translations with a Shia spin among the populace. And in many European countries, radical Salafist groups are active as translators and proselytise using copies of the Koran in the respective national language.

"Anyone who translates the Koran," says Pink, "must needs take a stance." This has given rise to ongoing disputes between Salafists and traditional scholars, for instance with regard to the attributes of God: are the concepts of God's hand or God's throne to be taken literally or metaphorically? Sura 4 verse 34 is a notorious source of debate: "Men are in charge of women (...). But those [wives] from whom you fear arrogance – [first] advise them; (…) and [finally] strike them." 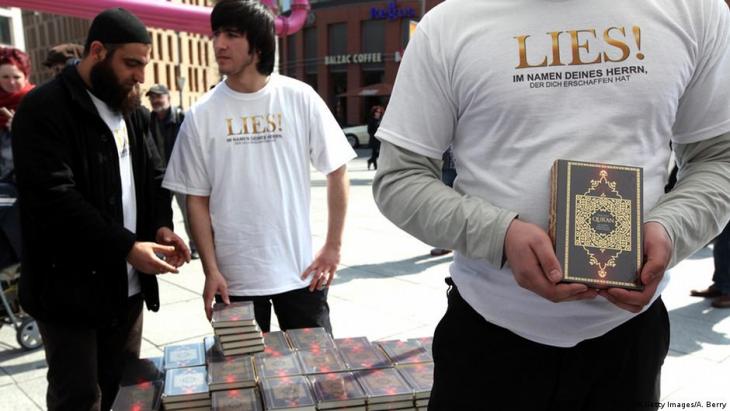 In many European countries, radical Salafist groups are active as translators and proselytise using copies of the Koran in the respective national language to cement their particular interpretation of Islam. "Anyone who translates the Koran," says Johanna Pink, "must needs take a stance." This has given rise to ongoing disputes between Salafists and traditional scholars, for instance with regard to the attributes of God: are the concepts of God's hand or God's throne to be taken literally or metaphorically?

How is one to approach such a passage? Pink says that if the verse is taken literally, it apparently gives men permission to beat their wives. The fundamental question is: do you soften the verse through the way you translate it? Or do you say: that's how the verse was written, but it can only be understood in the context of its time, asking what meaning it has for us today?

Until the twentieth century, this verse was not considered problematic, according to Pink. But translations into Western languages show evidence of trying to weaken the statement. There are a wide range of translations for the verb "daraba", from "to beat", to "to punish", to "symbolic, non-painful striking" or even "to separate oneself from others". In general, the desire for more egalitarian readings of the Koran is growing, Pink says.

In Germany, Islam has become more visible in recent decades as a result of immigration. This has led to a need for Islamic literature in German, so that a language must be found for discussing Islamic concepts. The German religious vocabulary is Christian in character. Should you, for instance, write Allah or God? Do you say prayer or leave the Arabic term "salāt" to more accurately describe the ritual obligatory prayers? "Koran translations reflect how societies change," says Johanna Pink.

She hopes that her project will help broaden the focus of Islamic Studies. And that countries such as Indonesia and regions – including Europe – that have not been taken seriously in the past in terms of the production of Islamic texts and ideas will attract more attention.

The Middle East is still the main focus of controversy – take, for example, a Hebrew translation of the Koran that was published at the beginning of 2021 by Saudi Arabia. The Islamist Hamas accused the Saudis of "Judaising" the Koran by producing a translation serving Jewish interests and thus placing a normalisation of relations with Israel above Palestinian interests. The accusations made against the translation were groundless, probably spread by Iran, Saudi Arabia's biggest rival in the region, Pink suspects. Once again, the translation of centuries-old lines reverberated through contemporary politics.

As the Western world emerges from a holiday season made less festive by COVID-19, millions of children in Afghanistan are starting 2022 facing the prospect of famine, illness, and ... END_OF_DOCUMENT_TOKEN_TO_BE_REPLACED

A wedding extravaganza of bright colours, flowers, feasting and dancing, yet the bride, Nefie Eminkova, who comes from Bulgaria's Pomak – Muslim – minority, can see none of it. ... END_OF_DOCUMENT_TOKEN_TO_BE_REPLACED

Every year in December, the team at Qantara.de takes a look back at the articles that proved most popular with our readers. This year is no different. Here is a run-down of the ... END_OF_DOCUMENT_TOKEN_TO_BE_REPLACED

Jesus – Issa in Arabic – doesn’t merely enjoy the highest place among the prophets in the Koran. He is also revered in Islam’s mystical tradition for his message of love and mercy ... END_OF_DOCUMENT_TOKEN_TO_BE_REPLACED

The military in Sudan has never waged war against a neighbour, but it has already staged 17 coups. Tens of thousands of people are risking their lives to oust the military by ... END_OF_DOCUMENT_TOKEN_TO_BE_REPLACED

The many terrorist attacks France has faced over the last ten years have poisoned the political discourse, especially when it comes to migration. Since 2012 a relentless stream of ... END_OF_DOCUMENT_TOKEN_TO_BE_REPLACED
Author:
Arnfried Schenk
Date:
Mail:
Send via mail

END_OF_DOCUMENT_TOKEN_TO_BE_REPLACED
Social media
and networks
Subscribe to our
newsletter