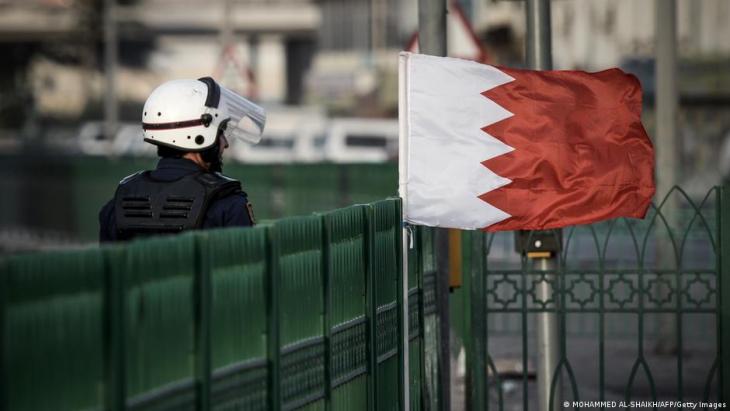 The catastrophic human rights situation in Bahrain is being largely ignored by the rest of the world. Despite all the damning evidence, which includes a Human Rights Watch report, the West is unlikely to apply any pressure on the regime due to geostrategic interests. By Diana Hodali

The largest Catholic church on the Arabian Peninsula has just opened its doors in Bahrain. The house of worship is called "Our Lady of Arabia" and is located just a few kilometres from the capital Manama. There are around 80,000 Catholics in Bahrain: the new 2,300-capacity cathedral should go some way to improving their access to church services.

Bahrain is keen to portray itself as an open, religiously tolerant nation. According to a report from the official news agency BNA, Crown Prince Salman bin Hamad Al Khalifa, who is also the prime minister, has emphasised the King’s obligation to turn "Bahrain into an inspiring model in the promotion of tolerance and openness".

Something he fails to mention, however, is that the Al Khalifa Sunni ruling family is crushing all attempts by the Shia population to participate in political life, in particular since the beginning of the Arab protests in 2011. "The massive discrimination of the nation’s Shia Muslims constitutes a significant part of Bahraini politics. They are not represented at all at the interfaces of power," says Gulf States analyst Guido Steinberg from the German Institute for International and Security Affairs in Berlin. This is despite the fact that Shias – at up to 70 percent – represent the majority of the population.

For a long time, there were encouraging prospects for flourishing democratic structures in the tiny nation. City council elections for all citizens took place in Manama in 1926, in 1939 there was even a workers’ strike in Bahrain – the first on the Gulf Peninsula. In 1971, Bahrain ceded from the British protectorate. Three decades of popular discontent ensued, as authoritarianism increased. Eventually the new emir, Hamad bin Isa Al Khalifa, pledged the liberalisation of political life.

But precisely one year later, the emir declared himself King and imposed a new constitution that confirmed the absolutism of the regime. Levels of resentment grew. When the opposition Shia Al Wefaq party captured more than 60 percent of the vote in a 2010 election, yet received fewer than half of the 40 available seats due to existing laws, Shia citizens took to the streets during the Arab uprisings of 2011 to demand equal rights.

The outcome: the protests were brutally crushed with the help of Saudi Arabia and the United Arab Emirates. Bahrain has never been a liberal nation, says Steinberg. "However from 2011, the authoritarianism became far more uncompromising." 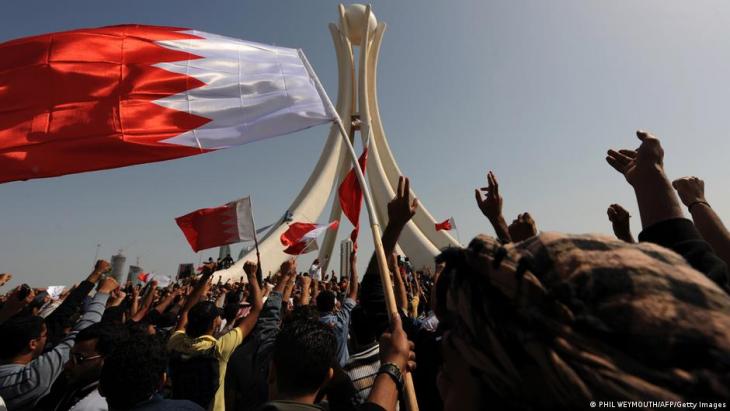 During the Arab Spring in 2011, thousands of Shias in Bahrain took to the streets for more equal rights. The result: the protests were brutally put down with the help of Saudi Arabia and the United Arab Emirates. Bahrain has never been a liberal country, says Gulf states expert Guido Steinberg. "However from 2011, the authoritarianism became far more uncompromising"

Members of the Bahraini opposition and activists in prison

From that moment on, freedom of speech and political activities that were once tolerated, were criminalised. Activists and critical journalists ended up in jail. According to the latest Human Rights Watch (HRW) report on Bahrain, 27 people are currently on death row, with 25 of those facing imminent execution. Human Rights Watch says that since ending the moratorium on executions in the year 2017, the government has killed six people.

Since their arrest in the year 2011, 13 prominent dissidents are serving long custodial sentences for their roles in the protests for more democracy. They include Abdulhadi al-Khawaja, one of the founders of the Bahrain Center for Human Rights, as well as Abduljalil al-Singace, a leader of the unlicensed opposition group Al Haq. Both received life sentences.

Several members of the Shia opposition Al Wefaq party – and the leftist Waad party – were even stripped of their citizenship and civil rights after 2011. Sheikh Ali Salman, the leader of Al Wefaq, is also serving a life sentence after a court upheld his January 2019 conviction for allegedly spying for Qatar.

17th December is the Martyrs' Day in Bahrain.
I stand today in solidarity with the families of the martyrs and I join their voices in calling for an end to the culture of impunity. pic.twitter.com/xH6zmbzhLN

No independent media left in Bahrain

The human rights activist Nabil Rajab was the only detainee to be set free in June 2020 after almost three years in prison, as part of what Bahrain terms its ‘alternative sentencing’ reforms. On the condition that he discontinued his pro-human rights activities.

In 2010, Rajab was accused of supporting terrorism by pro-regime media and eventually sentenced to five years in prison in 2018. While some independent media outlets did exist until 2017, this situation is now very different. "All independent Bahraini media have been banned since 2017 from operating in the country and all opposition groups dissolved," writes Human Rights Watch in its current human rights report on Bahrain.

Anyone daring to criticise the ruling family on social media risks arrest. For example, according to the Citizen Lab at the University of Toronto, the mobile phones of nine Bahraini activists were hacked with Israeli NSO Group spy software between June 2020 and February 2021. Several of them now live in exile.

Criticism from the West has no impact

The West is aware of this summary and the human rights situation in Bahrain. But it was March 2021 before the European Parliament passed an almost-unanimous resolution condemning the actions of the regime. When several French parliamentarians criticised human rights violations in Bahrain in October, Bahrain rejected the accusations. The Kingdom declared that Shia Iran was stoking the protests in a bid to topple the government in Manama. Claims denied in turn by Tehran. 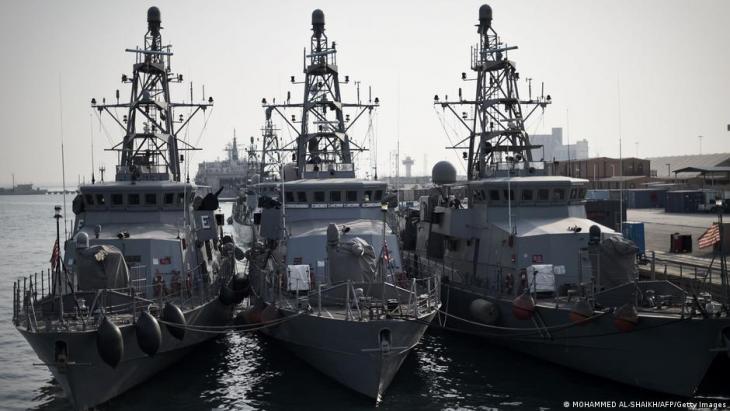 Partners of the West: "Bahrain is important because it is home to the most important U.S. naval base in the Persian Gulf," says Gulf states expert Guido Steinberg of the German Institute for International and Security Affairs in Berlin. Even though the U.S. government under Joe Biden has distanced itself from the Gulf states, this does not mean that the USA is taking a more critical approach to Bahrain. Great Britain also has a military base there, located near the capital Manama

A news report from the Bahrain News Agency says the Kingdom rejects accusations of human rights violations. Bahrain abides by the principles of human rights in compliance with the constitution and national laws, the report continues. With regard to the accusations concerning Bahrain’s treatment of detainees, the report claims among other things: "Bahrain boasts an exemplary record in the region and the Arab world in treating inmates, providing them with basic services, and rehabilitating them to facilitate their social integration." Besides, the report says, the prisoners repeatedly mentioned by the media are "convicted criminals and not prisoners of conscience".

Bahrain has robust backers in the region in the form of Saudi Arabia and the United Arab Emirates; it has signed a normalisation agreement with Israel.

But the nation also has partners in the West – among them the USA and the United Kingdom. Gulf States analyst Steinberg says that although the U.S. government under Joe Biden has distanced itself from the Gulf States, this does not signal a more critical U.S. stance towards Bahrain. "That’s down to geostrategic concerns. Bahrain is important because it hosts the most important U.S. naval base in the Persian Gulf."

If there should ever be a confrontation with Iran, this base is of crucial importance, says Steinberg. Britain also maintains a military base in Bahrain – to the south of the capital Manama.

Bahrain is currently attempting to demographically counteract the country’s Shia majority. The ruling dynasty wants to change the societal balance of the nation – not just by stripping Shias of their citizenship, but also by naturalising foreign Sunnis. "The rulers don’t want the Shias to have any political or religious influence whatsoever," says Steinberg. "Shia mosques have even been destroyed in the past." The government has ordered the destruction of more than 30 Shia mosques since 2011 – with no sign that these will ever be rebuilt.

Germany's foreign policy is explicitly values-based. But what happens, Ralf Bosen asks, when democracy, the rule of law and human rights collide with the logic of trade and ... END_OF_DOCUMENT_TOKEN_TO_BE_REPLACED

The rollout of coronavirus vaccines in the Middle East and North Africa is already taking place on a massive scale, with the United Arab Emirates leading the way. Nevertheless, ... END_OF_DOCUMENT_TOKEN_TO_BE_REPLACED

German Middle East analyst Guido Steinberg and television journalist Ulrich Tilgner have both published new books on the conflicts in the Middle East. Their analyses and their ... END_OF_DOCUMENT_TOKEN_TO_BE_REPLACED

Saudi Arabia and its allies have agreed to set aside their differences with Qatar at a summit meeting of the Gulf Cooperation Council. The restoration of diplomatic relations ... END_OF_DOCUMENT_TOKEN_TO_BE_REPLACED

Ten years after the start of the Arabellion in North Africa and the Middle East, many view the movement as a failure. But rather than being over, it has now entered a more mature ... END_OF_DOCUMENT_TOKEN_TO_BE_REPLACED
Author:
Diana Hodali
Date:
Mail:
Send via mail

END_OF_DOCUMENT_TOKEN_TO_BE_REPLACED
Social media
and networks
Subscribe to our
newsletter