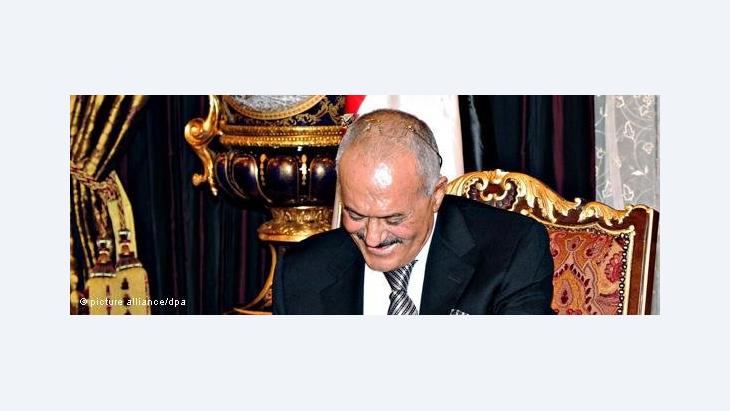 The international community would do itself and Yemen a service if it looked beyond the parameters set by the Gulf initiative, which was signed by the Yemeni president and representatives of the opposition in the Saudi capital, Riyadh, on 23 November 2011 writes Elham Manea

The Gulf initiative, which was issued on 21/22 May, was designed by the Gulf Cooperation Council and is meant to give Yemen a safe way out of its current explosive situation. It calls on the Yemeni president to delegate power to his vice president and set a 90-day period during which the vice president will call a presidential election.

It also makes sure that there will only be one candidate in this presidential election, namely the vice president, and stipulates that once the vice president gets "elected", he will be responsible for overseeing a period of transition.

The opposition will name its candidate for the position of prime minister, and a "national consensus government", which will be divided on a 50/50 basis between the government and the opposition, will be created. The government will have the authority to "disengage" the armed forces and their rival military forces and send them back to their camps. The government and the president will then convene a national dialogue conference, which will discuss Yemen's conflicts (including the southern question) in a manner that preserves the country's unity. 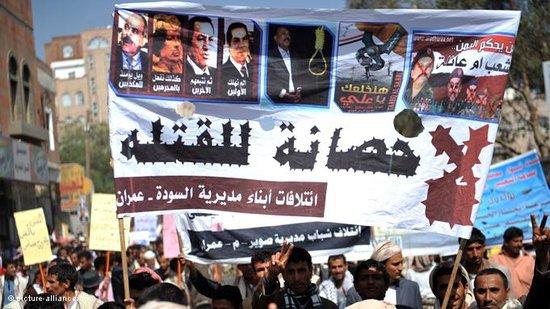 Yemeni protesters holding a banner that reads "No immunity for murderers" during a march demanding the trial of President Saleh in Sanaa; elsewhere in the country, however, the independence of South Yemen and not Saleh's future is the main objective

Welcome, but not really constructive

The initiative is certainly a welcome step towards defusing the crisis that has rattled the country for months and brought it to the brink of collapse. Nevertheless, its provisions have hardly captured the complexity of the Yemeni crisis and are not, therefore, conducive to achieving the desired outcome, i.e. bringing peace and stability to a unified Yemen. Put simply, the initiative puts the cart before the horse.

More specifically, the initiative treats the Yemeni crisis as a simple conflict between two fighting parties; it ignores serious developments on the ground and seeks to preserve the country's political status quo. One camp is represented by the president, his son, nephews and tribal allies. The other is represented by the "old" opposition in the form of the Joint Meeting Parties and their military allies.

The reality of the situation is somewhat different: the power struggle is between members of the very core elites, whose alliance over the last 30 years has enabled the president to remain in power. The state came to represent the interests of a dominant ethnic group (northern Zaydi Qahtani of the Hashid tribal confederation) and has become an ethnic bodyguard of the interests of the ruling elites.

Other social groups were pushed to accept the institutional reality of a state that has rarely considered them equal citizens. Moreover, the lack of solid institutional foundations made it possible for the "ethnicised" elites to hijack the state's institutions to their benefit. This complicates the matter because these core leaders, whose men are fighting in the streets of Sanaa today, control the army and security services.

Saleh will retain his influence

Children holding a placard that reads "the Arab revolutions will be victorious": Yemen has been rocked by protests, unrest and violence for many months now

​​In other words, changing the president or holding elections will not change the power equation of the Yemeni political system. The president will remain in control – even after stepping down – through his relatives, who control half the army and security services; just like his clan rivals, Ali Mohsen al Ahamar and the Al Ahmar family (not related to Ali Mohsen), who are in control of key army units and the tribal militia of the Al Ahmar family.

Given this power division and the lack of a decisive victory of one camp over the other, the provision that seeks to disengage military troops and "send them back to their camps" seems more like wishful thinking than a realistic goal.

Secondly, the initiative ignores very serious and worrying developments that are taking place in the southern part of Yemen and the northern region of Sadaa. Both the southern movement, with its fractured leadership, and the sectarian Zaydi Huthi movement supported the youth uprising when it began in February. However, the increasing influence of Salafists and Muslim Brotherhood Islamists in the sit-in camps has weathered this support.

In the last few months, there have been repeated demonstrations in the southern provinces. Yet the protesters were not calling for President Saleh to step down like their counterparts in Sanaa or Taiz were doing; they were waving the flags of the South and calling for South Yemen to separate from the North.

Concurrently, many reports indicate that the Huthi movement has turned northern Saada into a state within a state. Its troops have been fighting their way into neighbouring governances (Haja, Amran and Al Jawf). Some news reports indicate that this fighting is taking place with the blessing of the Yemeni president. Regardless of whether this is true or not, the fact is that there is sectarian fighting in these areas, and this fighting should not be confused with the fighting taking place in Sanaa and Taiz.

Moreover, both of the Southern and Huthi leaders have brushed the Gulf initiative aside, saying it is not valid and that the signing of the initiative is "none of their business". The Southern question and the Huthi sectarian conflict are integral parts of the Yemeni conflict. Ignoring them and not even including them in the 50/50 division of power in the government, as the provisions of the initiative do, will not make them go away.

According to Elham Manea, Saudi Arabia has an interest in preserving the old Yemeni system and hindering real political reforms in the country: President Saleh was a loyal ally and the kingdom does not want the people of Saudi Arabia to start demanding similar reforms

Finally, the initiative seems intent on keeping intact the status quo in the Yemeni political system. Saudi Arabia, which is the leading power behind the Gulf initiative, has an interest in preserving the old Yemeni system, whose leaders have been their trusted allies. It also has an interest in hindering real political reforms in the country, lest they encourage Saudi citizens to demand similar actions. This might explain the decision to replace the president with a vice president who is known to be a puppet of the current president. He was handpicked to safeguard the old system and will most certainly be a target for all parties involved.

The combination of these three reasons makes it clear that the initiative provides a "patchwork" solution that will fail to defuse the crisis both in the short and in the long term. What Yemen needs are serious steps that address the very core of its problems: the control of one ethnic group on the decision-making process, the exclusion of other regional, sectarian and tribal groups, the absence of a nation state that represents all segments of its population, the deficit in sound institutional foundations, and real democratic reforms that bring in the rule of law and hold its officials accountable.

The Gulf initiative may have been promoted with sincere intentions by the Gulf countries, which are rightly concerned that Yemen might yet slip into the abyss, but maintaining the status quo will only exacerbate the crisis, not diffuse it.

Dr Elham Manea is of dual nationality, Yemeni and Swiss. She works as an associate professor at the Institute of Political Science at Zurich University and specialises in the Middle East. She is also a writer and human rights activist.

Home
Print
Newsletter
More on this topic
Power Struggle in Yemen: A Yemeni Tribal AffairSaudi Arabia versus the Arab Spring: Stability at All CostsThe Demise of the Saleh Regime: The Sooner, the Better
Related Topics
All Topics
Date:
Mail:
Send via mail

END_OF_DOCUMENT_TOKEN_TO_BE_REPLACED
Social media
and networks
Subscribe to our
newsletter