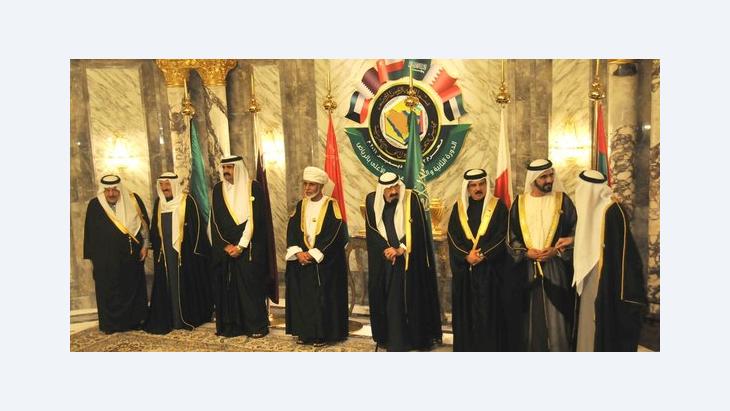 ﻿Far away from the attention of Western media, the oil-rich Gulf monarchies are currently trying to avoid being hit by the wave of uprisings and revolutions in North Africa and the Middle East. So far, they have not only been successful in doing so, they've even managed to exploit the uprisings for their own purposes. Matthias Sailer reports

﻿Unlike Tunisia, Egypt, Libya, Yemen or currently Syria, the governments which make up the Gulf Cooperation Council – aside from Bahrain – have been spared substantial unrest. These autocratic regimes – Saudi Arabia, the United Arab Emirates (UAE), Qatar, Bahrain, Oman and Kuwait – had from the start a better chance of survival than Mubarak, Ben Ali and Co. For one thing, as a result of their huge oil income, they were able to pacify their populations with material benefits such as jobs in the state sector or free health care.

And secondly, some of the sheikhs had used their oil money for wise investments and had won the respect of their people by so doing: in the UAE, for example, it is hard to find Emiratis who are so dissatisfied with their situation that they want to overthrow their rulers. This respect goes well beyond mere tribal loyalty.

But that doesn't mean that there aren't any problems. On the contrary, in the UAE, for example, rapid economic development has led to a massive immigration of guest workers, so that Emiratis only make up about 10 percent of the population.

In Oman, the political situation has stabilised following political and economic concessions made by the country's ruler, Sultan Qaboos. However, the challenge of finding jobs for the young Omani population is a big concern. Pictured: Protests in Muscat in 2011

​​The process has also led to an extreme level of materialism and the westernisation of daily life: in the country's numerous shopping malls, it's not exceptional to see women in full-body veils alongside long-legged blondes in hot-pants. For many citizens, this development has led to a thoroughgoing identity crisis.

Against this background, it is no surprise that there is criticism of the policies of some of the rulers. The criticism is strongest in those countries where the social and economic problems are greatest: in the little-known Sultanate of Oman, which doesn't have the kind of oil revenues that the UAE has, thousands took to the streets in February 2011 to demand better living conditions. In Bahrain – now also poor in oil revenues and with a Shiite majority which suffers from discrimination – the regime put down an uprising which began in February 2011.

Even in wealthy Saudi Arabia there have been smaller incidents of unrest in the Eastern Shiite parts of the country close to Bahrain which were promptly put down. In Kuwait, parliament put the Emir and the government under considerable pressure, and in November 2011, some 50,000 people took to the streets and forced the prime minister to resign after accusations of corruption.

The area's rulers are beginning to get worried. They don't want to take any risks which could end up with their suffering the same fate as the dictators in Egypt, Libya, and now Syria, in spite of their wealth. Even the Sheikhs of the UAE, who are relatively well-liked by the people, have begun to nip any political opposition or demand for greater political participation in the bud: according to the Emirates Center for Human Rights, there are currently 50 political prisoners in UAE jails. In July alone, at least 37 bloggers, writers, poets and lawyers were arrested. 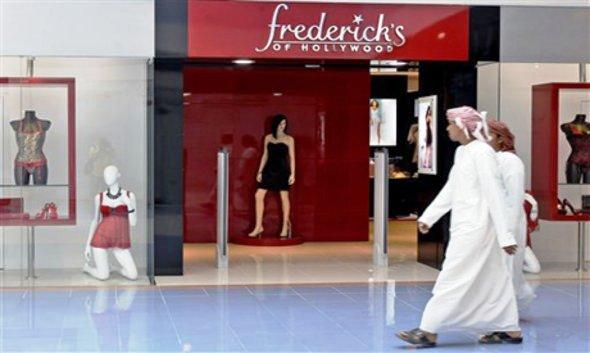 The rapid economic development has led to an extreme level of materialism and the westernisation of daily life in the Gulf States, says Matthias Sailer. "For many citizens, this has led to a thoroughgoing identity crisis," he writes

​​Some have already been deprived of their citizenship and deported. The state media justify such actions by pointing to the alleged membership in an organisation which has unconstitutional aims, threatens national security and is controlled from abroad. The reference is to Al-Islah, an Islamist group which is ideologically close to the Muslim Brotherhood. But the measures taken by the Gulf states go much further than that.

In May 2011, it became known that the UAE was cooperating with the founder of the US-based private security personnel company Blackwater to train Colombian mercenaries in the desert of Abu Dhabi. Such mercenaries are often deployed by authoritarian regimes, since they are less likely than local troops to have any compunction about confronting the people. Bahrain's regime too has recruited mainly Pakistani fighters to its security services.

Plenty of targets for religious criticism

Even the discussion about the unification of the tiny Emirate of Bahrain with Saudi Arabia might be seen as a preventive measure to gain better control over the anti-government protests which are forever breaking out there. The Gulf monarchies always describe such steps as preventive measures to counter the threat from Iran. 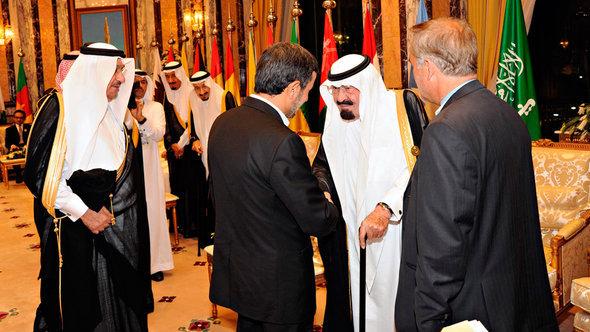 Saudi Arabia's King Abdullah (2nd from right) shakes hands with Iran's President Ahmadinejad at the opening ceremony of the Organisation of Islamic Conference (OIC) summit in Mecca August 14, 2012, before the OOIC suspends the membership of Iran's ally Syria. Shiite-majority Iran and the Sunni-dominated Gulf states are traditional rivals

​​In the end though, it is the fear of exported revolution, especially from Egypt – now partly ruled by the Muslim Brotherhood – which leads the Gulf states to take such action. Corruption, a westernised way of life and social injustices offer plenty of targets for religious criticism of the regimes. As a result, the attitude of the Gulf monarchies towards the states where revolutions have occurred is aggressive.

As recently as the end of July, the Dubai police chief, Dahi Khalfan, likened the Muslim Brotherhood to the country's arch-enemy, Iran: "The Brothers and their governments in North Africa must know that the Gulf is a red line – not just for Iran, but also for the Brothers. We have to be cautious and watchful, since the larger these groups become, the more likely it is that they will cause trouble."

Relations with Saudi Arabia are also tense. The latest escalation occurred in April, after the arrest of the Egyptian human rights lawyer Ahmed Al-Gizawi in Saudi Arabia. That led to demonstrations in front of the Saudi embassy in Cairo and the temporary withdrawal of the Saudi ambassador. Al-Gizawi was trying to get a case brought to court to win the freedom of some Egyptian guest workers who were being held in Saudi prisons without charge. He was arrested on arrival in the country on suspicion of drug-smuggling.

The case has become a major political issue. Now, the fear of exported revolution has become all the greater, with the democratic election of Mohammed Mursi as president putting the Muslim Brotherhood right at the levers of Egyptian power.

It's a dangerous situation for the Saudi royal house, since the Muslim Brotherhood has always claimed an active role for Islam in politics: ever since it began to be persecuted under Gamal Abdel Nasser in the mid-1950s, it always saw itself in opposition to the current regime, and the right to resist dictatorial rulers became part of its ideology. Things are different in Saudi Arabia: the ultra-conservative clergy enjoys manifold religious freedoms and is well-supported financially by the royal house. In exchange the clergy supports the authoritarian regime of the Al-Sauds almost unconditionally. 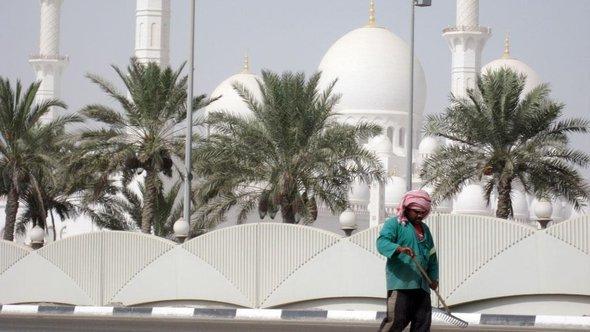 The Gulf monarchies have succeeded in making themselves even more important for Europe and the USA than they were anyway as a result of the financial crisis. Whether their combined strategy of financial generosity, chequebook diplomacy and repression will help them to survive will only emerge in the course of the next few years, writes Sailer

​​For example, the Saudi Grand Mufti usually condemns uprisings as un-Islamic. In April he told the Al-Watan newspaper, "The division, the instability, the poor security situation and the breaking up of the unity of the Muslim countries with which the Muslim states are currently confronted are the consequence of sin and of the fact that the public has gone too far."

For now though, the Egyptian Muslim Brotherhood has pulled its horns in and assured the Saudis that it has no plans to export the revolution to the Gulf. President Mursi is under extreme pressure and knows that he must show the Egyptians palpable social and economic improvements over the next few months. A conflict with Saudi Arabia would be poison for that endeavour: it would put the monthly remittances of the more than 1.7 million Egyptian guest workers (in 2011 they amounted to around $8 billion) at risk, and would make likely the postponement of the billions in aid from the Gulf states for which Egypt is hoping. Egypt, with its disastrous economic and financial situation, could not cope with that.

So the Gulf states are safe from exported revolution for the time being. They can also boast to their people about how they are supplying arms to the resistance fighters of the Free Syrian Army against the brutal regime of Bashar al-Assad, a close ally of the arch-enemy Iran. Whether this combined strategy of financial generosity, chequebook diplomacy and repression will help the Gulf regimes to survive in their current form will only emerge in the course of the next few years. The chances, at least in the short and medium term, seem to be good.

Arab youth express their hopes and wishes for the New Year, spanning everything from civil and political rights, to education, to arts and culture. By Rafiah Al Talei END_OF_DOCUMENT_TOKEN_TO_BE_REPLACED

With World Cup 2022 around the corner, Qatar has embarked on a campaign to clean up its school system. Distracting from grievous shortcomings in other areas by highlighting a ... END_OF_DOCUMENT_TOKEN_TO_BE_REPLACED

Moncef Marzouki was Tunisia's first democratically elected president after the fall of dictator Ben Ali. Today he is the most prominent critic of increasingly counter- ... END_OF_DOCUMENT_TOKEN_TO_BE_REPLACED

Asef Bayat, professor of Sociology at the University of Illinois, Urbana-Champaign, has been studying revolutions and how they affect people since 1979. In his recent book, " ... END_OF_DOCUMENT_TOKEN_TO_BE_REPLACED

The catastrophic human rights situation in Bahrain is being largely ignored by the rest of the world. Despite all the damning evidence, which includes a Human Rights Watch report ... END_OF_DOCUMENT_TOKEN_TO_BE_REPLACED

The city of Marib is the most important place of refuge in Yemen for those displaced in the country. But fighting between Houthi rebels and government troops is currently ... END_OF_DOCUMENT_TOKEN_TO_BE_REPLACED
Author:
Matthias Sailer
Date:
Mail:
Send via mail

END_OF_DOCUMENT_TOKEN_TO_BE_REPLACED
Social media
and networks
Subscribe to our
newsletter