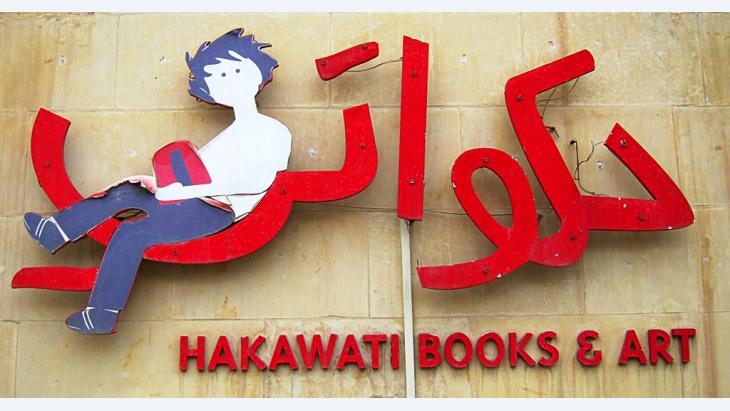 The Hakawati bookshop for children and young people in Amman

Since opening ten years ago, the Hakawati bookshop in Amman has become an institution in the Jordanian capital. Nowhere else in the city offers such a wealth of books for children and young people. Claudia Mende took a look around this fascinating shop

A young boy with a shock of unkempt hair sits on the bright red logo of the Hakawati bookshop. Hakawati, which is Arabic for storyteller, is the name of the only bookshop in Jordan that specialises in books for children and young people. The colourful logo at the entrance to the bookshop is a genuine eye-catcher on Mekka Street, a drab traffic artery in Amman's business district.

Hakawati wants to be more than just a bookshop. It sees itself as a place that fosters the creativity of youngsters, offering painting and handicraft activities and hosting storytelling events every Saturday that give schoolchildren the opportunity to present their own stories.

The shelves are packed with titles in English, French and Arabic, but the main focus is on Arabic literature. For the youngest readers, the store stocks picture books, read-and-learn books, touch-and-feel books and audio books on CD. Children aged six and above are offered a selection of books by authors from Egypt, Jordan, Lebanon and the United Arab Emirates.

Jordan is home to a number of well-known authors of children's books, such as Wafaa Taufiq al-Qoussous, Mohammed al-Zaher, Taghrid Najjar and Margo Malatjalian. The last two in particular are very popular with Jordanian readers, says Bayan Titi, the manager of Hakawati.

Taghrid Najjar, a Jordanian writer of Palestinian origin, has published a total of 40 books for children up to the age of ten. She lives in Amman and is the creator of a six-volume popular series called "the Halazone Series" about a six-year-old girl named Jude and her adventures. The series is illustrated by the Syrian Lujaina Al-Aseel. 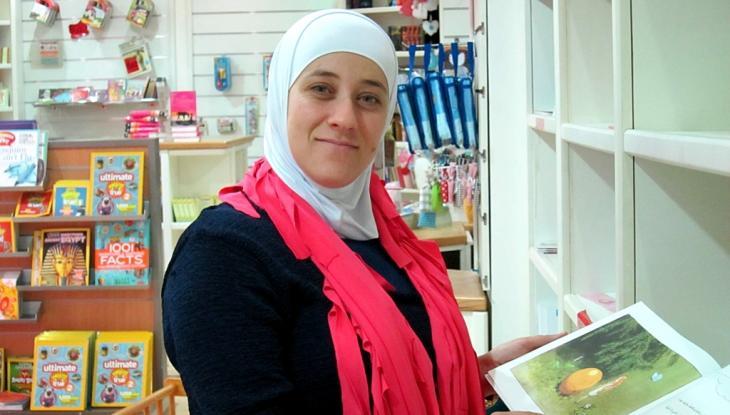 Bayan Titi (pictured here), manager of the Hakawati bookshop for children and young people, is passionate about books. Although the situation was rather bleak when the shop was founded ten years ago, much has happened on the Arabic-language children's book market in since then

Margo Malatjalian also lives in Amman. She was born in Jerusalem to an Armenian family and grew up in the southern Jordanian city of Kerak. Today, her books are read throughout the Arab world. In Saudi Arabia, her books are even on the curriculum of primary schools. In addition to children's literature, Malatjalian has also written numerous plays for children and was for a time a consultant for children's programming at Jordan TV.

Since Hakawati came into existence, there has been a great deal of movement on the Arab children's book market, asserts Bayan Titi. The manager of the bookshop exudes enthusiasm. "I am passionate about selling books," she says. Today, Arab publishers place considerably more emphasis on appealing illustrations, good quality paper and attractive book covers. Despite this, the book dealer still has a personal preference for translated foreign books. "I respect Arab authors," she says, "but perhaps they are sometimes just too anxious. In any case, they are not as creative as Western children's book authors."

Above all, many Swedish children's books have been translated into Arabic. Astrid Lindgren is hugely popular in Jordan. Pippi Longstocking is called "Jinan" in Arabic. Also popular with young readers are "Rasmus and the Vagabond" and "Mirabell."

But how is such a wild character like Pippi Longstocking received by the Arab public? After all, Pippi is a girl, she lives alone and she does whatever she likes. Arab children love Jinan and her anarchistic ways. The book is highly popular, says bookseller Bayan Titi. "Children love it. Only the schools don't like Pippi Longstocking. They find the red-haired Swedish girl too rebellious."

The large selection of Swedish children's books available here is largely due to the work of the native-born Jordanian Mouna Henning Zureikat, who has lived for many years in Sweden. Her Dar Al-Muna publishing company has translated around 130 Swedish children's books into Arabic since 1984. The Swedish books are extremely popular, but often considerably more expensive than locally produced books.

Readers would search in vain for characters that are as imaginative as Pippi/Jinan in the works of contemporary Arab authors. Nonetheless, there is a far greater selection of Arab children's books on the market now than there was ten years ago when Hakawati was founded. Many of these books even feature spirited young girls as their protagonists. This is rarely the case in books for young people, however. 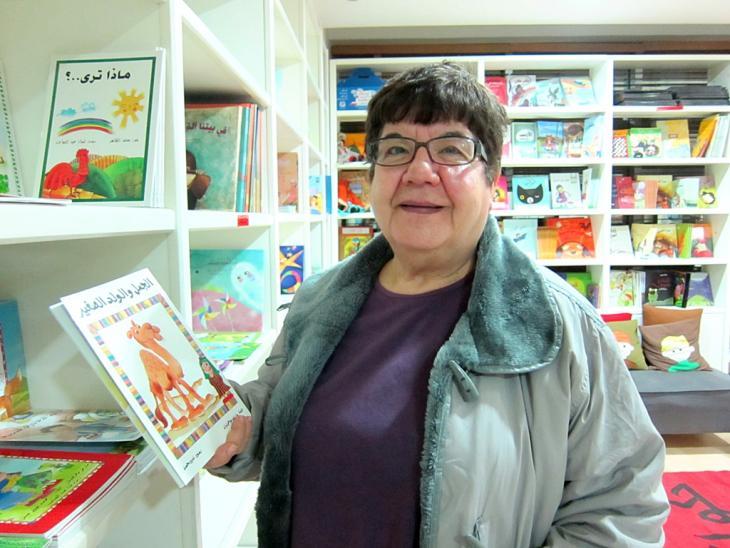 "It is difficult for authors to write about adventures when their young readers are not even permitted the freedom of going out and putting themselves to the test," says the well-known children's book author Margo Malatjalian (pictured here)

The Jordanian author Rana Azzoubi has published two novels for young people up to the age of 12, "Through the Mud Wall" (2007) and "Million Star Hotel" (2009), but both of these titles are available in English only. Yet in comparison to Western books for young people, the stories tend to be didactic and bland. She writes in English primarily because the Arab book market is so small. The market for English books is larger and that enables Azzoubi to sell her books to English language readers worldwide. Her books focus on themes relating to the cultural heritage and natural treasures of Jordan. Issues not to be found in Azzoubi's books include conflicts between children and parents, family trouble and unusual behaviour.

Why are so few books for young people written in Arabic? Margo Malatjalian has a plausible explanation: "after writing many books for young children, I also tried to write stories for young people," she says, "but I quickly let the project drop." The traditional themes in literature for young people are just too sensitive for the Arab world. These books deal with adventure, self-discovery, sexuality and first love. "When foreign authors write about such themes, it is perfectly all right," says Malatjalian. "But readers in the region expect Jordanian or Arab authors to avoid such themes."

Harry Potter novels, for example, are hugely popular in the Arab world. Yet, if an Arab author had created Harry Potter, reactions would certainly not have been so positive. Even adventure novels are not without their problems. "It is difficult for authors to write about adventures when their young readers are not even permitted the freedom of going out and putting themselves to the test." Malatjalian stresses that this is the case for both boys and girls. As an author, she simply cannot write something that is out of touch with her readers. "And, after all, I want to sell my books."

As a whole, the Arab world still reads far too little. "But this situation is slowly changing," says Bayan Titi hopefully. As a means of generating enthusiasm for reading, Hakawati has even organised parent reading sessions. There is a huge appetite for exciting stories.

They’ve already got the Louvre; they’ll soon have a Guggenheim Museum as well – and now the Emirates have added literature to their quest for cultural supremacy in the Arab world ... END_OF_DOCUMENT_TOKEN_TO_BE_REPLACED

The rollout of coronavirus vaccines in the Middle East and North Africa is already taking place on a massive scale, with the United Arab Emirates leading the way. Nevertheless, ... END_OF_DOCUMENT_TOKEN_TO_BE_REPLACED

Faced with a deteriorating economy and a discontented populace, Jordan's ruling family is feeling the pressure. END_OF_DOCUMENT_TOKEN_TO_BE_REPLACED

Founded in 1921 as a temporary solution, Jordan managed to establish itself as one of the most stable countries in the Middle East. The inclusive and flexible approach taken by ... END_OF_DOCUMENT_TOKEN_TO_BE_REPLACED

German Middle East analyst Guido Steinberg and television journalist Ulrich Tilgner have both published new books on the conflicts in the Middle East. Their analyses and their ... END_OF_DOCUMENT_TOKEN_TO_BE_REPLACED

END_OF_DOCUMENT_TOKEN_TO_BE_REPLACED
Social media
and networks
Subscribe to our
newsletter