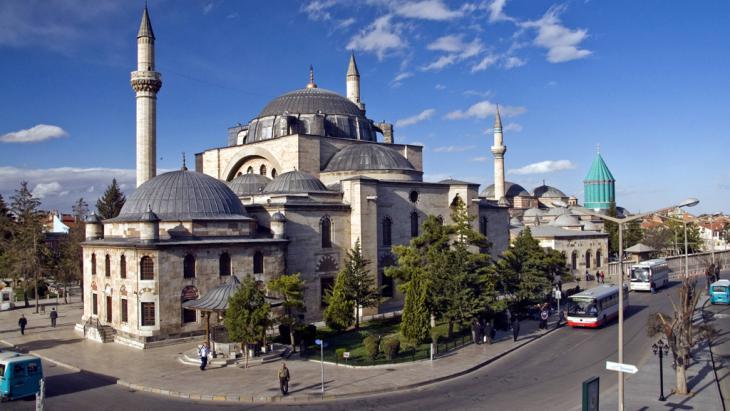 The hidden treasures of Sufism
In the footsteps of Rumi

Rumi's poems, though generally stripped of their Islamic symbolism, are hugely popular around the world. Yet Islamic mysticism is still very much at the heart of these verses. Marian Brehmer has spent more than ten years exploring the form Sufism assumes today. By Lisa Neal

"All the prophets and mystics were trying to do when they wrote their books was to wake you up to yourself,“ says Besmel, a dervish from Nosratabad in Iran. Today it almost seems easier to decide against a faith than to devote your life to a spiritual path. At least that would seem to be true for many people in north-western Europe, as evinced by diminishing church membership and the lack of young people in other religious communities.

Electing to follow a spiritual path requires being open to something greater than yourself, not to mention an intensive process of searching. This quest leads through an excess of potential lifestyle options, which may feel good, but remain largely superficial. It leads through entrenched institutions in which all too often structural conservatism becomes the measure of a good life. How can this search for truth ever be a success? In his book Der Schatz unter den Ruinen (Treasure Amid the Ruins) the journalist and practicing Sufi Marian Brehmer tells of his own quest and what he discovered. To do this, he follows in the footsteps of Rumi, the great mystic of Sufism.

The Islamic scholar and poet Jalal al-Din Rumi was born in 1207 in the central Asian region of Khorasan; his life took him through Afghanistan, Iran, Syria and to Turkey, where he died in Konya in the year 1273. Brehmer spent a decade visiting these four countries; his book charts these travels guided by the life of Rumi himself. Brehmer’s leitmotif is the question of what remains today of the spiritual culture of Sufism. His response: much more of it survives than we are led to believe by the international media, which tend to focus on negative headlines relating to these four nations. 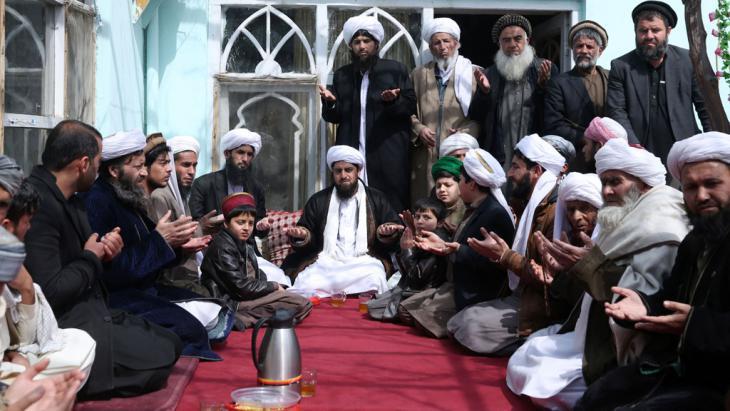 In Balkh, where Rumi was likely born, people no longer make much of a fuss about the mystic. The privations of the war years have suppressed Sufism in many places. What Brehmer was still able to find, exists less and less in Afghanistan. Orthodoxy and fanaticism prohibit Sufi practices

Forbidden in Afghanistan by orthodoxy and fanaticism

The book begins in Afghanistan. In Balkh, where Rumi was likely born, people no longer make much of a fuss about the mystic. The privations of the war years have suppressed Sufism in many places. A particularly special encounter takes place with the poet Haydari Wujudi. Brehmer meets him four months before the Sufi master’s death. "People like Wujudi have less of an effect through their words, and more through the presence behind their words,” writes Brehmer.

He speaks to Wujudi and his seminarians about Rumi’s poetry. The latter’s chief work is by no means a concrete set of instructions, but rather consists of a collection of poems. Rumi’s seminal work, known as the Masnavi, comprises six books with just under 26,000 verses that drip feed subtle pearls of wisdom. Rather than try and win people over through argument, Islamic scholar Rumi attempted to open hearts through poetry verses and help people find their capacity for love. After all, in Wujudi’s view, only "love leads people to true freedom”.

What Brehmer was still able to find, exists less and less in Afghanistan. Orthodoxy and fanaticism prohibit Sufi practices. It is a similar situation regarding Brehmer’s experiences in Syria. Here, he becomes acquainted with a community of Sufis whose lives had been destroyed by war. Brehmer’s trip to Syria in 2009 was his first to the Middle East. Here, he encountered everyday Muslim spirituality, residing for a short time in the (now-destroyed) Al-Adiliyah Mosque in Aleppo. He was permitted to take part in the dhikr, the rhythmic recitation ritual:

"We stand in three circles. Hand in hand with my neighbour and a hundred other men I sway faster and faster to the rhythm of the recitation…the phrase `Lā illaha il Allah‘ – the negation of everything besides God – pulls me into the experience of divine unity.“

More scope for mystical expression in Iran and Turkey

In Iran and in Turkey, the other two countries on Brehmer’s journey, Sufis are also marginalised. Nevertheless, mystical Islam finds more scope for expression here. 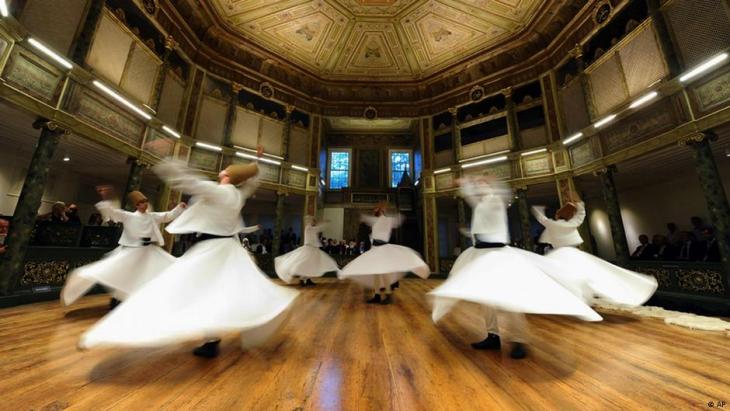 Dancing dervishes in Istanbul: in part, this spiritual dance has degenerated into a spectacle for tourists, just as the Rumi poems today are mostly stripped of their Islamic symbolism, as Marian Brehmer criticises. Some is lost in translation; but it is also because – due to the one-sided image of Islam in the world – people dispute whether the religion could ever produce a person such as Rumi. "By declaring him a secular humanist, we cloud the view of the real Rumi and obstruct ourselves from gaining a more profound access to his teachings,” says Brehmer, in clear rejection of any purely feel-good spirituality

In Iran, Brehmer takes part in a course on Rumi’s Masnavi, originally written in Persian. From that point on, Brehmer is certain: this is what he has been searching for, the transformative power of the verses reaches his very core. He meets among others the dervish Besmel and visits a clandestine Sufi meeting in a wealthy Tehran neighbourhood. Rumi’s poems are hugely popular in Iran, but devout practicing Sufi orders are forced to operate in the shadows. The fact that people are reading the Masnavi could be seen as a sign that many Iranians are weary of ideologised Islam. Another reason is that poetry plays a significant role in Iranian self-perception.

The book closes, just like Rumi’s life, in Turkey, where Brehmer now lives. There he meets Sufi practitioners such as Hayat Nur Artiran, one of the few women leading a Sufi order. It was in Konya that Rumi met his spiritual master and companion Shams Tabrizi. Through the pain of separation from him (Shams Tabrizi disappeared one day), Rumi’s heart opened up so much that he was able to dedicate himself to eternal oneness with God and write the Masnavi.

But, as Brehmer says, the Rumi poems coursing commercially throughout the world today are mostly deprived of their Islamic symbolism. Some of it is lost in translation; but it is also because – due to the one-sided image of Islam in the world – people dispute whether the religion could ever produce a person such as Rumi, says Brehmer. "By declaring him a secular humanist, we cloud our view of the real Rumi and prevent ourselves from gaining more profound access to his teachings,” Brehmer continues, in clear rejection of any purely feel-good spirituality.

Sufism comes alive through the diversity of those who practice it. The strength of this travel report lies in how it makes this diversity tangible. Brehmer has managed to produce a cliche-free, narrative work of non-fiction about places – some of which no longer exist today – and about encounters inaccessible to many. At the same time, the book is a gentle introduction to Sufism. The author blends his external and internal journeys, providing a possible answer to the question of how a spiritual life can unfurl.

Home
Print
Newsletter
More on this topic
Saints of Islam: Capturing the light of sagesIslamic mysticism: A flute like the breath of God "This Pale" – Rumi set to music: A celebration of the complexity of love
Related Topics
Book reviews, Dialogue of Religions, Islam and the West, Islam in Central Asia, Mysticism | Sufism, Orientalism, Radicalisation, Travels in the Orient, Wahhabism
All Topics

Very different Western reactions to the suffering in Ukraine and the Arab world show that there is a profound rift among cultures. Essay by Michael Young END_OF_DOCUMENT_TOKEN_TO_BE_REPLACED

The documentary "Nadia" tells the incredible story of Nadia Nadim, who was forced to flee from the Taliban as a child and became a football star. By Annabelle Steffes-Halmer END_OF_DOCUMENT_TOKEN_TO_BE_REPLACED

Three award-winning female directors appeal to the international film industry to save Afghan cinema. Supporting women filmmakers is more important than ever. By Christine Lehnen END_OF_DOCUMENT_TOKEN_TO_BE_REPLACED

Russia's ranking on the World Press Freedom Index has fallen again over the Kremlin's wartime censorship of the Ukraine conflict. From Myanmar to Mexico, journalists continue to ... END_OF_DOCUMENT_TOKEN_TO_BE_REPLACED

END_OF_DOCUMENT_TOKEN_TO_BE_REPLACED
Social media
and networks
Subscribe to our
newsletter