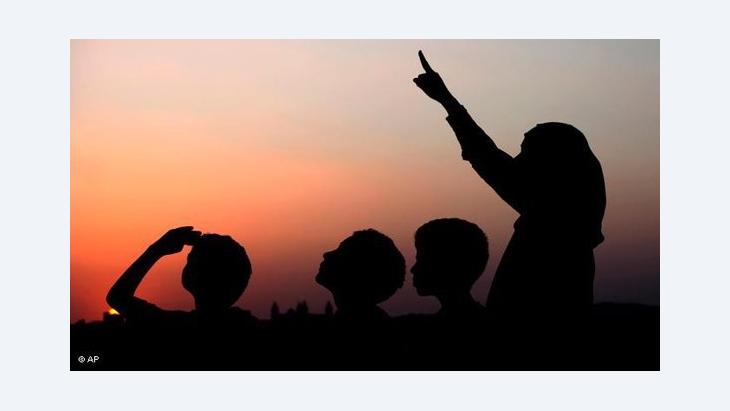 The Holy Month of Ramadan

To Fast or Not to Fast

None of the five pillars of Islam is observed by as many Muslims as fasting in Ramadan. Some people who don't otherwise obey any religious rules fast; others make a conscious decision not to. Stephanie Doetzer spoke to a number of Muslims who have decided not to fast

He started fasting when he was eleven and stopped when he turned 31. Wael comes from one of Cairo's conservative suburbs and from a family where fasting in Ramadan was taken for granted. But this year is his third Ramadan without it. "The last couple of years before I finally decided I wasn't going to fast anymore, I'd be less strict about it. I sometimes took a day off from fasting. But then when I finally stopped, no one knew, except my wife," say Wael.

"I'd feel self-conscious about people knowing. It would raise too many questions: 'Wael, what has happened to your faith?' People would give unsolicited sermons about Islam, and I have no stomach for that. If I'm asked straight out, I try to come up with an answer that doesn't involve lying."

The vast majority of non-fasters who were born in Muslim families and still live in the Arab world abide by that one rule: not fasting is something that shouldn't be talked about. In some cases, the reasons for hiding it are obvious: many perceive their own version of Ramadan as a sin and a personal flaw. Few go as far as to question the very idea of fasting. 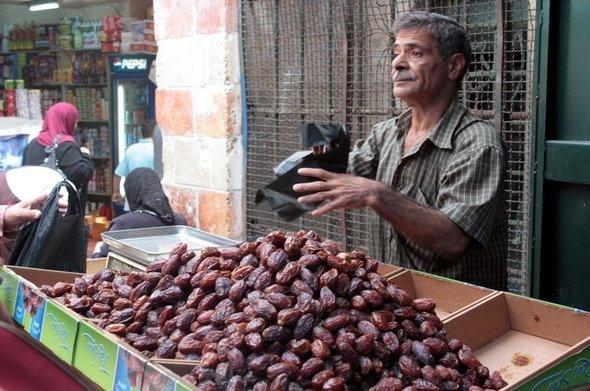 Many Muslims who make a conscious decision not to fast develop strategies to make sure that the people around them don't notice: a sip of water here to keep headaches at bay; a biscuit there to stave off the hunger pangs

A ritual for the whole community

Mahmud, a 25-year-old Afghan living in Doha, stopped fasting during his teenage years. When he talks about Ramadan, however, it sounds as if he had to defend the concept even more passionately than a practising Muslim. "We are supposed to feel for those who are hungry every day. Whether you're a billionaire or a beggar, whether you're from Afghanistan or Somalia: you're doing the same thing. It's a ritual that brings people together as one big community", says Mahmud empathically.

His own lack of fasting has more to do with pragmatism, though. He says he can't stand being hungry and only keeps fasting when he's with his family – a family that conveniently lives thousands of kilometres away in Kabul, that is. Mahmud doesn't pray regularly, drinks alcohol and has pre-marital relationships, but he insists that Ramadan is "the one thing that keeps you a Muslim". "It is definitely a religious obligation. If someone says it's not part of religion, that is a huge sin. It's a much bigger sin than to deny what you're supposed to be doing rather than not doing it. I admit to a weakness and I admire those who fast," says Mahmud.

These days, he volunteers for night shifts at work to avoid having to hide in the bathroom for his daylight snacks. When he is surrounded by practising Muslims, he makes sure to act just like them. "Sometimes this is so tiring that when it comes to iftar, I look just as desperate as those who're fasting", he says. "I don't think anyone would ever suspect that I'm not."

Those who secretly resort to sips of water and undercover biscuits are usually dealt with indulgently. If one of them is caught in the act, the person who discovers them tends to have excuses at the ready: she's probably got her period or he's probably suffering from kidney problems or diabetes. "Interestingly enough, it is socially completely acceptable not to fast for medical reasons", says Wael. "That doesn't threaten the community and it doesn't call the ritual as such into question." 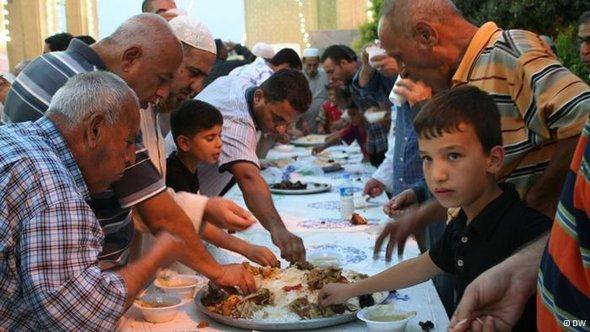 One person who doesn't observe the fast told Stephanie Doetzer that fasting "is definitely a religious obligation. If someone says it's not part of religion, that is a huge sin. It's a much bigger sin than to deny what you're supposed to be doing rather than not doing it."

Not fasting: a social taboo

The social taboo comes into play when a person has no medical reason whatsoever not to fast and views not fasting as a matter of personal choice. "I remember one day my mother told us – in horror – that she had seen our neighbour eating in his garden. She said: 'He is a healthy, grown-up man! How come he's too weak to fast?' It would never occur to her that he may not be fasting simply because he has doubts about religion."

This where Wael's approach to Ramadan is fundamentally different from Mahmud's: while the latter would like to fast, Wael says he doesn't see the point of it. Not any more. "They say fasting helps to develop inner strength, that it brings you closer to God and that it teaches us to feel for the poor. These are the rationalizations of the ritual, but I think all those things can be developed in many different ways without fasting." Wael usually keeps these thoughts to himself. To him, not fasting is an individual choice, but a very private one.

For Ibtissame Lachgar, a 39-year-old psychotherapist from Rabat, this is not the case; she's one of the few people who speaks publicly about the subject and for whom not fasting has a political dimension too. ﻿﻿Lachgar is one of two founders of a group called Mouvement alternatif pour les libertés individuelles (MALI), an organization that says it wants to fight for more individual rights in Morocco,  among them the right to eat wherever and whenever a person wants – even during Ramadan. According to Moroccan law, publicly breaking the fast is punishable by up to six months in prison.

"They claim that 99 per cent of Moroccans fast. Officially, the 1 per cent who don't are Moroccan Jews, the only religious community that is recognized by the state", says Lachgar. "But among the 99 per cent who allegedly fast, there are lots of agnostics, atheists and Moroccans who have converted to other religions." 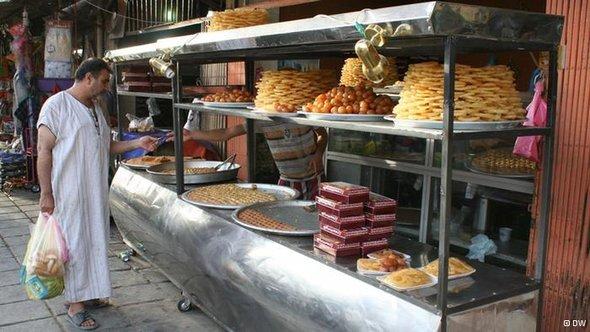 The politicization of Ramadan? In Morocco, an organization known as MALI, which is fighting for individual rights, caused a stir when it organized a public picnic during Ramadan; the organizers were arrested before they got to eat anything

During Ramadan 2009, MALI activists announced on the Internet that they would publicly break the fast in a town between Rabat and Casablanca – away from passers-by, but still in public space. In the end, they never got to eat their sandwiches: about a hundred policemen were deployed to arrest them right at the train station. When the story turned into a public debate, Lachgar received both death threats and hate mail, but also a lot of support from Muslims who said they want fasting to be a matter of faith, not social control.

"What I find appalling is that a public institution like the police turns into a 'moral police'. If it's acceptable that the state monitors fasting in Ramadan, it would only be consistent if they also tried to control prayer and all other pillars of Islam. Thank God that's not where we're at in Morocco. But if it ever happens, we'll have turned into Saudi Arabia!", she says.

While many Arab countries have laws that make it compulsory to publicy abstain from eating during Ramadan, only a tiny minority of people across the region speak out against them. Most Moroccan media covering MALI's picnicking plans called it an "unnecessary provocation", some an outright attack on Islam. And many would ask: aren't there any more important problems to deal with?

"I take that point", says Lachgar, "but when people say there are other priorities, then why is somebody who doesn't fast treated like a criminal and viewed with more contempt than a real offender?"

One thing is certain: social pressure to fast has risen over the past two decades. Not observing Ramadan is now a more subversive act then it used to be. "In the mid-1990s", recalls Wael, "there were some guys in my village who would smoke publicly in Ramadan to show how manly they were. It was not only that they were so attached to cigarettes that they couldn't quit, but also that they were rebel enough to break the rules and endure the horrified looks of people in the neighbourhood." 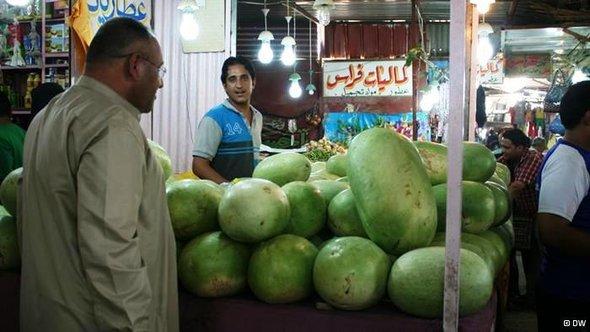 "One thing is certain: social pressure to fast has risen over the past two decades. Not observing Ramadan is now a more subversive act then it used to be," writes Stephanie Doetzer

How big of a social taboo it is differs from one country to another and one social network to another: while it's easy to find non-fasting Iraqis in exile, non-fasting Egyptians are a rare occurrence. Wael doesn't know of anyone in his surroundings except himself, not counting his non-Muslim friends.

Ibtissame Lachgar, on the other hand, is surrounded by quite a lot of Moroccan non-fasters. But all of them tend to feel out of place in their own society when Ramadan starts. "Religious identity is closely linked to the national, the entire collective identity. A Moroccan who doesn't consider himself Muslim is seen as a traitor to the entire community and the entire nation", she says. "It turns you into an apostate." This is why Wael's alienation from Ramadan is more than just breaking a rule. It's leaving behind an identity.

Home
Print
Newsletter
More on this topic
Morocco: Activists Fight for Right to Eat during RamadanRamadan in Germany: A Test of Faith and Strength of CharacterKristiane Backer on Ramadan: Fasting from Anger, Impatience and NegativityMuslim Professional Footballers during Ramadan: To Fast or Not to Fast?
Related Topics
Ramadan
All Topics

Recep Tayyip Erdogan, disappointed by the European Union’s reluctance to integrate Turkey into its ranks, has re-directed his country’s diplomacy toward the Maghreb and Africa to ... END_OF_DOCUMENT_TOKEN_TO_BE_REPLACED

The Egyptian series "El-Ekhteyar 2" was created by a production company with close ties to the military – and pursues a corresponding narrative. Moritz Baumstieger explains how ... END_OF_DOCUMENT_TOKEN_TO_BE_REPLACED

Looking to mobilise the Egyptians, Abdul Fattah al-Sisi and his ministers will refer to them as the "people". As soon as the Egyptians demand something of the state, however, they ... END_OF_DOCUMENT_TOKEN_TO_BE_REPLACED

The rollout of coronavirus vaccines in the Middle East and North Africa is already taking place on a massive scale, with the United Arab Emirates leading the way. Nevertheless, ... END_OF_DOCUMENT_TOKEN_TO_BE_REPLACED

Egyptian singer Umm Kulthum continuous to be an icon, almost 100 years after she published her first record. But what about the other famous women of the 1920s? In his new book, ... END_OF_DOCUMENT_TOKEN_TO_BE_REPLACED
Author:
Stephanie Doetzer
Date:
Mail:
Send via mail

END_OF_DOCUMENT_TOKEN_TO_BE_REPLACED
Social media
and networks
Subscribe to our
newsletter