Egyptian President Abdul Fattah al-Sisi has ruled with an iron fist for five years, jailing all those who publicly contradict him, tolerating no opposition whatsoever and quashing all those who attempt it. "Worse than Mubarak," the four journalists agree. None of them are allowed to publish anything at the moment.

Early on in the Egyptian uprising, there were also plenty of million-man marches like the one in Baghdad today. The inhabitants of this nation on the Nile took to the streets in their masses. Mubarak stepped down after just two weeks. On this point, the Egyptians have one over the Iraqis. In Baghdad on the other hand, Prime Minister Adel Abdul Mahdi and his government may have officially resigned after eight weeks, but he is stubbornly holding onto power until the next government is formed, something that is unlikely to happen anytime soon.

Nora is surprised to hear that the Iraqis have adopted symbols from the Egyptian rebellion: T-shirts with similar slogans and the date that the uprising began, scarves in the national colours, gallows with dolls hanging from them, or photos of individuals the demonstrators want to see the back of. The past enthusiasm of the Egyptians lives on in the Iraqis of today, the hope that they can bring about change, the self-confidence to control their own destiny. 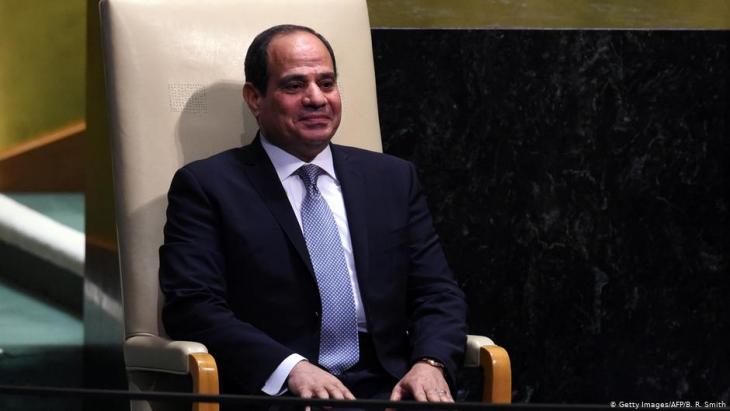 The dictator's iron grip: Abdul Fattah al-Sisi, former commander-in-chief of the Egyptian armed forces, has held the office of President of Egypt since June 2014. He seized power during a military coup d'etat. Since then, freedom of speech and assembly has been severely restricted. The human rights organisation Human Rights Watch estimates that there have already been more than 60,000 arrests for political reasons since Sisi took office in 2014

The era of animated discussions, an enormous politicisation of society, genuine dialogue and fruitful exchange has been transported from Cairo to Baghdad. Today in Cairo no one talks about politics anymore, without checking who might be listening or immediately falling silent. "Ali: Fear Eats the Soul", was the title of a 1970s film by Rainer Werner Fassbinder. This is highly pertinent to the current situation on the Nile.

One thousand three hundred kilometres away from Tahrir Square in Cairo, people stand in the pouring rain and wait. No, an Arab Spring 2.0, as the Egyptians say, is not what's happening in Baghdad and southern Iraq. They call their uprising the October Revolution, because it began on 1 October with the issuing of an ultimatum to the government to stand down, to then start up again three weeks later with twice as much fury, because nothing had happened in the meantime.

Now, Tahrir Square and the streets that surround it are a sea of tents. For months, the protesters blocked traffic on three bridges over the Tigris, occupying half of each of them. Security forces tried in vain on several occasions to battle their way through.

Only after the intervention of the Shia cleric Muqtada al-Sadr, which is dividing the protest movement, did security forces succeed in fighting their way through one of the blocked bridges. They also managed to force occupiers off the expressway to the east of Tahrir Square. 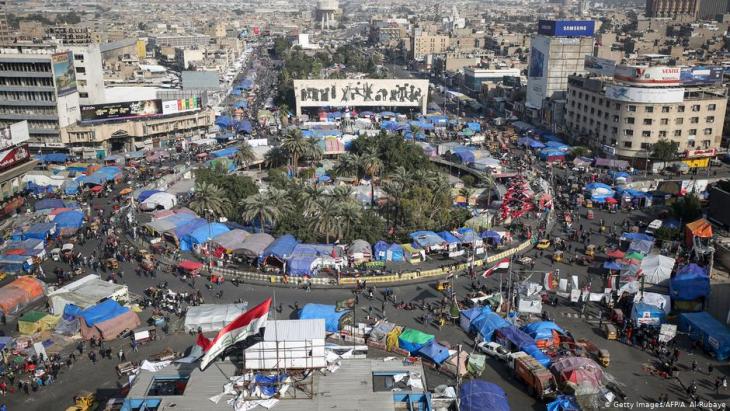 The re-awakened spirit of Tahrir: in Baghdad, a tent city has sprung up that extends far beyond the square and spreads out in all directions. Three bridges over the Tigris River were blocked for months by protesters and half of each bridge was occupied. Several attempts by the security forces to regain control of them failed

The battles are taking place every day; and every metre counts. Both parties are resorting to harsher means. As far as security forces are concerned, they are no longer just using tear gas and sirens but now also deadly ammunition and snipers. The demonstrators are also using more dangerous weapons. Whereas in the early phase they used rubber slingshots to throw stones and fireworks at their uniformed opponents, there is now an increasing number of Molotov cocktails in evidence. Almost 500 people have now lost their lives in these protest rallies in Iraq.

The village of Vakıflı in the southern Turkish province of Hatay near the Syrian border, population 150, is the last remaining Armenian village in Turkey. Lately, interest in the ... END_OF_DOCUMENT_TOKEN_TO_BE_REPLACED

Social media make many things possible – including the unwanted circulation of intimate private photos. This has given rise to new forms of crime and sexual blackmail. An ... END_OF_DOCUMENT_TOKEN_TO_BE_REPLACED

The change in U.S. president is also having an impact on the conflict between Turkey and Greece. Since the USA has started to play the Greek card, the strategic situation in the ... END_OF_DOCUMENT_TOKEN_TO_BE_REPLACED

Arab women played a leading role in the protest movement of 2011. Since then, ongoing social transformation has had a considerable impact on their lives. What is their assessment ... END_OF_DOCUMENT_TOKEN_TO_BE_REPLACED

They’ve already got the Louvre; they’ll soon have a Guggenheim Museum as well – and now the Emirates have added literature to their quest for cultural supremacy in the Arab world ... END_OF_DOCUMENT_TOKEN_TO_BE_REPLACED

Years in the making, Sisi's elite New Administrative Capital will isolate most Egyptians from their centres of government in an effort to fortify the regime against any social ... END_OF_DOCUMENT_TOKEN_TO_BE_REPLACED
Author:
Birgit Svensson
Date:
Mail:
Send via mail

END_OF_DOCUMENT_TOKEN_TO_BE_REPLACED
Social media
and networks
Subscribe to our
newsletter