The same scenario played out in Cairo nine years ago. Bloody battles raged in the side streets off Tahrir Square. Mohammed Mahmoud Street is a case in point. For days, it was the scene of heavy clashes between demonstrators and security forces. The official death toll is 846. A court later found Hosni Mubarak responsible for the loss of life.

In actual fact, say Alaa and Abdal Galil, the number of dead was more than 1,000. Later then, in August 2013, more than 130 people were killed when the Egyptian security offices brutally dispersed a large-scale sit-in on Rabaa al-Adawiya Square in front of the eponymous mosque in support of their ousted President Mohammed Morsi. Responsibility for this massacre lies however with the current president, who was commander of the Egyptian army at the time.

Remarkably, Sisi secured the approval of his compatriots for this brutal action by calling on them to come to Tahrir Square and thereby vote with their feet on whether he should take measures against the Muslim Brotherhood and its "terror", as he called it. People streamed onto the square in their masses, cheering Sisi and singing the national anthem.

Noor's father was subsequently killed on Rabaa al-Adawiya Square; her brother has been imprisoned without trial for months. For Philip Hanna of the Goethe Institute in Cairo, this is one of the reasons why more people are not protesting against Sisi at present; that despite increasing levels of disaffection, they are not showing it. They feel a certain sense of shame that they approved the bloodshed at the time; that they were in some way complicit.

So what was once an iconic site, Tahrir Square in Cairo, has become a place best ignored. Whereas nine years ago, the square was the epicentre of the movement and set pulses racing among Egyptians and pro-revolutionary visitors, today it leads a Cinderella-like existence; best kept out of sight and therefore out of mind. 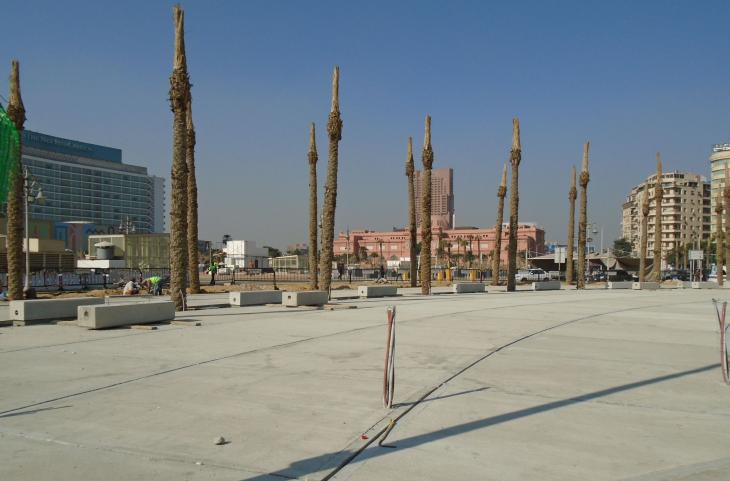 Tahrir Square in Cairo – cast in concrete: once the epicentre of the Arabellion, Tahrir Square has become a place best ignored. Construction workers are still there, eliminating what remains of past events. The paving stones are being removed and replaced by cement. After all, people may have the same ideas again and use them as projectiles against the security forces

Construction workers are still there, eliminating what remains of past events. The paving stones are being removed and replaced by cement. After all, people may have the same ideas again and use them as projectiles against the security forces. Just as in late September in Egypt, when hundreds took to the streets against Sisi and 2,000 people were arrested.

In Baghdad, the magic of Tahrir Square has not yet been extinguished, although the demonstrators here also suspect that ultimately, they have no chance of achieving their goals. The burned-out tents have already been replaced, a solidarity rally attended by thousands of students encourages the campers to hold out. After all, here on the Tigris, it is not the movement itself that is being crushed under the weight of demoralising dispute as it did in Cairo, where everyone wanted to be leader and ensured he was acclaimed as such.

Three months after the start of protests in Baghdad, there is still no leader. And for good reason. "They'll either be bribed and their silence bought for huge sums," says Sarah, a medical student distributing food on the square. "Or they'll be killed immediately."

And even if there were leaders, they would not be named. No, the dispute that is grinding down the movement in Iraq is the conflict between the U.S. and Iran. Iran, a nation that is currently doing everything within its power not to lose influence in Iraq. And for its part, the U.S. is doing everything it can to push back that very same influence.

Sarah comes every Friday bringing those still on Tahrir Square some of the things they need: blankets, rain jackets, umbrellas, food. This time, she's brought a small wood-fired oven from home.

The Baghdad nights are cold right now. The thermometer reading is just four degrees. "Tahrir is a sacred place," she says, but she's not talking about the Iraqi Christians' tent affixed with a photo montage of the square protected by the hand of Mary. She's thinking much more of recent events, that the square has remained largely untouched after days of raging battles all around it. An oasis for mostly young Iraqis dreaming of a better future.

Egyptian singer Umm Kulthum continuous to be an icon, almost 100 years after she published her first record. But what about the other famous women of the 1920s? In his new book, ... END_OF_DOCUMENT_TOKEN_TO_BE_REPLACED

The Prophet Muhammad never executed anyone for apostasy, nor encouraged his followers to do so. Nor is criminalising sacrilege based on Islam’s main sacred text, the Koran. In ... END_OF_DOCUMENT_TOKEN_TO_BE_REPLACED

Archaeologists have uncovered the remains of an ancient city in the desert outside Luxor in Egypt. They say it dates back to the golden age of the Pharaohs more than 3,000 years ... END_OF_DOCUMENT_TOKEN_TO_BE_REPLACED

Surging coronavirus cases in many parts of the world have overshadowed the start of this year's Muslim holy month of Ramadan, with festivities once again curtailed by contagion ... END_OF_DOCUMENT_TOKEN_TO_BE_REPLACED

German Middle East analyst Guido Steinberg and television journalist Ulrich Tilgner have both published new books on the conflicts in the Middle East. Their analyses and their ... END_OF_DOCUMENT_TOKEN_TO_BE_REPLACED

Televised Turkish dramas are all the rage in the Middle East. A young Ottoman TV Empire has been expanding its soft power by harnessing regional dialects, Arabic names and viewers ... END_OF_DOCUMENT_TOKEN_TO_BE_REPLACED
Author:
Birgit Svensson
Date:
Mail:
Send via mail

END_OF_DOCUMENT_TOKEN_TO_BE_REPLACED
Social media
and networks
Subscribe to our
newsletter