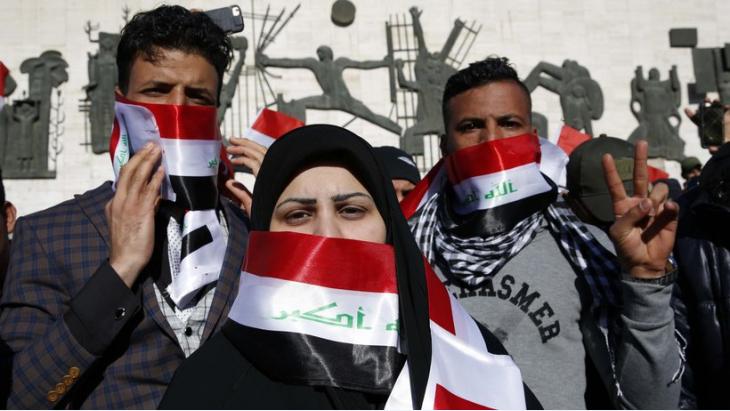 The past enthusiasm of the Egyptians lives on in the Iraqis of today. But just as they were nine years ago in Cairo, current prospects in Baghdad are dim. A comparison by Birgit Svensson

The demonstration against the presence of U.S. troops in Iraq wasn't attended by a million people, but thousands. Protesters marched along the left bank of the Tigris as far as the entrance to Baghdad University. The Shia cleric Muqtada al-Sadr had issued calls for a "million-man march".

"Americans out of my country" was one of the slogans on the protesters' banners. The killing of the Iranian General Qassem Soleimani on 3 January at Baghdad airport by an American drone had in any case further stoked anti-U.S. sentiment in Iraq. Whereas previously, resentment concerning foreign influence in Iraq had been aimed primarily at Iran, now that criticism is being levelled at the United States. The Iraqis fear that they are increasingly finding themselves between the frontlines of the Washington-Tehran conflict and that they are being crushed in the process.

All means are currently being deployed to break the protest movement in Iraq. Abductions, the targeted killings of activists, threats against their families, raids of their homes. Journalists who report on the protests are harassed and detained, the studios of opposition TV studios are destroyed and equipment rendered useless. The most recent example of such repressive measures is the abduction of four staff at a French, Christian NGO in Baghdad – three French citizens and one Iraqi.

The divisive figure of Muqtada al-Sadr

Muqtada al-Sadr's million-man march was also aimed at weakening the movement by dividing it. Whereas the cleric placed himself at the helm of the movement when the demonstrations began in October and supported their aims, he is now seen as a divisive force.

Al-Sadr is no longer saying that all foreign troops should leave Iraq, in line with demands by the people on Tahrir Square in Baghdad. Photos are being circulated showing him alongside Soleimani and the Iranian Supreme Leader Ayatollah Khamenei. His position is now clear. He has distanced himself from the demonstrators on Tahrir Square, and they from him. 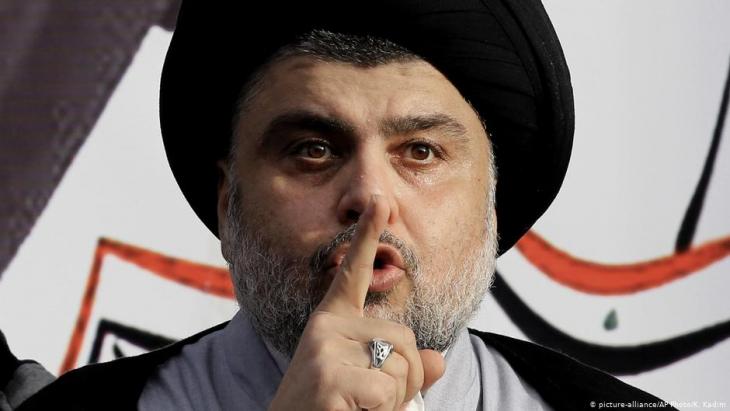 The agitator and divider: Iraq's influential Shia preacher Muqtada al-Sadr is one of the most powerful politicians in Iraq, yet his followers turned their backs on the Tahrir protest movement. Instead, they recently took to the streets in their thousands to demonstrate against the withdrawal of U.S. troops from Iraq. Earlier this month, the Iraqi parliament decided that all foreign troops would have to leave the country

Now the security forces are striking back in brutal fashion, after Sadr terminated his support for the protests. Thirteen people died within 24 hours, the tents on Tahrir Square are burning. Officials are firing live ammunition. They are under orders to break up the protest camp.

The Arabellion moves from Cairo to Baghdad

The four journalists didn't really want to meet at the proposed venue in a side street off Tahrir Square in Cairo. "We have to expect that we could be arrested at any moment," they said. But then they did appear, in Café Riche, where as a student Saddam Hussein drank his tea and gathered with sympathisers of the Ba'ath Party, of which he was the founder and which later brought him to power.

"It was a dream," says Nora and Noor, Alaa and Abdal Galil, what began on 26 January 2011 and became known as the ultimate Arab Spring. An uprising of the young against long-time ruler Hosni Mubarak, "our revolution" as they are still calling it.

They only reluctantly accept that their protest was not a revolution at all, because it didn't change anything, didn't usher in a regime change, didn't alter the system. Sometimes it's difficult to admit the truth. Two women and two men who dare not give their family names because they fear the man who destroyed their "revolution", who promised democracy and brought dictatorship.

Two refugees detained in Egypt are facing deportation to Eritrea. The expulsion of the Eritreans, who have been incarcerated in Cairo for more than eight years, has been halted ... END_OF_DOCUMENT_TOKEN_TO_BE_REPLACED

International relations are shifting across the Middle East as regional powers adapt to America's retrenchment and China's growing influence. Although the region could become the ... END_OF_DOCUMENT_TOKEN_TO_BE_REPLACED

Germany's foreign policy is explicitly values-based. But what happens, Ralf Bosen asks, when democracy, the rule of law and human rights collide with the logic of trade and ... END_OF_DOCUMENT_TOKEN_TO_BE_REPLACED

"The people aren’t ready for democracy" has been the constitutional basis for Arab tyranny, its favourite slogan and its sacred narrative for more than a century. Yet, asks Khaled ... END_OF_DOCUMENT_TOKEN_TO_BE_REPLACED

A new global database shows a significant gap in reported COVID-related deaths, suggesting the actual worldwide death toll is short by at least 1 million. That's due in part to ... END_OF_DOCUMENT_TOKEN_TO_BE_REPLACED

Two decades after the attacks of 11 September 2001, the West faces the shattered debris of its failure – not only in Afghanistan, but also in Iraq, Syria, Libya and Yemen. What ... END_OF_DOCUMENT_TOKEN_TO_BE_REPLACED
Author:
Birgit Svensson
Date:
Mail:
Send via mail

END_OF_DOCUMENT_TOKEN_TO_BE_REPLACED
Social media
and networks
Subscribe to our
newsletter