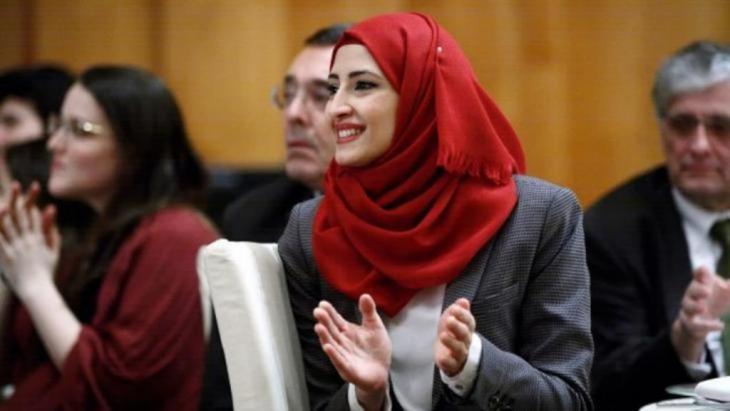 Among Muslims, the image of women as "cossetted hijab-wearing princesses" is frequently invoked. But Muslim women have long wanted to be more. In her essay, Karoline Roscher-Lagzouli explores how they can find a new approach to their Muslim femininity, beyond patriarchal ideals and the hackneyed Western debate on headscarves

Khadija was the first to believe in the still-uncertain, fledging Prophet. She reassured him when he lay hidden under his blanket in her house, and encouraged him to follow his destiny.

Aisha, the Prophet’s young wife, passed on more than 1200 hadiths, taught Islam to the men and did not shy away from correcting their interpretations when she thought it necessary.

Hafsa preserved the Koran as a written text and, so we are told, thereby ended the dispute among the Prophet’s companions after his death about the correct form in which the Koran should be recited.

They were all strong women, who not only stood up autonomously for their rights, but made substantial contributions to the transmission of Islam and Islamic theology. They were operating in a patriarchal society, in the context of which Muhammad’s teachings – especially with regard to the position of women – must have seemed downright revolutionary.

The women of early Islamic history prayed quite self-evidently alongside the men, in one room of the mosque. These houses of prayer had no dividing walls or separate entrances for the different sexes. In the opinion of a few classical Islamic scholars, such as Ibn Hanbal (780 - 855) or even Ibn Taymiya (1263 -1328), who paved the way for the withdrawn and spiritual Salafists, a woman could act as a female imam under certain circumstances and lead men in prayer. Today, the majority of Muslims react to this view with rejection and incomprehension, to put it mildly.

The revolutionary spirit seems to have been lost

Today, the actions and practices of the Prophet and his companions both male and female – the Sunnah – are held up as an example for us to follow by venerable Islamic scholars. But Muhammad’s revolutionary spirit seems to have been lost, buried beneath the dust of the centuries. 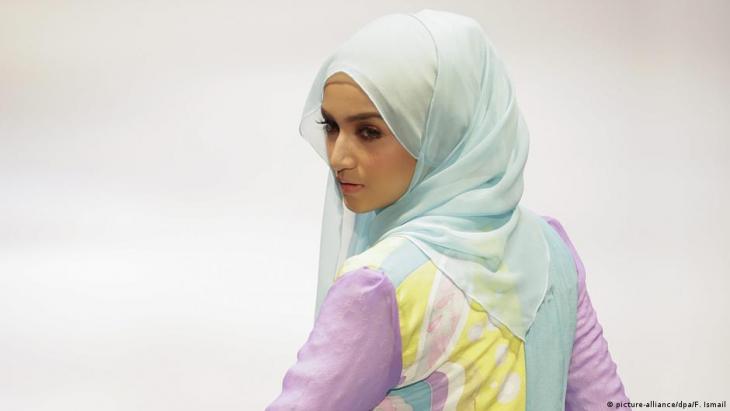 Obsessed with a piece of fabric: "What would become of the critics of Islam and enlightened thinkers, the oh-so-noble liberators of women, without the headscarf?" asks Karoline Roscher-Lagzouli in her essay. "What would they find to write about if the last unregenerate woman were to finally take off her scarf?" For the self-appointed liberators of Muslim women, free Muslim women are only those who have discarded their headscarves. It is inconceivable that some might want to make their own, self-determined decisions

What can be read in the Koran as the start of a process leading to fairness and equal rights is too often not followed to its conclusion, but submerged under an avalanche of men’s fears. These nudges towards equality are lost in the anxiety about somehow being associated with feminism. The term feminism is sometimes used to silence awkward Muslim women who advocate for a self-determined image of Muslim women. Yet even Muhammad may well have been considered a feminist in the social context of his day.

The image of the "ideal Muslim woman"

Today, Muslim men writing supposedly Islamic advice books, and in particular on social media, invoke an image of the "ideal Muslim womani" that is reminiscent of the virtuous American housewife of the 1950s. But in doing so, they don’t see the image of toxic masculinity in which they themselves are becoming entangled.

They lock women away, turning them into cossetted hijab princesses kept in golden cages. And here, the hijab becomes evidence of a Muslim woman’s virtue – the longer the cloth, the more devout the woman, you might think, if you were to believe the motivational sayings and pretty pictures of cute hijab princesses. They turn women into objects, jewels that are merely decorative and have no needs of their own.

The Muslim woman, destined to save the "lost sons in the West"

You can’t force belief, yet a woman must not allow herself any doubt, any wavering. There can be no cracks in the facade of the happy Muslim woman, who always smiles, who should always be devout and humble before her husband, her God. That is the fate laid out for you, sister; are you going to go against what God has ordained? 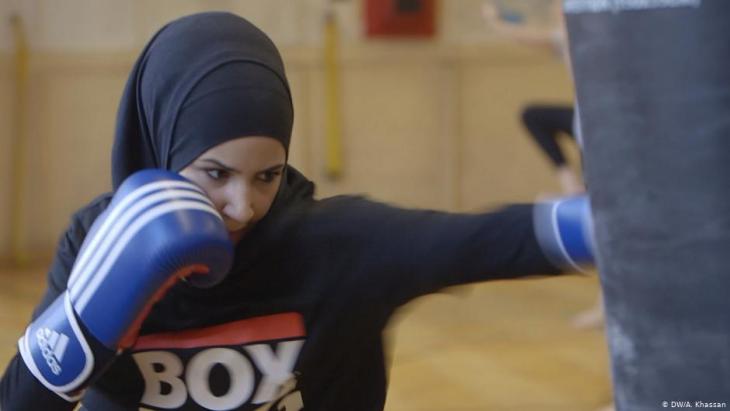 Muslim women also want to skateboard with a hijab or practice sports like the boxer Zeina Nassar, who was the first German to enter the boxing ring wearing a headscarf. They no longer want to be "cossetted hijab princesses" kept in golden cages, writes Karoline Roscher-Lagzouli, "jewels" to be sure, but without needs of their own

For the lost Muslim sons, the headscarf must seem like a last foothold in a postcolonial world, in which the old masculinities are no longer valid. They cling to it, having little more with which to counter Western achievements than the ideal of the Muslim woman. By way of contrast to the cold career-woman of the West, she is supposed to replace a lost homeland, unfulfilled dreams and longings. She is a tender angel, a healer of secret wounds, a mother and a balm for injured masculinity.

She is not permitted to make mistakes. If she took the headscarf off, whole worlds would fall. They want to feel a final remnant of power by defining her identity as a woman, a Muslim woman, even though they have lost their own identities.

The headscarf as an obsession

Your scarf and the hair beneath it don’t belong to you. They belong to the brothers, and also to the debates that are going on above your head. Women’s clothing is only mentioned twice in the Koran. These are two verses which, together with a few traditions handed down from the time of the Prophet and his companions, can be seen as an exhortation to Muslim women to cover their heads, and are thus interpreted by the classical Islamic schools in this way.

In a perhaps infinitely wise piece of foresight, however, the Omniscient left open exactly what this covering or clothing should look like. Neither do the traditions handed down from the time of the Prophet – which we view only through men’s spectacles clouded by the dust of centuries – provide many more hints. And yet the wise men know exactly how much or how little fabric a woman is permitted.

Two brief mentions in the Koran, and yet there seems to be no issue more important than women’s bodies. From furious Internet preachers to self-proclaimed female imams, all the way to Alice-Schwarzer feminism: the veil dominates every idea of what it is to be a woman in Islam

The dream of falling veils

How the situation of Muslims of both sexes is assessed in Germany seems to depend first and foremost on women’s hair. The self-appointed advocates for Muslim women see only free women without headscarves, and unfree women with them. There is no provision for individual, autonomous decisions on the matter of headscarves. Here, too, Muslim women are degraded into oppressed objects who need saving.

What would become of the critics of Islam and enlightened thinkers, the oh-so-noble liberators of women, without the headscarf? What would they find to write about if the last unregenerate woman were to finally take off her scarf? They dream of falling veils like the colonial rulers, who were perhaps the first to light upon the “liberation from the headscarf“ as means of subjugating whole societies.

“We want to do more than carry shopping bags”

Self-reflection and critical questioning can lead Muslim women to new approaches to their religion that are free from male dictates. Muslim women called upon to look at the reality of their lives and their activities, and to measure them against the yardsticks of freedom, against the revelations and practices of Muhammad, which were aimed at equal rights and rational thought. Within his historical context, his practices really can be described as feminist and progressive. 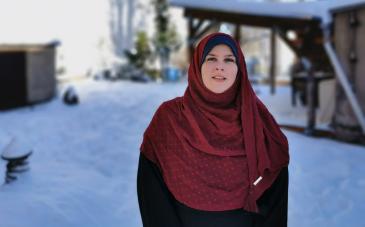 Muslim women want a self-determined life, with or without hijab. "The scarf covers our hair, not our brains. Muslim women are on the move all over the world," writes Carolina Roscher-Lagzouli in her essay. "They are abandoning traditional patriarchal images in the desire to be free." Today's Muslim women will no longer be quietly satisfied with men's explanations. They are reading the Koran and the scriptures anew, "and doing it themselves," as Roscher-Lagzouli points out. "We are loud and angry, we are leading revolutions and we will flip you off if you insult us in the street. We are here – and we’re not going anywhere"

You cannot force freedom. And nor does freedom come from women showing their hair. Patriarchal structures don’t depend on a piece of cloth or a religion, as the self-appointed liberators would see if they could get beyond their focus on visible hair and take a look at the world, or even just look outside their own front doors.

The world is changing. The scarf covers our hair, not our brains. With or without a hijab, Muslim women are on the move all over the world. They are abandoning traditional, patriarchal images in the desire to be free. They are writing, researching and reinventing themselves.

Hijabi is becoming a lifestyle, the headscarf a fashion item, and a feminist statement as well as a spiritual one. We want to ride skateboards and dance with brightly-coloured scarves. We will no longer be silently content with men’s explanations; we are reading the Koran and the scriptures anew, for ourselves this time.

We are loud and angry, we are leading revolutions and we'll flip you off if you insult us in the street. We are here, and we’re not going away.

Karoline Roscher-Lagzouli studied Islamic Studies and works as an author.

Home
Print
Newsletter
More on this topic
An enduring stereotype: The West's gleeful obsession with the 'oppressed Arab woman'Women′s rights in the Arab world: The key to changeNon-fiction: Kubra Gumusay's "Sprache und Sein": Beyond the linguistic pigeonholeInterview with Dina El Omari on feminism and Islam: "Muslim women need space for critical self-reflection"Feminism, colonialism and Islamophobia: Treacherous sympathy with Muslim women
Related Topics
Colonialism, Feminism in Islam, Gender, Integration in Germany, Islam in Europe, Islam in Germany, Islamic lifestyle, Muslim women, Muslims in the West, Sexism and violence against women, The Headscarf Controversy, Women in the Islamic world
All Topics

Research project "The Global Qur'an", brainchild of Professor of Islamic Studies Johanna Pink and sponsored by the European Research Council, analyses the history and ... END_OF_DOCUMENT_TOKEN_TO_BE_REPLACED

As the Western world emerges from a holiday season made less festive by COVID-19, millions of children in Afghanistan are starting 2022 facing the prospect of famine, illness, and ... END_OF_DOCUMENT_TOKEN_TO_BE_REPLACED

A wedding extravaganza of bright colours, flowers, feasting and dancing, yet the bride, Nefie Eminkova, who comes from Bulgaria's Pomak – Muslim – minority, can see none of it. ... END_OF_DOCUMENT_TOKEN_TO_BE_REPLACED

Every year in December, the team at Qantara.de takes a look back at the articles that proved most popular with our readers. This year is no different. Here is a run-down of the ... END_OF_DOCUMENT_TOKEN_TO_BE_REPLACED

Jesus – Issa in Arabic – doesn’t merely enjoy the highest place among the prophets in the Koran. He is also revered in Islam’s mystical tradition for his message of love and mercy ... END_OF_DOCUMENT_TOKEN_TO_BE_REPLACED

The military in Sudan has never waged war against a neighbour, but it has already staged 17 coups. Tens of thousands of people are risking their lives to oust the military by ... END_OF_DOCUMENT_TOKEN_TO_BE_REPLACED
Author:
Karoline Roscher-Lagzouli
Date:
Mail:
Send via mail

END_OF_DOCUMENT_TOKEN_TO_BE_REPLACED
Social media
and networks
Subscribe to our
newsletter