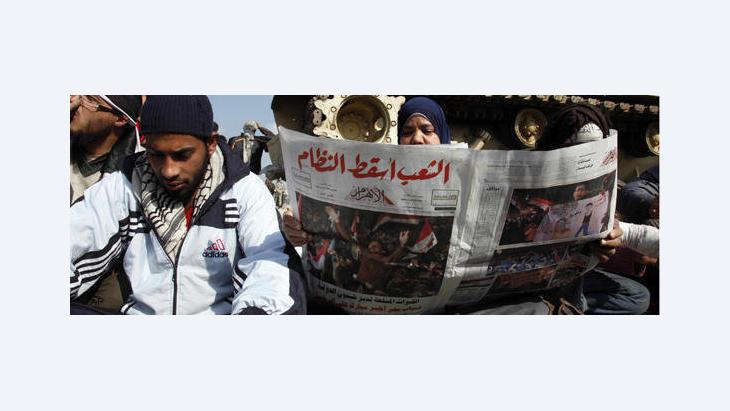 The "Status Report about the Dialogue of Cultures in the World", which is published by the "Arab Thought Foundation", is on the one hand an analysis of the image of the West in the mindset of Muslim Arabs and on the other, the image of Arabs in the western mindset. The report analyses editions of a total of 19 newspapers published in Arabic, French, English and German, newspapers that reported on political, cultural and social activities in the Arab world in the year 2009. 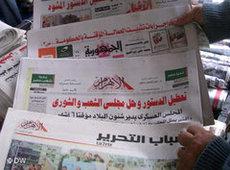 Indicators of Egyptian public perception of the West: editions of Al-Ahram and other regional newspapers at a kiosk in Cairo

​​The aim of this investigation is to discover to what extent Arab and western media promote dialogue between the cultures, or whether they actually hinder this or even prevent it. The report is based on statistical surveys, although it only considers press material that covers issues relating to the Western world and predominantly Muslim nations in a comparative fashion.

Two Arab newspapers are especially revealing when appraising the image of the West in Arab media: The Egyptian daily "Al-Ahram", as well as the Lebanese edition of the newspaper "Al-Hayat".

The portrayal of the West as subject of journalistic debate in the Egyptian newspaper "Al-Ahram" included coverage of particular theoretical facts as well as political events. Data listed by the compilers of the report show that 37.5 percent of theoretical discussion focused on the subject of conflict between the West and Islam, which proves just how dominant this issue was.

It was followed by (each with a share of 20 percent) contextual debate on the scientific advances taking place in the West, which provided the region with the prerequisite for military expansion, as well the charge of "western arrogance". The theory that modernism apparently represents a concept of western dominance was featured in 17 percent of analyzed material, followed by the perception of the West as democratic model, with a share of just four percent. 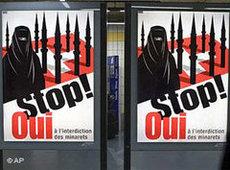 In the media spotlight: With a share of 29 percent, issues such as the minaret controversy in Switzerland dominated reporting on the West in the pages of "Al-Ahram"

​​The image of the West in the journalistic discourse of "Al-Ahram" was primarily dominated by the Palestinian-Israeli conflict and the minaret controversy in Switzerland – each with a share of 29 percent – followed by western actions against Al Qaeda and the Iranian nuclear programme (each with a 14-percent share of coverage). Eleven percent of analyzed material dealt with the death of Egyptian national Marwa El-Sherbini in Germany.

Analysis of reporting on the West in "Al-Ahram" puts politics in first place at 29 percent, followed by religious and cultural issues (each with 22 percent) and military issues (15 percent).

The journalistic discourse in "Al-Ahram" displays both positive and negative characteristics in the portrayal of the West. The negative aspects of medial perception emerge in particular in the idea of a "hegemonic demeanour", while the positive aspects are based on terminology such as "scientific superiority", "reason" and "technical progress".

The international edition of "Al-Hayat" presents a similar image of the West to its Muslim Arab readership, although "Al-Hayat" sets greater store by political ideas than by daily political events.

The authors of the report reveal that "Al-Hayat" focused specifically on the image of the West 44 times in a theoretical context and 38 times in the context of a specific event. This shows that the editorial team attaches great importance to presenting in detail the spiritual, philosophical and also comparative aspects in its engagement with the image of the West. 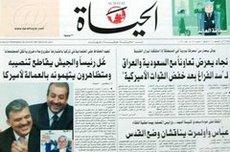 "Positive points in the coverage of western issues in 'Al-Hayat' are manifested in aspects of reason and freedom, as well as a readiness in principle to enter into dialogue," writes Maurice Abu Nader

​​This was evident from a series of ideas, among them that of "exploitation of the western other" through clarification of the mindset of Muslims and their motivation to adopt new values that influence a process of social rejuvenation. The same also goes for the idea of a dialogue between western and Islamic mindsets as well as the issue of the self-exclusion of Muslim minorities in the West.

Positive points in the coverage of western issues in "Al-Hayat" are manifested in aspects of reason and freedom, as well as a readiness in principle to enter into dialogue. Apart from focusing on the theoretical aspects in the image of the West in "Al-Hayat", editorial content also concentrated, if only to a lesser extent, on several important political, economic and military events: the Arab-Israeli conflict, the international financial crisis, Barack Obama's speech at Cairo University as well as the war on terror.

In summary it can be established that "Al-Hayat's" picture of the West does not differ greatly from that of the Egyptian daily "Al-Ahram". And it is an image that is graded in accordance with its respective significance, beginning with politics, followed by culture right through to the military demeanour of the West.

This medial discourse basically documents and verifies an image already familiar to us. The report by the "Arab Thought Foundation" on intercultural dialogue does however underline how important it is, when dealing with content that is difficult to document and ascertain statistically, to choose the path of methodical analysis.

Home
Print
Newsletter
More on this topic
Arab and Western Media 10 Years after 9/11: When Is a Martyr a Martyr?
Related Topics
Dialogue of Cultures | Intercultural Dialogue, Islam and democracy, Islam and the West, Media dialogue, Media in the Arab World, New media in the Muslim world
All Topics

The Palestinian militant organisation Hamas, with Hezbollah's help, is building up a military presence in Lebanon, the ultimate consequences of which could be devastating, writes ... END_OF_DOCUMENT_TOKEN_TO_BE_REPLACED

In this essay, renowned Lebanese journalist and writer Hazem Saghieh asks whether the Arab Levant, which stretches from Iraq in the East to Egypt in the West, will remain an ... END_OF_DOCUMENT_TOKEN_TO_BE_REPLACED

Khaled Bahlawan hammers nails into a traditional wooden boat he built by hand, toiling under the scorching sun on Syria's Mediterranean coast to preserve a disappearing ancient ... END_OF_DOCUMENT_TOKEN_TO_BE_REPLACED

"Flugt" is the world's first museum dedicated to the stories of those forced to flee. The new museum, which focuses on the fates of refugees then and now, is housed in a former ... END_OF_DOCUMENT_TOKEN_TO_BE_REPLACED

"Finding Home", the second album by Syrian-born, UK-based musician Maya Youssef, works through feelings of loss and destruction until its music reaches a place beyond war and ... END_OF_DOCUMENT_TOKEN_TO_BE_REPLACED

Foresight is needed to turn the tide of German policy. Being independent of Russia must not lead to dependence on authoritarian regimes in the Middle East. By Kristin Helberg END_OF_DOCUMENT_TOKEN_TO_BE_REPLACED
Author:
Maurice Abu Nader
Date:
Mail:
Send via mail

END_OF_DOCUMENT_TOKEN_TO_BE_REPLACED
Social media
and networks
Subscribe to our
newsletter