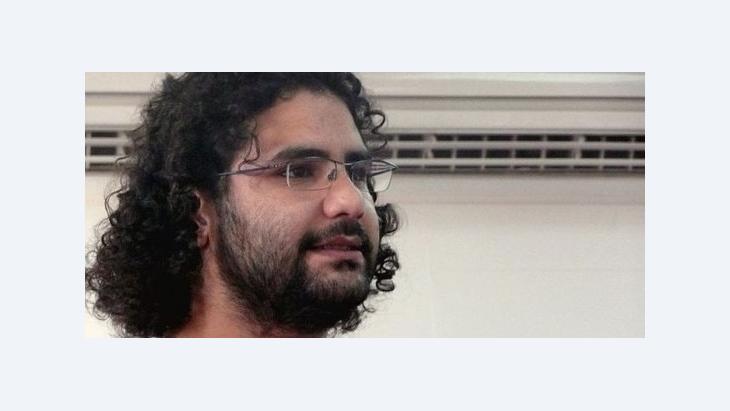 ﻿"Instead of arresting the murderer of the blogger Khaled Said, the military imprisoned me, just before the birth of my son. The only good thing is that the protests are continuing," writes Alaa Abdel Fattah, one of the Egyptian revolution's best-known bloggers and activists

Alaa Abdel Fattah, a real symbol of the youth protest movement in Egypt, has been in prison for more than two weeks. He refuses to appear before a military court because he wants to protest against the fact that an increasing number of Egyptian civilians are being sentenced by military courts under the new government.

"For the past three years, I have spent Eid-ul-Adha far away from my family because I was living abroad. The first day of the festival took place just like any other day: we went to work in the morning and came home late in the evening. If it hadn't been for a telephone call from my family wishing us a blessed festival, we wouldn't even have known it was a religious holiday.

This year was to be of special significance for me. It would have been the first time since our return that we would spend the festival with our family. But the military felt that we did not have the right to celebrate, and so I spent the day in a prison cell. My family spent the whole day in an endlessly long queue just so that some of them could spend a few minutes visiting me – under the watchful eye of a large group of policemen. 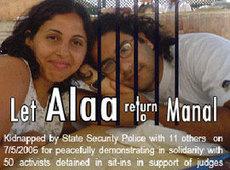 Alaa Abdel Fattah and his wife Manal write a blog, which has received a number of international awards; he was imprisoned once before in 2006 and then spent several years in South Africa before returning to Egypt in January

​​Because of the conversation with my mother, who is on hunger strike because of my imprisonment, and because I was overcome with a feeling of despair at not being allowed to exchange letters with my wife Manal, I had no cause for celebration on this religious festival.

Because the prison staff and soldiers there were given time off to celebrate Eid-ul-Adha, there were only half as many people working in the prison. That meant four days shut inside the cell: no visits, no breaks, no newspapers, and not even food brought in by visitors. … "What? Do you want the criminals to celebrate, too? "

If it hadn't been for your tweets, which I received in the form of telegrams, I wouldn't have known that people were celebrating a holiday in the outside world. I want to thank everyone who made the effort to send me something and to thank those who came up with the idea. 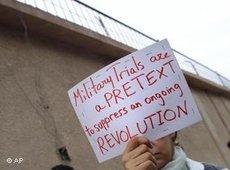 Protests against military court cases and the imprisonment of Abdel Fattah: his supporters suspect that he was arrested to bring activists involved in the anti-Mubarak protests into disrepute; even the United Nations Human Rights Council has called for his release

​​My birthday will fall on a Friday – a holiday – so there will be no visitors, and the cell door will remain shut. You should celebrate on the square for me.

The only joyous moments I have are when I hear about your solidarity, whether it is the demonstrations held in front of the prison (which I unfortunately do not get to experience, as my cell is on the other side of the prison, but other prisoners have told me about them) or the demonstrations against the military court cases that are taking place everywhere from Luxor to Alexandria. And then there are the protests in Oakland and San Francisco. The demonstrators in these cities hold a very special place in my heart, as I made a short trip there and took part in their sit-in and their meetings.

Eid-ul-Adha is over now and my birthday will soon have past. I am used to spending both of these occasions far away from my family. But what about the birth of my first son, Khaled. How can I miss that? How will I be able to bear not being with my wife Manal at this time? How will I be able to endure waiting for news of whether she is alright or not? How will I be able to stand not seeing the face of my son and the face of his mother looking down upon him? How will I be able to look my son in the eye when I am released. After all, I had promised him that he would be born a free person. We have named him Khaled, because we are in Khaled Said's debt. Yet, instead of putting Khaled's murderers in prison, it is I who sit in jail."

Since President Abdul Fattah al-Sisi seized power in Egypt in 2013, he has ruled the country with an iron fist. Civil society, opposition and free press struggle to survive. Tens ... END_OF_DOCUMENT_TOKEN_TO_BE_REPLACED

The lack of grain supplies from Ukraine is forcing Egypt to act. Now even the Toshka project is being revived to grow grain in the desert. Birgit Svensson travelled to see it END_OF_DOCUMENT_TOKEN_TO_BE_REPLACED

In this unusually beautiful book of images and text, published in German and Arabic, artist Marianne Manda presents her own unique take on the megacity of Cairo. In over fifty ... END_OF_DOCUMENT_TOKEN_TO_BE_REPLACED

A stage, lights, a mesmerised audience: it looks like an Egyptian folkloric concert, but Umm Sameh is singing to heal the sick by driving out the demons that possess them END_OF_DOCUMENT_TOKEN_TO_BE_REPLACED
Author:
Alaa Abdel Fattah
Date:
Mail:
Send via mail

END_OF_DOCUMENT_TOKEN_TO_BE_REPLACED
Social media
and networks
Subscribe to our
newsletter