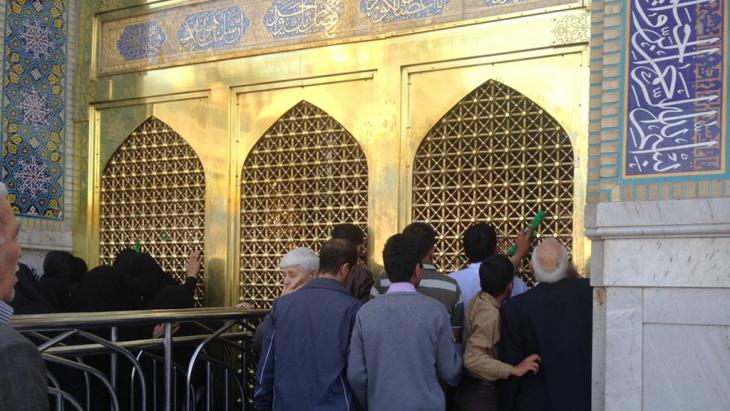 The influence of Iran′s religious foundations
Faith and profit enshrined

Millions of pilgrims visit the shrine of Imam Reza in Mashhad to be near to the holy man. The tomb is an important economic factor for the city, but at the same time it is the centre of an extensive business em-pire wielding huge influence in Iranian politics. On the political economy of the holy man, by Ulrich von Schwerin

The air in the courtyards is still cool before the heat of the day: beneath the golden dome, the number of pilgrims attending the grave of Imam Reza is still manageable. Towards midday, it will no longer be possible to pass through here for the mass of people pushing forwards. The neverending stream of pilgrims does not let up and is guided around the tomb of the Imam by specific gestures given by black-uniformed guards. But just before sunrise, it is still quiet inside the Mashhad mausoleum, the most important pilgrimage site in Iran.

The tomb is like a beating heart that attracts pilgrims from the entire Shia world and keeps an ever-flowing stream of people in motion. It beats slower in the mornings and faster at midday, but it is never completely still. Pilgrims even visit the grave of the Eighth Shia Imam at night. The site draws 20 million pilgrims every year – from Iran, Iraq, Lebanon, the Gulf States and Afghanistan, which is just 200 kilometres away. That's an average 56,000 worshippers a day and considerably more on public holidays.

Closer to the ″light″ of God

In the rooms around the central burial chamber, the sparkling roof covered in a mosaic made of thousands of tiny mirrors, the men sit leaning against the marble-clad wall, an open book on the floor, prayer beads between their fingers. Segregated along gender lines, the men enter the chamber from one side, the women from the other, kissing the door frame, before pressing the forehead and lips against the bare metal of the grille that surrounds the grave – many of them with tears in their eyes.

Grieving for the martyr plays a key role in Shia Islam and when a preacher tells of the death of Imam Reza in the year 818 at the hands of the Caliph Al-Ma'mum, entire roomfuls of people demonstratively burst into sobs, as though it happened just yesterday. But for many pilgrims the emotion is real and the pilgrimage to Mashhad the fulfilment of a long-held dream. Visiting the shrine of the Imam enables them to share in the experience of the holy man – or as Mohsen describes it, it brings the faithful closer to the "light" of God's truth. 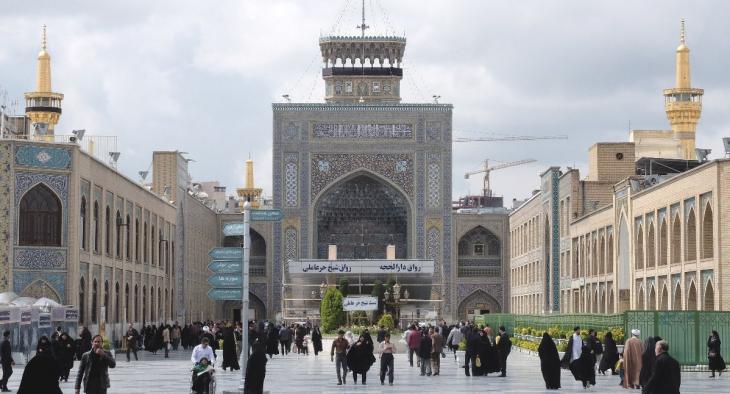 Due reverence to the Imam: while the internal rooms fill up with pilgrims, outside on the "Islamic Republic Courtyard", shrine staff are rolling out carpets for midday prayers. On the four sides of the courtyard, which is linked up with the burial chamber to the north, there are towering portals clad in blue, yellow and turquoise tiles, which form elaborate ornaments and calligraphic lines of writing, while the portal to the burial chamber is entirely covered in gold

The young man in his mid-20s, who resembles former President Mahmud Ahmadinejad with his blue jacket, black collarless shirt and unshaven chin, is studying theology in Isfahan and hopes to enter the clergy. "Regular people cannot directly see the light of God and that is why God sent the 12 Imams to bring light to the people," says Mohsen and makes a gesture, as though trying to catch the light in his hands and offer it to someone.

Mohsen is a seeker – in search of the truth. "Every day I learn something new about God here," he says. He comes to Mashhad five or six times a year, to spend a few days at the tomb of the Imam, to study, to meditate and to be close to the "light" of God. He is still at the start of his journey; a journey he will never complete, says the theology student. But the gleam in his eyes suggests that he has at least found some of that divine light already.

Faith is the foundation's most important capital

While the internal rooms fill up with pilgrims, outside on the "Islamic Republic Courtyard", shrine staff are rolling out carpets for midday prayers. On the four sides of the courtyard, which is linked up with the burial chamber to the north, there are towering portals clad in blue, yellow and turquoise tiles, which form elaborate ornaments and calligraphic lines of writing, while the portal to the burial chamber is entirely covered in gold – an indication of the reverence of the Imam, as well as the wealth of the shrine.

The pilgrimage site is an important economic factor for Mashhad, but at the same time the shrine itself wields economic power with an influence in Iran that cannot be underestimated. Having attained enormous wealth through donations and gifts over the centuries, the Astan-e Qods-e Razavi Foundation that manages the shrine has since the 1979 Revolution grown into an extensive business empire that uses its capital in a blatantly profit-orientated manner, making large-scale investments in Iraq, Syria and Lebanon.

Fariduddin Attar’s "The Conference of the Birds", one of the seminal works of Islamic mysticism, has recently been published in sumptuously illustrated German translation. It ... END_OF_DOCUMENT_TOKEN_TO_BE_REPLACED

In "Iran. Die Freiheit ist weiblich", journalist Golineh Atai describes the dogged resistance of courageous Iranian women against the Islamic Republic and the mullahs who have ... END_OF_DOCUMENT_TOKEN_TO_BE_REPLACED

The violent death of 22-year-old Mahsa Amini has achieved something the entire opposition has failed to do during the 43-year rule of the ayatollahs in Iran: almost the entire ... END_OF_DOCUMENT_TOKEN_TO_BE_REPLACED

Like Christianity, Europe's history is one of migration. Both have strong roots in the Orient and in cultures thousands of years old. Cultural historian Bernhard Braun invites us ... END_OF_DOCUMENT_TOKEN_TO_BE_REPLACED

A lot is happening in Syria’s Sweida Governorate – foreign intervention there is unprecedented both in terms of scale and number of actors – yet Damascus remains the dominant ... END_OF_DOCUMENT_TOKEN_TO_BE_REPLACED

Russia is leaving no stone unturned in its attempts to make the Islamic Republic an ally in the war against Ukraine. Fortunately for Vladimir Putin, the mullahs in Tehran are ... END_OF_DOCUMENT_TOKEN_TO_BE_REPLACED
Author:
Ulrich von Schwerin
Date:
Mail:
Send via mail

END_OF_DOCUMENT_TOKEN_TO_BE_REPLACED
Social media
and networks
Subscribe to our
newsletter