Like few other institutions, the foundation shows just how closely interlinked faith, profit and power are in Iran: the piety of the people legitimises the religious regime and brings it financial gain that it can use to stabilise its power. Conversely, the regime invests in the religious infrastructure and promote pilgrimages to Mashhad and other holy sites, to justify to its claim to be the representative of the Imams and the defender of Islam and to spread its reading of the faith among the populace.

The shrine has undergone major developments since the 1979 Revolution. Numerous rooms and courtyards have been built in addition to the old halls and courtyards built by the Safavids and Qajars in the 17th and 19th centuries, to accommodate the rising number pilgrims; huge sanitary facilities, shopping malls and underground car parks have also been built. The developments have indeed served to enhance the overall efficiency of the complex, reports the architect and anthropologist Samar Saremi, who is carrying out research into the construction history of the shrine.

There was little difference between the handling of the shrine and other urban sites with transport and access issues, says the architect, citing the escalators integrated into the mediaeval architecture. Although the manner in which a pilgrim approaches a shrine – whether on foot or by car – changes the meaning of the act and the perception of the place, the predominant concern in the design was pragmatic access with the aim of organising the pilgrimage as efficiently as possible.

Free to act at will: the Astan-e Qods-e Razavi Foundation which has managed the shrine has since the 1979 Revolution has grown into an extensive business empire that uses its capital in a blatantly profit-orientated manner, making large-scale investments in Iraq, Syria and Lebanon

It is midday and the internal courtyards have filled with worshippers for midday prayers, the "brothers" on one side and chador-clad "sisters" on the other. While the call to prayer is issued from the rooftops, more pilgrims approach hurriedly via the shade-free outer courtyards, until all spaces on the carpet are taken up and the black-uniformed guards close off the internal area and wave the new arrivals through into the subterranean halls that were built beneath the old courtyards.

President Rouhani has neither insight nor control

At the exit, Keyvan waits for a tour through Mashhad. "Do you know another city where there is such a high concentration of hotels?" asks the civil engineer, as he weaves his car through the traffic, pointing at the hotel towers around the shrine. They all live from the pilgrims, many of them belong to Astan-e Qods. But that's not all: the foundation also owns shopping malls, factories, banks; it owns half of the real estate in this city of millions and most of the land in the surrounding province of Khorasan.

"The foundation takes what it wants by force," says Keyvan, not his real name. No one stands a chance if it raises a claim to a plot of land or building. The civil engineer with the rimless glasses and shaved head has never worked for it, because its contracts can only be won through contacts. The foundation is hated in the city, it does no charity work, says Keyvan. The foundation enjoys tax-free status and autonomy from the government.

Like the other religious foundations, Astan-e Qods is controlled by Supreme Leader Ayatollah Ali Khamenei, says Tubingen-based ethnologist Katharina Muller, who is conducting research into the structures of the foundation. But even Khamenei has only a limited say in the running of the foundation, while the government of President Hassan Rouhani has neither insight nor control. Muller emphasises that Astan-e Qods is not an executive organ of the government, but a self-contained, very self-confident political actor that pursues its own course in politics and business.

The long-time foundation chairman Ayatollah Abbas Vaez-Tabbasi, also described as the "Emperor of Khorasan" owing to his extensive powers, died last March. But it still remains to be seen whether Khamenei can tighten his control over the foundation. Although the new chairman Ebrahim Rais is unlikely to attain the position of his predecessor, a man who led Astan-e Qods since the 1979 Revolution, it is Muller’s view that the foundation will certainly make sure it safeguards its independence. 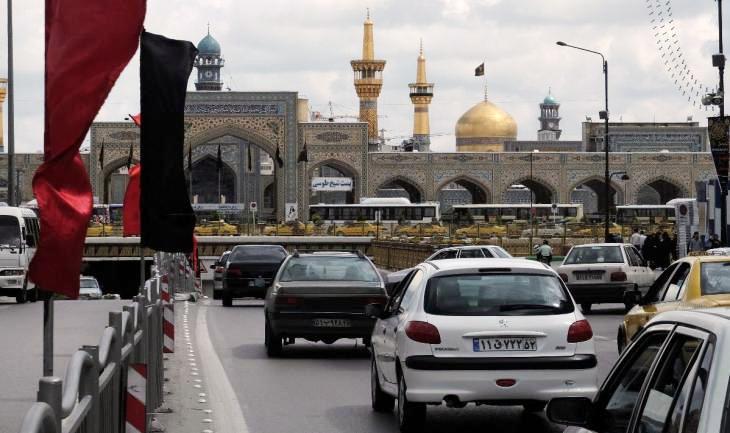 The 'catacombs' of Imam Reza: in the fog of emissions and traffic noise, it's hard to imagine that the tomb of the Imam is just a few metres away. Most of the city's traffic travels along the multi-lane expressway, accessed from four sides via motorway-style feeder roads. The expressway also provides access to the subterranean car parks, from which the pilgrims can directly enter the shrine

The foundation sees itself as a guardian of the tradition and the values of the Islamic Revolution. It rejects a liberalisation of politics and culture and also takes a critical view of President Rouhani's efforts to open up the country's economy. This is also because such an opening would threaten the very existence of many of Astan-e Qods' companies and factories, as its economic model only functions as long as the nation is isolated and business is not exposed to international competition.

Keyvan steers his car back onto the subterranean ring road that encircles the shrine beneath the outer courtyards. In the fog of emissions and traffic noise, it's hard to imagine that the tomb of the Imam is just a few metres away. Most of the city's traffic travels along the multi-lane expressway, accessed from four sides via motorway-style feeder roads. The expressway also provides access to the subterranean car parks, from which the pilgrims can directly enter the shrine.

But Keyvan prefers to stay outside. Like many young Iranians, the 33-year-old is estranged from Islam. The shrine of Mashhad may show how strong the faith and how important Islam still is for many Iranians, but for years now, studies have also shown that religiosity in Iran is declining and that members of the young generation in particular are turning away from Islam in droves because of the political misuse of religion by the regime.

Keyvan is annoyed by the perpetual religious propaganda and weary of the continual presence of the mullahs in the media. He is unsettled by the fervour of the pilgrims, when they strike their chests, sobbing in grief at the death of the Imam and left cold by the beauty of the architecture, the rich gold of the dome, the deep blue of the portal. He only comes to the shrine once a year, when he accompanies his mother to pray. If faith is the capital of the foundation, Keyvan has no contribution to make.

On Friday, Iranians head to the polls to elect a new president. What's at stake in this presidential election? Sanam Shantyaei explains. END_OF_DOCUMENT_TOKEN_TO_BE_REPLACED

For centuries, the great classical Persian author Hafez has inspired German writers. Translations, adaptions and homages have been created in his wake, and the process continues ... END_OF_DOCUMENT_TOKEN_TO_BE_REPLACED

In the run up to Iran’s presidential election, Supreme Leader Ayatollah Ali Khamenei has sought to entrench his power. Alex Vatanka asks whether a sharp slump in voter turnout ... END_OF_DOCUMENT_TOKEN_TO_BE_REPLACED

Turkey's parliamentary and presidential elections are scheduled for June 2023. But they are already casting a shadow. While the opposition is calling for early elections, ... END_OF_DOCUMENT_TOKEN_TO_BE_REPLACED

Despite promises to the contrary, the social and economic situation in Iran deteriorated under President Rouhani, prompting two nationwide revolts in recent years. Yet the social ... END_OF_DOCUMENT_TOKEN_TO_BE_REPLACED

END_OF_DOCUMENT_TOKEN_TO_BE_REPLACED
Social media
and networks
Subscribe to our
newsletter