Some employers have also reported the women to the police for alleged theft. This is a common practice used to avoid paying outstanding wages and return tickets, and a way to disavow any responsibility for the employee. And now this tactic seems to be serving another purpose as well. "One of the madams wrote: You stole a hairdryer, if you give it back, you'll get your passport. But that's just a trick to make the worker come back, so that she can be locked up," says Foi'elle. 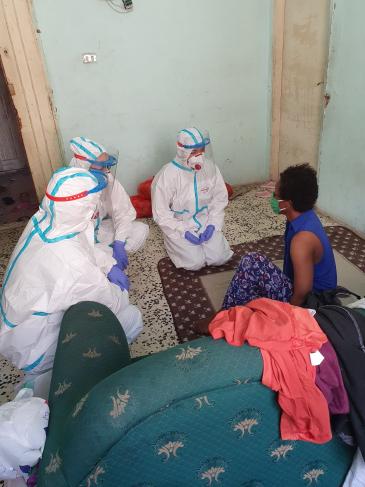 30-year-old Nigerian Bukola was abused by the family she worked for as a housemaid and thrown out on the street without money. She lived on the streets for four days before finding shelter with an organisation where she is treated by doctors free of charge. Hospitals and private practices had denied her medical treatment. "She was not admitted to the hospital because she has no passport, and also obviously because she is black," reports Dara Foi'elle

Another problem makes it even more difficult for foreign employees like the Nigerian women to leave Lebanon. As soon as they leave their jobs or are kicked out, the women lose their legal residence status in Lebanon, because under the kafala system they are bound to their sponsors, whether they pay them or not. "Kafala" means sponsorship in Arabic.

The kafala system legally binds the employee completely to the Lebanese "kafil" (sponsor), i.e. the employer. The workers, most of them women, are thus utterly at the mercy of their sponsor. They are not covered by Lebanese labour law and have no personal rights or freedoms. Nor are they allowed to leave the country without the written permission of the kafil, even after their employment contract has ended. As soon as the worker leaves the kafil's household, even against her will, she is in the country illegally and can be arrested at any time.

To leave the country, the women first need to obtain a valid exit permit. But this permit is only issued by Lebanese General Security, an office of the Ministry of Foreign Affairs. The Foreign Ministry building is currently occupied by demonstrators. Moreover, the government of Prime Minister Hassan Diab resigned on Monday (10 August). Without a functioning government, no one knows when exit permits will be issued again.

"The suicide rate is rising"

Many of the migrant workers stranded in Lebanon share Bukola's fate. Even before the explosion in the port of Beirut, hundreds of people had been dropped off outside their respective embassies with their suitcases. And those who have not been put out on the streets are often in forced labour. "Domestic workers in Lebanon have been left at the mercy of the slave owners. The suicide rate is rising," says "Patricia" from This Is Lebanon.

Before the coronavirus crisis, two female migrant workers were dying in Lebanon every week, according to official statements by the secret service detail of Lebanese General Security. The most frequent cause of death is apparently suicide. But non-governmental organisations and anti-kafala activists suspect that some of the deaths officially declared as suicide were actually cases of murder. And they presume that the number of deaths is much higher than stated. When a domestic worker dies, there is no proper police investigation, says This Is Lebanon. The Lebanese employers are taken at their word.

There have also been several incidents in recent months where Lebanese employers have tried to sell their domestic workers through online ads or social media posts. An April post read (in Arabic): "1,000 U.S. dollars. African housekeeper for sale (Nigerian woman) with new residence permit and valid papers. 30 years old. Active and very clean." 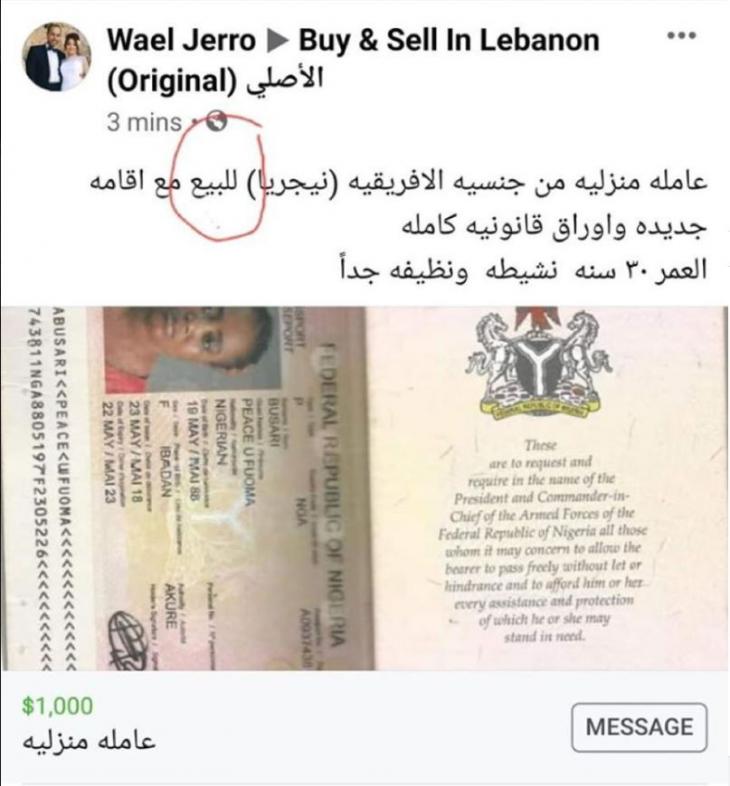 During the crisis, some employers have tried to "sell" their domestic workers: "1000 U.S. dollars. African housekeeper for sale (Nigerian woman) with new residence permit and valid papers. 30 years old. Active and very clean," reads a social media post from April

Following the explosion in the port of Beirut on 4 August, which killed over 200 people, injured over 6,000 and left 300,000 homeless, the situation of foreign workers is expected to deteriorate further. Aid organisations and activists are calling on national governments to bring their citizens home immediately and without any red tape.

However, most embassies still refuse to come to the aid of female migrant workers. As This Is Lebanon reports, the Kenyan Embassy has posted police outside its doors so that their own citizens are prevented from seeking refuge there. This happened shortly after an investigative report by CNN revealed human rights violations by the embassy.

Other official agencies, such as the Ethiopian Embassy, demand outrageous prices for plane tickets. Various aid organisations, such as Egna Legna Besidet, the Anti-Racism Movement and This Is Lebanon, along with private activists, are trying to raise funds to help the women return to their home countries as quickly as possible.

Some migrant women are coming up with creative solutions. A group of female workers from Sierra Leone formed the band Thewanthdean (A Sisterhood) and recorded the song "Bye and Bye". In the song, the women tell their future grandchildren about their hard lives and the abuse they have suffered in Lebanon. This is their way of drawing attention to their plight and earning the money they need to survive and to buy plane tickets.

Activists call for the abolition of the kafala system

Over the past decade, both Lebanese and international organisations and activists have been calling for the abolition of the discriminatory kafala system. In 2019, Minister of Labour Camille Abousleiman publicly acknowledged that the kafala system was a form of modern slavery. And yet he did not deem that to be a sufficient reason to abolish kafala.

Increased media coverage of the fate of women abandoned outside their embassies now gives reason to hope that international pressure will force the Lebanese government to come to the aid of these migrant workers.

Dipendra Upreti from Nepal, co-founder of This Is Lebanon and himself a former worker there, sees the financial crisis currently affecting the country as another route for abolishing the kafala system: "Lebanon expects to receive international humanitarian aid in the crisis. But it should only be granted on condition that Lebanon abolishes the kafala system, guarantees the rights of migrant workers and treats all people as equals. Otherwise there is no hope." 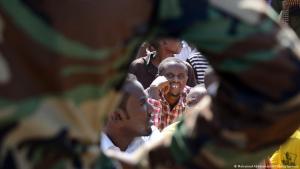 With elections on the horizon and an altered African Union mission, Somalia was meant to enter a new phase of stabilisation in 2021. But both have been postponed, and the present ... END_OF_DOCUMENT_TOKEN_TO_BE_REPLACED

The end of July saw the launch of the African Union’s "Sauti" digital publication, the first young feminist platform in Africa, which this year showcases stories by female youth ... END_OF_DOCUMENT_TOKEN_TO_BE_REPLACED

Jeddah is very different from other cities on the Arabian Peninsula, says Ulrike Freitag, historian of the Modern Middle East. In her book "A History of Jeddah", she explores the ... END_OF_DOCUMENT_TOKEN_TO_BE_REPLACED

Can art help individuals process the experience of fleeing across the Mediterranean? Sponsored by Malteser International, the art project "Human Cargo" in Ahaus, Germany, is ... END_OF_DOCUMENT_TOKEN_TO_BE_REPLACED

Ethiopia and Eritrea didn't pen their peace agreement in Addis Ababa or Asmara, but in Saudi Arabia with the Emirates alongside. Are economic and military interests increasingly ... END_OF_DOCUMENT_TOKEN_TO_BE_REPLACED
Author:
Sandra Wolf
Date:
Mail:
Send via mail

END_OF_DOCUMENT_TOKEN_TO_BE_REPLACED
Social media
and networks
Subscribe to our
newsletter