Integration is a right, not a duty

It is important, therefore, to think about how "successful" refugees are portrayed and what sort of ideas these accounts convey. Because the way the stories tend to be presented today probably ends up achieving the opposite of what is intended.

The impression should not be given that living in a different country and integrating into a new society is some sort of test that those who end up integrating have passed, while those who don't should be the targets of scorn and ridicule.

Integration is a right rather than a duty that must be fulfilled. Therefore, it is necessary in questions of integration to dismiss any kind of coercion, threats or intimidation. Instead, we must promote dialogue; we must talk about rights and convince people not only on a rational but also on an emotional level. 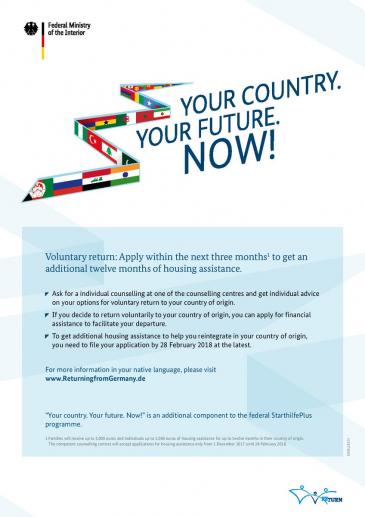 What message is being sent? "Whether you successfully integrate or not, Germany is not your future!" In this sense, it makes no difference whether refugees are "integrated" or otherwise

And another aspect of the debate must also be considered: the prospect of either representing a shining example of integration or being branded as a failure is not the worst scenario that refugees face. Instead, it seems that they ultimately cannot escape humiliation regardless of their personal efforts.

At least this was the impression that not only refugees got from the billboard campaign launched by the German Ministry of the Interior encouraging them to voluntarily return to their native countries.

In purely formal terms, the campaign was aimed at refugees – all of them, whether "integrated" or not. Its slogan "Your Country. Your Future. Now!" suggests that Germany could never become "their country". Implicitly, yet unmistakeably, "Your Country" is the country they came from.

The campaign ignores the fact that whatever place these people have left behind is not really their home or their country anymore. Otherwise they would not have fled from it. In fact, the campaign was not really aimed at refugees at all.

Its goal was to convince the German populace that the government was doing everything in its power to send as many refugees as possible back to "their countries of origin" or "home", to get rid of them and to reduce their number as quickly as possible. Because sooner or later, the idea is, they are to build their futures there, not here in Germany.

Shift in the public discourse

The message of such a campaign also reaches refugees: "Whether you successfully integrate or not, Germany is not your future!" In this sense, it makes no difference whether they are "integrated" or "not integrated". At the same time, a shift is taking place in the public discourse. Once, it was said that one should help those in need. But now the best thing to do is supposedly to help them return to their home countries as quickly as possible, because unfortunately they ended up here!

Little by little, this notion undermines even the promise of gaining acceptance through integration. Humiliation is inevitable at the end of the process – integrated or not.

This is a blatant contradiction to the German "welcoming culture", the best thing this country has contributed to the world in many years. With its advent, there was a hope that Germany could be an inspiring role model for the rest of the world.

Recent developments suggest, however, that this hope could be dashed. It is very possible that this welcoming culture will be further side-lined and perceived as foreign even in its place of origin.

The anti-Israeli Quds Day did not take place this year – a first both for Iran and Lebanon's Hezbollah. While Hezbollah leader Nasrallah sees his organisation in a state of siege ... END_OF_DOCUMENT_TOKEN_TO_BE_REPLACED

In "Sprache und Sein" (Language and Being) the activist Kubra Gumusay critically examines the function of language – the narratives that reflect and determine the realities of ... END_OF_DOCUMENT_TOKEN_TO_BE_REPLACED

Award-winning Indian author Rahman Abbas spent time in Europe last year researching "the Holocaust and the future of minorities in India and Pakistan". To mark VE Day on 8 May, he ... END_OF_DOCUMENT_TOKEN_TO_BE_REPLACED

A muezzin call to prayer via loudspeaker is legally permissible in principle, but various basic rights and interests must be considered, explains professor of law Mathias Rohe in ... END_OF_DOCUMENT_TOKEN_TO_BE_REPLACED

Repression and despotism takes many forms. Yet as varied as these phenomena are, they all share a common core, argues Tarek Azizeh. Revolutions accompanying the struggle for ... END_OF_DOCUMENT_TOKEN_TO_BE_REPLACED

END_OF_DOCUMENT_TOKEN_TO_BE_REPLACED
Social media
and networks
Subscribe to our
newsletter