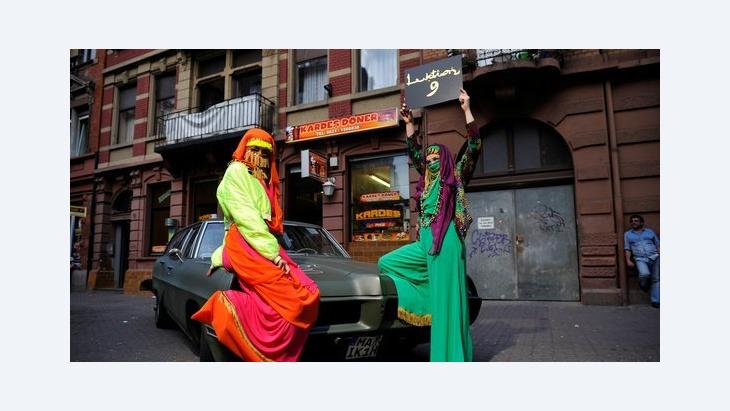 In the "Koran School" theatre project at the National Theatre of Mannheim, theatregoers get to know places and people in their town that they're unlikely to have had much contact with before. Susanne Kappe reports

It's an intensive course on Islam and migration in Germany – a hands-on, interactive experience. A Koran diploma in sixteen lessons? Maybe not that, but the evening certainly does provide a significant insight into the everyday life of Muslims in Germany.

'Koran School', the title of the project, might for some theatregoers initially evoke unpleasant associations. But this is something the project organizers are consciously playing with. The idea is for people to let themselves in for things they're not used to; to challenge their preconceptions. There is, of course, an additional educational aspect, and that's why the piece is structured into lessons.

Different subjects are addressed in different locations, like individual teaching units. The aim is for non-Muslims to overcome their reservations in dealing with Muslims. For the Muslims whose voices are the piece, education is an important element of their faith: they themselves once had to read about what it means to be a Muslim and form their own opinion on the subject.

Immersing oneself in everyday Muslim life 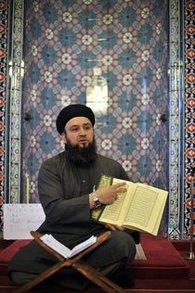 The revelation of the Koran, told in Mannheimer dialect: Bektas Cezik, Koran teacher at the Fatih Mosque

​​School begins on the forecourt of the National Theatre, where first of all the curious theatregoers are all given Muslim names. Klaus becomes Musan, Michaela becomes Suveda, and Martin is Cihad. It's not so easy for a man called Christian suddenly to think of himself as Hassan.

But it immediately becomes clear what this is all about: really immersing yourself in everyday Muslim life, without over-intellectualizing it, without reservation, and above all without fear.

To start off with there is a brainstorming session in which the audience gets all their ideas and prejudices about Islam off their chest, covering everything from fasting to Salafists. Immediately afterwards we set off to test these against reality.

We are taken by taxi (the fact that the driver looks Arab and is called Tahir is probably a coincidence) to Jungbusch, a part of town with a similar reputation to Neukölln in Berlin: migrant neighbourhood, problematic, poor. There is an element of truth to this, as the visitors will discover for themselves. But their impression will also be enhanced by other characteristics: friendliness, openness, diversity, and joie de vivre.

Revelation of the Koran in the local dialect

This impression is communicated by more than just the Sunni community's Christmas greeting poster stuck on a column of the Fatih Mosque, or by the imam who relates the story of the revelation of the Koran in the local Mannheimer dialect and promises to reward his patient listeners with gummi bears. The children shouting outside in the playground as we sit in the mosque's impressive prayer room and the hip-hop music playing in the street also convey this sense of a life both vivid and perfectly normal.

Individual portraits of Mannheim Muslims, whose personal stories are conveyed with intensity by actors from the theatre, demonstrate how Islam can be lived in a variety of different ways.

A young woman in a hairdressing salon tosses her long hair as she explains how important her faith is to her, and that as far as this is concerned she doesn't let anybody tell her what to do – not even her family. At the conference table in the advertising agency a hardworking boss reveals his disappointment that the good relationship his children had with their female teacher broke down over the fact that his wife wears the full-body veil. 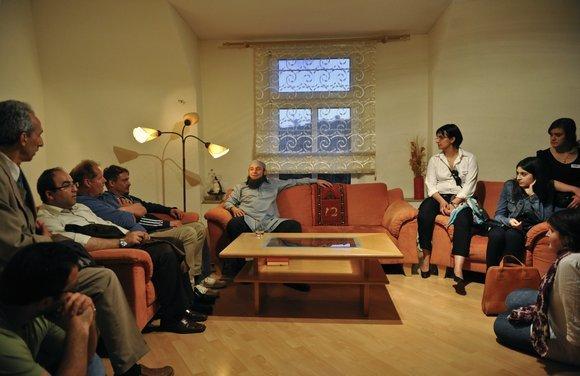 Thirty "majority society" Germans sit crammed into the living room of a religious man with a full beard, a family man of Turkish origin. They are listening, rapt, as he tells them his life story. Sound unlikely? Yet this is exactly what happens in the Mannheim "Koran School"

​​A female refugee from Iraq tells in broken German of her depressing life in the asylum seekers' hostel, and her experience in a chapel of a quiet peace that moved her to tears. The deeply religious family man who receives the guests in his living room may not believe that Christians will be admitted to Paradise, but he even wishes "that the Koran is wrong, so that you will be admitted to Paradise too".

Fiction for some – for others, faith

We then take the tram for an interactive return journey to the National Theatre. Over the loudspeaker a real muezzin calls us to prayer – the final big challenge for the curious cultural explorer. For those who dare to join in (and for the faithful), the next step is taking off our shoes, unrolling the prayer mat, copying the imam's movements: learning by doing, familiarising ourselves, overcoming inhibitions. Fiction for some – for others, faith.

The final prayer functions as a self-test for each individual. How open am I? Am I open to things that are unfamiliar? There's no diploma at the end of the course, but the willingness to learn and understand earns rousing applause.

The 'Koran School' grew out of an initiative by the National Theatre of Mannheim, which regularly runs projects in the city that go beyond the theatre itself, or involve the participation of local people. Nina Gühlstorff and Dorothea Schröder, the two directors of the project, also already have experience in staging interview-based city projects in several towns.

There is a logic to their choice of Islam as the subject to address in Mannheim. The Yavuz Sultan Selim Mosque here is home to one of the biggest mosque congregations in Germany, and foreigners in general are very much a part of the townscape. On the other hand, there is also a lack of daily contact between the various population groups in the city, and one encounters the same resentments that are found elsewhere in Germany as well.

Excellent cooperation with the Muslim community

The directors conducted around fifty interviews with people of very different origins and religious orientations. These were used as a basis for the actors' monologues, which are intended to reproduce voices that are otherwise seldom heard in the public sphere. The local context is a key element in this. The piece is specifically about the life and religious practice of Muslims in Mannheim, not some abstract Islam somewhere in Europe. 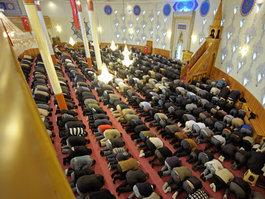 Intercultural metropolis Mannheim: Around 30,000 Muslims live in Baden-Württemberg's second-largest city, and the Yavuz Sultan Selim Mosque here is one of the biggest in Germany

​​According to the dramaturge Jan-Philipp Possmann, the cooperation with the Muslim community was excellent. The fact that only one mosque is used as a location has nothing to do with lack of interest from other congregations, he says; it is simply a question of the timeframe that has to be adhered to.

Hardly anyone voiced any objections in the run-up to the project. Some commentators criticized the production for not maintaining the necessary critical distance to the religion. Possmann's response is that there are hardly any Muslim characters in contemporary theatre. "We have Christian characters and Christian subject matter on stage all the time, and no one ever says we're not maintaining the necessary distance to them. For us, in the first place, the most important thing was that we address the topic at all."

This is also the main aim of the project: to introduce an unknown topic, to convey knowledge, and in doing so to break down prejudices, using simple and sometimes very private questions. "What does it mean to wear a headscarf? How does it feel to be a Muslim?"

The fact that the perspective in this instance is a non-Muslim one is the logical consequence of the way the project came about. Its initiators also have no illusions about the fact that 90% of the audience are non-Muslims. What they want to do, though, is to set in motion a process between the Muslim community involved in the piece and the visitors, who encounter each other on the evening of the performance.

If those present that evening acquire a different perception of their surroundings, the 'Koran School' will have achieved its purpose. Everyone moves up a class. The next educational target is for them to apply this newly-acquired knowledge in their everyday lives.

'Koran School' runs for a total of ten performances in May, June and July at the National Theater Mannheim, Germany

Home
Print
Newsletter
More on this topic
Intercultural Theatre: ''Radio Muezzin'': Otherness as a FetishIranian Theatre in Germany: The Dead Cannot Be CensoredInterview with Neco Celik: ''I Am an Integration Objector''
Related Topics
Dialogue of Cultures | Intercultural Dialogue, Dialogue of Religions, Integration in Germany, Islam in Europe, Islam in Germany, Koran | Quran, Mosques in Germany, Muslims in the West, Places of Dialogue
All Topics

The Hanau terror attack showed just how dangerous racist conspiracy theories can be. And yet it is a threat that continues to be underestimated. Commentary by Daniel Bax END_OF_DOCUMENT_TOKEN_TO_BE_REPLACED

How can we truly appreciate the richness of cultures not our own? In her recent book "What is Islamic art? Between religion and perception", art historian Wendy Shaw explains the ... END_OF_DOCUMENT_TOKEN_TO_BE_REPLACED

In his controversial book published in 2020, French author Pascal Bruckner describes anti-Muslim sentiment as a fiction, claiming that the term "Islamophobia" is being used to ... END_OF_DOCUMENT_TOKEN_TO_BE_REPLACED

Islam scholar and social anthropologist Marie-Christine Heinze is head of an academic exchange project with the University of Sanaa on "Post-conflict Reconstruction in Yemen". In ... END_OF_DOCUMENT_TOKEN_TO_BE_REPLACED

Comments for this article: Intensive Course in Muslim Life in Germany

END_OF_DOCUMENT_TOKEN_TO_BE_REPLACED
Social media
and networks
Subscribe to our
newsletter