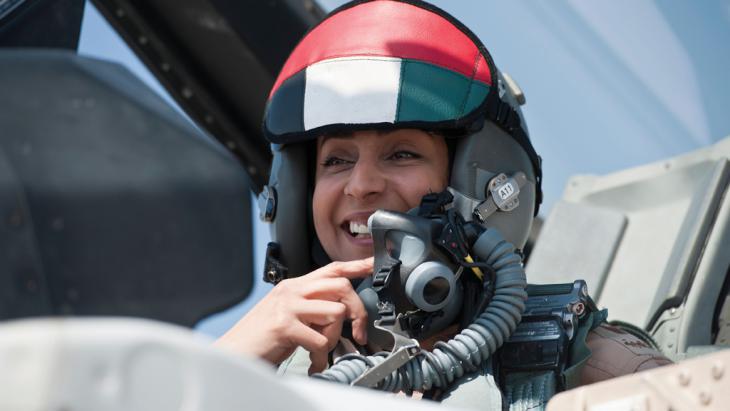 The international alliance against IS

The American strategy of conducting air strikes in Syria remains dubious and unclear. According to Karim El-Gawhary, air strikes can only be part of a broader military strategy, and the West needs to address the genesis of IS

It is an unwritten law of military planning that any military action must have a clear strategic objective. In the case of the aerial bombardment of Syria, such an objective has not been defined.

What is the objective of the air strikes in Syria? They are meant to combat IS. Yet in the worst-case scenario, IS could resort to guerrilla tactics, which would make it even more difficult to combat. IS, therefore, cannot be dealt with by military means alone.

Is the objective then to decrease the number of refugees flowing over the borders? This would be a dubious strategy, as people are not only fleeing the jihadis of IS but also the air strikes.

Perhaps the objective is to prevent any more Western journalists and aid organisation staff from being decapitated on camera. The opposite case is the more likely result: the brutality will only increase.

Is the aim to prevent international jihad tourists from travelling to Syria and then later returning to wreak havoc at home? This phenomenon is difficult to thwart from the air. In reality, aerial bombardment is likely to result in a further radicalisation of the jihad tourists and an increase in the threat of terrorist attacks.

Is the objective to help the people of the region? If so, then one has to pose the question as to why the war in Syria was simply allowed to continue for so many years. 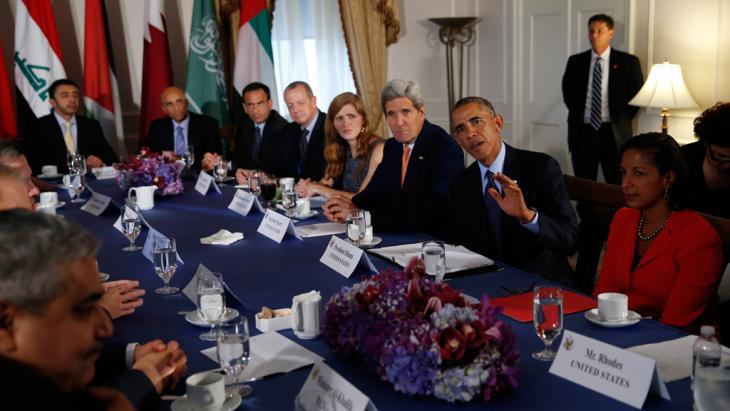 Delegations from the United States and Iraq met in New York on 23 September to discuss the situation in Syria. In the US delegation were (facing the camera from right): National Security Advisor Susan Rice, US President Barack Obama, Secretary of State John Kerry and US ambassador to the UN Samantha Power. The US, Bahrain, Jordan, Qatar, Saudi Arabia and the United Arab Emirates are currently flying air strikes against the Islamic State group in Syria and Iraq

No Western boots on the ground

Air strikes can only be a part of a larger military strategy that ultimately includes ground troops. At the moment, no country in the world is prepared to send troops to fight in the Syrian quagmire. Instead, a desperate effort is being made to find "moderate" Syrian rebels to arm. However, after allowing four long years of slaughter and murder to take place in Syria, it is only natural that there are not many moderates left.

The rebels are fragmented and almost all of them support some kind of Islamist ideology. Without any outside assistance, most fighters had nothing else to fall back on but their faith and the motivation of becoming a martyr in paradise. Living under daily bombardment by the Assad regime has led a number of those remaining in Syria to view IS as their salvation.

Every attempt to fight IS is certain to fail if no attempt is made to address how this terrorist group came about, which brings us straight back to the Assad regime and the great danger of doing the dictator a huge favour by bombing part of his opposition into oblivion.

It is not enough to just train and equip effective rebel ground troops in Syria to fight IS, a reasonable political alternative to Assad is also essential. After all, most of the Syrians who are still standing by the regime are doing so out of fear of what could follow. 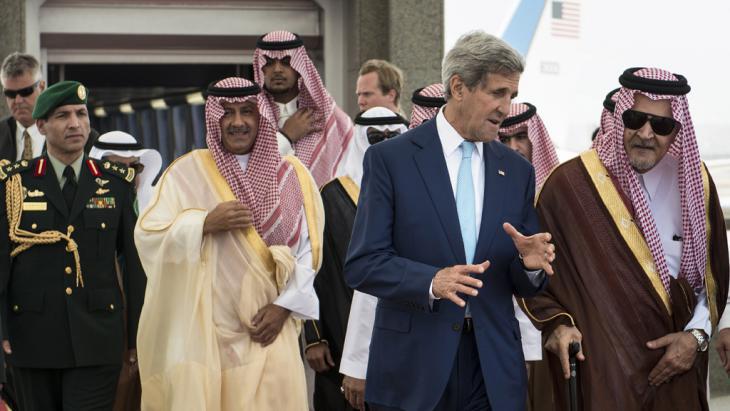 "By including the deployment of air power from Jordan, Saudi Arabia, and the UAE, Obama is preventing the charge that the latest military campaign is merely a new Western crusade. The problem with this strategy, however, is that it is like asking the fox to guard the hen house," says Karim El-Gawhary. Pictured above: US Secretary of State John Kerry (second right) speaking to the Saudi Foreign Minister Saud al-Faisal

The role of the Arab allies

And while we are looking into the causes of emergence of IS, we should consider the involvement of Arab states. It certainly makes sense to integrate Arab states into the military campaign: by including the deployment of air power from Jordan, Saudi Arabia, and the UAE, Obama is preventing the charge that the latest military campaign is merely a new Western crusade. However, the problem with this strategy is that it is like asking the fox to guard the hen house. This is because the undemocratic Arab regimes, particularly the Gulf States with their arch-reactionary interpretation of Islam, have a great deal to do with the emergence of IS. As such, instead of being part of a short-term military solution, they are much more part of the long-term problem.

The West is fighting here with the tried and trusted methods of military might that have thus far never succeeded in changing the balance of power in its favour. Western powers, in alliance with traditional undemocratic Arab kings and emirs, find themselves locked in a battle against reactionary jihadis willing to do everything in their power to turn back the clock to the time of the Prophet Muhammad.

Somehow, the whole thing stinks from top to bottom.

Home
Print
Newsletter
More on this topic
The Middle East policies of Europe and the US: Mistakes must not be repeatedShifting alliances in the Middle East: My enemy's enemy is my friendBritish fatwa against IS: Breaking the spell of a poisonous ideology
Related Topics
'Islamic State' | IS, Assad regime, International terrorism, Jihadism | Jihadists, Syrian opposition, U.S. policy in the Middle East
All Topics

Twenty years after 9/11, the world is faced with the dual challenge of Islamophobia and anti-Westernism. Ahmet Kuru argues that Muslims in the West, well versed in both Western ... END_OF_DOCUMENT_TOKEN_TO_BE_REPLACED

Two decades after the attacks of 11 September 2001, the West faces the shattered debris of its failure – not only in Afghanistan, but also in Iraq, Syria, Libya and Yemen. What ... END_OF_DOCUMENT_TOKEN_TO_BE_REPLACED

Twenty years after 9/11, the United States is recalibrating its war policy. However, its assertions that the era of endless wars is over are a myth, writes Maha Hilal END_OF_DOCUMENT_TOKEN_TO_BE_REPLACED

The coronavirus pandemic has turned lives upside down all over the world. In the Middle Ages, however, people lived with epidemics all the time. The best and most famous ... END_OF_DOCUMENT_TOKEN_TO_BE_REPLACED

While agreeing last week to a withdrawal of US combat troops from Iraq, neither Iraqi nor US leaders can admit publicly how much they need each other. By Cathrin Schaer END_OF_DOCUMENT_TOKEN_TO_BE_REPLACED

Reading Hassan Blasim's God 99 is an immersive experience of grief and exaltation, anger and disgust, writes Marcia Lynx Qualey. We join the Iraqi narrator as he sits around in ... END_OF_DOCUMENT_TOKEN_TO_BE_REPLACED
Author:
Karim El-Gawhary
Date:
Mail:
Send via mail

END_OF_DOCUMENT_TOKEN_TO_BE_REPLACED
Social media
and networks
Subscribe to our
newsletter