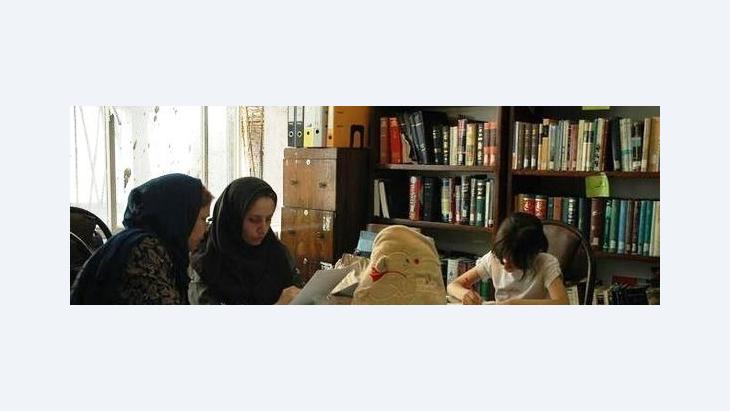 The Iranian ''Encyclopaedia for Children and Young People''

﻿In Iran, most of the encyclopaedias are translated from foreign languages. Touran Mirhadi therefore decided to publish an encyclopaedia with a decidedly Persian perspective. But there are no plans to include a chapter on the Holocaust. Alessandro Topa visited Mirhadi and her team in Tehran

Touran Mirhadi is a tall woman, who in spite of her 81 years always sits bolt upright in front of all those who enter her office on tiptoe every five minutes. Surrounded by encyclopaedias from all over the world, she devotes her friendly attention to each and every visitor.

"So now the working group plans to write the section on traditional medicine," she enquires of her assistant, who has presented her with a memorandum for her information. "I think that's very sensible, they've recently started teaching alternative medicine here at Tehran University."

The assistant is barely out of the room when a female student appears. The biology undergraduate, who is in her fifth semester, wants to contribute to the encyclopaedia project. Around 90 percent of the NGO's 250 volunteers are women. Divided up into 35 specialist groups, they are all writing contributions to the first Persian encyclopaedia for children and young people.

It is a mammoth project that has already been going on for 25 years. During this time, 10 of the 27 planned volumes have been published. It has meanwhile even been possible to publish two volumes each year, although the project doesn't receive any state funding, and is only made possible by private sponsorship and the commitment of numerous helpers.

Gifts and prizes are exhibited in a glass case in the entrance. secretary is especially proud of the Book of the Year Award, received by the NGO in 1998. A congratulatory letter from the then President Chatami, a leader who at least never tired of emphasising the fundamental role of a culture of reading for a functioning and critical public, underlines the significance of the award: A groundbreaking achievement, from which more and more students, teachers and parents are profiting. 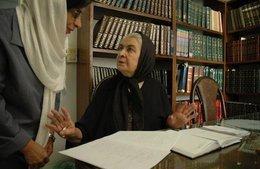 Struggling with the peculiarities of Iranian historiography: Touran Mirhadi in her editorial offices in Teheran

​​"We were the children of a particular phase of Iranian history," Touran Mirhadi recalls her youth in accent-free German. The slight French inflection of her Latinisms are the only clue to the fact that the German-Iranian Mirhadi, who was born in Tehran in 1927 as the youngest child of Grete Dietrich, a German, and Fazlollah Mirhadi, studied at the Sorbonne.

"It was the phase during which we were taught that we Iranians had achieved nothing culturally," she says, remembering her school years. "And for this reason, we were told we should imitate the Europeans in everything." – Like her father, who came on a grant programme to the German Empire in 1909 to study engineering. When he returned to Tehran with his wife after World War One, Iran stood on the threshold of the Reza Shah era, a leader who pushed through Iran's process of modernisation into a secular national state in the 1920s and 30s.

"Intellectuals and teachers were the first to notice that the alienation from cultural roots represented a danger," says Mirhadi, explaining the encyclopaedia project's long gestation process. It was the translations of foreign encyclopaedias, in which the reader is repeatedly confronted with aspects and viewpoints that do not figure on his cultural horizon, that finally convinced her of the need to produce a genuinely Persian encyclopaedia.

But it would be decades before the basic conditions necessary for such a project were in place, in the early 1980s. Until then, the teacher published textbooks and worked as head of a renowned school in which she focused on self-management and group work.

In the "Encyclopaedia for Children and Young People", today every third article is related to Iran in some way. "All of us here are taking part in a learning process in which we are re-appropriating our heritage," says Mirhadi. 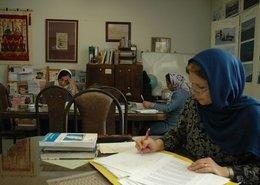 Is there a right life in the wrong one? The umbrella organisation the Children's Book Council of Iran, founded in 1962, is located one floor below Mirhadi's NGO

​​Although the encyclopaedia genre is not new in Persian literary history – Avicenna composed encyclopaedic works at the onset of the High Middle Ages – publication of the first encyclopaedia to be written in accordance with modern standards did not begin until 1966, as a translation of the Concise Columbia Viking Desk Encyclopaedia, which was actually extended with 10,000 original articles composed by Iranian experts.

Since the Revolution, several ambitious encyclopaedic projects were launched, most of which incorporate a Twelver Shiite standpoint, but which are not universal encyclopaedias due to their focus on the Islamic world.

The specialist group where most of the debates take place is that of the historians – despite the fact that, as Mirhadi puts it, the aim is of course to produce a kind of historiography that is aligned with "elementary questions and facts". The evidential requirements are especially strict here, and the need for argumentation greater than in the case of ideology-resistant subject matter.

In a country where the greatest challenge in the long-term can only involve processing the events of recent history and finding answers to questions concerning integrative traditions of political identity, the encyclopaedia could make a pioneering contribution.

Only recently, an application to Tehran City Council to name a street after Prime Minister Mossadegh, the leader overthrown in a 1953 coup orchestrated by the CIA on behalf of the United Kingdom, failed. In the early phase of the Revolution, the former Pahlavi Boulevard was briefly named after this symbol of a democratic Iran, before the capital's main artery received the name "Vali-Asr", in honour of the 12th Imam as "patron of the epoch".

World history is no less problematic. When we come to the subject of the Holocaust, the flow of words becomes more hesitant. "No, there is no article on that," says the elegantly clad woman. Although she usually likes to emphasise her words with her hands, she is suddenly motionless. "No, there is nothing in the planning either," she explains in response to the demand for more information, in view of the fact that the letter "he" is the penultimate letter in the Arabic-Persian "Alefba" alphabet. 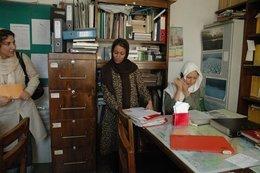 Little concern for the dominant political and moral experience of the western world in the 20th century: students doing research work at the Encyclopaedia NGO

​​She somewhat half-heartedly refers to the article on Germany in the third volume. It unambiguously portrays Adolf Hitler as a criminal dictator, and also mentions the mass murder of Jews, Sinti, Roma and people of other ethnicities and parties. But the industrial monstrosity of the murders and the gruesome nature of the Nazis' racial fanaticism are not mentioned, let alone described.

Why not? Touran Mirhadi leans back and pulls on her headscarf, which she keeps tightly tied with a firm knot at her neck. It's an awkward moment of reflection for both of us.

Had Ahmadinejad's utterances not cause her great distress? Does she not see the abyss of historical ignorance that exists in Iranian society with regard to the Holocaust? Is it not a tragic error to conceal the history of European Jews from Iranian youth, thereby robbing them of the opportunity to be able understand the dominant political and moral experience of the western world in the 20th century?

"The Second World War devastated me," says Mirhadi after a pause. "To this day, I still wonder about the causes of all this violence." She determinedly explains her pedagogical commitment as a consequence of this shock and against a backdrop of conviction that the catastrophes of the 20th century can be attributed to inappropriate education:

"If people don't develop their own will, they become manipulable," says the woman who in the 10th chapter of her book "Mother – Fifty Years of Life in Iran" lucidly describes how her own mother was convinced by the men in the "Brown House" as it was known all over town, of the necessity of a Greater Germany which must, in accordance with its destiny, ascend to the status of world power.

Little Touran soon feels emboldened enough to taunt Jewish schoolmates. But one of those Jewish schoolmates – a courageous girl whom Mirhadi thankfully mentions her by name in her book – soon convinces her of the absurdity of anti-Semitism.

The question of exactly why no article on the Holocaust is planned for the "Encyclopaedia for Children and Young People", remains unanswered. Perhaps because any entry that could be deemed to carry a whiff of a 'Zionist conspiracy' might mean that the Ministry of Culture and the Islamic leadership would no longer authorise any print runs. Perhaps because Mirhadi believes that the article on Germany has already sent out a signal of sorts.

But also because quite clearly, as an Iranian Mirhadi's mind is on totally different political and moral fundamental experiences, around which is clustered the long-term memory of a nation and that of the prevailing cultural climate. "Do you know the book 'Confessions of an Economic Hit Man?" is the last question she asks before showing us the text archive.