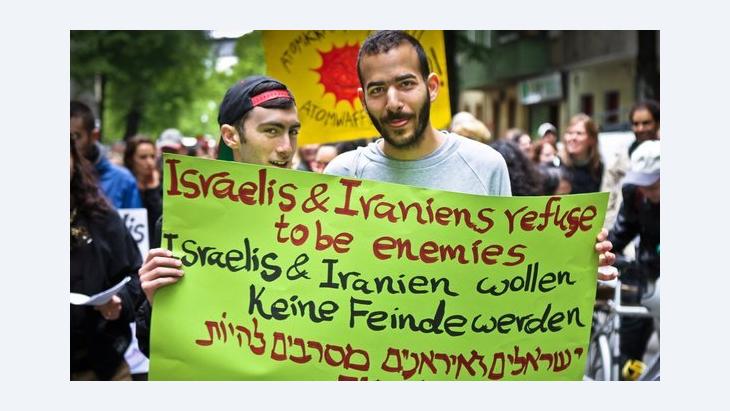 The Iranian-Israeli Circle
''We Should Hate Each Other''

﻿Israeli and Iranian students in Berlin have forged an anti-war alliance to express their opposition to war, sanctions and occupation. They regard the nuclear conflict between their two countries as an artificially created issue that serves to keep both governments in power. By Marian Brehmer

It is not always easy to break down the walls that politics sometimes builds between people. But there are those who refuse to accept the enmities imposed by their governments, such as the much-publicised antagonism between Israel and Iran. Aren't we actually much more alike than our governments would have us believe, they ask as they try to come to terms with the issue of "identity" in a creative way. A campaign initiated by an Israeli graphic designer this spring was one such expression of humanity. He spread the slogan "Iranians, we love you" via Facebook, receiving massive media coverage in return.

In Berlin, Israeli and Iranian students who want to protest together against their countries' warmongering have created an alliance. The "Iranian-Israeli Circle" wants to inform people about the mechanisms behind the nuclear conflict and to take a stand against "war, sanctions, occupation and state oppression".

At the first joint demonstration by Iranians and Israelis in Berlin-Kreuzberg, the banners held high were written in Hebrew, Persian, and German. The initiative also wants to hold lectures explaining that not only the people with all their concerns and anxieties are similar, but also the strategies of their two governments.

According to this point of view, the nuclear conflict is primarily a tactic for diverting attention away from both countries' domestic problems. In Iran, the support base for the current government is slipping, particularly among young people – a development that became only too obvious with the protests that erupted during the 2009 elections. Especially among the country's youth, the feeling of alienation toward the ideological foundations of the Islamic Republic was never as great as it is today.

In Israel, Benjamin Netanyahu has blocked any possible solution to the Middle East conflict with his aggressive settlement policy. Iran and the allegedly impending "nuclear holocaust" provide a convenient way to cover up his own responsibility for the impasse. The social protests of young Israelis remain largely unheard. 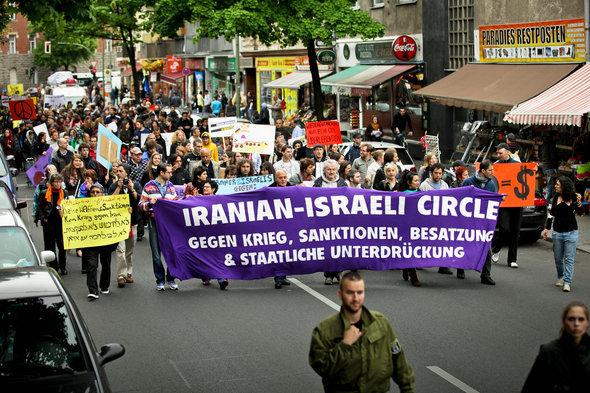 The idea for the friendship circle came about when Israeli Defence Minister Ehud Barak visited Berlin in March. A submarine deal was made during that visit, a deal that would become the subject of an article in the German weekly news magazine Der Spiegel around two and a half months later, sparking a debate about German arms sales to Israel.

While Barak was at the Israeli Embassy, 10 Israeli students gathered in front of the building to demonstrate against their government's foreign policy. Out of this loose protest group grew the idea to make common cause with the Iranians in Berlin. The Israelis called for support on Facebook and soon received a response from the other side. People met and exchanged views – a fruitful process that also involved examining each other's stereotypes.

Arezu, an Iranian, has lived mostly in Europe over the past 10 years. Growing up in Iran means automatically learning to hate the state of Israel, she says. "Death to Israel" is a slogan that is heard constantly in Iran. The television stations only broadcast negative reports about the country, and once a year, on Quds day, the government calls on citizens to parade through the streets demonstrating against the "Zionist regime". 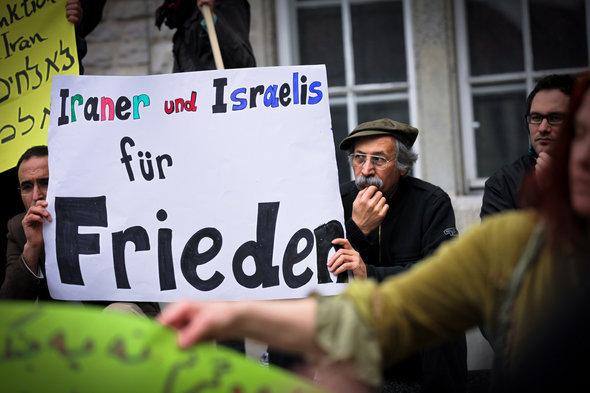 Stop the sabre-rattling: both sides emphasise that their peoples have no reason to hate each other

Hostility as a power tactic

"When we met with Israelis in Berlin, it was obvious that we are all in opposition to our governments," says Arezu. "We made jokes about it, that we are actually enemies and should hate each other."

Arezu tries to draw a distinction between the illegal oppression of the Palestinians and a government that exploits this issue to its own ends.

Gal Schkolnik, an Israeli chemistry student, met Iranians for the first time in 2005 at a festival. They were women, most of them architects and lawyers. "Until then, I didn't even know that Iranian women were allowed to study subjects like that", says Gal. On television she had only seen images of women swathed in black and of mullahs shaking their fists.

"In a certain sense, the Iranians have it easier. They live in an authoritarian regime and know that they are being lied to by the media. In Israel, by contrast, we still feel a certain basic trust in our media. With us, the propaganda is more subtle."

Gal, too, had been unaware that her situation is not so very different from that of the young Iranians. "We are two peoples whose governments are not interested in the well-being of their citizens, but rather solely in staying in power. An artificially created war like the Iran conflict is ideally suited to that purpose."

The protests in Iran have entered their third week with no indication that Tehran is prepared to address the demands that are echoing through the streets. Radio Farda’s Hannah ... END_OF_DOCUMENT_TOKEN_TO_BE_REPLACED

Just as the Islamic Revolution fundamentally changed Iran 43 years ago and had an impact far beyond the country's borders, the current wave of protests sweeping the country is set ... END_OF_DOCUMENT_TOKEN_TO_BE_REPLACED

The death of Mahsa Amini at the hands of Iran's "guardians of morality" is only the latest, tragic example – in a neverending chain of state repression and excessive police ... END_OF_DOCUMENT_TOKEN_TO_BE_REPLACED

In "Iran. Die Freiheit ist weiblich", journalist Golineh Atai describes the dogged resistance of courageous Iranian women against the Islamic Republic and the mullahs who have ... END_OF_DOCUMENT_TOKEN_TO_BE_REPLACED

Iranian artist Parastou Forouhar has lived in Germany since 1991. Full of rage, just like the protesters, she hasn't yet given up on the idea of justice. By Julia Hitz END_OF_DOCUMENT_TOKEN_TO_BE_REPLACED

Fariduddin Attar’s "The Conference of the Birds", one of the seminal works of Islamic mysticism, has recently been published in sumptuously illustrated German translation. It ... END_OF_DOCUMENT_TOKEN_TO_BE_REPLACED
Author:
Marian Brehmer
Date:
Mail:
Send via mail

END_OF_DOCUMENT_TOKEN_TO_BE_REPLACED
Social media
and networks
Subscribe to our
newsletter