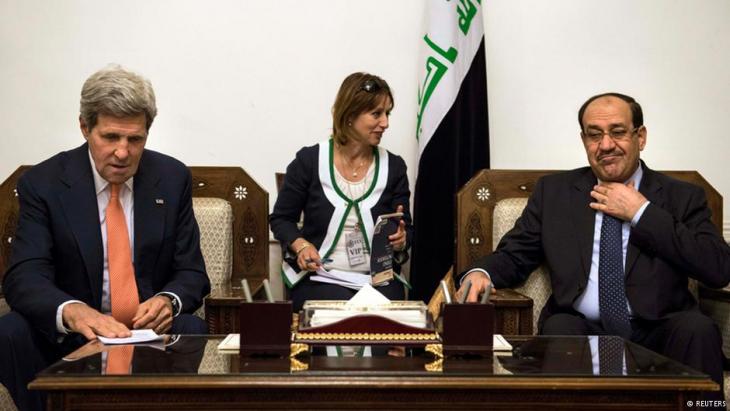 Iraq is in the grip of a devastating inner-Islamic religious war. The conflict has an inherent dynamic that cannot be stopped by presidential wishful thinking or a hurried visit to Baghdad by US foreign minister John Kerry. Stefan Buchen comments

It almost seems understandable. The United States imposed its blueprint for peace on Iraq in 2003. Some 4,500 soldiers fell enforcing the new order up until the troop withdrawal in 2011. The country is now busily exporting oil again. So it’s clear that the Americans don’t want to see all their hard work going down the drain only three years on.

US President Barack Obama has no great desire to sweep up the sharp-edged splinters left behind in Iraq by the policies of his predecessor, George W. Bush. Iraq needs a new government, says Obama: one that involves all ethnic and religious groups. This is a criticism directed at the Iraqi prime minister, Nouri al-Maliki, who has privileged Shia Muslims at the expense of Sunnis. From the US point of view, it is time for a new prime minister to introduce a policy of confessional equality for the benefit of the whole country. And as Iraq has to form a new government anyway after the recent parliamentary elections, this change of direction could go ahead on an absolutely democratic basis.

Obama’s demand sounds sensible and diplomatic. However, it is as unrealistic as it is hypocritical.

The region once known as the "Fertile Crescent" is in the grip of a devastating inner-Islamic religious war. In the territories still nominally regarded as "Syrian" and "Iraqi", Shia and Sunni forces are facing off with implacable enmity. This war has an inherent dynamic that cannot be stopped by either presidential wishful thinking or a hurried visit to Baghdad by Obama’s secretary of state, John Kerry.

Driven into the arms of the Mahdi Army

Normally embroiled in quarrels and in-fighting, Iraq’s Shia establishment is closing ranks, slipping under the wing of Grand Ayatollah Ali Sistani and into the arms of Muqtada al-Sadr’s "Mahdi Army". And behind this new unity among the Shia is Ayatollah Khamenei’s regime in Iran. Should al-Maliki lose his position as prime minister, his replacement will continue his sectarian policy of showing obligation only to the Shia.

The Iraqi army has disintegrated. The Sunni officers and soldiers have defected to the Sunni extremist group Islamic State in Iraq and the Levant (ISIS, also known as ISIL). The same goes for the Sunni tribal militias, which were once – as was the regular army – armed and trained by the occupying US forces as a bulwark against al-Qaida. This is the only possible explanation for the lightning advance of ISIS, which could perhaps better be described as a general closing of Sunni ranks.

Who is to form a government of national unity under these conditions? Worse than the lack of realism, however, is the hypocrisy behind Obama’s demand: he added that the US would not intervene militarily in favour of a particular ethnic or religious group.

Only an American president counting on short memories in both the West and the Middle East could make such a statement. After all, the United States did exactly that in the north-east of Iraq: covertly from the 1970s onwards, openly as of 1991. Secret CIA operations in the Kurdish territories, a no-fly zone north of the 36th parallel in the wake of Operation "Desert Storm", helping to set up the autonomous region of Iraqi Kurdistan after the 2003 invasion – step by step, Washington has supported and cemented the secession of part of the Iraqi state.

Iraqi Kurdistan is now practically an independent state, and is expanding as a result of the crisis. The Kurdish troops (peshmergas) have now occupied both the oil-rich city of Kirkuk and parts of Nineveh province, the capital of which is Mosul. 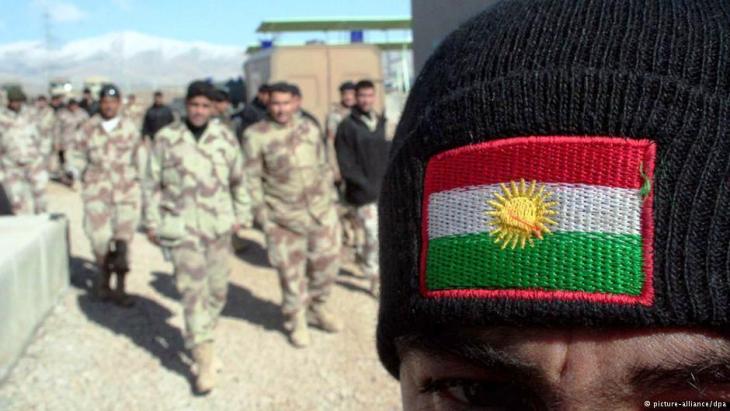 Kurdistan extends its sphere of influence: Kurdish troops (peshmergas) have occupied both the oil-rich city of Kirkuk and parts of the province of Nineveh

Despite his hypocrisy and lack of realistic insight, it seems that Obama can count on the verbal support of one European politician: the German foreign minister. "What’s key now is the formation of a government in Iraq that is inclusive of all regions and religions," Frank-Walter Steinmeier declared last Monday (23.6.2014) to the EU Council of Ministers in Luxembourg.

Western policy is driven by the fear of a new terror zone in the Middle East, which also constitutes a threat for Europe and the USA. But could it be that the spectre of the new terrorist group ISIS is clouding political judgement?

The victims threatened and killed by ISIS in the "Fertile Crescent" have so far been those they regard as their enemies: soldiers and sympathisers of the governments in Damascus and Baghdad, minorities such as Yazidis and Christians, foreign humanitarian aid workers and journalists. That is a terrible thing. However, it is also only the reverse side of the gruesome war being waged against the Sunnis by Syria’s President Assad, and now also by al-Maliki.

The West is perhaps making the mistake of subordinating everything else to its fear of ISIS. It could start correcting this with a critical revision of the term "caliphate". If it is possible to insult history, then this is what ISIS has done with its arrogant declaration that it has established a "caliphate".

SPIEGEL magazine’s reference to the medieval "drunken caliphs of Baghdad", who would make a poor role model for the modern Sunni zealots, is as accurate as it is amusing. Yet it distracts from the matter at hand. The medieval Islamic caliphate "inherited" the culture of ancient Greece and Persia and successfully integrated it with the new religion, Islam. It led the nomadic Arab culture towards becoming a settled Arab culture, one of the greatest intellectual transformations in human history. 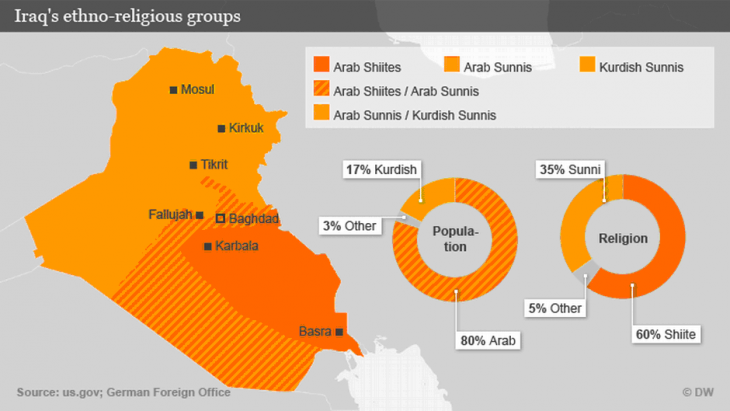 Struggling to find a political compromise: Iraq's Shia prime minister, Nouri al-Maliki, has rejected calls by Western leaders to form a national unity government representative of all the country's ethnic and religious groups

The caliphs used Greek and Persian columns for their palaces, madrassas and mosques. And what is ISIS doing? The zealots of the "Islamic state" are looting the ancient relics of Nineveh and selling them on the black market to finance their war! When the taz newspaper refers to ISIS’ conquests as a "checkpoint to a caliphate", one can only hope they meant to be ironic.

Germany’s politicians, a species devoid of the capacity for irony, tend to overstate their case. The country’s domestic intelligence service regularly warns that the spiritual cousins of "ISIS in Germany" – namely "the Salafists" – "want to abolish the liberal democratic system and erect a theocracy based on sharia." Can a motley band of 5,000 activists, either in Germany or in the "Fertile Crescent", really achieve such a thing? Yet this absurd assumption determines the political thinking and actions of "our" decision-makers.

It may well be that the US military will use air strikes against ISIS, particularly once they realise that the pious hope of a "unity government" in Baghdad will not be fulfilled. The Sunnis in the "Fertile Crescent" will then take a similar approach to ISIS as the Pashtuns in Afghanistan did towards the Taliban. They will sympathise with the group that fights uncompromisingly and radically, and makes sacrifices for "their side".

The Middle East is at a historical turning point. When Sunnis and Shia have fought their religious war in Syria, Iraq and beyond and exhausted themselves in the process, the warring parties and their mentors in Tehran and Riyadh will have to look each other in the eye and decide whether to return to the old order of states from the end of World War I, or to draw up new borders along the ceasefire lines between the confessions.

Anyone seeking a realistic position in this conflict must not dismiss this last option as taboo. And those who cannot forget the role model of a more tolerant civilisation in days gone by will have to console themselves with the thought that this ugly new order will perhaps only be temporary.

Stefan Buchen is a reporter for the German television programme Panorama.

Home
Print
Newsletter
More on this topic
Nouri al-Maliki: Not the right guy for IraqISIS and the Iraqi government: In the grip of the jihadistsIran's role in the Iraq conflict: An ally, but not a puppet
Related Topics
Al-Qaida, Assad regime, History of Islam, History of the Near and Middle East, Iraq War, 'Islamic State' | IS, Nouri al-Maliki, Sunni-Shia tension, Syrian Civil War, U.S. policy in the Middle East
All Topics

Short movies nominated for an Oscar often don't get wide public attention. But when one is about an Iranian girl seeking freedom from male domination by taking off her veil, ... END_OF_DOCUMENT_TOKEN_TO_BE_REPLACED

World-famous Iranian film director Jafar Panahi has been incarcerated for several months, even though Iran's Supreme Court overturned the verdict against him. Now, he has gone on ... END_OF_DOCUMENT_TOKEN_TO_BE_REPLACED

Young women are driving forward the protests against the Iranian regime, which have been going on for months. Literature provides clues as to why that should be, and why the ... END_OF_DOCUMENT_TOKEN_TO_BE_REPLACED

Visiting the country of her parents, murdered by the Iranian regime in 1998, German-Iranian artist Parastou Forouhar finds a changed society: hopeful, strong and courageous, ... END_OF_DOCUMENT_TOKEN_TO_BE_REPLACED

Ballet performances are prohibited in Iran. In her film "1001 Nights Apart", director Sarvnaz Alambeigi documents the history of dance in the Islamic Republic. By Fahimeh Farsaie END_OF_DOCUMENT_TOKEN_TO_BE_REPLACED

END_OF_DOCUMENT_TOKEN_TO_BE_REPLACED
Social media
and networks
Subscribe to our
newsletter