My last visit was in April 2017. I flew from New York, where I now live, to Kuwait, where I was giving a lecture. An Iraqi friend and I crossed the border by land. I was going to the city of Basra, in the south of Iraq. Basra was the only major Iraqi city I had not visited before. I was going to sign my books at the Friday book market of al-Farahidi Street, a weekly gathering for bibliophiles modelled after the famous Mutanabbi Street book market in Baghdad.

I was driven around by friends. I didnʹt expect the beautiful Basra Iʹd seen on 1970s postcards. That city had long disappeared. But the Basra I saw was so exhausted and polluted. The city had suffered a great deal during the Iran-Iraq war, and its decline accelerated after 2003. Basra was pale, dilapidated and chaotic thanks to the rampant corruption. Its rivers are polluted and ebbing. Nonetheless, I made a pilgrimage to the famous statue of Iraqʹs greatest poet, Badr Shakir al-Sayyab.

Iraq: the harsh and uncomfortable reality of war

American photojournalist Michael Kamber covered the Iraq War for the "New York Times" from 2003 to 2012. He is also winner of the World Press Photo Award. In this interview with Qantara.de, he explains how important it is to him to provide an accurate insight into and a comprehensive historical documentation of the war. This picture gallery presents a small selection of photos from his time covering the war in Iraq. 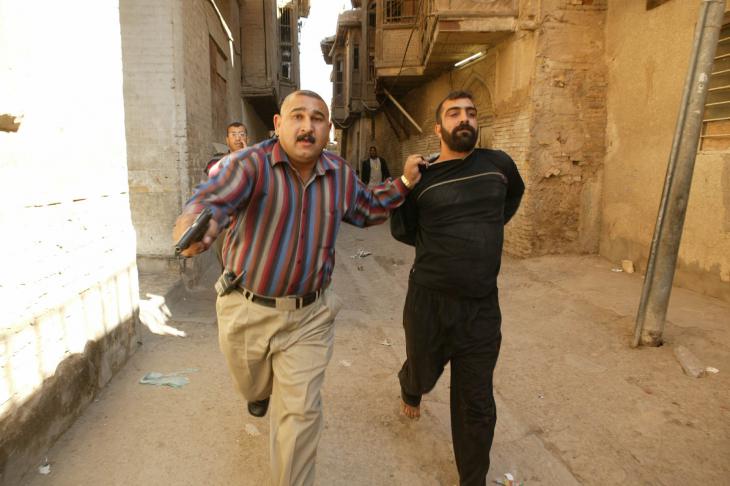 Baghdad, 13 November 2003: members of the Iraqi Police's Major Crimes Unit conduct the unit's first raid on the streets of Baghdad. The officer on the left is running to the home of a suspected criminal with a man arrested minutes earlier, who had agreed to identify the house in question. This unit was trained and equipped by the US and a number of European nations. 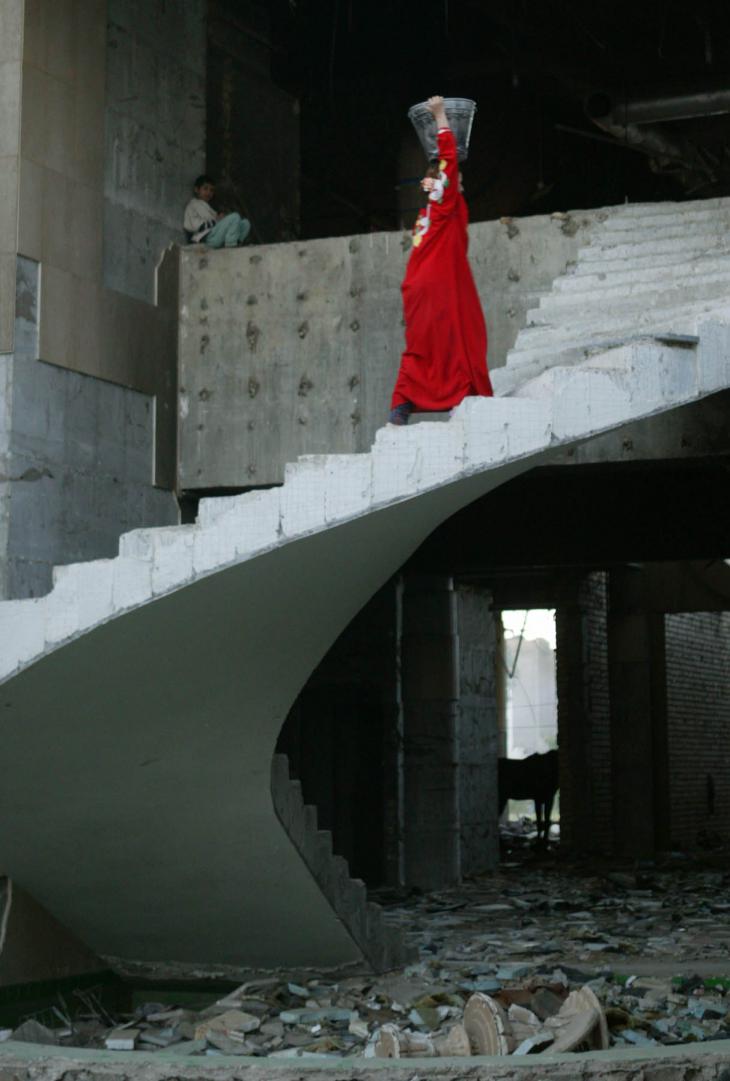 14 November 2003: the families of the woman and child pictured here are squatting in the ruins of the Iraqi Air Force Club, which used to be a meeting place and recreation site for Iraqi Air force officers and was looted after the war. 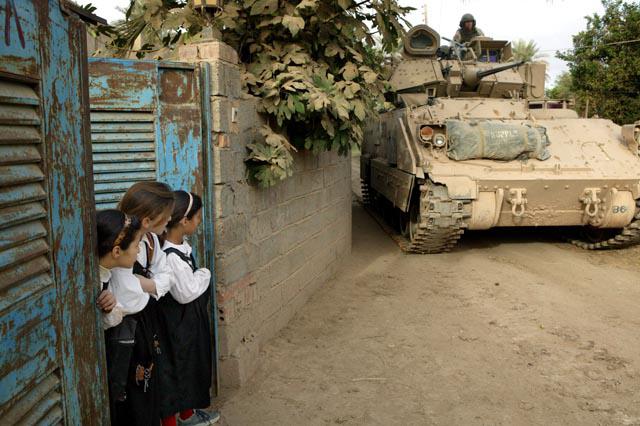 Balad, 2004: US Soldiers raid a neighbourhood and carry away Iraqi men suspected of being insurgents while being watched by a small group of schoolgirls. 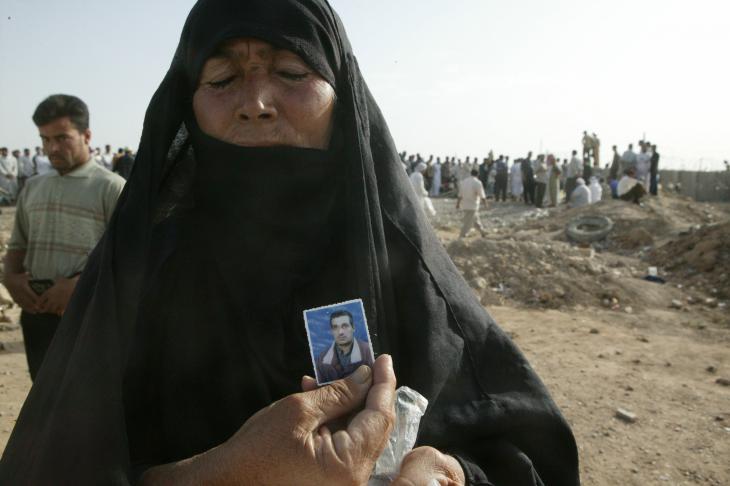 Abu Ghraib, May 2004: after the overthrow of Saddam Hussein, there was no legal system in place in Iraq. Overwhelmed by the situation facing them, the Americans frequently held Iraqi prisoners with little or no legal representation for months or years on end. Here, a mother waits outside Abu Ghraib holding up a photo of her son, who was arrested in an American raid and is being held in the notorious Abu Ghraib prison. 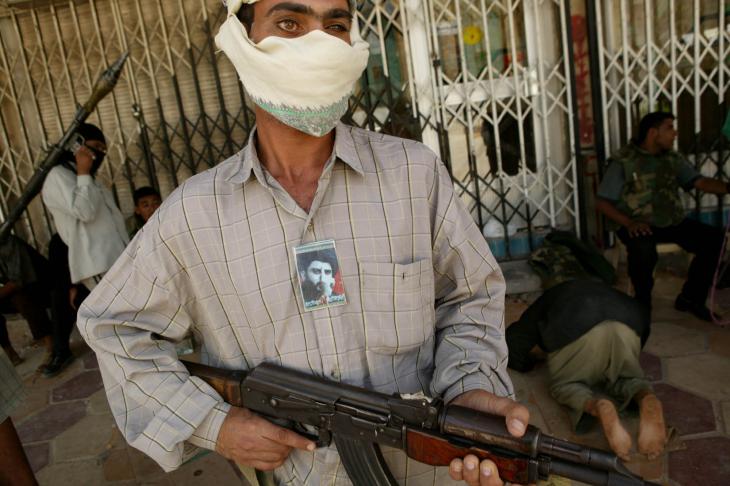 Karbala, 16 May 2004: fighters from the Mahdi Army, followers of the Shia cleric Moqtada Sadr, take up positions around the shrine of Imam Hussein in the centre of Karbala as they fight against US troops trying to dislodge them from the city. Here, a fighter with a picture of Moqtada Sadr on his chest holds a machine gun while another fighter prays in the background. 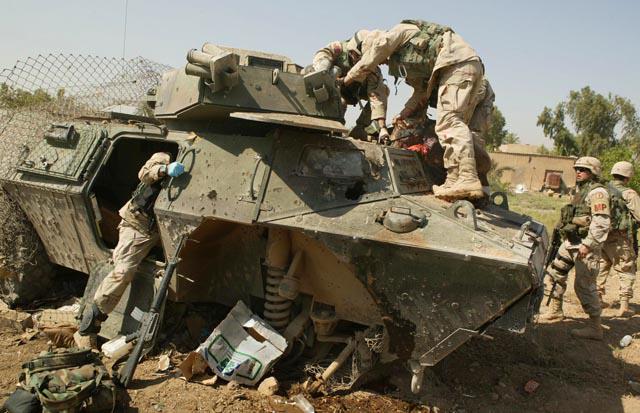 Sadr City, Baghdad, 5 June 2004: members of the 1st Cavalry Division and 759th MP Battalion pull the driver's body from an armoured vehicle after an improvised explosive device destroyed the vehicle and caused it to roll over three times. 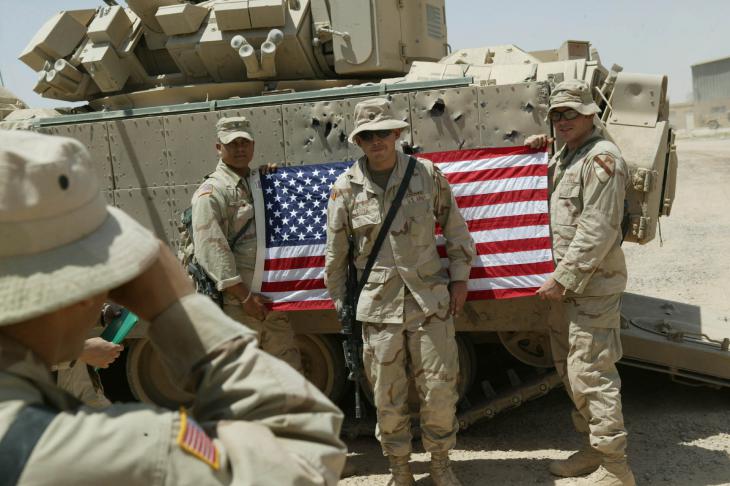 Sadr City, Baghdad, 14 June 2004: Ssg. Jessie Lopez, centre, has his picture taken at his re-enlistment ceremony. "I don't want to leave the Army and end up working at McDonalds," said Lopez. "Here, I get a steady cheque and benefits for my wife and two kids." Lopez re-enlisted for five more years and also got a $10,000 bonus. He expects to serve for 20 years and then retire. 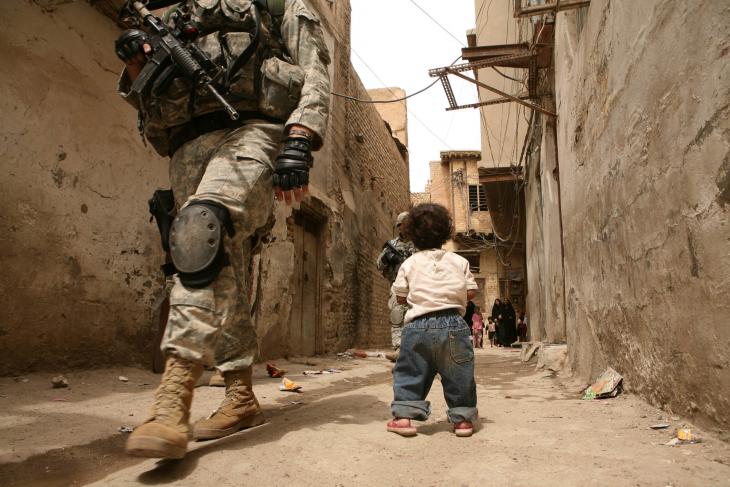 Khadamiya, Baghdad, 22 April 2007: members of the 82nd Airborne, 1-325, Delta Company on patrol on the streets of Khadamiya, a mainly Shia Muslim part of Baghdad. In 2009, a bomb blast in Khadamiya exploded near the most important shrine for Shia Muslims in the city, killing at least seven and injuring at least 20. 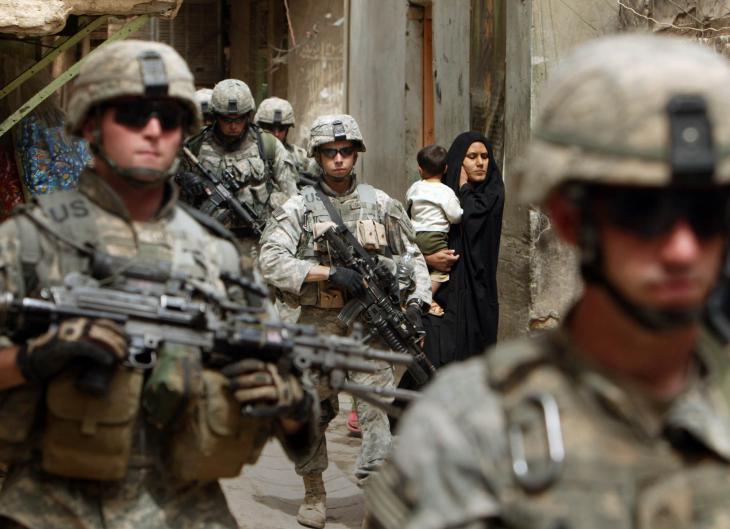 Khadamiya, Baghdad, 22 April 2007: members of the 82nd Airborne, 1-325, Delta Company on patrol on the streets of Khadamiya. Such patrols were often very dangerous for the troops. In March 2008, for example, five US soldiers were killed by a suicide bomber while on patrol in Baghdad. Three other troops and an Iraqi interpreter were also injured in the blast. 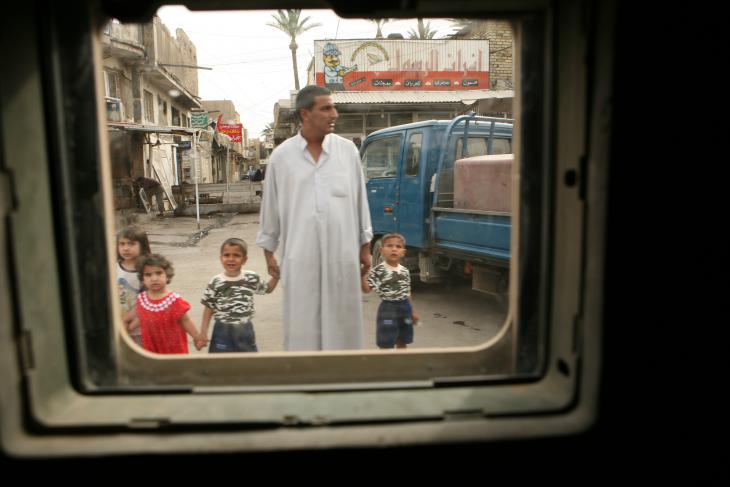 Baghdad, May 2007: Iraqi civilians as seen through the window of a US Army Humvee. 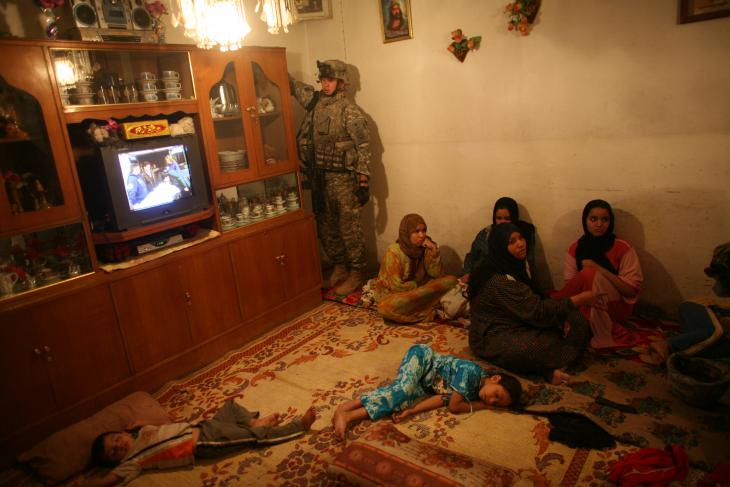 Ramadi, 2007: throughout their time in Iraq, US troops had to search private homes, searching for weapons and insurgents. Sometimes, large scale raids were planned for entire towns, such as the western Iraqi town of Haditha in 2005 when hundreds of troops searched houses simultaneously. Here, a US soldier searches a private home late at night while children sleep on the floor. 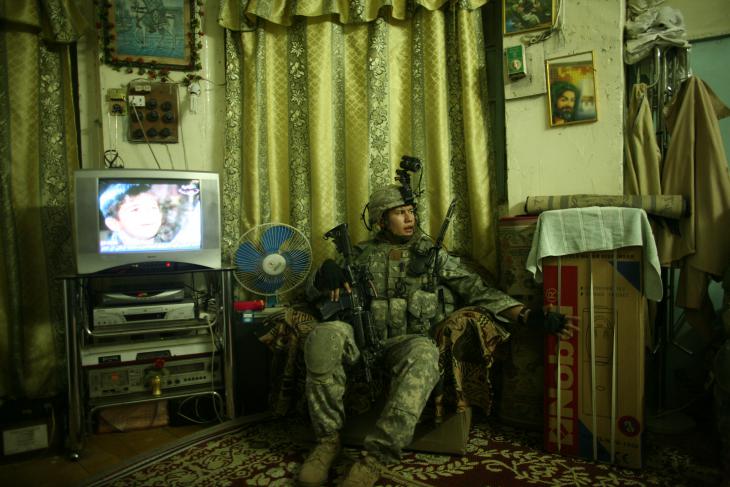 Iraq, 13 May 2007: a US soldier sits in an armchair during a search of a private home in Iraq. 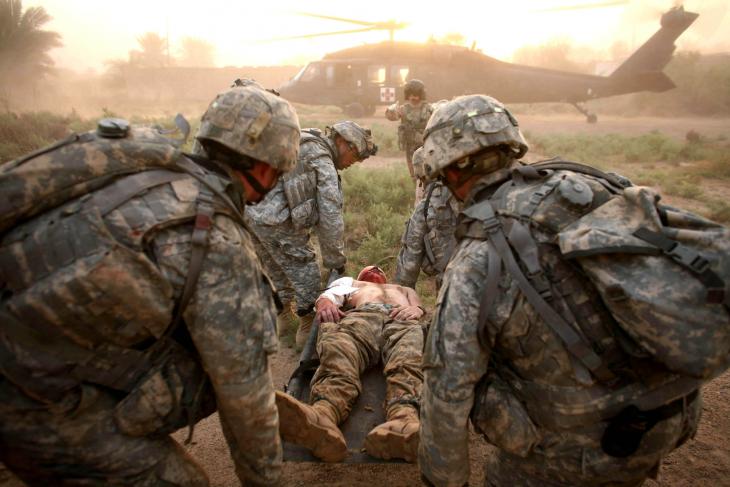 Latifiyah, 19 May 2007: a wounded US soldier is loaded onto a helicopter after suffering serious injuries from shrapnel from a land mine or IED that exploded and killed a comrade. The soldiers were taking part in the search for three US soldiers who had been captured several days previously. When the patrol continued with several other groups of US and Iraqi soldiers, another US soldier was shot in the forehead and critically injured by an Iraqi sniper. 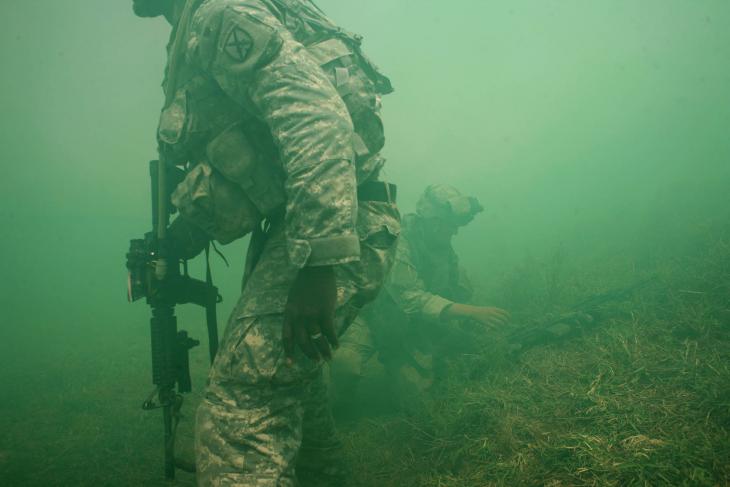 Latifiyah, 19 May 2007: US troops mark the landing spot for a resupply chopper with green smoke. The chopper brought them food and water. The original group of soldiers that started this patrol encountered tragedy after an explosion killed a US soldier and wounded 4 coalition soldiers. The soldiers were taking part in the search for three other US soldiers who had been captured several days previously.

Haunted by the ghosts of the dead

One of the few sources of joy for me during these short visits were the encounters with Iraqis who had read my novels and were moved by them. These were novels I had written from afar, and through them, I tried to grapple with the painful disintegration of an entire country and the destruction of its social fabric. These texts are haunted by the ghosts of the dead, just as their author is.

No one knows for certain how many Iraqis have died as a result of the invasion 15 years ago. Some credible estimates put the number at more than one million. You can read that sentence again. The invasion of Iraq is often spoken of in the United States as a "blunder", or even a "colossal mistake". It was a crime. Those who perpetrated it are still at large.

Some of them have even been rehabilitated thanks to the horrors of Trumpism and a mostly amnesiac citizenry. (A year ago, I watched Mr. Bush on "The Ellen DeGeneres Show", dancing and talking about his paintings.) The pundits and "experts" who sold us the war still go on doing what they do.

I never thought that Iraq could ever be worse than it was during Saddamʹs reign, but that is what Americaʹs war achieved and bequeathed to Iraqis.

A French artist has used photos of torture from Abu Ghraib for an oversized artwork at the Berlin Biennale. Reactions from fellow artists have been mixed, with some criticising ... END_OF_DOCUMENT_TOKEN_TO_BE_REPLACED

Since Ali Khamenei, Iran's most powerful man, has openly and unconditionally come out in support of Putin's war in Ukraine, logistical help is on its way, with an allegedly ... END_OF_DOCUMENT_TOKEN_TO_BE_REPLACED

The Palestinian militant organisation Hamas, with Hezbollah's help, is building up a military presence in Lebanon, the ultimate consequences of which could be devastating, writes ... END_OF_DOCUMENT_TOKEN_TO_BE_REPLACED

In this essay, renowned Lebanese journalist and writer Hazem Saghieh asks whether the Arab Levant, which stretches from Iraq in the East to Egypt in the West, will remain an ... END_OF_DOCUMENT_TOKEN_TO_BE_REPLACED

Extreme drought in Iraq has given German and Kurdish archaeologists the unique chance to examine an ancient Bronze Age city that was hidden beneath the water of a reservoir for ... END_OF_DOCUMENT_TOKEN_TO_BE_REPLACED

With his fist bump greeting for a man he previously called a pariah, US President Biden has paved the way for Saudi Crown Prince Mohammed bin Salman's return to the international ... END_OF_DOCUMENT_TOKEN_TO_BE_REPLACED
Author:
Sinan Antoon
Date:
Mail:
Send via mail

END_OF_DOCUMENT_TOKEN_TO_BE_REPLACED
Social media
and networks
Subscribe to our
newsletter