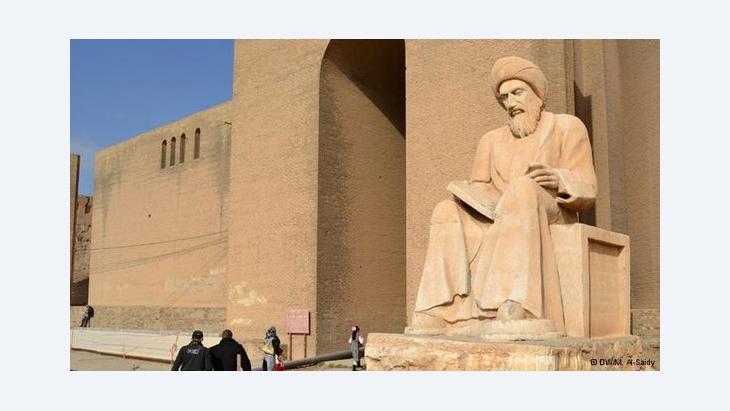 Education in an Age of Terror

﻿Once renowned throughout the Arab world for the importance it attached to good education, Iraq and its education system have suffered enormously since the overthrow of Saddam Hussein nine years ago. Many intellectuals fled abroad or into the provinces of Iraqi Kurdistan, triggering change in the education system there. Birgit Svensson reports from Baghdad

﻿According to an old Middle Eastern saying, books are written in Egypt, printed in Lebanon and read in Iraq. In the region, Iraqis have long been considered well-educated and interested in learning. Baghdad's Mutanabbi Street was once known throughout the entire Arab world. Eyes would light up in Cairo or Beirut when someone mentioned the street. Baghdad wasn't just the centre of trade and entertainment, but also of art and education.

Those in the know would head to Mutanabbi Street on Fridays and come home with a small mountain of used or new books. In the Schabander coffee house, artists, writers, filmmakers and intellectuals met and talked. The country's elite surrounded by books: that was the image of Iraq in the 70s and 80s.

"Education was highly valued," recalled Riadh Kaddou, who studied engineering and did an internship in London. Both his parents received their training in the US at a time when the government was generous, offering millions for scholarships abroad. The best students were allowed to go to the UK, Germany or the USA. Those with less impressive grades could study in the Soviet Union, Eastern Europe or Egypt. 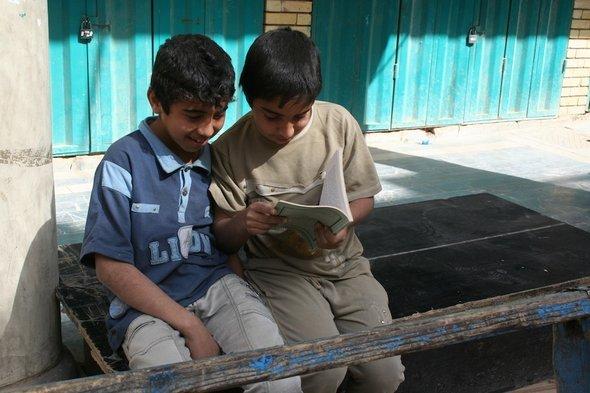 In the 80s and 90s, Mutanabbi Street in Baghdad was where the elite went to meet and talk. The street – renowned throughout the Arab world as an El Dorado for book-lovers – was destroyed in a bomb attack in 2007 in which almost 100 people were killed

When the students returned from abroad, jobs in management, state-funded housing and other privileges awaited them. "That's why everyone wanted to have a good education," said Kaddou of the hunger for learning at the time. "That's still there," said the 51-year-old of developments in recent years, "but today everything is different." At the time, an Iraqi dinar was worth three dollars. Today, a dollar is worth just under 1,200 dinars. The country has suffered an unprecedented decline in many respects.

No academic exchange in isolation

The destruction wrought by three wars affected lives well beyond the country's rulers and military, leaving its mark on minds too. The embargo following the Kuwait War in the 1990s divided Iraq. From that point on, the Kurdish provinces in the North developed differently from the rest of the country. A no-fly zone enforced by the UN offered the Kurds protection from further persecution by Saddam Hussein, but also blocked progress.

Academic exchange was practically impossible, and archaic family structures quickly penetrated academic life. When children were sent to school at all, it was generally the boys that got to go. Girls had to stay home or were taken out of school before completing their studies. Thousands of Kurds fled to other countries in order to escape the dictator's henchmen; thousands more fled the isolation. 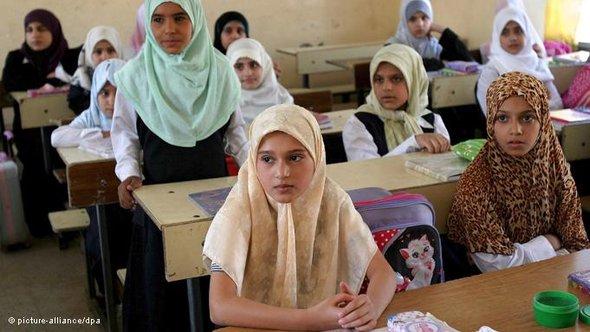 Although the UN-enforced no-fly zone protected the Kurds from Saddam Hussein, it also blocked progress in Iraqi Kurdistan: isolation from the rest of the country and the world meant that academic exchange was difficult. It also meant that traditional family structures once again took hold, either preventing girls from going to school or not allowing them to complete their schooling

The rest of Iraq was also isolated, albeit in a different way. Exchanges at both secondary and university level still took place, but the country became visibly poorer. School and university buildings decayed, and new technology was not installed either because the embargo made them impossible to obtain or because they were simply too expensive. When Saddam Hussein was overthrown in April 2003, the university equipment dated back to the late 1970s/early 1980s. Scholarships for studying abroad had been cut.

Attacks on the elite

The American and British invasion was followed by a terror that many school and university experts considered worse than anything that came before. Iraq had never before experienced a brain drain of the kind in the post-Saddam era. The academic elite were hunted; professors, teachers, doctors, lawyers and politicians were shot, kidnapped or threatened. When lecturers gave out bad grades on account of poor performance, they had to consider the possibility of being murdered by students.

One professor at Mustansiriya University never left home without a weapon. Incendiary devices were detonated outside university buildings. On 5 March 2007, two car bombs went off in Mutanabbi Street, destroying the entire street and killing nearly 100 people. For many, the attack signalled the end of the country's love affair with learning. Nearly a million people have left Baghdad in the last nine years, including many educated people. In the last two years, the number of attacks has dropped off significantly, but those who fled still see grounds for mistrust. Few of them have returned home since then. 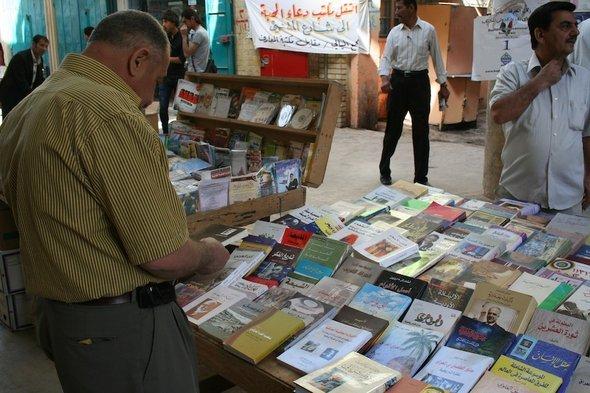 According to Birgit Svensson, the brain drain in Iraq in the post-Saddam era is the worst ever experienced in the country. People left not just because the education system was in decline, but also because the country's elite became the target of terror, threats, kidnapping and assault

Reforms in the Kurdish educational system

In Iraqi Kurdistan, a semi-autonomous region in northern Iraq, developments in recent years have taken a much different course. The region has been largely unaffected by terrorism, and teachers and professors from Baghdad have sought refuge in the three Kurdish provinces of Erbil, Dohuk and Sulaymaniyah, where many now work. The academic refugees can enjoy contact there with thousands of Kurds who have now returned home from exile, bringing with them their years of experience in Europe or the US.

One individual, who returned from Sweden three years ago and became education minister in the regional government, introduced the Swedish school system there. That marked the first step towards a thorough school reform process, says educator Mazim Rasul. "Now the pupils have to start preparing for their exams in the 10th and 11th grades rather than in the 12th grade like they used to," Rasul explained. The baccalaureat exams will also account for just two-thirds of the graduation requirements.

Another sign of the region's educational renewal comes by way of Rasul. The 40-year-old returned to Iraq from Nuremberg and helped found the first German school in his home country in the city of Erbil. The school has been up and running for two years.

But the region's public schools still employ traditional educational models, says Principal Jürgen Ender. "The teacher speaks while the students take notes and learn things by rote," he said. He would like to see instruction methods favoured in Sweden and in Europe take hold, such as using group work and letting students learn by way of giving presentations, but believes introducing such practices will take time.

Some of the students in Iraqi Kurdistan, however, see the changes very differently, taking to the streets to protest against the added pressure that the Swedish approach brings.

Birgit Svensson has lived and worked in Iraq since the US and British-led invasion in 2003. As a freelance reporter, she works primarily for German national newspapers and broadcasters.

The anti-Israeli Quds Day did not take place this year – a first both for Iran and Lebanon's Hezbollah. While Hezbollah leader Nasrallah sees his organisation in a state of siege ... END_OF_DOCUMENT_TOKEN_TO_BE_REPLACED

According to the latest Reuters tally, more than 2.54 million people are now reported to have been infected by the novel coronavirus globally and 177,004 have died. As Muslims ... END_OF_DOCUMENT_TOKEN_TO_BE_REPLACED

While some are beginning to protest the lockdown, others are unable to bury their loved ones in accordance with Islam. Here’s the latest from across the region END_OF_DOCUMENT_TOKEN_TO_BE_REPLACED

From advisories against travel to calls for a new jihad, Islamic State sees the COVID-19 pandemic as an opportunity to exploit. The militants, however, are no more immune to the ... END_OF_DOCUMENT_TOKEN_TO_BE_REPLACED

Coronavirus is also spreading in Iraq. This didn't stop hundreds of thousands of pilgrims travelling to a Shia shrine, however. The nation's health system has already conceded it ... END_OF_DOCUMENT_TOKEN_TO_BE_REPLACED

Coronavirus continues unabated. Iran remains a hub of infection, war-torn Syria has recorded its first case and Yemen is bracing itself for the worst. Here’s the latest from ... END_OF_DOCUMENT_TOKEN_TO_BE_REPLACED
Author:
Birgit Svensson
Date:
Mail:
Send via mail

END_OF_DOCUMENT_TOKEN_TO_BE_REPLACED
Social media
and networks
Subscribe to our
newsletter