A memorial was erected to Jewish martyrs of the Iran-Iraq war by President Rouhani, and for some years now, Jews have had the right to take the Sabbath (Saturday) off. “There have been a couple of occasions in the past when I have been looking for work and didn’t get the job after saying at the interview that I was Jewish,” Eliyan admits. It wasn’t because they didn’t want to hire a Jew, but rather because they knew they would be legally obliged to give me Saturday off if I wanted it.”

So, if a Jew in Iran does not get a job, it’s not because of their religion, it’s because the law is on their side and employers are obliged by law to give them an extra day free per week if they want it, she explains. “There is no anti-Semitism in Iran. Iran is a multi-ethnic and very diverse country and Iranians are proud of that diversity and history.”.

As the eldest daughter, the pressure is now on her to start thinking about a future marriage partner. “My father is always trying to find potential candidates from families we know, but I turn them all down. They are all well off, but either too fat, too old, or both.” Eliyan’s dilemma is compounded by the fact that, as eldest daughter, she must marry first; only then will her two sisters Nazanin and Yasaman be allowed to date men. 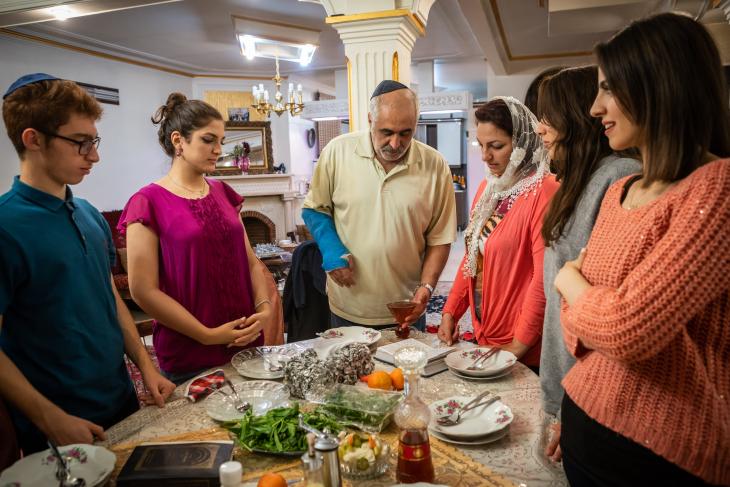 The Musazadehs generally celebrate Sabbath at home on Friday evenings. Although it is only a few streets away, the family rarely goes to their local synagogue. Three of Eliyan’s cousins, Rafael, Ariel and Avraham have arrived for today’s Sabbath celebrations

Friday evening Sabbath celebrations are usually at home. Although it is only a few streets away, the Musazadeh family rarely goes to the local synagogue. Three of Eliyan’s cousins, Rafael, Ariel and Avraham have arrived for today’s Sabbath celebrations. Mother Anita has been busy preparing and cooking the food all afternoon because any form of work, or use of fire or electricity, is forbidden during the Sabbath.

Despite that, Anita will cook the rice in the evening. “I can’t serve cold rice for dinner,” she says – a sentiment that no Iranian would argue with. The only family member who is regularly allowed to ignore religious laws is the father, Shahrokh, who runs a small business selling women's shoes and bags. He spends Sabbath evenings on the couch, zapping his way through the Iranian satellite TV channels, while mother Anita is kept busy between the kitchen, her three daughters, youngest son Ariyan and the family dog, as well as seeing to the food.

Once again there was not much to vote for in the Islamic Republic. Half of the candidates were excluded anyway. But for Khamenei, the election was part of a larger plan, namely ... END_OF_DOCUMENT_TOKEN_TO_BE_REPLACED

In the run-up to Iran’s parliamentary elections on 21 February, state media was at full blast. Urging Iranians to take to the polls, state TV’s Channel 1 ran an election-day ... END_OF_DOCUMENT_TOKEN_TO_BE_REPLACED

The 2015 Joint Comprehensive Plan of Action with Iran is in jeopardy. European governments should use the JCPOA’s dispute-resolution mechanism both to pursue immediate measures to ... END_OF_DOCUMENT_TOKEN_TO_BE_REPLACED

Mullahs, dictatorship, nuclear conflict – Iran could be reduced to these keywords if one were to rely only on the articles in the daily press. But to really understand a country ... END_OF_DOCUMENT_TOKEN_TO_BE_REPLACED

Many predominantly Muslim countries have penal laws against "blasphemy", "defamation of religion" and "apostasy". In practice they serve as highly effective weapons to settle ... END_OF_DOCUMENT_TOKEN_TO_BE_REPLACED

END_OF_DOCUMENT_TOKEN_TO_BE_REPLACED
Social media
and networks
Subscribe to our
newsletter