It is at times like this that it becomes clear why the Iranian Jews are Iranians first and Jews second. Like most Iranians, the Musazadehs have an almost unconditional love for their country. Like other Iranians too, however, they also find the economic situation hard to bear. “I would like to go abroad, to Europe maybe, or Canada,” says Eliyan. “You cannot find any well-paid jobs in Iran anymore, and the situation is getting worse every year.”

No future in Iran

It is a view shared by many young people in Iran. Many no longer see a future for themselves in the country and are keen to go abroad, at least temporarily, for work or study. “Neither America nor Israel would be an option for me. A relative of ours once went to the U.S. and she hated it. She didn’t take to the culture or the fast pace of life at all.”

One of Eliyan’s aunts, who died last year, also visited Israel for medical treatment. “As Jews we have the opportunity of emigrating to Israel, and even receiving around 15,000 dollars from the Israeli government for going. But if we went there, we would have to speak Hebrew, something we only ever do in religious contexts. That would be very strange for us and I would not feel at home there. Iran is our home.” 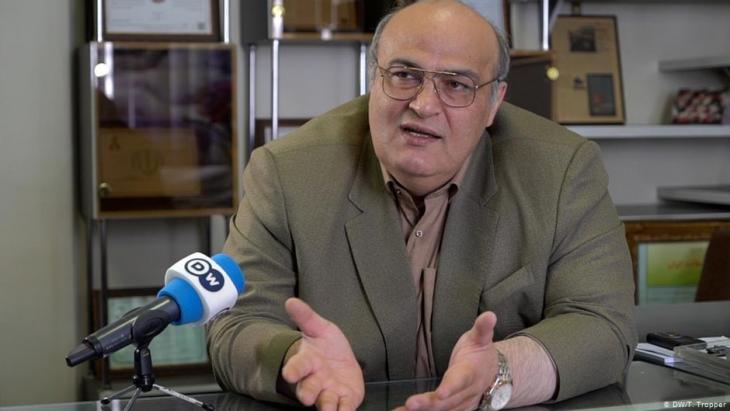 As the food is brought to the table, father Shahrokh brings out another bottle of homemade wine. Everyone takes up a glass while Ariyan, the youngest son, reads a prayer. The meal consists of salad with pomegranate seeds, the obligatory Sabbath fish, Iranian Barbari bread, and Gondi (chicken and chick-pea dumplings) a dish that is particular to the Iranian Jewish cuisine.

Despite the positive circumstances for Jews in Iran, tens of thousands of them seized the welcome opportunity provided by the 1979 revolution to turn their backs on their homeland forever. Eli Hoorizadeh, an uncle of the Musazadeh family, seeing little prospect in Iran of realising his ambition of becoming a rabbi, left the country in 1980, shortly after the revolution. Today he lives in Jerusalem with his wife and 13 children. “He is happy to have left Iran and has no interest in coming back. Israel has become the home for him that Iran could never have been,” says Eliyan.

As the long evening draws to a close, and another pot of tea brews in the kitchen, the family sit together in the living room engrossed in the Iranian version of “Who Wants to Be a Millionaire?”.

The idea, propagated by the West, that Iranian Jews are suffering under the country’s government is something Eliyan has little patience with. When asked about her hopes for the future, she answers: “If I as a Jew could request anything of the Iranian government, I would ask for some nice, handsome Jewish boys, so I could finally find someone to marry.”

In the run-up to Iran’s parliamentary elections on 21 February, state media was at full blast. Urging Iranians to take to the polls, state TV’s Channel 1 ran an election-day ... END_OF_DOCUMENT_TOKEN_TO_BE_REPLACED

The 2015 Joint Comprehensive Plan of Action with Iran is in jeopardy. European governments should use the JCPOA’s dispute-resolution mechanism both to pursue immediate measures to ... END_OF_DOCUMENT_TOKEN_TO_BE_REPLACED

Mullahs, dictatorship, nuclear conflict – Iran could be reduced to these keywords if one were to rely only on the articles in the daily press. But to really understand a country ... END_OF_DOCUMENT_TOKEN_TO_BE_REPLACED

Many predominantly Muslim countries have penal laws against "blasphemy", "defamation of religion" and "apostasy". In practice they serve as highly effective weapons to settle ... END_OF_DOCUMENT_TOKEN_TO_BE_REPLACED

Iranian-German artist Parastou Forouhar, resident in Germany since the 1990s, is known for her idiosyncratic drawings, photographs, installations and animations. ... END_OF_DOCUMENT_TOKEN_TO_BE_REPLACED

These days you might be forgiven for wondering whether international relations would be better served by artists than politicians. Iranian Kayhan Kalhor, a bridge builder from the ... END_OF_DOCUMENT_TOKEN_TO_BE_REPLACED
Author:
Jan Schneider
Date:
Mail:
Send via mail

END_OF_DOCUMENT_TOKEN_TO_BE_REPLACED
Social media
and networks
Subscribe to our
newsletter