The Islamic Republicʹs existential crisis
Will Iran crack under the strain?

Iranʹs 2017–18 popular uprising heralded a new chapter in the history of the Islamic Republic that, in its fortieth year, is mired in acute and seemingly insurmountable domestic and foreign policy challenges, writes Ali Fathollah-Nejad. Seemingly, there is no end in sight

The Islamic Republic is facing three crises – political, socioeconomic, and ecological – each dramatic in its own right. Politically, the state, characterised by the superiority of theocratic over semi-republican institutions, has shown itself immune to meaningful reform.

The protests that shook the country between late December 2017 and early January 2018, meanwhile, showed the rejection of the Islamic Republicʹs factionalism, which had hitherto offered the Iranian people a choice between the lesser evil (usually, a moderate establishment figure) and the larger evil (usually, the hard-liners) at presidential elections.

Socioeconomically, the country faces similar troubles to other nations in the Middle East region affected by the Arab Spring. These include high unemployment, especially among the youth and women.

A new class, termed the "middle-class poor", has emerged as a result of the neo-liberal shift in economic policies since the 1990s. They formed the social base of the protests, defined as those with middle-class qualifications and aspirations who now find themselves in a socioeconomically precarious position.

Ecologically, desertification and water shortages have already started to undermine the livelihoods of tens of millions, leading to uncompromising anger against authoritiesʹ mismanagement and neglect, and state repression. If the environmental crises are not solved, in a decadeʹs time, half of Iranʹs provinces are likely to become uninhabitable.

Moreover, in three decadesʹ time, the entire country may turn into a desert. The recent catastrophic floods that began in mid-March and lasted until April 2019 in over two-thirds of the countryʹs provinces are a case in point. 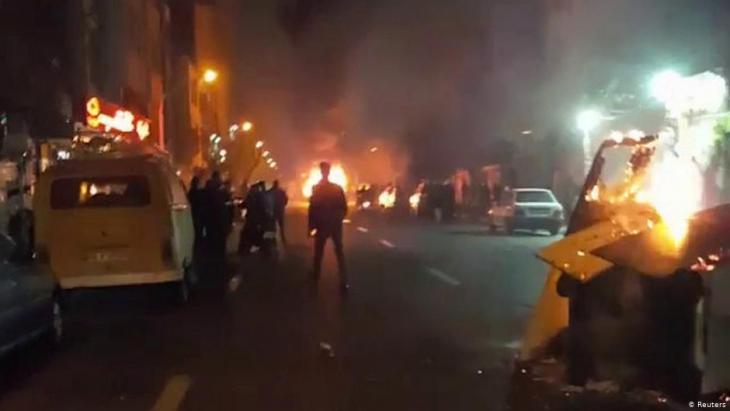 The most radical protests since the inception of the Islamic Republic: the popular unrest in late December 2017 and early January 2018 had an unprecedented geographical spread and was driven by the lower classes – conventionally considered part of the regimeʹs social base. After ten days it was all over, due to repression by security forces and the absence of important middle-class participation. However, the short-lived revolt sent shockwaves across the countryʹs establishment about the sheer depth of peopleʹs dissatisfaction. Moreover sporadic demonstrations by various groups, including women and labourers, have continued ever since

More devastating than the notorious earthquakes plaguing the country, the reasons for the floods – which caused massive devastation estimated at around $3 billion – were primarily man-made and a result of mismanagement.

As a result, immense anger was directed at the authoritiesʹ shortcomings and negligence. Ironically, environmental activists have to date been viewed as a national security threat as their work uncovers the complicity of the rulers in the ecological catastrophe.

Faced with internal dissent since its inception, the Islamic Republic has learned to master the art of using and abusing foreign crises to consolidate power at home. The longevity of the Islamic Republic can be traced back to a combination of internal and external factors, which are at times interrelated.

Since the 1979 revolution that brought them to power, Iranʹs rulers have wilfully mastered the art of employing external crises to create a rally-round-the-flag effect at home, based on a narrative in which Iran is the innocent victim of unjustified and abusive imperialist powers – which may at times have had a kernel of truth.

The regime has used this technique to disavow and crack down on internal dissenters, portraying them as stooges of malign outside forces. Next to the anti-imperial zeitgeist that generated the revolution, it has been nationalistic sentiments that the Islamist rulers have generally tried to exploit.

Home
Print
Newsletter
More on this topic
U.S. policy on Iran: Trump's fake "stability" premiseInterview with Middle East expert Volker Perthes: "Iran will not negotiate its own surrender"Protests in Iran: The spark that turned into a wildfireProtests in Iran: No revolution in sight
Related Topics
Ayatollah Ali Khamenei, Hassan Rouhani, Iran conflict, Iranian nuclear programme, Iranian opposition, Islam and the West, Islamic Revolution of Iran, U.S. policy in the Middle East
All Topics

Iranian author Fariba Vafi is adept at describing everyday scenes and concealing within them something ambiguous, in parts strange and grotesque. She writes novels – which have ... END_OF_DOCUMENT_TOKEN_TO_BE_REPLACED

In her latest exhibition in Japan, Farzaneh Khademian depicts figures who seem detached from their surroundings. In interview with Qantara.de, the Iranian photographer and painter ... END_OF_DOCUMENT_TOKEN_TO_BE_REPLACED

The catastrophic human rights situation in Bahrain is being largely ignored by the rest of the world. Despite all the damning evidence, which includes a Human Rights Watch report ... END_OF_DOCUMENT_TOKEN_TO_BE_REPLACED

Talks to salvage the 2015 Iranian nuclear deal have entered their eighth round in Vienna. Even if a deal is struck and some of the sanctions are lifted, the state of the Iranian ... END_OF_DOCUMENT_TOKEN_TO_BE_REPLACED

Every year in December, the team at Qantara.de takes a look back at the articles that proved most popular with our readers. This year is no different. Here is a run-down of the ... END_OF_DOCUMENT_TOKEN_TO_BE_REPLACED

END_OF_DOCUMENT_TOKEN_TO_BE_REPLACED
Social media
and networks
Subscribe to our
newsletter