What is more, a political and economic oligarchy has limited spaces for other sectors of society to meaningfully challenge the status quo, while the political systemʹs sophisticated authoritarianism has blocked the way for serious reform. The regime has not shied away from the crises that created it in the first place, such as the 444-day-long occupation of the U.S. Embassy within the first year of the revolution.

To consolidate its power against rivals, Ayatollah Khomeini chose not to seize the opportunity to end the devastating war with Iraq in 1982. Add to that the permanent rhetorical attacks against the "Great Satan" (the United States) and the "Little Satan" (Israel), which has sustained the bitter antagonism with those states.

However, today the effectiveness of such rhetoric has lost much appeal among ordinary Iranians who have – almost on a daily basis for four decades – heard these narratives of blaming outsiders for internal problems.

The 2017/2018 uprising turned much of the regimeʹs rhetoric about outsiders on its head in one famed chant heard across the country: "Dushman-e ma haminjast, hamash migan Amrikast" (lit. our enemy is right at home; they always say itʹs America).

On the external front, Iran still suffers from "strategic loneliness", which dates back to the Islamist takeover in 1979 and which is both externally and self-imposed.

On the one hand, Iranʹs post-revolutionary foreign policy has alienated many of its neighbours, fearful of its "export of the revolution" doctrine, while its independent character has placed it at odds with the United States – a superpower largely intolerant of independent actors in strategically vital world regions. 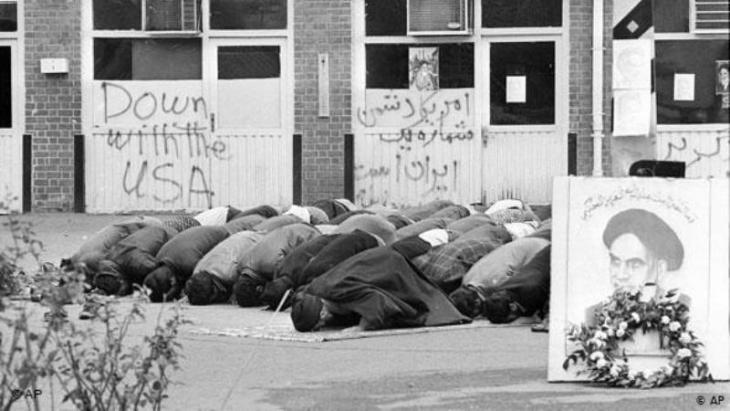 No longer a convincing argument: these days the effectiveness of ʹrally round the flagʹ rhetoric has lost much of its appeal among ordinary Iranians. The 2017/2018 uprising turned the regimeʹs rhetoric about outsiders on its head in one famed chant heard across the country: "Dushman-e ma haminjast, hamash migan Amrikast – Our enemy is right at home; they always say itʹs America"

On the other, its isolation is self-imposed, given the Islamic Republicʹs uncompromising revolutionary rhetoric directed against "the West" and some neighbouring states. As stated above, such enmity has been routinely evoked in an effort to consolidate power domestically.

This perennial hostility toward the international systemʹs most powerful state has overshadowed, and will continue to do so, Iranʹs relations with other powers such as Europe, its pro-Western neighbours in the Middle East, and non-Western great powers (Russia, China, and India) whose relations with Washington supersede those with Tehran.

This situation has sustained a massive conventional military asymmetry to the detriment of Iran, which has been deprived of purchasing Western high-tech weaponry as a result of U.S.-led sanctions.

Surrounded by adversarial countries with U.S. military bases, as well as Israel and the Gulf Cooperation Councilʹs huge arsenals, the Islamic Republic has relied on means of deterrence that include asymmetric warfare, a regional network of mostly non-state actors, and its ballistic missile programme.

Home
Print
Newsletter
More on this topic
U.S. policy on Iran: Trump's fake "stability" premiseInterview with Middle East expert Volker Perthes: "Iran will not negotiate its own surrender"Protests in Iran: The spark that turned into a wildfireProtests in Iran: No revolution in sight
Related Topics
Ayatollah Ali Khamenei, Hassan Rouhani, Iran conflict, Iranian nuclear programme, Iranian opposition, Islam and the West, Islamic Revolution of Iran, U.S. policy in the Middle East
All Topics

Drought and upstream water diversions have seen the Zayandeh Rood, "fertile river" in Persian, run dry since 2000, with only rare exceptions. The famed river bridges of the ... END_OF_DOCUMENT_TOKEN_TO_BE_REPLACED

Very different Western reactions to the suffering in Ukraine and the Arab world show that there is a profound rift among cultures. Essay by Michael Young END_OF_DOCUMENT_TOKEN_TO_BE_REPLACED

Since the government cut subsidies for food, prices in Iran have skyrocketed. Protests that broke out in Khuzestan province are now spreading across the Islamic Republic. By ... END_OF_DOCUMENT_TOKEN_TO_BE_REPLACED

United Arab Emirates strongman Sheikh Mohammed bin Zayed al-Nahyan, who was formally elected president on 14 May, has led a realignment of the Middle East, creating a new anti- ... END_OF_DOCUMENT_TOKEN_TO_BE_REPLACED

More than 800 Iranian filmmakers have signed a declaration against sexual harassment, coercion and violence in their industry. The public's response to their willingness to name ... END_OF_DOCUMENT_TOKEN_TO_BE_REPLACED
Author:
Ali Fathollah-Nejad
Date:
Mail:
Send via mail

END_OF_DOCUMENT_TOKEN_TO_BE_REPLACED
Social media
and networks
Subscribe to our
newsletter