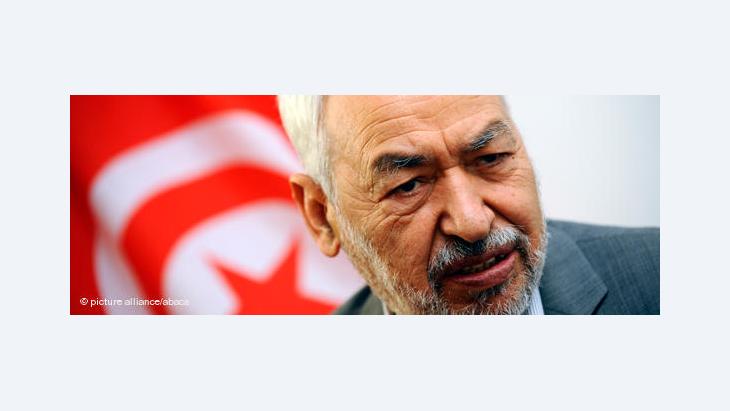 ﻿Tunisia's Islamist Renaissance Party is now the strongest force in the constituent assembly. Many have been surprised by the fact that no secular party was able to garner nearly as many seats, and "Ennahda's" victory has alarmed those who espouse a liberal Tunisia. An analysis by Sigrid Faath

Nine months after the resignation of the president on 14 January 2011, the first truly free elections were held in Tunisia since independence in 1956.

Victory for the Islamists

The results were announced by Tunisia's electoral commission on 27 October. According to these, of the 7.5 million people entitled to vote, 3.7 million or 46.5 percent cast a ballot. Of the 217 seats on the constituent assembly, the Islamist party "Ennahda" won 90 seats (41.47 percent), making it the outright winner. 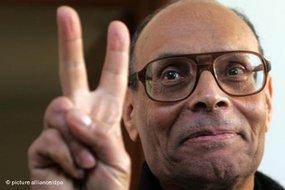 Optimistic and confident: The centre-left "Congress for the Republic" (CPR) led by professor of medicine Moncef Marzouki, won 30 seats giving it the second-largest share in the assembly

​​The second-largest party with 30 seats (13.82 percent) was the "Congress for the Republic" (CPR) led by Moncef Marzouki, aligned to the centre-left on the Tunisian political party spectrum and presenting Arab-nationalist ideas.

The third largest party with 21 seats (9.86 percent) was the social-democratic party "Ettakatol" (Democratic Forum for Labour and Liberties) led by Mustapha Ben Jafaar.

One surprise result was the 19 seats (8.79 percent) for the "Al-Arhidha" party (Popular Petition) led by the businessman and exiled opposition activist Hachemi Hamdi, who then boycotted those seats in the constituent assembly as a protest after the electoral commission disqualified several lists due to financial irregularities.

The secular-liberal "Progressive Democratic Party" (PDP), whose leaders Maya Jribi and Néjib Chebbi conducted a large-scale election campaign and ruled out any coalition with Islamists in advance of the poll, performed unexpectedly badly and could only capture 17 seats (7.83 percent). The remaining seats were shared between all other parties and independent candidates.

In any event, 49 seats (24 percent) on the constituent assembly went to women, 42 of those to female representatives of "Ennahda".

European Union observers monitoring the electoral process since 8 September 2011 gave the poll a clean bill of health despite isolated irregularities, and gave positive feedback on the neutrality of audiovisual media.

Tunisian observers had predicted a good result for "Ennahda", following the legalization of the party and the return of its president Rachid Ghannouchi from his exile in London. They had forecast that the Islamists would capture between 20 and 30 percent of the vote.

Like the CPR and "Ettakatol", "Ennahda" cashed in on its reputation as long-term opponent of the old regime. The fact that Rachid Ghannouchi and the CPR President Marzouki had lived in exile, and were not directly involved in the domestic policy developments of recent years worked in their favour, allowing both men to portray themselves as a credible alternative to the old corrupt regime. 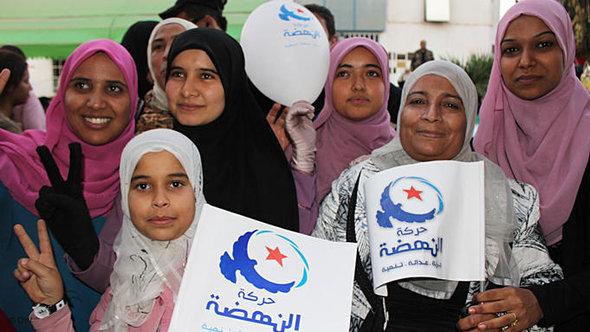 Burgeoning popularity within the civil population after decades of political repression: The "Ennahda" or "Renaissance Party", founded in the 1970s, suffered brutal oppression at the hands of the nation's first President Habib Bourguiba. It received the same treatment from his successor Ben Ali, who incarcerated thousands of activists

​​In addition, both men were frequent guests on political chat shows on the popular Qatari television channel Al-Jazeera, where they criticized the Ben Ali regime and maintained close media contact with the Tunisian population.

The fact that "Ennahda" emerged as the strongest power in the constituent assembly was also undoubtedly due to those who did not vote. It can be assumed that "Ennahda" largely exhausted its potential; while the non-voters probably included numerous former members or supporters of the ex-government RCD party, which was banned earlier in the year – voters who are more likely to be in favour of a secular order.

The results of the elections, which were welcomed by Islamists of all shades in Tunisia, have provided all Islamist groups with a fresh boost. This is evident among other places at universities, where militant Islamists are especially active and looking to impose their dress regulations.

Both teaching staff and students fear that the outcome of the poll could now also lead to censorship. Women's associations active for years in the promotion of equality – also with respect to the law of inheritance –, liberals and left-wingers are not convinced "Ennahda" will pursue the "moderate" path officially proclaimed by its leaders and leave women's rights in Tunisia untouched. Some Tunisians are now even wondering whether or not artists should be worried by the "Ennahda" victory.

Tunisia's Jewish community, which numbers between 1,500 and 2,000, has greeted the election victory with consternation and expressed the hope that the majority of Tunisians will not allow a new dictatorship to take hold. Several Jews admit they have already made provisions to leave the country.

Other election commentators pour water on the flames by saying there is no reason to fear "Ennahda", which is forced to make compromises because it does not have an absolute majority in the constituent assembly, and because control mechanisms have been integrated into the new political system to prevent the development of authoritarian-monopolistic tendencies.

Any departures from the path of the "Freedom Revolution" that was initiated with the ousting of the Ben Ali regime would trigger a new revolution, they claim.

Official statements from Europe, China, Russia and the US largely praised the smooth progression of the poll. Special congratulations for "Ennahda" came from Islamist organisations in neighbouring countries, as well as from Iran. The Libyan Transitional Council, which also wants to bolster Islamist references and traditions in post-Gaddafi Libya, also reacted positively to the result. 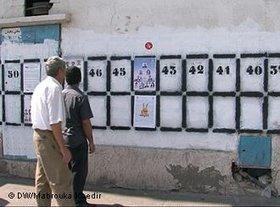 Tunisians spoiled for choice: More than 11,000 candidates on around 1,500 lists stood for the 217 seats in the assembly

​​The Algerian leadership on the other hand monitors the growing strength of Islamist movements in Tunisia, Libya and Egypt with evident concern, particularly as militant groups are also active in Tunisia and within "Ennahda" itself, various factions with differing ideas on the future political and social order of Tunisia grapple for influence.

As the Islamists find their feet and establish themselves, these internal party conflicts remain in the background. "Ennahda's" public presence is dominated by a moderate discourse with copious references to the Turkish AKP as a model. Clearly, party leader Rachid Ghannouchi is doing all he can to calm public nerves , both at home and abroad.

He received support to this end from the EU's Special Representative for the Southern Mediterranean Region, Bernardino Leon, who said that Tunisian Islamism was similar to Turkey's brand of moderate Islamism, and that there was no need to fear an Islamic election victory in Tunisia – after all, "Ennahda" representatives had stressed their readiness to cooperate with the EU.

But any such cooperation should however not be at the expense of campaigns to promote equality, minority rights and individual liberties, all of which have received staunch backing from Europe to date and support through numerous projects.

In an interview, the President of the "International Federation for Human Rights", Souhayr Belhassen, herself a Tunisian national, outlined what is in her view a very real threat that in the medium term, "Ennahda" plans to realise a programme of re-Islamisation in accordance with its underlying doctrinaire agenda, which diverges from the implementation of universal human rights.

In Europe, the characterisation of "Ennahda" as a moderate party appears to arise from calculated optimism. But to date, this supposition has not been backed up by hard facts. At the moment, "Ennahda's" public face is dominated by general announcements and relatively vague policy stance declarations. In this spirit, the willingness to form a national unity government with the CPR and "Ettakatol", possibly under the chairmanship of "Ennahda" politician Jebali, is also under discussion.

Over the course of the coming year, when the formation of the government is complete and all institutions have begun their work, "Ennahda's" true political nature will reveal itself.

Only then will we see just how tolerant the party is, to what extent it is willing to compromise, what role it assigns to religion in the constitution and in society in general, which laws and sectors – apart from the education sector – it would like to see infused to a greater extent by religious values, and how it manages its relationship with militant Salafist groups.

It is still too early to predict whether and how liberal and secular Tunisian citizens will regroup and actively mobilise themselves following the initial shock of this election result.

It is equally uncertain whether the second and third largest parties in the constituent assembly – the CPR and "Ettakatol" – will remain true to their pledge not use religion as an instrument in the pursuit of political goals, and to defend individual liberties, labour laws and ongoing moves to attain complete equality between the sexes.

The political scientist Dr. Sigrid Faath is Associate Fellow at the German Council on Foreign Relations in Berlin. Her specialist areas include the domestic and foreign policies of the Maghreb states, as well as the Euro-Mediterranean Partnership.

Healthcare systems in Tunisia and Egypt are in a catastrophic state. The governmental response to the crisis in both nations could not be more different. Sofian Philip Naceur ... END_OF_DOCUMENT_TOKEN_TO_BE_REPLACED

As COVID-19 sweeps across the globe, it is forcing religions to adapt and take action to prevent infection. But experts warn against using the crisis to fuel conspiracy theories. ... END_OF_DOCUMENT_TOKEN_TO_BE_REPLACED

As the global economy reels and everyday life grinds to a standstill, we take a look at the spread of coronavirus across the Middle East and the wider Muslim world – and the ... END_OF_DOCUMENT_TOKEN_TO_BE_REPLACED

Since the 2011 uprisings, authoritarian rulers in the Arab world have worked out how to manipulate and instrumentalise the media to their own ends, nipping any new democratic ... END_OF_DOCUMENT_TOKEN_TO_BE_REPLACED

Decades after the first French nuclear test in Algeria, thousands of victims are still waiting for compensation. To date only 51 claims have been filed under French legislation ... END_OF_DOCUMENT_TOKEN_TO_BE_REPLACED

Many predominantly Muslim countries have penal laws against "blasphemy", "defamation of religion" and "apostasy". In practice they serve as highly effective weapons to settle ... END_OF_DOCUMENT_TOKEN_TO_BE_REPLACED
Author:
Sigrid Faath
Date:
Mail:
Send via mail

END_OF_DOCUMENT_TOKEN_TO_BE_REPLACED
Social media
and networks
Subscribe to our
newsletter