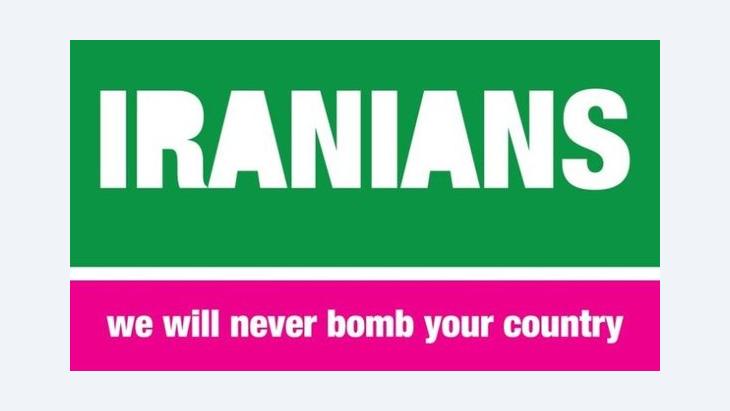 As political leaders from Iran, Israel and the United States continue to talk about "military solutions", Ronny Edri, an Israeli graphic designer started the "Israel loves Iran" campaign to try to shift leaders' rhetoric away from war. Iranian journalist Sahar Namazikhah reflects on what the campaign means to her

Iranians and Israelis should mark 14 March 2012 on their calendars – it is the day that the "Israel loves Iran" campaign began to unify the voices of Israelis and Iranians through the path of peace, despite the messages of war that political leaders have conveyed. 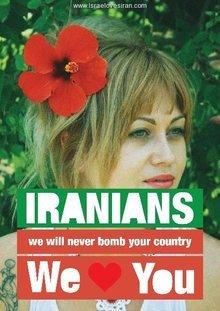 Reframing the narrative of war to one of a "love bomb": Poster of the "Israel loves Iran" campaign

​​Since last week, inspired by Israeli graphic designer and teacher Ronny Edri's "Israel loves Iran" campaign, Iranians as well as members of other nations have reframed the narrative of war to one of a "love bomb".

Edri designed posters that read "Iranians: We will never bomb your country. We ♥ you." And Iranians responded in kind. This messaging is changing nightmares of war into hope that there will be solidarity between the people of Iran and Israel – creating a movement to wipe out fear, instead of each other.

The power of compassion

The unique characteristic of this campaign is how ordinary people have succeeded in reframing government narratives. Under pressure from fear of a war – initiated by governments – people began efforts to rescue each other from fright and apprehensiveness; they sought to make each other feel secure.

When a popular movement of solidarity and unity like this is launched, it makes it clear that governments do not have their people's support in threatening the other side with war. Remarkably, the movement is succeeding in raising public consciousness and global awareness that people in both countries hate war – not each other.

As an Iranian observing this popular solidarity, I feel pride that people who have been surrounded by the nightmare of war for decades now find themselves powerful enough to change the future of the two countries as they stand shoulder-to-shoulder with friends and allies in the campaign.

Messaging campaign from our global society

If you spend even a few minutes on social networking sites, you will see that not only are Israelis and Iranians powering the campaign, but citizens of other nations, from Italy to the Philippines, are participating and want to counteract an attempt by Israel to strike Iran. This has truly become a messaging campaign from our global society.

It has grown to include a Facebook forum for individuals to connect. There, people from multiple countries have shared ideas, and the hunger for connecting across divisions and overcoming fears is clear. "Friends of Israel, we love you…before, there was no place to say [this]", said one Iranian participant. "I hope the soldiers of this earth can see what's happening here, between all [these] people…I hope they can say okay, let's stop the war", wrote another participant. 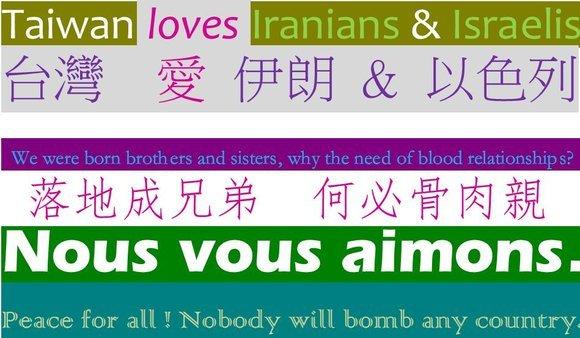 Bridging the people of Iran and Israel is not just preventing war, but re-bridging thousands of years of common history between the Iranian and Jewish peoples, writes Sahar Namazikhah

​​The "Israel loves Iran" campaign will be more powerful and effective when it builds bridges to more Iranians inside Iran. Bridging the people of Iran and Israel is not just preventing war, but re-bridging thousands of years of common history between the Iranian and Jewish peoples, dating back to the sixth century BCE.

This is the period when the Persian king Cyrus shaped the foundations of modern Iran through his achievements in politics and the military. He is described by Jewish sources, such as the ancient historian Josephus, as the "anointed of the Lord" because of his efforts to promote religious freedom and help the Jewish people return to their homeland.

The people of Israel and Iran can build this trust and respect again –this campaign is a step in that direction.

Sahar Namazikhah was a journalist in Iran for 15 years. She is Director of Iran Projects at the Center for World Religions, Diplomacy and Conflict Resolution, and a Ph.D. student at the School of Conflict Analysis and Resolution at George Mason University.

When is it and when is it not acceptable to display a political banner at the World Cup in Qatar? The answer seems to depend largely on the political message, with fans ... END_OF_DOCUMENT_TOKEN_TO_BE_REPLACED

The Kurds are under attack from two sides: from Turkey, and from Iran. The situation in their territories in northern Iraq is becoming increasingly desperate. Birgit Svensson ... END_OF_DOCUMENT_TOKEN_TO_BE_REPLACED

Iranians do not want an Islam that interferes. They are fed up with a system that manipulates people with simple promises of salvation and anti-Western propaganda. Islamic ... END_OF_DOCUMENT_TOKEN_TO_BE_REPLACED

"The Voice of Dust and Ash" draws us into the life and times of Iranian maestro Mohammad Reza Shajarian with passion and joy, focusing on the man who stood, and still stands, for ... END_OF_DOCUMENT_TOKEN_TO_BE_REPLACED

November 2022 sees the Arab world firmly in the spotlight with the COP27 in Egypt and the FIFA World Cup in Qatar. Public trust in MENA governments is weak, thanks to their ... END_OF_DOCUMENT_TOKEN_TO_BE_REPLACED

In Iran, two famous actresses, Hengameh Ghaziani and Katayoun Riahi, were arrested recently. These days anyone who shows solidarity with the protesters is a target to be silenced ... END_OF_DOCUMENT_TOKEN_TO_BE_REPLACED
Author:
Sahar Namazikhah
Date:
Mail:
Send via mail

END_OF_DOCUMENT_TOKEN_TO_BE_REPLACED
Social media
and networks
Subscribe to our
newsletter