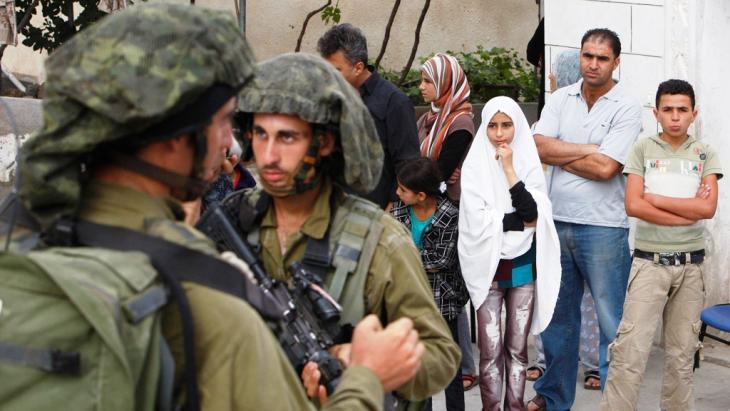 The Israeli army in the West Bank

The punishment of Palestinian citizens

Israel's heavy-handed acts of retaliation against both Hamas and Palestinian civilians are threatening to provoke a new escalation of violence. The Israeli military deployment in the West Bank is the biggest since the end of the second Intifada in 2005. A commentary by René Wildangel

On 12 June 2014, three Israeli youths are presumed to have been abducted close to the Gush Etzion settlement. This is just a suspicion, because no one has so far claimed responsibility, and the background details of the disappearances are unclear. If the youths really were abducted, then this should be roundly condemned; violence and terrorism are inappropriate vehicles for the attainment of political goals.

Although the Israeli Prime Minister has blamed Hamas, so far no evidence has emerged to support this accusation. What began as an Israeli army search operation for the three youths has now become a large-scale military deployment in the West Bank reminiscent of the days of the second Intifada.

These military operations are having a shocking impact on the Palestinian civilian population. The Israeli army says that at least 361 people have already been arrested, including many members of Hamas and more than 50 former detainees who were set free in 2011 as part of the exchange of prisoners for the Israeli soldier Gilad Shalit.

The Israeli cabinet has tightened up the conditions of detention for Hamas members in Israeli jails. Over a thousand private homes have been searched, with the Israeli army entering many households during the night. The army is even stepping up its presence in areas that have been under Palestinian Authority control since the Oslo accords. 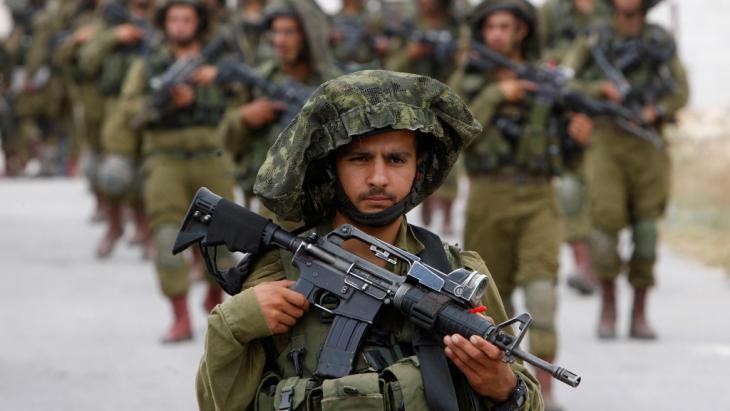 Collision course: the case of the three missing Israeli youths, who are assumed to have been abducted, has created new tension between Israel and the Palestinians. In conjunction with its search for the three youths, the Israeli army has detained 361 people. Five Palestinians, including young people, have been killed in army operations and in the subsequent protests

There have been advances and arrests leading to riots and protests in Ramallah, where the Palestinian Authority is based, and at the largest Palestinian university in Birzeit. The army has also carried out searches at the offices of local and international NGOs (e.g. the local office of the internationally operative aid organisation Islamic Relief) and media (in addition to Palestinian media organisations, the office of the English-language monthly magazine "This week in Palestine" and the Russian-language "Russia Today"), in some cases ransacking the offices and leaving them in a dreadful state. Large cities such as Hebron and Nablus have been sealed off. Meanwhile, five Palestinians – including youngsters – have been killed in these army operations and in the riots that have broken out in response; another Palestinian died of a heart attack when soldiers forced their way into his home.

The Israeli government is currently moving to whip up public opinion against "terrorists", by which it means not only armed fighters, but also all of Hamas and its political representatives and sympathisers. This opens the door to arbitrary detentions such as the re-arrest of the speaker of the Palestinian Legislative Council, Aziz Dweik, and other members of parliament.

Human rights and the presumption of innocence must also be applied to members of Hamas, even though the movement was in the past responsible for serious human rights violations.

The Israeli government is justifying its actions by referring to them as counter terrorism measures. A Facebook page in Hebrew with the cynical title "Until the youths come back, we'll shoot one terrorist every hour" shows that these actions are supported by some sections of the Israeli populace; the page has already garnered 20,000 likes. By contrast, 250 concerned Israelis in Tel Aviv have been protesting against the army's activities in the West Bank.

The political leadership of Hamas denies any responsibility for the abduction. The party only recently reached agreement with Fatah over the formation of a unity government, as a way of ending the Gaza Strip's isolation, which has been effective since 2007. The new government has also accepted the conditions of the Middle East Quartet, among them a renunciation of violence. For this reason, a planned abduction would have mean a calculated end to the unity government, and that could hardly be in the interests of the Hamas leadership at the present time.

It cannot be ruled out that an abduction has been carried out by lone operators, whether members of Hamas or not, possibly with the aim of securing the release of Palestinian detainees in Israeli jails. However, 10 days after the disappearances, no such demands have been issued. There are currently some 5,000 Palestinian prisoners in Israeli detention. For several weeks now, over 120 of them have been on hunger strike in protest at the practice of "administrative detention" employed by Israel to detain political prisoners without charge or trial, in some cases for years. 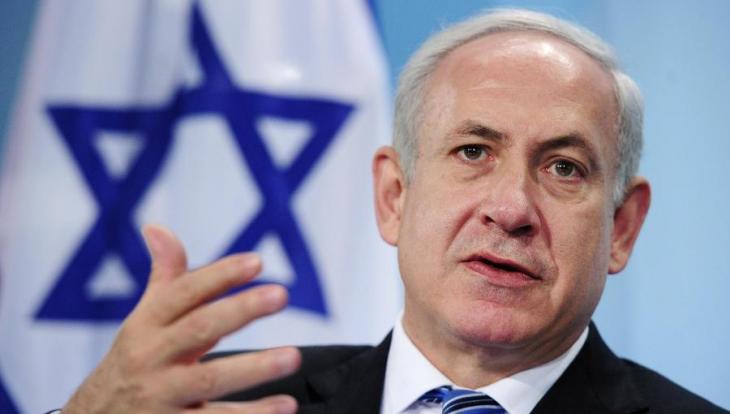 Method in the madness? According to René Wildangel, director of the Heinrich Böll Foundation in Ramallah, the Israeli prime minister, Benjamin Netanyahu (pictured here), is targeting the Palestinian unity government with the army's recent actions. "For weeks now, Netanyahu has been calling on Palestinian President Mahmoud Abbas to revoke the reconciliation process with Hamas," writes Wildangel

The Israeli prime minister is evidently trying to torpedo the Palestinian unity government with these large-scale Israeli military actions. For weeks now, Netanyahu has been calling on Palestinian President Mahmoud Abbas to revoke the reconciliation process with Hamas. A strong and unified Palestinian leadership, which would develop a new political strategy following the breakdown of recent negotiations, and which would even receive international support in this endeavour, would be a nightmare for Netanyahu.

Meanwhile, Abbas currently seems more helpless than ever. Although he assured Netanyahu that he would do everything within his power to find the abducted youths and call the perpetrators to account, he cannot guarantee the safety of his own people. His own security forces do not have access to 80 per cent of the West Bank, and the Israeli army is also now advancing in the few quasi-autonomous regions.

Abbas' description of the security co-operation with Israel as "sacred" has earned him much derision. This has led to a further loss of faith in the Palestinian leadership; in Ramallah a campaign has been launched with the slogan "I am Palestinian – Mahmoud Abbas does not represent me."

The Israeli strategy of military escalation compromises the security and integrity of the Palestinian civilian population. The Israeli army's actions against civilians are disproportionate and have the quality of a collective punishment that cannot be justified as part of the search for the abducted youths. In the context of international law, these actions are a serious infringement of the Geneva Conventions and threaten to provoke a new flare-up of violence.

It is of urgent importance that international attention now focuses on the protection of the Palestinian civilian population. Israel has been accelerating the expansion of West Bank settlements for months already; there has been an increase in the number of Palestinian houses being destroyed, as well as the frequency of attacks by the settlers themselves. The UN says even before this current crisis began, 11 Palestinian civilians have been killed by the Israeli army so far this year, and more than 1,000 injured.

Most recently in May 2014, two unarmed Palestinian teenagers were shot dead. The brutal images were captured by a security camera. Human Rights Watch described the incident as a war crime. There was, however, no international outcry. Many Palestinians feel helpless in the face of the more recent and vociferous international clamour calling for the three abducted youths to be freed unharmed, but ignoring the safety of millions of civilians in the West Bank and the Gaza Strip. 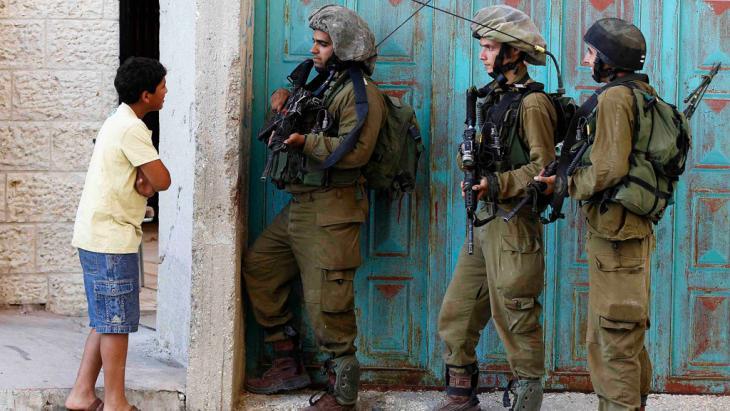 "The Israeli strategy of military escalation compromises the security and integrity of the Palestinian civilian population. The Israeli army's actions against civilians are disproportionate and have the quality of a collective punishment that cannot be justified as part of the search for the abducted youths," writes René Wildangel

The Palestinian people are defenceless and at the mercy of attacks perpetrated by the army and Israeli settlers. The Palestinian news agency Maan recently reported on an armed attack by settlers in Al-Bireh, a district of Ramallah.

The fact that settlers from Psagot attacked mourners burying a Palestinian who was shot dead in the violence illustrates the absurdity of the situation. After all, the declared goal of the Israeli Defence Ministry is to find the youths and to safeguard the "residents of Judea and Samaria", in other words the Israeli settlers in the West Bank.

It is to be hoped that the three youngsters will be released unharmed in the near future. Nevertheless, the way their fate is currently being exploited for political ends is nothing short of cynical.

The public discourse omits to consider the fact that the huge expansion of illegal settlements in the West Bank and East Jerusalem not only endangers the safety of the Palestinian people, but also that of the Israeli citizens living there.

Until such time as a political solution that will put an end to occupation is found, no military measures – no matter how drastic – will be able to guarantee the safety of hundreds of thousands of West Bank settlers.

René Wildangel is director of the Heinrich Böll Foundation in Ramallah.

Hamas in Gaza, the Palestinian Authority in the West Bank, and Israel: Palestinians have fewer and fewer rights, says Khaled Elgindy. The Middle East could escalate at any time. ... END_OF_DOCUMENT_TOKEN_TO_BE_REPLACED

Joe Biden promised to make democracy and human rights central to US foreign policy. But that means not insisting on Israel's right to defend itself without mentioning its ... END_OF_DOCUMENT_TOKEN_TO_BE_REPLACED

As the Biden administration attempts to promote democracy and human rights in the Middle East, it will confront the deep-seated belief among Arabs that U.S. policies are unfair to ... END_OF_DOCUMENT_TOKEN_TO_BE_REPLACED

Ben Aylon’s debut international album sees him elevate the traditional music and instruments of Senegal and Mali into a fresh contemporary setting. Seven years in the making, " ... END_OF_DOCUMENT_TOKEN_TO_BE_REPLACED

Years ago, the International Holocaust Remembrance Alliance formulated how hatred of Jews can be recognised. Now a new definition is causing controversy. By Sarah Judith Hofmann END_OF_DOCUMENT_TOKEN_TO_BE_REPLACED

When it comes to talent, Palestine may well be able to compete with other football teams in the region, but growth and development are hampered by the situation in the Palestinian ... END_OF_DOCUMENT_TOKEN_TO_BE_REPLACED

Comments for this article: The punishment of Palestinian citizens

END_OF_DOCUMENT_TOKEN_TO_BE_REPLACED
Social media
and networks
Subscribe to our
newsletter