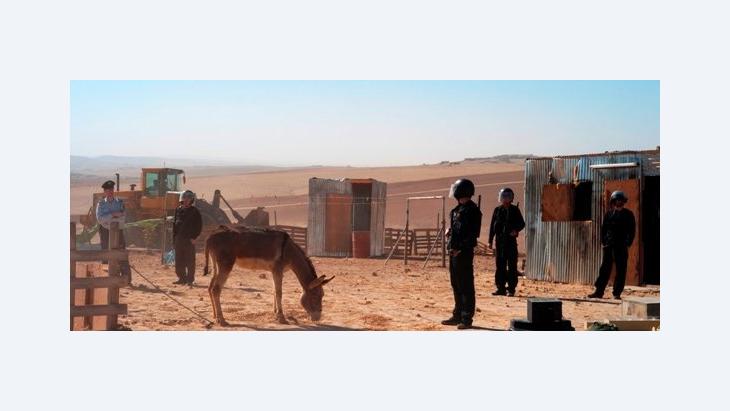 The Israeli Film ''Sharqiya''
Grappling with the Plight of Israel's Bedouins

﻿"Sharqiya" is the first Israeli film to deal with the dire situation of the country's Bedouins. At the film's international premiere at the Berlinale Film Festival in Germany, Igal Avidan spoke to screenwriter Guy Ofran, director Ami Livne and lead actor Adnan Abu Wadi

How did the idea to this film come about?

Guy Ofran: I grew up in a remote Jewish village in the Negev desert and went to school together with children of a neighboring Bedouin family. As a child that was normal for me. But as a soldier I noticed that my Bedouin buddies were tagged as "thieves". The father of my Bedouin school-mates supported Israel in 1948 and received in return a piece of land, though the act was sealed with a handshake and without documents.

After he died, the state wanted to tear down the family camp. Jewish Israelis from the whole area are supporting the Bedouin family because the Bedouins had lived there before most Israelis did. The state wants to resettle them but they want to stay.

Is your feature film based on a real incident?

Ofran: A couple of years ago there was the incident where a Bedouin security guard who worked at the central bus station threw himself over a terrorist who blew himself in the air. 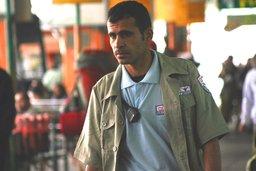 "Bedouins are gradually losing faith in this state." - Kamel (Adnan Abu Wadi) on his job as a security guard at the Beer Sheba Central Bus Station.

​​The Bedouin was severely wounded, but the state would not recognize him as a victim of terror. At first we wanted to make a movie out of his story, but instead we created the fictive figure of Kamel.

How did you get your first role as an actor?

Adnan Abu Wadi: A friend called me up and told me about a desperate filmmaker who had been looking for an actor for three years and who was just driving back to Tel Aviv from the Bedouin city of Rahat. I live not far from there in an unrecognized village. This didn't interest me because I'm not an actor. In fact, I work as a security guard, I also have a job for the railway company.

But my friend insisted, so I agreed to a spontaneous meeting. The clandestine audition took place under a highway bridge, just like in a drug deal, because I didn't want anyone from my village to find out about this.

What does the word "Sharqiya" mean?

Ami Livne: That's how the Bedouins call an Eastern wind, which they regard as evil and dangerous.

Abu Wadi: Because it carries dust and heat, and dries the body. What the Bedouins go through these days in the South of Israel is a "Sharqiya": The demolishing of many houses. Some 70,000 of them live in so called "illegal settlements".

Although our family has been living in the same place for three generations, our village where 350 families live is tagged "illegal". All our construction requests were turned down. I don't want to live in a locality in which Bedouins live at closed quarters, that will inevitably lead to many problems.

Are you also waiting for a building permit?

Abu Wadi: I have been waiting for six years now. I still live with my parents although I'm 30. But without a house I cannot get married. Where shall my girlfriend live? 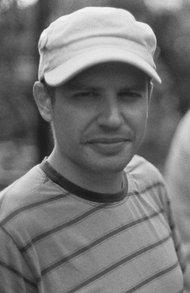 ​​Our house is more than cramped. We built this stone house nine years ago. Back then it was still possible. Only in recent years do they consistently tear down houses built without a permit. They even tore down my cousin's tent.

Did you do military service?

Abu Wadi: No. These days hardly anyone here joins the Israeli army. Recently a Bedouin border guard returned home for leave and found a bulldozer destroying his house. He was in uniform, but nobody cared for that. So why should our young people here join the army? We live together in one state, I have many Jewish friends, but I oppose the government policies.

Last September, the government decided to recognize part of the illegal Bedouin villages, but resettle 30.000 Bedouins. Only those who would be able to prove their right on the land will be compensated. Bedouin representatives call this "a declaration of war".

Abu Wadi: People here have protested against this decision and blocked main roads, but I don't see a Bedouin uprising or "Intifada" coming.

Ofran: Before I wrote the script, I had driven with my mother in this area and passed by many Bedouin villages.

My mother said the new Intifada will break out here because when you pressure someone so much he goes overboard. When the state doesn't give these people electricity, waterlines or work, when they lose their source of income due to resettlement it creates a socially explosive situation.

Livne: Violent clashes are possible, but I think an uprising is unlikely because the Bedouins are divided. Each tribe and every villages fights for its own interests.

In 2007 an Israeli farmer shot two Bedouins who broke into his ranch in the Negev desert. He wounded one of them severely and killed another. Following an initiative of far-right politicians, in 2008 Parliament adopted a law which legalizes such acts as self-defense. For this reason, a court acquitted the famer in 2009 of the charge of killing and severe assault. The wounded Bedouin however was sentenced to 20 months in jail.

Ofran: This law is appalling and anti-Arab. Had the farmer shot a Jewish burglar, he would have landed in jail.

Abu Wadi: This case shocked me because we are citizens of this state. 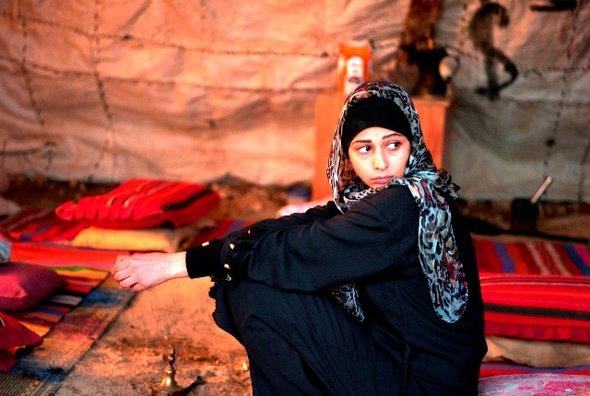 Second-class citizens: Estimated to number some 160,000, Arab Bedoiuns comprise 12% of the Arab citizenry of Israel. In 1984, the courts ruled that the Bedouin had no land ownership claims, effectively illegalizing their existing settlements

​​Still in my village there is no electricity and many Bedouin villages have no water lines. The Bedouins are gradually losing faith in this state.

Livne: This law is a license to kill. I agree that the farmer would never have been adopted had the thief been Jewish.

How was it like to do this film with Bedouin participation?

Livne: I highly appreciate the Bedouin way of life in accord with nature. But I criticize their closed society, which doesn't allow self-criticism. For this reason it was difficult to make this film. I was constantly afraid that Bedouins could disrupt our project. It took long until we found Bedouins who would let us film on their land. 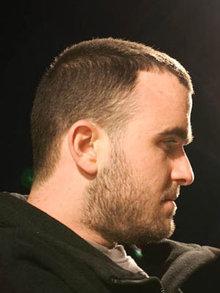 ​​Many Bedouins whom we have reached through our contacts would welcome us in a friendly way, but after a few days would send us away.

Abu Wadi: In my village it would have been too stressful to shoot in front of all my acquaintance. Besides, it's only the land authority that films here – one week before they come to demolish houses. That's why people here are suspicious when a film team shows up.

Where did you finally shoot the film?

Livne: A Bedouin family built the location for us on their land. The production company had actually applied for a permit, but was turned down by the authorities.

For fear they would tear down our film set, we built it only two days before shooting and shot the whole film in just five days. Finally, we destroyed the set ourselves in one of the scenes.

Do you think your film can help to prevent the planned resettlement of Bedouins?

Abu Wadi: I don't think so, but at least it presents our reality to the audience here in Israel.

Livne: I hope that the film, which I regard as patriotic, can make a change and that our criticism will put an end to this injustice.

Ofran: At least this is the first Israeli feature film in which the Bedouins are the heroes. This alone is already a huge success. Kamel and Adnan are Israeli patriots, which is anything but self-evident.

A leading light of Israeli theatre, Ofir Henig has directed the Israel Festival and is the only female director to have been awarded the Israel Theatre Prize. These days, however ... END_OF_DOCUMENT_TOKEN_TO_BE_REPLACED

With the current leadership of Iran quick to lay the blame for the Iran protests on Israel, the chances of harmonious relations between the two countries still seems remote. Yet, ... END_OF_DOCUMENT_TOKEN_TO_BE_REPLACED

Daniel Barenboim is not only a world-famous pianist and conductor. He has also worked tirelessly to foster understanding and reconciliation between Palestinians and Israelis. By ... END_OF_DOCUMENT_TOKEN_TO_BE_REPLACED

After a two-year hiatus, the Arab League re-convened at the beginning of November in Algiers against a backdrop of uncertainty and discord. By Pierre Boussel END_OF_DOCUMENT_TOKEN_TO_BE_REPLACED

On 1 November, elections are set to take place in Israel for the fifth time in four years. If Arab minority voters decide to stay home out of frustration at their divided parties ... END_OF_DOCUMENT_TOKEN_TO_BE_REPLACED
Author:
Igal Avidan
Date:
Mail:
Send via mail

END_OF_DOCUMENT_TOKEN_TO_BE_REPLACED
Social media
and networks
Subscribe to our
newsletter