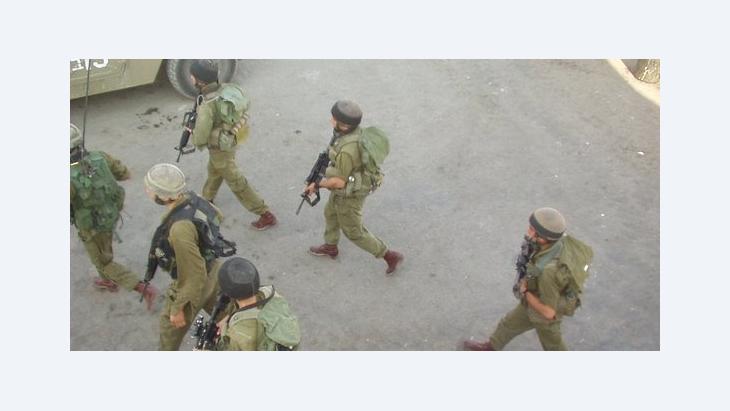 The Israeli NGO "Breaking the Silence" shows the excesses of the Israeli army in the Palestinian territories. The activists are not pro-Palestine activists, but former Israeli army soldiers

For a year and two months, Nadav Weiman trained to serve with one of his army's special units. At the age of 18, he learned how to operate tanks, search people, break into houses and ambush and eliminate a terrorist. Everyone in Israel must absolve three years' military service. Anyone who refuses is arrested.

Theory was soon followed up by practice. Weiman's first mission was as part of a 12-man sniper squad. In Jenin, on the West Bank – one of the most dangerous flashpoints in the Middle East conflict. "Suddenly I was in hell," says Weiman. 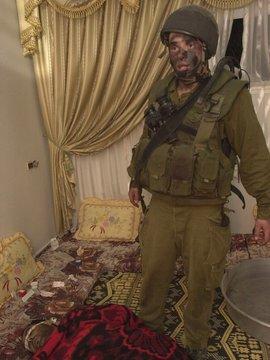 "It's like a big video game." – An Israeli soldier on duty in a Palestinian home

​​His team had been ordered to find a Palestinian house and turn it into a post of the Israeli Defence Forces, IDF – a commonplace task that Weiman was soon expected to carry out three to four times a week. The procedure is routine: first checks are run with the intelligence service as to whether there are any terrorists in the house. Only when it is certain that the family is innocent, is the house stormed.

"It's like a big video game," says Weiman. It all happens very quickly. Dressed in camouflage and with a weapon in his hand, he suddenly found himself standing in a strange family's living room. "My first thought at that moment was: Is this what defending my country is all about?"

The unsuspecting people are hauled out of their beds, their mobile phones confiscated. They have to leave the house, from where the Israeli army now wants to shoot at terror suspects.

Nadav Weiman is now 26 years old. For a year now, he's been a member of the organisation "Breaking the Silence", founded in March 2004 by former Israeli soldiers. The aim of "Breaking the Silence" is to enlighten the Israeli public and show them, with the help of witness statements from hundreds of soldiers, what is happening in their country on a daily basis. Project initiators hope this will overcome the huge gulf in Israel between the perception the reality of what its army is actually doing.

"Breaking the Silence" talks of a "moral decline" that has permeated all sections of the army as well as Israeli society in recent years. Injustices and acts of harassment that used to be the exception have become the rule. "Breaking the Silence" publicity material claims: "While we are protecting ourselves from danger, we are creating a further catastrophe."

"Nobody in Israel knows what's really happening. We want to encourage people to ask questions," says Weiman. In order to do this, "Breaking the Silence" organises lectures at universities for example, and city tours in the Palestinian territories.

The exhibition "Breaking the Silence", now on show for two weeks at the Willy Brandt Haus in Berlin, Germany, shows what everyday life is like during the occupation using photos taken by the soldiers themselves.

Weiman is a member of the NGO and until 29 September, he will conduct guided tours of the exhibition. Together with other ex-soldiers, he tells visitors about his experiences. Weiman stops his group alongside the pictures that mean the most to him. 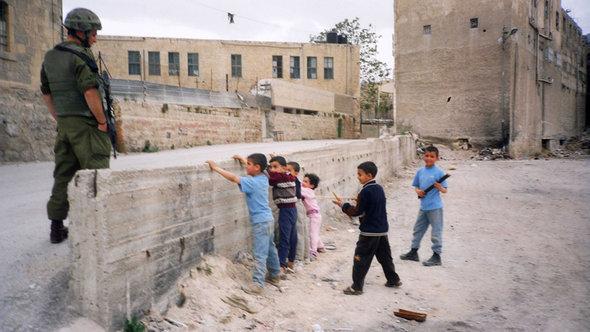 Activists of "Breaking the Silence" say a "moral decline" has permeated all sections of the army as well as Israeli society in recent years. Palestinian children enact a checkpoint control scene in front of an Israeli soldier

​​One shows a group of Palestinian children in the street, role-playing scenes from a checkpoint control. An Israeli soldier is on patrol nearby, laughing. "I played cowboys when I was a boy. These children are pretending to arrest each other," Weiman tells his tour group. Sometimes he runs a hand through his hair. The lives of these children are blighted by the occupation right from the start.

The exhibition includes a long wall rail from which dangle dozens of bunches of keys. These are the keys confiscated by Israeli soldiers from Palestinians at a single checkpoint over the course of one month. The reasons for the confiscation are often quite arbitrary: Perhaps someone was driving too fast, perhaps the soldier was simply irritated.

For Weiman, a bunch of keys represents more than just keys for the car or the office, to someone's home, or their grandmother's house. "When you take away someone's keys, you also take away their rights," he says. The keys are a symbol of just how far the Israeli army is invading Palestinian lives. "We can do whatever we like," says Weiman.

Then there are the images of soldiers who have photos taken of themselves with detained Palestinians at checkpoints. The detainees are wearing blindfolds and are presented as trophies by the soldiers, who smile and pose for the camera.

The pictures were taken in the year 2004. The first such case didn't go public in Israel until 2010, when a female soldier uploaded pictures of herself with prisoners onto Facebook. For Weiman this is not an exceptional case, but common practice among young people on military service. "But it's easier for Israel to dismiss it as a one-off," he says. 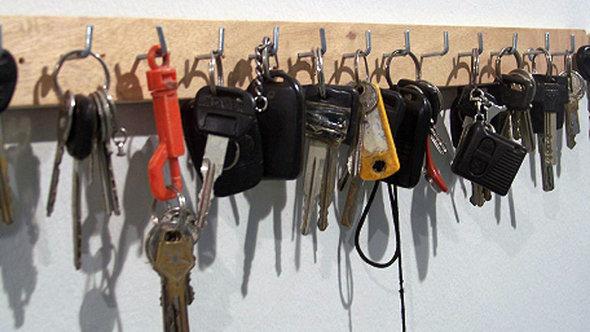 "In Israel, military service defines who you are"

For many young Israelis, military service is synonymous with attaining manhood – an initiation rite with a gun. In Nadav Weiman's case, it was his friends and family who expected him to absolve his military service. His father and grandfather were both officers, his brother still serves as an officer. "In Israel, military service defines who you are. It determines the opportunities you will have in life," says Weiman. He knew that as a member of a special unit, he would later fare better in the professional world.

But after the first house clearance in Jenin, Weiman started to feel uneasy. Fluctuating between a sense of wanting to follow orders and finding the moral justification of these orders difficult, it was a while before he opened up to his colleagues. His critical stance earned him the nickname "lefty". But debate did take place, after every mission. "We sat down as a team and reviewed the operation over coffee, and considered what we might do differently the next time," says Weiman.

Weiman's colleagues in the unit were aware of his unease, and assigned him to scouting duties as a result. It was left to someone else to pull the trigger.

The 26-year-old clearly recalls a winter evening in the year 2006. It was one of Weiman's first operations. On a rooftop 520 metres away, he spotted a man with a radio in his hand. In the eyes of the IDF, he was a potential threat. So the order came through: shoot him!

"You're looking at the last moment in the life of this man. It's a matter of just a few seconds. You watch a small dot fall. It was over," says Weiman, and adds: "We were so young."

When Weiman returned to base after the operation, he and his team-mates were treated like heroes: You've killed a terrorist! But for Weiman, this dot in the distance was no terrorist. After that night, the questions just kept on coming.

Later, when Weiman and his fellow soldiers encountered a similar situation during a different operation, they deliberately misfired. On this occasion, the suspect was standing with his children holding a walkie-talkie. The soldiers fired at the wall, the man was able to escape. 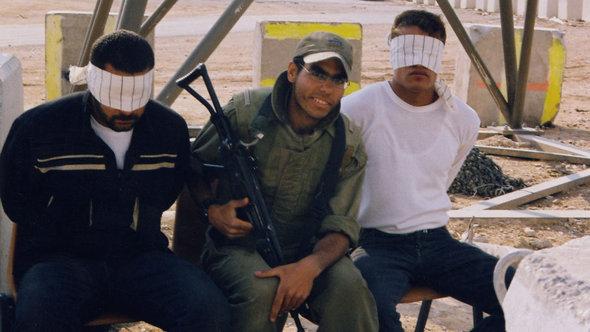 ​​After military service, many Israelis end up in India, smoking dope as an antidote to the memories. Nadav Weiman backpacked through South America. The newly-discharge soldier met many foreigners on his trip. "The Europeans asked me many questions. The Americans were proud of me," says Weiman.

These days, he's a teacher of Hebrew and history in his hometown of Tel Aviv. He's trying to make an impression on the children, he says, to encourage them to instigate change.

"Breaking the Silence" is the only organisation in Israel that enables former soldiers to process and express their experiences. And not everyone is happy about that. Israel's hardline foreign minister Avigdor Lieberman views the members of "Breaking the Silence" as "supporters of terrorism". Weiman's fellow soldiers were also initially critical of his involvement in the project. Weiman is aware that his activism could put him in danger, especially under the current government, which is one of the most obstinate parties in the Middle East conflict.

But, he says, among the young there are also critical voices that often remain hidden. When Tel Aviv's streets were thronged with protesters several months ago, many people wondered: Could the huge sums spent on the occupation not be put to better use and dedicated to measures aimed at improving social justice at home? A question no one dared to ask. Nadav Weiman says this is why he joined "Breaking the Silence" – to do just that.

Asmaa al-Atawna's debut novel "Missing Picture" has been published in German translation (Keine Luft zum Atmen – Mein Weg in die Freiheit). In it, she describes life in Gaza from ... END_OF_DOCUMENT_TOKEN_TO_BE_REPLACED

At the end of every year, the team at Qantara.de gives you a run-down of the ten most-read articles on the site over the past 12 months. Here is a quick overview of the stories ... END_OF_DOCUMENT_TOKEN_TO_BE_REPLACED

Palestinian Christians are an integral part of the Palestinian national movement. This is the conclusion reached by the Chilean-born Palestinian political scientist Xavier Abu Eid ... END_OF_DOCUMENT_TOKEN_TO_BE_REPLACED

Jesus – Issa in Arabic – doesn’t merely enjoy the highest place among the prophets in the Koran. He is also revered in Islam’s mystical tradition for his message of love and mercy ... END_OF_DOCUMENT_TOKEN_TO_BE_REPLACED

With reported hostilities against Israeli journalists and the flag of the Palestinian territories flying on the streets and in the stadiums, it is clear the World Cup in Qatar is ... END_OF_DOCUMENT_TOKEN_TO_BE_REPLACED
Author:
Marian Brehmer
Date:
Mail:
Send via mail

END_OF_DOCUMENT_TOKEN_TO_BE_REPLACED
Social media
and networks
Subscribe to our
newsletter