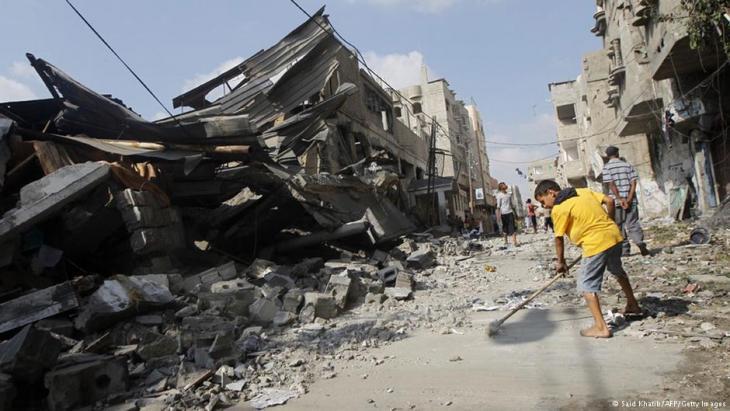 The Israeli–Palestinian conflict in Gaza

The escalating conflict between Israel and the Palestinian group Hamas has been accompanied on both sides by massive propaganda drives. According to Joseph Croitoru, each side is attempting to speak directly to the opposing side through its propaganda

The renewed war of bombs and rockets currently raging between Israel and the Palestinian Islamists in the Gaza Strip is, as usual, flanked by a media war. This time, it is being waged even more mercilessly than in previous armed conflicts, and winning it seems at least as important as a military victory.

But while neither side ever seems to tire of celebrating its own superiority and portraying itself as the victor, so far – at least in some respects – Hamas seems to be getting more out of the propaganda war than the Israeli military.

One of the Islamists' successes is that these days, hardly a single Israeli news portal can avoid showing their propaganda videos. The same can be said of Israeli state television. The fierce competition on the Israeli media market is not the only reason for this. The increasing potency of the Palestinian propaganda material is due to the fact that it is broadcast in three languages: Arabic, English and Hebrew.

For example, a video from the al-Qassam brigades, the military arm of Hamas, has been attracting a great deal of attention on the portal of the popular Israeli daily newspaper "Jediot Achronot". Qassam has come up with a real novelty: for the first time ever, this fast-paced montage of rockets being constructed and fired, Qassam infantry training for battle and Qassam rockets apparently hitting Israeli tanks is accompanied by a propaganda song composed and sung in Hebrew.

The newspaper has transcribed an excerpt for its readers, but only in order to make fun of the singing Qassam fighters' heavy Arabic accents and their mispronunciation of some words. A few of the song's lines go: "You will carry out attacks / destroy all the Zionists / seek battle with them / let their military bases and soldiers go up in flames / and their weak state, shaken to its core / we are carrying on the war."

For their part, the Hamas propagandists rely on footage filmed by the Israeli side for their media productions. This is the only way they can show the impact of their rockets on Israeli soil and Israelis themselves, running to underground shelters as the sirens sound. Their video even uses pictures from the Israeli military's own press department: the evacuation of injured Israeli soldiers, simulated for training purposes, is cut into a sequence of images in such a way as to make the whole thing look real – albeit not to the practised eye of the average Israeli media consumer.

Over the last few years, Israelis have been presented with increasing numbers of photos and videos from the army's media factory, which are frequently used by media outlets close to the government. The "retaliatory" bombing of houses occupied by Palestinian terrorists, for example, which journalists were not even allowed to photograph in the past, is now filmed by employees of the military's press department for immediate broadcast. Just a few hours later, the videos can be found on news portals like that of the pro-government newspaper "Jisrael Hayom". 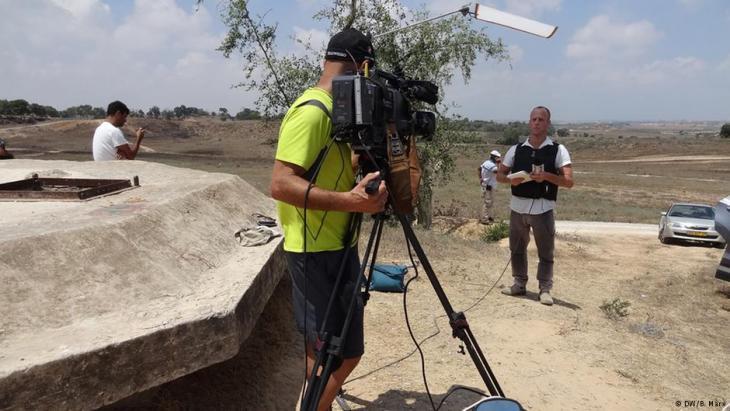 The paradox of war: both Israeli and Hamas media outlets use propaganda material from the other side in the current "media war". Moreover, both sides are keen to demonstrate their military superiority and to address the other by preparing material in both Arabic and Hebrew, and sometimes also in English

The videos from the current conflict, made available by the army, are now everywhere in the Israeli media. The public has grown used to images of attacks that have been carried out with "surgical precision" and filmed by fighter jets or drones. They don't show the so-called "collateral damage" – which in any case supposedly doesn't exist; after all, the army leaders say they warn the Palestinian population prior to every planned bombardment.

Recently, an increasing number of video sequences filmed from Israeli warships has been made available. The army is relentlessly flaunting its own technological advantage when it comes to the video documentation of its own strikes; the Palestinians have nothing but animations and montages to show in return. In one of these videos, some Qassam fighters who have managed to reach an Israeli beach by sea are fired upon with such intensity that a cloud of sand is all that can be seen on the footage.

The Israeli navy's penchant for filming its own ships' weaponry in action is quite similar in style to the way Hamas demonstrates its own fire power. Who or what the missiles hit is not made known. The dehumanising aesthetic of weapons is something seen on both sides of the divide in this war of images.

The same is true of the false reports of successes, whereby the deliberate spreading of such reports is more a strategy of the Palestinian Islamists. Since time immemorial, Hamas's Qassam units and the Islamic Jihad's al-Quds brigades have been attempting to compensate for their inferior weapons technology with exaggerated claims of losses suffered by the "Zionist enemy". Now, they are using all the channels at their disposal to spread these claims – from Hamas's own TV and radio station, al-Aksa, to multi-lingual websites and Facebook and Twitter pages.

The comprehensive use of modern communication technology is an attempt by the Qassam brigades, who regard themselves as a regular army and portray themselves as such, to appear equal to the Israeli military as far as possible. Recently, the two camps have been neck and neck when it comes to broadcasting their messages in the language of the enemy. The Israeli military has an Arabic website; Qassam's information office has one in Hebrew.

That being said, there is little information about the most recent military operation on the Israeli website. It does, however, present the experiences of one of the first female Muslim soldiers in the Israeli army.

Qassam's Hebrew Internet presence, meanwhile, does not seem to have quite got past the test phase yet. Nevertheless, this does not prevent the Islamists from threatening Israeli soldiers in a bilingual video that "hell" is waiting for them in Gaza. The website also features another media first: pictures taken by the first Hamas drone over Israeli territory.

As someone accustomed to presenting his country to interested outsiders, Israeli teacher and tour guide Noam Yatsiv makes the case for a more nuanced appreciation of the ... END_OF_DOCUMENT_TOKEN_TO_BE_REPLACED

Jewish voices are much more diverse than the public often sees. Jewish men and women who oppose the injustice of Israeli occupation in the West Bank deserve our respect and ... END_OF_DOCUMENT_TOKEN_TO_BE_REPLACED

The Germans have a fragmented perception of the conflict between Israel and the Palestinians, and their discourse is dominated by certain catchphrases. All the while, there is a ... END_OF_DOCUMENT_TOKEN_TO_BE_REPLACED

An unusual organisation brings Jews and Muslims together to fight hate and promote dialogue. In the small central German city of Marburg they have been jointly calling for an end ... END_OF_DOCUMENT_TOKEN_TO_BE_REPLACED

Professor Timothy Brennan's "Places of Mind: A Life of Edward Said" is a detailed biography of one of the most important intellectuals of the twentieth century, taking us on a ... END_OF_DOCUMENT_TOKEN_TO_BE_REPLACED

Yair Lapid, like his late father, is a journalist-turned-politician renowned for his staunchly secular positions. But as the centrist politician edges towards the Israeli ... END_OF_DOCUMENT_TOKEN_TO_BE_REPLACED
Author:
Joseph Croitoru
Date:
Mail:
Send via mail

END_OF_DOCUMENT_TOKEN_TO_BE_REPLACED
Social media
and networks
Subscribe to our
newsletter