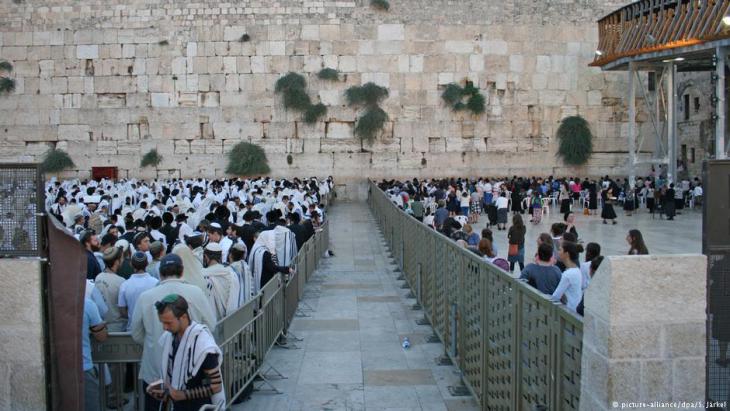 The majesty and the misery

Shortly after Trump said the US would recognise Jerusalem as Israel's capital, the Jewish Museum Berlin opened a long-planned exhibition about Jerusalem, a city saturated with religion, politics, conflict and beauty. By Werner Bloch

After US President Donald Trump declared Jerusalem "the eternal capital of the Israeli state", and Israeli Prime Minister Benjamin Netanyahu called on European countries to follow suit, the political situation in the Middle East has become more volatile than ever.

In a coincidence that was neither expected nor intended, Berlin's Jewish Museum has just opened an intriguing exhibition on Jerusalem. The title of the exhibition, which has been in the works for years, is "Welcome to Jerusalem", which could sound ambivalent or even ironic in the current geopolitical context.

"Jerusalem is a city that can mean both hell and heaven on earth," explains curator Cilly Kugelmann. "We spent a lot of time thinking about how we could handle such a complex theme with just a few square metres at our disposal. We decided to focus on the holiness of the city that outshines everything, its vivid times, its quiet times, its politically active times," says Kugelmann. "One could almost say that Jerusalem has been contaminated by holiness."

But how do you create an exhibition about "holiness", which cannot, after all, be measured? Kugelmann opted to focus on the city's famous "aura", a kind of special light that makes some visitors feel closer to God. For the inhabitants of Jerusalem, however, bathing in this light is not always a pleasure, because as much as it is holy, Jerusalem, with its confrontations and existential threats, is also at the centre of the Middle East conflict. Moreover, this "contamination with holiness", as suggested by the exhibition, fans the flames of the conflict more frequently than it calms them. 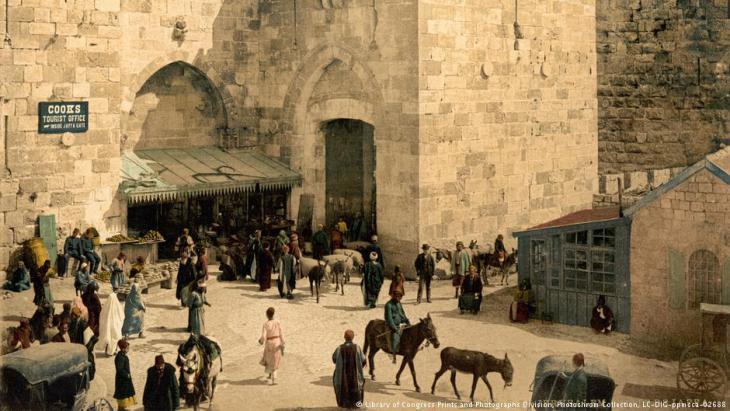 It is not often that an exhibition is unintentionally so perfectly timed as this one: shortly after Trump said the US would recognise Jerusalem as Israel's capital, the Jewish Museum in Berlin opened an exhibition on the city where religion and politics are inextricably linked. Pictured here: an exhibit from the exhibition "Welcome to Jerusalem", dated ca. 1900. Note the advertisement for the Thomas Cook Travel Agency on the wall

Berlin's Jewish Museum offers visitors a unique walk through the majesty and misery of a city that has uniquely inspired travellers from all over the world. Among the items exhibited in 15 separate rooms are architectural models, films, artworks, as well as rare maps – some of which were freely invented by Middle Age cartographers trying to lead themselves to the worldly and heavenly Jerusalem.

"Welcome to Jerusalem" is about total immersion. The exhibition thrusts visitors into an atmosphere of visual and audio impressions. Three screens show "24 Hours Jerusalem", a film by Berlin director Volker Heise. Dozens of crews moved around the city on one day, capturing a variety of scenes that are shown at the exhibition in real time.

At one point, visitors are bombarded with simultaneous images of a bakery, wet cobblestones in the city's historic centre and modern West Jerusalem. A helicopter makes its rounds above the city; a group of Swabian pilgrims sing religious songs in a bus as they approach the Holy City; a group of pious Jewish men pray at the Wailing Wall. The fact that there are protests about even this is part and parcel of what Jerusalem is: liberal Jewish women demand the same right to pray there and are brutally pushed back by bearded men. Fists fly. Religion and brutality stand side by side in Jerusalem. 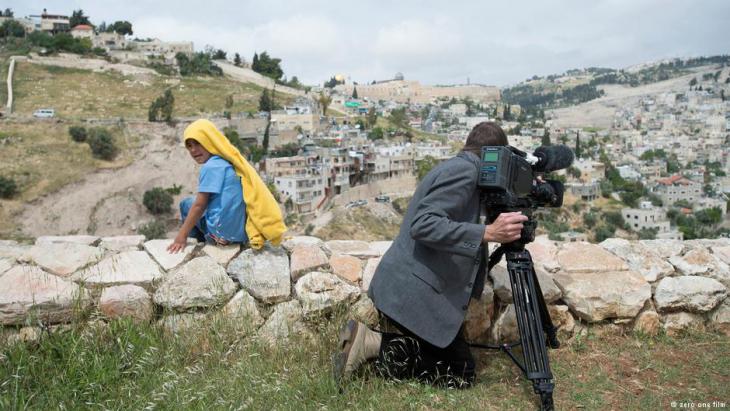 A still from the film "24 hours Jerusalem", by Volker Heise and Thomas Kufus, which captures a variety of scenes all shot on the one day in Jerusalem. The film is shown at the "Welcome to Jerusalem" exhibition

To whom does Jerusalem belong?

This question cannot be answered one way or the other. Although the Berlin exhibition has vowed to remain apolitical, it doesn't shy away from addressing conflicts. The exhibition includes a "Conflict Room" that magnifies existing tensions and dissonances. In contrast, other parts of the exhibition are reminiscent of a museum of religion: the three monotheistic religions of Judaism, Christianity and Islam stand peacefully side by side, accompanied by texts in German, English and Arabic.

It comes as no surprise that Judaism is at the centre of the Jewish Museum's exhibition. Christianity is mainly represented by a bewildering array of crosses, among them numerous olive-wood crosses of the kind used by Palestinian Christians.

What seems to be lacking are references to the Crusades. According to Cilly Kugelmann, it wasn't possible to find the appropriate exhibits. And yet such historical documents have a lot to say about the issue of religious tolerance.

Following the conquest of Jerusalem during the First Crusade of 1099, a Christian chronicler described the blood on the streets: "Jews were kettled in a synagogue to be killed with a sword, while tens of thousands of Muslims were brutally massacred. There were piles of heads, hands and feet. Truly, this was a just ordeal, filling the place with the blood of the unfaithful. When they couldn't find any more people to be assassinated, the crusaders moved on to the Church of the Holy Sepulchre while singing their hymns. They went on to celebrate the Easter liturgy right next to Christ's tomb."

Kugelmann sticks to her theory about the city's holiness: "A layer of holiness overlies everything that happens in this city. And the less it seems possible to find secular, conventional solutions to the conflicts, the more people focus on the metaphysical roots of the city," she says.

The dialogue between the different population groups remains difficult. When the organisers of "Welcome to Jerusalem" called on Palestinians to contribute documents and exhibits to the exhibition, they were rebuffed. "The Palestinians insist on the maximum solution; they don't want to participate in an exhibition that has been organised by and with Jews," comments Kugelmann, who served as the programme director of the Jewish Museum from 2002 to March 2017.

Of all people, however, one of the Palestinians' most important female artists, Mona Hatoum, who is known for her fierce criticism of Israeli occupation, contributed an artwork to the exhibition. Entitled "Present Tense", it depicts what she calls "the new outlines of Palestine" on a mosaic consisting of square pieces of soap, recalling the soap production in Nablus, renowned since Antiquity and part of Palestinian cultural identity. Because of Israeli attacks and the encroachment on the historic centre of Nablus, traditional soap production there has come to a halt. 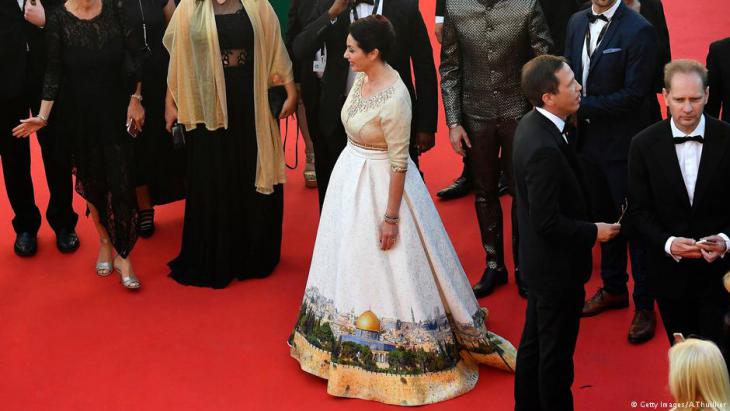 The dress that launched an online uproar: worn by Israeli Culture Minister Miri Regev at the 2017 Cannes Film Festival, the dress, which featured a print of the Jerusalem skyline, was a sartorial expression of the Israeli government's claim to the eastern part of the city

Facing the conflict head on

"Welcome to Jerusalem" has successfully refrained from whitewashing existing conflicts. Instead of posting beautiful and uplifting pictures to warm the cockles or giving travel brochure photographers a run for their money, the exhibition is not afraid to highlight the city's contradictions.

It features, for example, a Palestinian grandfather who travels to Jerusalem with a big key. He points at a house that once belonged to his family until they were expelled in 1948. "I thought this was only a military exercise, and that we would just wait until it was over to then return to our house," he explains.

Another exhibit references the controversial dress worn by Israeli Culture Minister Miri Regev at the 2017 Cannes Film Festival. It was printed with the Jerusalem skyline, including the Al-Aqsa Mosque and the Dome of the Rock, and was an explicit political statement of the current Israeli government's claim to the eastern part of the city. The dress was consumed by an inferno of digital comment on social media. A cardboard reproduction of her provocative fashion choice is part of the exhibition.

"Jerusalem of Gold" is one of the slogans used to market the city, capitalising on the unique selling points of its aura of holiness, its special light, which has been described by many an author including Amos Oz, and can unexpectedly overwhelm those visiting Jerusalem. Down through the centuries, travellers have been known to be affected by "Jerusalem syndrome", a psychological condition suddenly triggered by a visit to the city, which leads people to develop religiously themed obsessions.

While promising salvation to pilgrims, Jerusalem also keeps on breeding new waves of violence. A group of Jewish extremists has founded the Temple Institute, which is already preparing for the construction of the "Third Temple". According to the Jewish faith, the Third Temple may only be constructed after the Messiah's return. But some extremists are obviously trying to speed up the process. Large funds support this movement, and it has already recreated equipment for the temple, including the Golden Menorah. The institute's ultimate goal is to tear down the Haram al Sharif, the Dome of the Rock and the Al-Aqsa Mosque. It could be the beginning of a Third Intifada.

The exhibition "Welcome to Jerusalem" runs until 30 April 2019 at the Jewish Museum Berlin.

In an act of subversive diplomacy, Israeli singer and actress Liraz Charhi has recorded her latest album in secret collaboration with Iranian artists. By Carl Holm END_OF_DOCUMENT_TOKEN_TO_BE_REPLACED

A German IT company has started an academy to train Palestinians in software development. Despite the pandemic's challenges, it has managed to run its first boot camp in Ramallah ... END_OF_DOCUMENT_TOKEN_TO_BE_REPLACED

This summer it was reported that Israel had abandoned its plan to annex parts of the occupied West Bank. Now, however, Israel is driving forward its settlement programme in the ... END_OF_DOCUMENT_TOKEN_TO_BE_REPLACED

Conceived by Israeli journalist and rabbi Elhanan Miller, "People of the Book" is a YouTube project designed to provide information on Judaism in Arabic. Disarming prejudice with ... END_OF_DOCUMENT_TOKEN_TO_BE_REPLACED

END_OF_DOCUMENT_TOKEN_TO_BE_REPLACED
Social media
and networks
Subscribe to our
newsletter