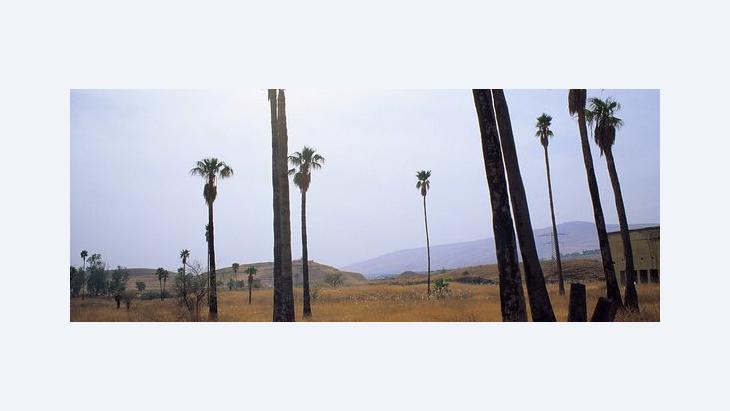 The environmental organization Friends of the Earth Middle East is planning to set up a peace park on the banks of the River Jordan in the hope of fostering environmental protection and economic development in the region. Claudia Mende reports

﻿They still sometimes struggle to find the right words. The Israeli Guidon Bromberg and the Jordanian Munqeth Mehyar discuss their Peace Park project to the south of the Sea of Galilee. "Israel gave up this land in the 1994 peace treaty with Jordan," says Guidon Bromberg. "No, not 'gave up', they 'gave it back'," protests Munqeth Mehyar. "OK, gave it back," concedes Bromberg. In the environmental organization Friends of the Earth Middle East, Israelis, Jordanians, and Palestinians work together on an equal footing.

Here is where the River Jordan marks the border between Jordan and Israel. It flows 200 km south from the Sea of Galilee through the Jordan Valley and into the Dead Sea. The place where it meets its most important tributary, the Yarmouk from Syria, is marked by a small island surrounded and created by a system of man-made canals. The Jordanians call the tiny island Bakoora, while the Israelis refer to it as Naharayim.

If Bromberg and Mehyar get their way, the land between the Yarmouk, the entrance to the Naharayim Kibbutz, and all the way further south to the Gesher Kibbutz will soon bear the name Jordan River Peace Park.

The border fence can be seen from here. Because it has been a designated restricted military zone, the land has remained practically untouched for decades. Until 1948, the hydro-electric plant built by the Russian hydro engineer Pinchas Rotenberg produced electricity from both rivers for Israel and Jordan. In 1948, the Jordanian air force bombed the plant. The area has remained abandoned ever since. The former Rotenberg power plant now stands as an industrial ruin in the landscape, inhabited only by bats. In the plans drawn up by Friends of the Earth, the building will form the visitors' centre of the new park. Yet, this is all still wishful thinking. 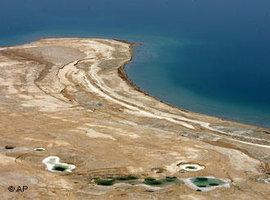 Because less water is being fed into it by the River Jordan, the water in the Dead Sea is expected to drop to a level of 430 m below sea level by the year 2020

​​For five years, the Israeli, the Jordanian, and their Palestinian colleague Nader Khatib have been hauling busloads of journalists, local politicians, tourists and representatives of the military to this abandoned grassy space on the banks of the Jordan. The environmental activists have been tireless in their attempt to convince those in authority to support their idea of a peace park on both sides of the river. To date, they have been supported with funds from USAID and the European Union.

The group sees peace, environmental protection and economic development as being intertwined. Jobs are desperately needed on the Jordanian side; in this border region near the city of Shouna Shemeiliya, around 40 per cent of the inhabitants are unemployed. It requires a large dose of imagination to see how this barren land could be transformed into a park with eco-lodges, hiking paths, bicycle paths, and a café on the hill overlooking the Jordan Valley.

Yet, Bromberg and Mehyar have such vivid imaginations and the necessary perseverance to see the project through. "We can't wait until peace arrives someday," stresses the Jordanian. "The problems faced by the environment and the people here are just too urgent."

Ecological problems know no state borders. The Jordan River serves as a lifeline to the people in the region, yet it is not only severely polluted, the volume of water flowing along its banks has also decreased by up to 98 per cent. If this continues, the Dead Sea could completely dry up within a few decades. 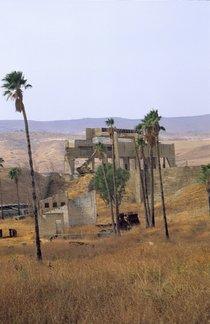 Relic of a bygone era: until it was bombed by the Jordanians in 1948, this hydro-electric power plant generated electricity from the water in the rivers Jordan and Yarmouk

​​Climate change will only intensify the shortage of water. According to forecasts on the Middle East by the World Climate Council, the volume of water could decrease by a further 20 per cent by 2050. At the same time, the wetlands surrounding the Jordan are of vital importance for some 500 million migratory birds, who twice a year make a transit stop here on their migration route between Europe and Africa. The park could attract eco-tourists from all over the world. "Environmental protection without jobs makes no sense for us," says Mehyar. "The people here need real prospects for the future."

As a result of the Israeli–Palestinian conflict, not much has happened here in decades. Even the 1994 peace treaty between Jordan and Israel has hardly altered the situation. There are two kibbutzim on the Israeli side, which are allowed to cultivate land belonging to Jordan and bring tourists here. This is made possible by a supplementary provision to the peace treaty; visitors to the area do not require visas.

These rules, however, do not apply to Jordanians. "We also want Jordanians to be able to visit the area without any formalities," says Mehyar. On this point, his Israeli colleague immediately concurs. However, there is hardly any tourism infrastructure on the Jordanian side.

Region with a rich history

The area shows the potential of the region, if only the parties to the conflict could finally agree to more cooperation. The region was once at the crossroads of trade between Europe, the Mediterranean and Asia. A derelict train station evokes the Hejaz rail line between Damascus and Haifa, which was built by German engineers. One can still see old graffiti in Hebrew and Arabic complaining about late trains.

Then there are the remains of three bridges from the Roman, Ottoman, and British eras. Friends of the Earth feels that a park facility on both sides of the river could transform the area into an attractive tourist destination. The mayors of the adjacent communities in Israel and Jordan have long since given their approval to the project.

Yet, there are still problems at government level in Jordan. The Jordanian government wants the infrastructure on the Jordanian side of the area to be built up in the first phase of the project; only then is it prepared to negotiate over the use of the territory with the two kibbutzim on the Israeli side. 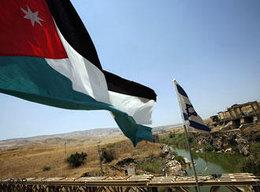 Environmental problems do not stop at national borders: the River Jordan is not only severely polluted, the volume of water flowing in it has also decreased by up to 98 per cent

​​The Jordan River used to have an annual flow of 1.3 million cubic metres of water. Today, it is expected that in future, certain sections of the river will completely dry up during the summer months. In addition, Israel, Jordan, and the Palestinian Territories discharge untreated waste water directly into the Jordan River. As most of the river's banks on both sides are inaccessible due to military restrictions, information on the frighteningly poor water quality hardly reaches the public.

A popular pastime in the Middle East, however, remains "complaining about the other fellow, instead of doing something yourself," says Bromberg. "Yet, we all know perfectly well that we have to live here together." Bromberg founded the organization in the wake of the 1994 peace treaty.

Through a process of long dialogue, its members have all agreed on political principles for their commitment to peace and the environment. They work together with everyone, not only the settlers, and demand the removal of settlements on the West Bank. When one listens to Bromberg and Mehyar, it really does sound as if the conflict between Israel and its neighbours, which has lasted for over fifty years now, could be resolved.

"We are fed up with this game that affects the lives of people," says Bromberg. He is convinced that people on all sides want to get along with each other and that only politicians have no interest in a peaceful solution. After all, the different nationalities in Friends of the Earth Middle East have succeeded in identifing common goals.

Home
Print
Newsletter
More on this topic
Friends of the Earth Middle East: Water as a Source of CooperationEnvironmental Awareness in Egypt: All the World's a Rubbish BinIslam, Environment and Sustainability: "The Environmental Crisis is also a Spiritual Crisis"
Related Topics
Democracy and civil society, Eco-Islam, Human rights, Ecology, Middle East peace process
All Topics

The rollout of coronavirus vaccines in the Middle East and North Africa is already taking place on a massive scale, with the United Arab Emirates leading the way. Nevertheless, ... END_OF_DOCUMENT_TOKEN_TO_BE_REPLACED

Faced with a deteriorating economy and a discontented populace, Jordan's ruling family is feeling the pressure. END_OF_DOCUMENT_TOKEN_TO_BE_REPLACED

Founded in 1921 as a temporary solution, Jordan managed to establish itself as one of the most stable countries in the Middle East. The inclusive and flexible approach taken by ... END_OF_DOCUMENT_TOKEN_TO_BE_REPLACED

German Middle East analyst Guido Steinberg and television journalist Ulrich Tilgner have both published new books on the conflicts in the Middle East. Their analyses and their ... END_OF_DOCUMENT_TOKEN_TO_BE_REPLACED

Jordanian author Amjad Nasser, who died in 2019, presents an impressive tale of homelands, life in exile and the hardships of returning home. His profound eloquence and use of ... END_OF_DOCUMENT_TOKEN_TO_BE_REPLACED
Author:
Claudia Mende
Date:
Mail:
Send via mail

END_OF_DOCUMENT_TOKEN_TO_BE_REPLACED
Social media
and networks
Subscribe to our
newsletter