Reviving the Rich Translation Culture of the Arab World

Under the auspices of the Abu Dhabi Institution for Culture and Tradition the "Kalima" project aims to revive the rich culture of translation in the Arab World. Muhammad Massad met up with Karim Naji, the executive president to the project

Under the auspices of the Abu Dhabi Institution for Culture and Tradition the "Kalima" project aims to revive the rich culture of translation in the Arab World. Muhammad Massad met up with Karim Nagi, the executive president to the project 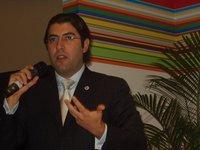 ​​What is the idea behind the Kalima Project?

Karim Nagi: "Kalima" is a non-profit translation and publishing project that plans to distribute its books throughout the Arab world through contracts with various publishing houses in many Arab countries starting with Lebanon, Egypt and Morocco. The project selects titles and subsidizes their translation and printing costs as well as its distribution.

It will not be limited to one language; we aim at establishing a data base of good translators and high-quality translated texts. The project begins with more than ten languages but we plan to start by focusing on English, German, French and Spanish.

Is the project going to be directed from the Abu Dhabi headquarters only?

Nagi: The center for "Kalima" will be Abu Dhabi though three other Arab centers have also been selected; namely, Beirut, Cairo and Rabat. The choice of Lebanon and Egypt is primarily due to their being two of the important publishing centers in the Arab world.

With regards to Morocco, there are several reasons such as the availability of a number of good translators from French and Spanish into Arabic who reside there, not to mention the country's excellent and exquisite universities and centers of learning in addition to the need to be close to the Arab Maghreb in its wider context.

Our contacts outside the Arab world will be maintained primarily through repeated visits, conferences, book fairs where we will be in direct communication with Western publishers and all those who are interested in all aspects of translating.

Which criteria have been applied to choosing the books and titles for translation?

Nagi: We have established guidelines for choosing titles such as taking into consideration the need for balance between classical and contemporary books. We also need to coordinate between areas of specialization whether the subject is literature, science, general humanities or history. There are eight categories established by the UNESCO.

We have kept the Arab reader in mind by focusing on deficiencies in Arab libraries – in fact, the selection and assignment of book titles is the first phase of the "Kalima" project.

Will the focus of rendering texts from other languages into Arabic venture into translating Arabic texts into the other direction?

Nagi: Our basic premise is that translation from Arabic into other languages is no less important that rendering other languages into Arabic. The second phase of this project, after establishing a good working relationship with the non-Arab publishers and our Arab counterparts, is to venture in the opposite direction. We would certainly like to expand and play a decisive role in translating Arabic texts into world languages.

Could you give us an idea on some of the details such as the length of the project, the committee that selects the titles?

Nagi: Administration-wise, the project is run under the auspices of the Abu Dhabi Institution for Culture and Tradition. We might succeed into transforming project into an independent one with a trustee board composed of individuals from various nations specialized in the various fields of expertise.

As for the selection of titles, this is currently placed under the rubric of a committee that works according to the UNESCO guidelines that I have mentioned before.

Although the list goes through an annual nomination process, we are taking into consideration the titles of new releases. Other details can be found in the official notice of the project that will be announced on the 21st of November in Abu Dhabi and which will also be posted on our internet site, www.kalima.ae.

The Rocky Road to Cultural Dialogue
The Arab World Has a Hard Time with Translations
Efforts were made early on to translate works from European languages, especially in Egypt, but to this day it has proved impossible to coordinate these initiatives and implement them systematically. By Khalid Al-Maaly

END_OF_DOCUMENT_TOKEN_TO_BE_REPLACED
Social media
and networks
Subscribe to our
newsletter