A Clash of Nationalisms and Religions

Violence in Muslim-dominated Kashmir and anti-India protests has recently been flaring up again. Yoginder Sikand visited the region and came to the conclusion that the decades-old conflict is based on two factors: claims of nationalism and of religion 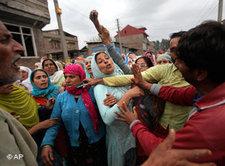 "A never-ending war": Kashmir has been rocked by widespread protests against Indian rule since June. At least 101 people have died in clashes between protesters and paramilitary forces

​​ Visitors to Kashmir are struck by the fact that the sort of endemic poverty that characterizes large parts of India is hardly visible in Kashmir – everyone has a house and at least a bit of land, and people generally look healthier and better-fed than in 'India' – and this despite the last two decades of strife that have played havoc with the local economy. Srinagar, Kashmir's capital, abounds with huge mansions, unimaginable even in the most posh parts of New Delhi.

True, there are poor people in Kashmir, but, generally speaking, poverty is no way as acute in Kashmir as it is in large parts of what the Kashmiris call 'India'.

That being the case, no amount of loans, grants and income-generation projects funded by the Government of India are likely to make much of a dent in many Kashmiri Muslims' fervent desire for independence from India or to "win the Kashmiris' hearts". Nor are dire warnings that an independent Kashmir would hardly be able to economically survive, leave alone thrive, or assurances that it is bound to hurtle into interminable economic chaos if it joins Pakistan.

If it is not for lack of jobs or out of desperate poverty that many Kashmiri Muslims continue to dream of freedom from India, then what is it that drives them in what seems to be a never-ending war against one of the mightiest armies of the world, in which, so far, they have lost more than a hundred thousand of their own?

I have reduced the whole complex Kashmir imbroglio to two basic factors: Competing narratives, claims and demands of nationalism and of religion. Nationalisms and religions are total, and can be – as is so blatantly apparent in Kashmir and India – totalitarian ideologies that brook no compromise with those, perceived as "enemies", who act as foils to construct a certain identity of the national and/or religious self. 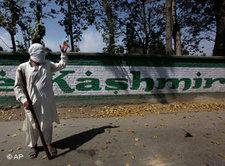 A clash of ideologies: In a dominant Kashmiri Muslim reading of history, the denizens of the Kashmir Valley are seen as having a unique cultural and ethnic identity of their own, writes Yoginder Sikand

​​ In a dominant Kashmiri Muslim reading of history, the denizens of the Kashmir Valley are seen as having a unique cultural and ethnic identity of their own, and one which demands that it be expressed in a political form – in the shape of an independent Kashmiri state.

The demand for a free state of Kashmir also grows out of a historical perception of being ruled by others for centuries: by the Mughals, the Pathans, the Sikhs, the Dogras, and now by the Indians – and, in so-called "Azad" Kashmir, by the Pakistanis.

It is also a demand based on the logic of the Partition of India that both Indian and Pakistani leaders accepted. It constantly evokes the solemn promise given to the Kashmiris by none other than India's first Prime Minister Jawaharlal Nehru that India would honour its commitment to the United Nations to allow the Kashmiris to decide their own political future – a promise that India, sixty years on, has miserably failed to abide.

On the other hand, the dominant Indian nationalist narrative has no space for a separate Kashmiri nation as a political entity. It demands that the Kashmiris must, even through force, recognize themselves as Indians and their land as an integral and indivisible part of India. The two nationalisms thus have no meeting point, and neither of them is willing to make even the slightest concession to the other.

Competing understandings of religion and religious-based identity are the other principal basis for the desire of many Kashmiri Muslims to be independent of India. This, in turn, is inextricably linked to the notion of the religious 'other' in dominant understandings of Islam. This notion can be construed in a positive, respectful way, but that has been the voice of only a small minority of Muslim eccentrics, mystics and modernists, who continue to remain on the fringe, often castigated as deviant and inauthentic. The dominant understanding of the religious "other" in Muslim thought (globally, and not just in Kashmir) is brazenly dismissive and condemnatory. 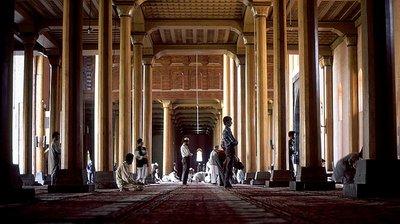 ​​ Close social interaction with non-Muslims and following their ways is frowned upon and, in many cases, sternly condemned, for this is seen as threatening to dilute the Muslims' own commitment to Islam.

Further, every instance of Indian state repression of the Kashmiri Muslims – which, as newspaper reports indicate, continues unabated – only further fortifies opposition to India and hardens exclusivist views about the Hindus, making prospects for peaceful reconciliation even more remote.

In this regard, it seems quite likely that had the Indian state taken a consistently firm line with regard to vociferously anti-Muslim Hindu chauvinist groups in India from the very outset the general Kashmiri Muslims' perception of India and the Hindus in general might not have been as adversarial as it has now become.

But, to set the balance straight, it is also true that the status of the religious 'other' in the general Hindu perception is by no means unproblematic. Over the years, I have had to suffer virulent harangues at the hands of scores of Hindus I met in Hindu-dominated Jammu, the winter capital of the state of Jammu and Kashmir, who had only the choicest swear words for Muslims. 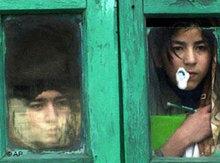 "Impure, cow-slaying demons": The problem of negative stereotypes about the religious 'other' in Kashmir is thus by no means a solely Muslim monopoly, says Sikand

​​ In the course of a study of Hindu-Muslim relations in Doda, the only district in Jammu and Kashmir where Hindus and Muslims live in almost equal numbers, I have met with numerous self-styled Hindu sadhus who, with some notable exceptions, uniformly thought of Muslims as impure, cow-slaying demons, and believed that Hindus ought to have nothing whatsoever to do with them.

Most of them were bitterly critical of local Hindus who had enjoyed cordial relations with their Muslim neighbours for centuries. The problem of negative stereotypes about the religious 'other' in Kashmir is thus by no means a solely Muslim monopoly.

An Islamic state of Kashmir

Islamist ideologues I have had the chance to meet in Kashmir insist that the conflict in Kashmir is not a political one. Rather, they argue – and here they strangely echo Hindu chauvinists – it is all about religion, or what they christen as a jihad. In an interview I did with him years ago, Syed Ali Geelani, the principal Islamist ideologue in Kashmir, one-time top leader of the Jamaat-e Islami, and the man whose word seems to have become law for the mobs protesting on Srinagar's streets today, declared that the conflict in Kashmir was one between Islam, on the one hand, and kufr or infidelity, on the other. 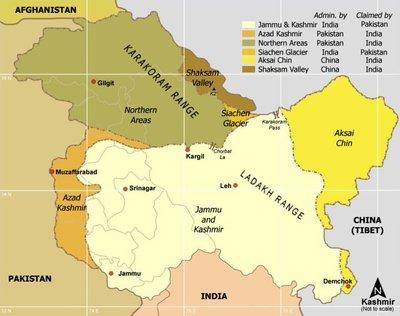 The disputed areas of the region of Kashmir. India claims the entire erstwhile princely state of Jammu and Kashmir based on an instrument of accession signed in 1947. Pakistan claims all areas of the erstwhile state except for those claimed by China. China claims the Shaksam Valley and Aksai Chin

​​ Islam, he went on, demanded that the Kashmiri Muslims continue to struggle for separation from non-Muslim-dominated India and to set up what he called an "Islamic state". When I pointed out the dismal failure of all attempts to establish such states in other parts of the world, he simply shrugged his shoulders. "They may not have been successful, but least they tried. We Kashmiri Muslims are duty-bound by our faith to try likewise," he declared.

But, what, I asked Geelani, about the non-Muslims of Jammu and Kashmir, who account for almost a half of the state's population? Surely they were not enthusiastic supporters of his "Islamic state" project? "Of course they will support us," Geelani shot back, "if we properly convince them of the beauty of such a state. In the Islamic state we hope to establish, all communities will have their rights, and all will be happy. There will be perfect justice for minorities. Not like Hindu-dominated India, where Muslims suffer so many disabilities."

When I asked the same question to the late Sadullah Tantrey, former head of the Jammu unit of the Jamaat-e Islami of Jammu and Kashmir, he retorted with what I suspected was a well-rehearsed reply: "The Islamic state that we are fighting for will prove to be a blessing for the Hindus of our state. Indeed, it will be so just that Hindus from other parts of India will pine to flock here."

The status of non-Muslim minorities

There is, needless to say, no likelihood of non-Muslims taking these pious claims at all seriously – the writings of radical Islamist ideologues, based on their particularly skewed interpretation of Islam, about the status of non-Muslims (condemned as second-class dhimmis) as well as the practice of most Muslim states, particularly those that claim to be more religiously inclined, towards their non-Muslim minorities (Saudi Arabia, Pakistan, Iran and Afghanistan under the Taliban being the most notorious in this regard), are sufficiently odious to keep non-Muslims from probing the promises of the likes of Geelani and Tantrey any further. 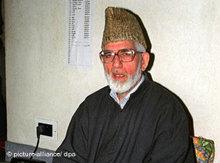 "There will be perfect justice for minorities": Syed Ali Shah Geelani, advocat of an "Islamic state" of Jammu and Kashmir

Contrary to depictions in some sections of the Indian media, it is not that the Islamist project of the likes of Geelani and the Lashkar-e Tayyeba is widely shared by most Kashmiri Muslims. Not many of them, I wager, would want Kashmir to be ruled by the likes of the Taliban or even the Jamaat-e Islami. I personally know scores of Kashmiris, practicing Muslims, who vociferously insist that the radical Islamists' version of Islam is not Islamic at all.

And so, trapped by competing narratives of nationalism and religion, the continuing violence in Kashmir is likely to persist – until, perhaps, human beings are able to devise more open and inclusive understandings of the bases of human association.