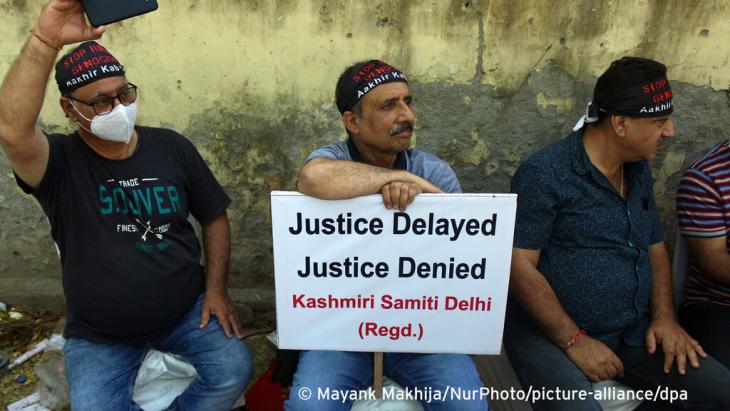 The highly controversial Indian blockbuster "The Kashmir Files“, on the exodus of Kashmiri Hindus in the 1990s, is characterised by unilateral representations, negative stereotypes and historical inaccuracies. By Dominik Muller

Indian Prime Minister Narendra Modi went out of his way to praise and defend the film against criticism, which he described as part of a "conspiracy to discredit". Director Vivek Agnihotri conducted a publicity tour of England, The Netherlands and Germany during May and June.

"If you don’t leave this place, we’ll burn your houses down," are the threatening words of a bearded Muslim in a mosque raging against the Hindu minority in Kashmir. "Convert, leave or die," the man continues. The faithful cheer him on, erupting in loud jubilation.

This is a scene from the contentious new film "The Kashmir Files" by Indian filmmaker Vivek Agnihotri. Both the film and its director are equally controversial. Agnihotri describes critical intellectuals as "enemies of the state" who – just like a female university professor in the film – are effectively siding with terrorists.

The film focuses on the history of Kashmir, the flashpoint region between the two nuclear powers India and Pakistan. An armed uprising began in this majority-Muslim valley in the late 1980s in response to the Indian government’s refusal to accept the results of an election there. A few years later, militant Islamists targeted the Kashmiri Hindu minority – most of them members of the high-ranking caste of Pandits. Many were killed, several thousand fled, most never returned. 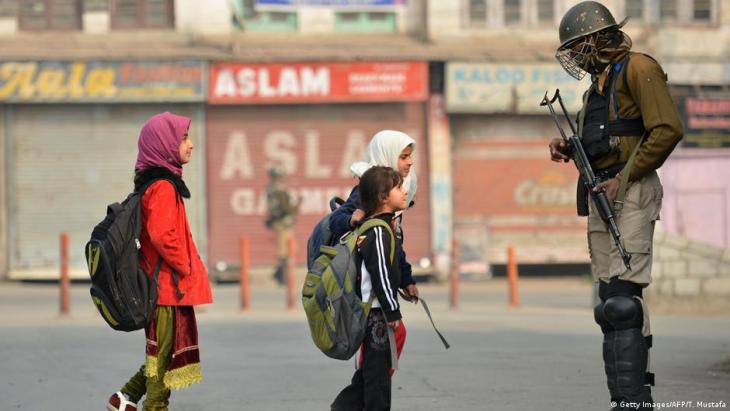 Life in a state of emergency: numerous reports by human rights organisations have documented sexualised violence, torture and extrajudicial killings by Indian security forces. In 2018 for the first time, the United Nations High Commissioner for Human Rights published a highly critical report on the catastrophic situation in Kashmir. The army continues to deny the allegations. Relations were further strained when the Modi government revoked the temporary autonomy of Kashmir granted by the Indian constitution. What was already a massive military presence was beefed up even more, local politicians were detained or put under house arrest, ties to the outside world were curtailed and Internet access barred

Blockbuster of the year in India – controversial in Europe

India’s central government deployed the army, assigning it far-reaching powers to arrest and interrogate suspect individuals. Since then, numerous reports by human rights organisations have documented sexualised violence, torture and extrajudicial killings by Indian security forces. In 2018 for the first time, the United Nations High Commissioner for Human Rights published a highly critical report on the catastrophic situation in Kashmir. The army continues to deny the allegations.

Relations were further strained when the Modi government revoked the temporary autonomy of Kashmir granted by the Indian constitution. What was already a massive military presence was beefed up even more, local politicians were detained or put under house arrest, ties to the outside world were curtailed and Internet access barred.

In interview with The New Yorker in June, filmmaker Vivek Agnihotri claimed that not a single alleged human rights violation by Indian security forces had been proven. In the film too, which doesn’t otherwise hold back on brutal scenes, panders to negative stereotypes and portrays all Muslims as terrorists, they therefore don’t feature at all. In scenes from the film set in the present day, Kashmiri characters praise Modi’s Hindu nationalist BJP for revoking the region’s constitutional autonomy. In reality, the move was criticised by many high-ranking Kashmiris and international human rights organisations.

In India, the film has turned out to be the biggest hit of the year. In Europe, the director presented his propaganda movie in England, The Netherlands and Germany in May and June. His message, and that of the film: after speaking to hundreds of affected Kashmiri Pandits, he wanted to finally tell the truth. "I believe terrorism is the greatest enemy of humanity, that’s why I decided to make a film about the surviving victims of the genocide in Kashmir," said Agnihotri in an interview with CNN. In conversation with The New Yorker magazine, he even compared his film to Steven Spielberg’s “Schindler’s List“ and drew parallels between the displacement of the Pandits and the Holocaust.

Kashmiri Pandits have taken to various media to contradict the film’s one-sided portrayals and convey their own recollections. A report by France 24 heard from Sanjay Kaw, who fled Kashmir in the 1990s at the age of 22. Only a minority of Muslims in Kashmir felt any hostility towards the Pandits and threatened them, he said. Umesh Talashi, a Kashmiri Pandit who is today a member of the Jammu Kashmir National Conference political party, was six years old when the uprising started. Interviewed about the film by CNN, he said sympathetic Kashmiri Muslims helped to hide his father from Islamist fighters during the rebellion.

And there’s more than just anecdotal evidence, says Nitasha Kaul, a Kashmiri novelist and professor of politics and international relations at the University of Westminster. "The Kashmir Files" is rewriting history, ignoring political and geographical associations and blaming Muslims alone for the conflicts, says the professor. The film ignores examples of solidarity between both religious groups explored in academic studies, and also fails to recognise the violence perpetrated by militant groups against moderate Muslims, she continues.

Prime Minister Narendra Modi, who often struggles to denounce the frequent violent attacks on members of the Muslim minority in India, has like many of his party colleagues heaped praise on the film and dismissed criticism. Several BJP-run states have declared “The Kashmir Files” tax-free and in the state of Madhya Pradesh, police were even given an extra day’s holiday to watch the film.

For university professor Kaul, the film is “profoundly Islamophobic”. The BJP is using it to further its political goals, she says. A fear that’s also shared by Indian film critics. The reporter for “The Hindu” present at the film premiere wrote: “There are fears that excerpts of the film will soon end up on social media to stoke hatred.” Screenings in India have also been followed by Islamophobic demonstrations calling for a boycott of Muslim businesses, among other things.

Agnihotri named his series of talks and screenings in Europe from 28 May to 26 June the "Humanity Tour“. On Twitter, he listed some of the places where he aimed to present the film: among them the Nehru Centre London, the University of Oxford, the Saalbau in Frankfurt and the Babylon cinema and Jewish Museum in Berlin. Generally, tickets were not made available for purchase; access to screenings was by invitation only.

In early June, the tour hit the headlines in India when the Oxford Union student debating society “rescheduled” the film’s screening at the British university until 1 July. Agnihotri then posted a video threatening to sue the society, because the summer holidays would be starting on 1 July and no student would be present. He described the move as “Hindu-phobic” and the society president as a “Pakistani”.

As it turned out, it wasn’t the only de facto cancellation. "As far as we’re concerned, there are no plans to hold an event with Mr. Agnihotri, and we are not aware of any official visit to the museum,” was the Jewish Museum’s response to Agnihotri’s announcement. But at other screenings however, the auditoriums were full: a number of Scottish and English parliamentarians from various parties even described the film in video clips by Agnihotri as an "important document“ and spoke of a "genocide“ of Kashmiri Pandits.

Prominent Indian critics, on the other hand, regard the film as a piece of pure propaganda, and some are even comparing Agnihotri with Leni Riefenstahl, a German actress and film director who produced propaganda for the Nazis. Agnihotri rejects the allegations: "How can a film about terrorism be propaganda?” That the film is fanning tensions between Hindus and Muslims is a mere assertion and “agenda-driven”, Agnihotri told CNN.

Since Ali Khamenei, Iran's most powerful man, has openly and unconditionally come out in support of Putin's war in Ukraine, logistical help is on its way, with an allegedly ... END_OF_DOCUMENT_TOKEN_TO_BE_REPLACED

Tourists have been returning to Tunisia, Egypt and Morocco. But, given the global uncertainty caused by the Ukraine war, will the comeback be enough to save a struggling sector, ... END_OF_DOCUMENT_TOKEN_TO_BE_REPLACED

"Flugt" is the world's first museum dedicated to the stories of those forced to flee. The new museum, which focuses on the fates of refugees then and now, is housed in a former ... END_OF_DOCUMENT_TOKEN_TO_BE_REPLACED

"Finding Home", the second album by Syrian-born, UK-based musician Maya Youssef, works through feelings of loss and destruction until its music reaches a place beyond war and ... END_OF_DOCUMENT_TOKEN_TO_BE_REPLACED
Author:
Dominik Müller
Date:
Mail:
Send via mail

END_OF_DOCUMENT_TOKEN_TO_BE_REPLACED
Social media
and networks
Subscribe to our
newsletter