This type of whitewash is not limited to the Khashoggi case; it is even harder to find serious criticism in mainstream Arab media of the Saudi-led war in Yemen. With tens of thousands dead and a devastating famine threatening to kill millions more, the regionʹs news outlets are virtually silent on the role of the Kingdomʹs interventionist crown prince, Mohammed bin Salman.

If the international community genuinely cares about defending human rights, the rule of law and democratic values, it must denounce Saudi Arabiaʹs brutality. 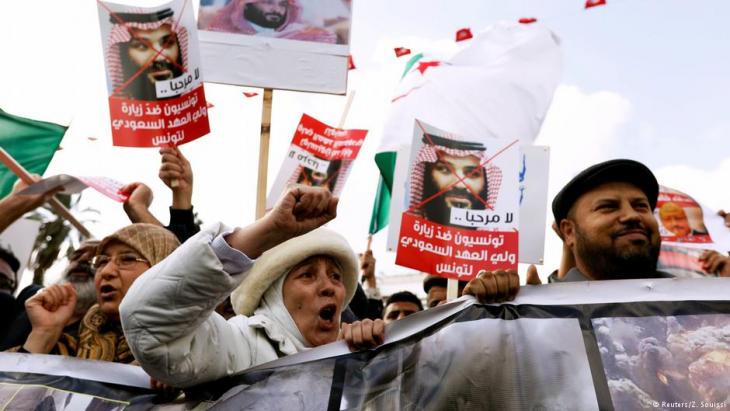 As Mohammed bin Salman toured the Middle East in the run-up to the G20 summit in Argentina, it was impossible to overlook the strength of popular outrage at the summary execution of Khashoggi – as here in Tunisia. As Leon Willems writes, "It is not only the loss of a journalistʹs life that needs to be mourned, but also the erosion of civil liberties and free speech"

One of the Middle Eastʹs most powerful countries is directly responsible for widespread death, destruction and misery. And yet Western countries are not only condoning these activities; in some cases, they are actively facilitating them by supplying the weapons.

Whose interests are really served when Saudi Arabia is a strategic ally of the West? It is certainly not the marginalised people of Yemen, Bahrain and Syria. Nor is it anyone concerned with human rights, gender equality and many other values Western leaders claim to uphold.

Khashoggiʹs death must not be in vain

It is impossible to overemphasise the importance of journalists like Khashoggi to a country like Saudi Arabia. Without these purveyors of truth, institutional and political corruption would never be challenged.

That is why Saudi officialsʹ extrajudicial killing of a journalist overseas must not go unpunished; governments must urgently reconsider their alliance with the Kingdom. Simply condemning human rights violations without applying meaningful sanctions will not change its behaviour.

Beyond that, the international community must stop delegating the responsibility to investigate and prosecute the murder of journalists to the governments that wanted them dead. In most instances, the rule of law is too weak and the very people in charge are those who ordered the executions.

Justice may never be served in Khashoggiʹs case, but his murder must not be in vain. Governments that value transparency and free speech must work together to create an international tribunal to prosecute cases of slain journalists in countries unable or unwilling to do so themselves.

The alternative – allowing impunity to prevail – will let criminals off the hook and erode the very values that journalism is meant to defend.

Lebanon's economy is imploding and with it social stability. While the country’s politicians understand the depth of the crisis, they have used the coronavirus lockdown, argues ... END_OF_DOCUMENT_TOKEN_TO_BE_REPLACED

Despite his main focus being on his childhood and youth, spent between East and West, Riad Sattouf also describes the current state of the Arab world in his much-lauded graphic ... END_OF_DOCUMENT_TOKEN_TO_BE_REPLACED

Germany and other member states of the European Union are for the first time making use of the so-called INSTEX mechanism to circumvent the sanctions imposed on Iran by the United ... END_OF_DOCUMENT_TOKEN_TO_BE_REPLACED

Libyan political analyst Faraj Alasha argues that the Berlin conference on the Libyan war did nothing to change the fact that there is no political solution to end the war raging ... END_OF_DOCUMENT_TOKEN_TO_BE_REPLACED

Decades after the first French nuclear test in Algeria, thousands of victims are still waiting for compensation. To date only 51 claims have been filed under French legislation ... END_OF_DOCUMENT_TOKEN_TO_BE_REPLACED

The 2015 Joint Comprehensive Plan of Action with Iran is in jeopardy. European governments should use the JCPOA’s dispute-resolution mechanism both to pursue immediate measures to ... END_OF_DOCUMENT_TOKEN_TO_BE_REPLACED
Author:
Leon Willems
Date:
Mail:
Send via mail

END_OF_DOCUMENT_TOKEN_TO_BE_REPLACED
Social media
and networks
Subscribe to our
newsletter