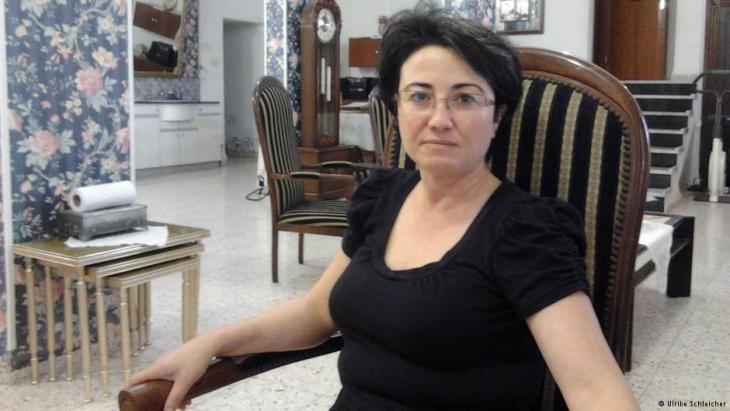 Loathed, reviled ... and excluded from parliament

Haneen Zoabi is a tireless defendent of human rights for Palestinians in Israel and the occupied territories. Never afraid to voice harsh criticism, she constantly challenges state and society in Israel. Ulrike Schleicher met the outspoken Israeli politician in Jerusalem

Haneen Zoabi regularly hits the headlines, usually as a result of her provocative and highly contentious statements. Herself of Palestinian origin, she has represented the Arab Balad party in the Israeli parliament, the Knesset, since 2009. She has been a very public figure ever since.

Statements such as "Israel is anti-democratic and racist" in conjunction with the occupation of the West Bank and the Palestinian minority in Israel present a challenge to both state and society. In doing so, the 45-year-old is well aware of the danger of marginalising herself, but she is willing to take that risk.

There is probably no more contentious politician in Israel at the moment. Zoabi is often the target of hateful vitriol and has received a number of death threats. According to a recent survey, 89 per cent of Jewish Israelis are in favour of withdrawing her citizenship. She has been defamed as a "traitor" and a "terrorist" in social media and by Knesset members.

Foreign Minister Avigdor Lieberman from the ultra-right Beitenu party would like to see her behind bars. She has made enemies across the entire political spectrum, including on the left. Labour Party MK Itzik Shmuli, for instance, recently commented that Zoabi launched nothing but "cheap provocation" and was a "fundamental Israel-hater".

Zoabi, who was born in Nazareth in the north of the country, is adamant that she does not hate Israel, but adds that she can't identify with a state she characterises as racist. Israel's 1.2 million Palestinians are excluded, she says, and their values, history and culture rejected by mainstream society.

What's more, she adds, a number of Israel's laws highlight the discrimination against Palestinians. Take a law on family reunification, for example: if an Israeli marries a Palestinian from the occupied territories, the partner receives only a temporary resident's permit, which has to be renewed on a regular basis and is frequently denied, she says. 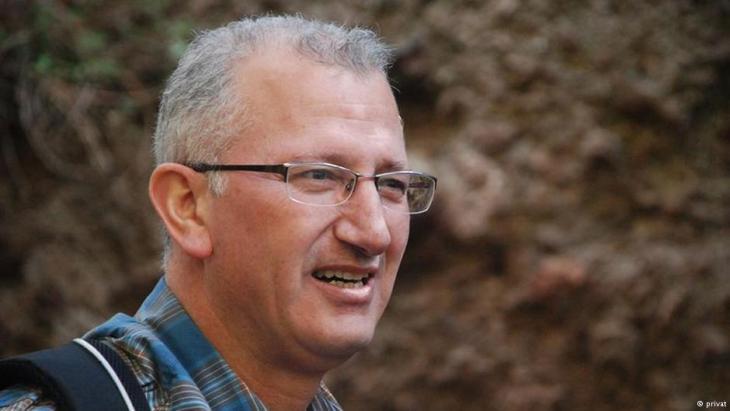 At the end of October, Haneen Zoabi was excluded from the Knesset for six months for an interview she gave regarding the abduction of three young Israelis earlier this year. This decision came as no surprise to the Tel Aviv-based political scientist Amal Jamal: "She provokes the conservative right-wing parties and men in particular." In his opinion, the penalty is absolutely inappropriate and harms not only Haneen Zoabi's person, but – much more significantly – the "entire Israeli legal system"

She also describes the distribution of land as discriminatory. Palestinians who fled or were driven out were expropriated by law after the foundation of Israel in 1948, says Zoabi; their land went to the new state and has since been given almost exclusively to Jews. Building a house, renting fields, setting up a business are almost impossible under these conditions, she says. Zoabi also claims that the Palestinians are disadvantaged in terms of education because significantly fewer of them are granted university places.

Israel's President Reuven Rivlin, a member of the ruling conservative Likud party, recently admitted that the country's Arab minority is treated unfairly in many respects: "We simply have to admit that the Arab population in Israel has suffered from years of discrimination with regard to state financial aid, education, the infrastructure of their towns and the development of trade and industry."

One state for Jewish and Arab Israelis

Haneen Zoabi and her Balad party call for Jews and Arabs to live side by side in Israel with equal rights. That, she says, is democracy. Because of that goal, says Zoabi, she is labelled a terrorist. She feels that if she were happy with Jews having more rights, the state would not see her as a threat.

Hillel Cohen, a lecturer at the Hebrew University in Jerusalem and an expert on Jewish-Palestinian relations, takes a similar view. Although Israel is democratic in many respects, he says, it has difficulties with relation to its internal Palestinian minority, particularly when that minority demands its rights. Instead of being loyal, as many expect her to be, Zoabi holds up a mirror to the Israelis, he says. "That's simply hard to cope with."

By the same token, it is hard to motivate the approximately 1.2 million Palestinians living in the country to play an active role in society and state. Many are frustrated, says not only Zoabi but also Amal Jamal, a professor of Political Science at Tel Aviv University. More and more people are refusing to vote, he says, which he considers not only wrong but also potentially dangerous. "People look for other channels instead," explains Jamal, such as violence – which, he says, is just what right-wing politicians like Foreign Minister Lieberman are waiting for as a justification for their restrictions.

According to Professor Jamal, Haneen Zoabi has many supporters within Arab society, and the number of her female supporters is growing. People appreciate the way she raises her voice with such courage, he says. Having said that, not everyone is a fan. "Her lack of sensitivity is often criticised and some would prefer it if she wasn't in the public eye so often." On the other hand, he points out, journalists are now practically lying in wait for Zoabi's next headline-worthy statement. 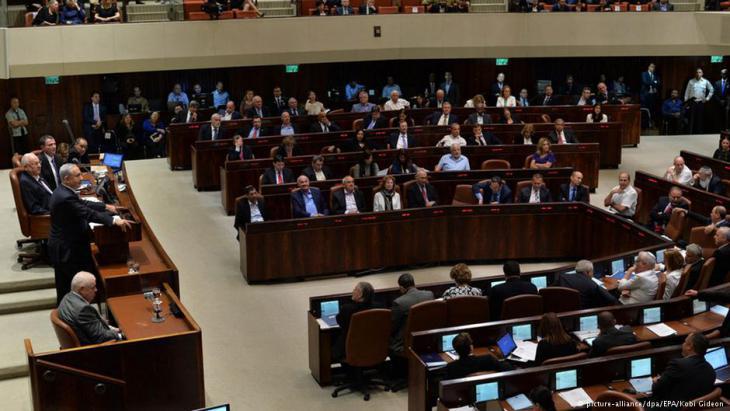 A large majority of Knesset members voted in favour of Zoabi's suspension: out of the chamber's 120 parliamentarians, only 16 from Arab and left-wing parties voted against the penalty. Zoabi criticised her suspension as "unprecedented, vindictive and out of proportion"

One of these headlines had far-reaching consequences. At the end of October, Zoabi was excluded from the Knesset for six months. During this period, she is not allowed to cast her vote, make speeches or provoke political debates. This was the first time that this maximum penalty was imposed by the parliamentary ethics commission and confirmed by a large minority of Knesset members.

The reason: Haneen Zoabi is accused of having violated the Knesset's code of ethics. The occasion was a radio interview last June in which she allegedly expressed understanding for the abduction of three Jewish teenagers in the occupied West Bank. The kidnappers, Zoabi said in the interview, were not terrorists. The three school students were later found murdered.

The interview prompted a storm of indignation in Israel. The situation was compounded by the fact that most Israeli media failed to mention that Zoabi had also condemned the crime. It also went unmentioned that her statements were made outside of parliament, meaning the Knesset commission is not authorised to react to them.

It comes as no surprise to Professor Jamal that Zoabi received such a tough punishment from her fellow Knesset members. "She provokes the conservative right-wing parties and men in particular." In his opinion, the penalty is absolutely inappropriate and harms not only Haneen Zoabi's person, but – much more significantly – the "entire Israeli legal system".

Haneen Zoabi too sees it as her task to prove that. She intends to contest her suspension from parliament before the courts. Her argument: the penalty has no basis in law and is politically motivated. The judges have yet to decide on the case. 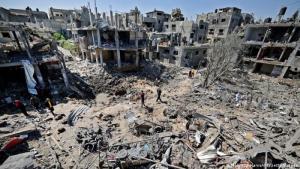 Israel and Gaza are at war again. That may be nothing new, but it really wasn’t meant to happen this time, writes Neri Silber for Newlines END_OF_DOCUMENT_TOKEN_TO_BE_REPLACED 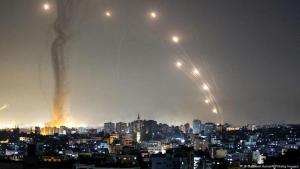 A local row triggered by ultra-right wing Jewish settlers trying to secure the forced expulsion of Palestinian families in East Jerusalem has re-ignited hostilities in the Middle ... END_OF_DOCUMENT_TOKEN_TO_BE_REPLACED

Once a supporter of a two-state solution to the Israeli-Palestinian conflict, Ian S. Lustick now deems that goal a deceptively Solomonic, and often disingenuous, approach to ... END_OF_DOCUMENT_TOKEN_TO_BE_REPLACED

Renewed protests and violent clashes with Israeli security forces at the weekend have prompted the court hearing scheduled for 10 May to be postponed. Yet it remains unclear what ... END_OF_DOCUMENT_TOKEN_TO_BE_REPLACED

Isabella Hammad’s "The Parisian" is an engaging and accomplished debut based on the life of her great-grandfather. Set during the end of the Ottoman Empire and the rise of ... END_OF_DOCUMENT_TOKEN_TO_BE_REPLACED

END_OF_DOCUMENT_TOKEN_TO_BE_REPLACED
Social media
and networks
Subscribe to our
newsletter