The Kolbars of Iran's Kurdistan

Hundreds of porters, locally known as ‘kolbars’, cross the mountainous border between Iran and Iraqi Kurdistan all year round. With Iran’s economic crisis deepening, ever more Kurds are choosing this poorly paid and extremely dangerous job as the only way to make a living and provide for their families. Images and text by Konstantin Novakovic 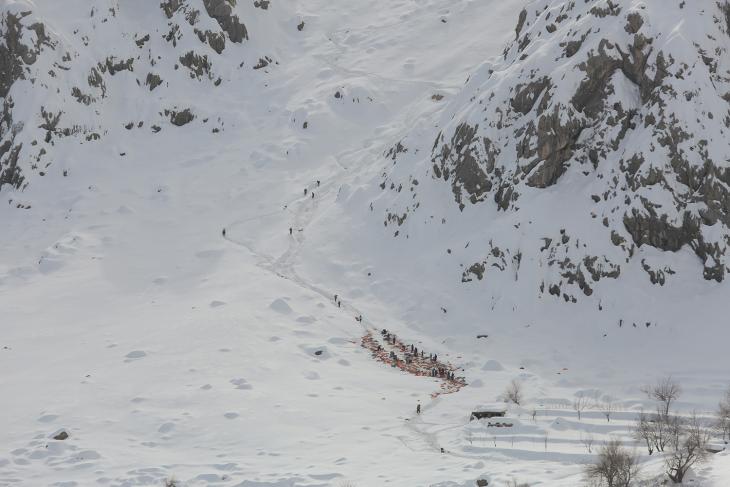 The kolbar route on the snow-covered slope of Kuh-e Takht mountain is clearly visible from the road connecting the border town Marivan and nearby village Hawraman Takht, many of whose male inhabitants are locked into this perilous occupation. Numerous other smuggling routes can be found along the Kurdish-populated section of Iran’s 1500km long border with Iraq 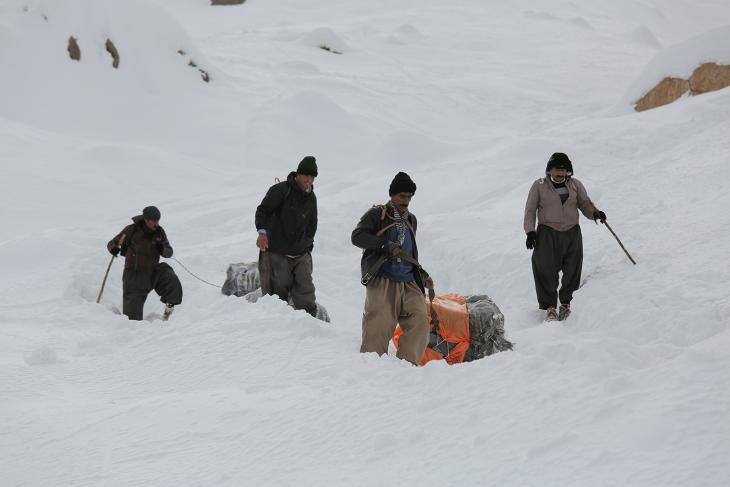 Having crossed the high mountain passes in sub-zero temperatures, a group of kolbars descend the steep slope, guiding their loads through the snow. A trip across the border takes between 8 and 12 hours and is especially difficult during winter, when the treacherous conditions result in many accidents 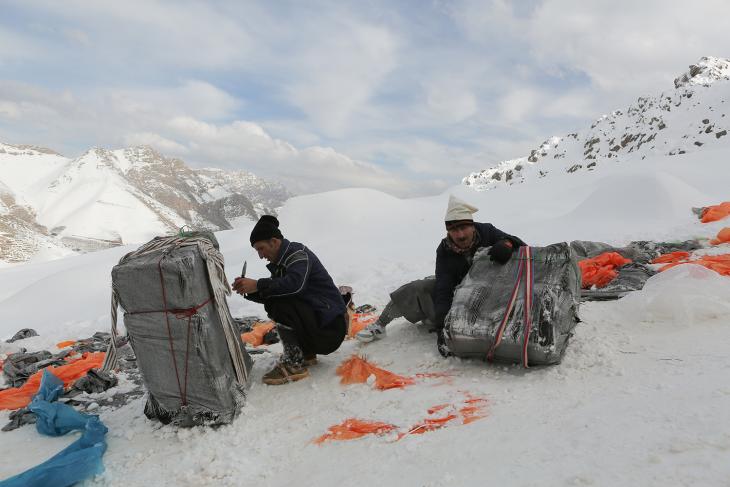 A typical load varies between 40 and 90 kg, depending on the type of goods and the physical condition of the porter. The contraband being smuggled from Iraqi Kurdistan into Iran ranges from consumer electronics and clothes to cigarettes and alcoholic drinks, the latter being illegal in Iran. The Kolbars, Kurdish for porters, are unique to Iranian Kurdistan 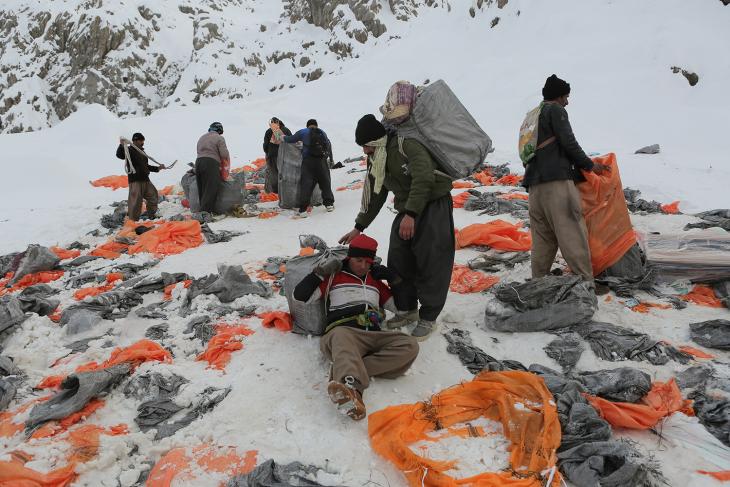 Once the loads reach the bottom of the mountain slope, it is time to shoulder them again. The packs are generally so heavy that kolbars need help to put them on their backs. Grinding poverty and soaring unemployment in the Kurdish provinces of Iran – sometimes up to 50% – means boys and men ranging in age from 13 to 80 years have no alternative but to engage in such work 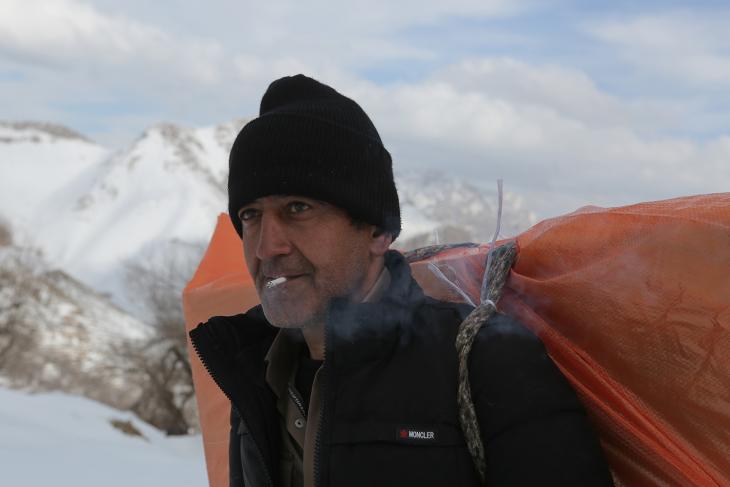 After a short cigarette break, a fully laden porter sets out on the final leg of the journey. Exposure to the mercy of the elements is not the only risk for kolbars, who are regularly monitored and frequently shot at by Iranian border patrol officers 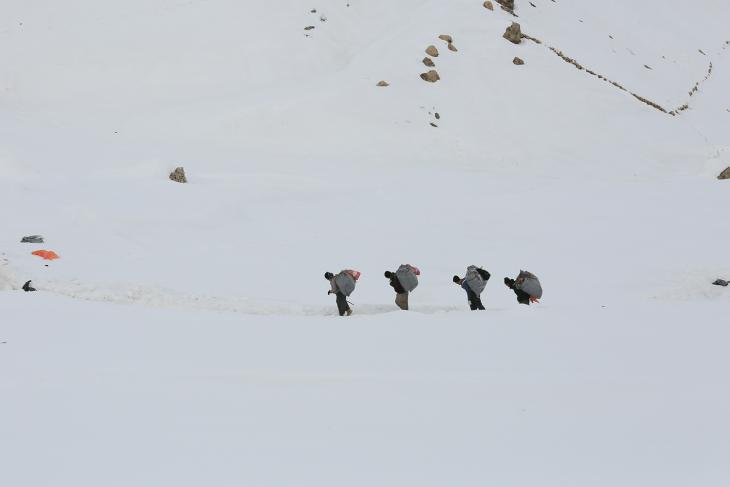 A column of kolbars breaks through the snow and walks slowly towards their final destination. According to the statistics, some several hundred porters die each year. Seventy percent are killed by the Islamic Revolutionary Guard Corps, which controls the border with Iraq. In recent years, violence against the kolbars has been steadily increasing 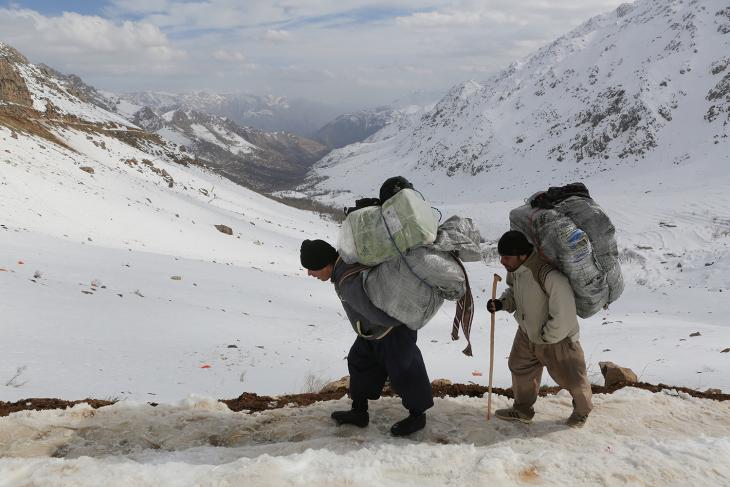 It is estimated that several thousand men local to the border regions of Rojhelat provide for their families as kolbars. In an area where families remain large, several hundred thousand people are dependent on this type of cross-border labour, while many more are involved in distributing the contraband to other parts of Iran 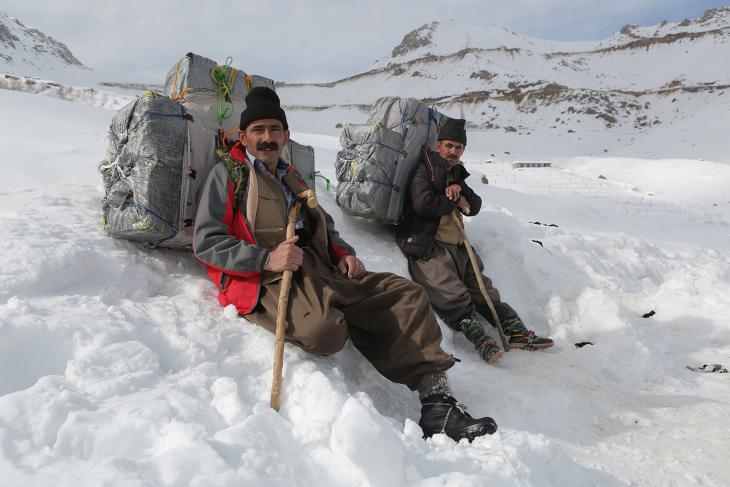 Kolbars cross the rugged snow-covered mountains dressed in their usual clothes, the only ones they can afford. Owing to Iran’s ongoing economic crisis and strict sanctions imposed by the United States, the number of people working as porters is on the rise 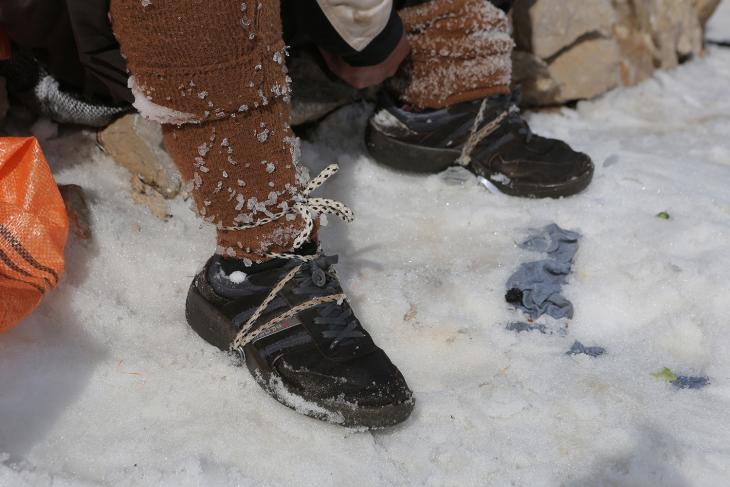 Improvised crampons are all the kolbars have to help them cross the mountains during the winter. Rope is used to attach the crampons to their shoes 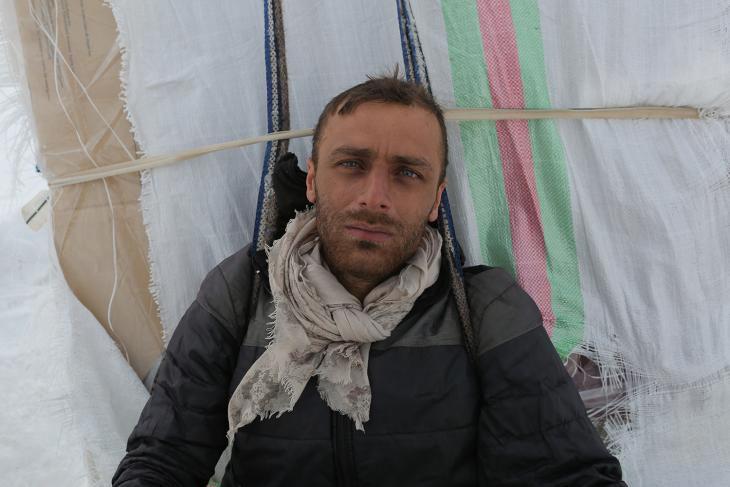 One man in his twenties from a nearby village recently decided to work as a porter. Although he holds a master’s degree from the local university, he has been unable to find a job. Currently, working as a kolbar is his only option 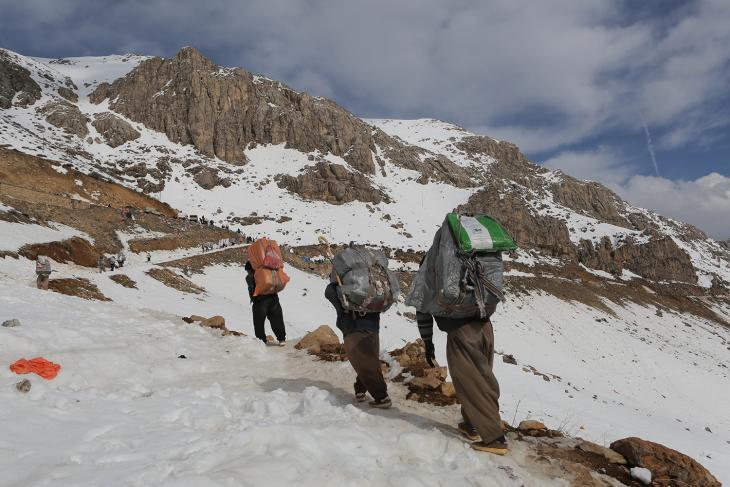 A caravan of exhausted porters approaches the local road where they will deposit their goods. The market in smuggled goods sprang up with the creation of the Kurdistan region in neighbouring Iraq in 1992 and flourished in the late 1990s 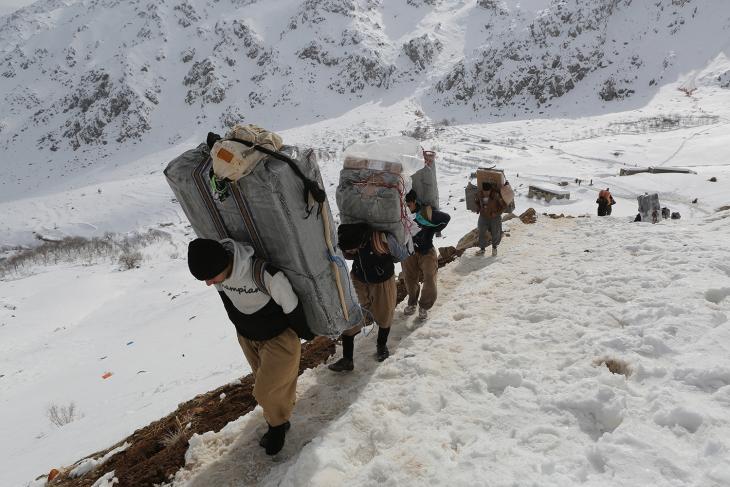 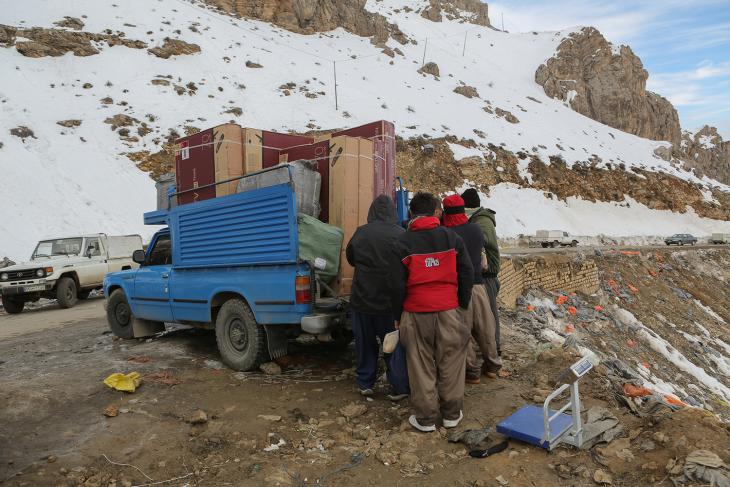 Upon reaching the local road between Marivan and Hawraman Takht, the kolbars relinquish their loads in exchange for money. Depending on the weight of their load, they earn between 20 and 40 U.S. dollars 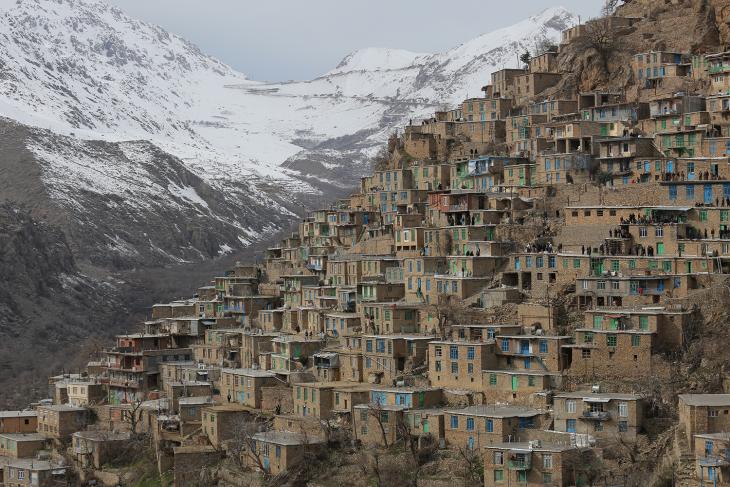 View of Hawraman Takht, a historic village featuring the terraced stone houses traditional to the region. Last year, in recognition of its distinctive architecture and landscape, this ancient village was added to the UNESCO World Heritage List. Besides the exceptional potential for tourism, smuggling is still the only way to survive for many in this impoverished region

END_OF_DOCUMENT_TOKEN_TO_BE_REPLACED
Social media
and networks
Subscribe to our
newsletter