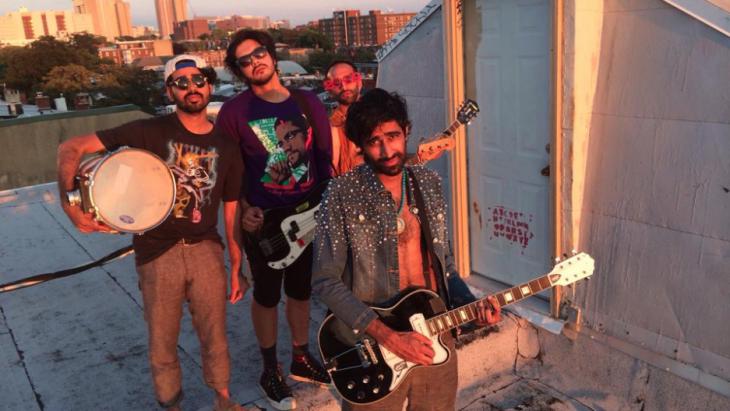 Since setting up their band, The Kominas have come under fire from all sides: some punks say they aren't real punks, while conservatives are critical of their politics. But who decides what punk is anyway? Isn't the very essence of punk to push boundaries and upset the status quo? According to Richard Marcus, despite feeling ostracised by the white indie/punk scene and being the focus of media articles for reasons completely outside their control, the Kominas just keep on speaking their minds and making great music

Like any other creed, punk rock is widely open to personal interpretation. British punk of the 1970s was wildly different from American punk of the same period; New York punk was different from California punk, while Toronto's punk scene was a sort of mash-up of all three. After nearly 40 years of listening to punk, the only generalisation I'm willing to make on the subject is that it's more of an attitude than a style of music. Punk is a willingness to speak your mind and live with the consequences; it's about taking chances and not accepting the status quo.

So using a catch-all phrase like "punk Islam" or Taqwacore (a name derived from the book of the same name by American author Michael Muhammad Knight) won't give you an idea of a band's nature, save that the members might share the same religious background. While using this term also seems to be fairly insulting (after all, how many "Christian punk" or "white punk" bands do you know of?), that hasn't stopped the labelling from happening.

This is part of an overall syndrome that the band The Kominas was railing against in a recent post on their Facebook page: "There's a lot of publicity that comes with Muslims performing normalcy for the West. 'Oh wow, look at these Muslims who skateboard and are totally average,' 'hey, look at these Muslims who listen to & make music,' 'wow, this Muslim is just a normal shithead (just like me!)'. You can call it whatever you want (we would say tatti, but it's your choice), we just wanted to say fuck that. We are more than a label. Fuck your binaries. Fuck all of them, fuck American:Muslim, Male:Female, white:other..." (Kominas Facebook page, 13 June 2015)

The Kominas have been associated with Taqwacore through both their association with Knight and with a documentary movie they were featured in, Taqwacore: The Birth of Punk Islam. The movie was split between documenting "Islamic" punk bands touring together with Knight on an old school bus around America and a trip by Knight to Pakistan where he visited various Sufi shrines, the madrassa he had attended and the Kominas, who were in the midst of a two year sojourn in the country.

This was when I first ran into the band and over the years, I've stumbled across them on the Internet and been impressed by their music and what they have to say about it: why they perform and what punk means to them. Founding members Basim Usmani (bass) and Shahjehan Khan (guitar) started the band in 2005 when they met up at university in Boston. Karna Ray soon joined as drummer, and over the years, the rest of the band's membership has shifted and evolved to where the original trio is now, augmented by Hassin Ali Malik.

While they have only released a couple of full-length CDs (Kominas and Wild Nights In Guantanamo Bay), a couple of singles ("BariyaN Ashiq Mizaj AkhaN TeriaN" and "Sharia Law in the U.S.A.") and a six-song CD (Escape To Blackout Beach), they have garnered a great deal of attention. Some of it has obviously been from American media trying to get their heads around the fact young Muslims are in a popular music band, but mostly it is because of their appeal to people both in America and in South-East Asia. With songs written in English, Urdu and Punjabi, they can cross cultural boundaries few American-based groups even know exist.

However, that doesn't mean they are universally popular. In fact, they come under fire from all ends of the political, musical and religious spectrum. In an interview given to Vanyaland, a Boston-based music magazine, Usmani touches on this when he mentions how they get flak from anti-religion Pakistani punks for being identified as Muslim and from Indonesian punks who say they aren't real Muslim punks.

Of course, their politics – and maybe their existence – also upset conservatives of all types (political, religious and musical) at home. As evident from the quote above, they have strong opinions, which they don't hesitate to express. However, that's what a punk band is supposed to do – upset the status quo. Sure, there are punks out there who claim The Kominas aren't punk enough because they play more than three chords and experiment with different styles and genres of music, but their approach to music and their lyrical content is pure punk. As definitive a figure as John Lydon (Johnny Rotten of the Sex Pistols) has said the whole idea of a punk orthodoxy – that you can only listen to or play certain types of music to be punk – is ridiculous.

Can a Muslim be a punk?

Unfortunately there's also the issue of colour: brown-skinned people from South-East Asia aren't supposed to thrash about on stage with guitars and drums and their hair spiked up in Mohawks. They're supposed to play sitars and other ethnic instruments. In an interview on the MTV website given earlier this year, Malik responded to a question about how being Muslim has impacted on the way the music community has treated them by saying he felt they were ostracised by the white indie/punk scene – as much as that scene even exists anymore.

The hardest thing for The Kominas is being treated like any other band. In reply to the same question above, Usmani said the press only seems to be interested in them when Islamophobia is in the news or as a token for an article about assimilation. Yes, they began life as a supposed Muslim punk band, (drummer Ray is a secular Hindu born in the States to academic parents) but they're more than that. Not only are they breaking down stereotypes by playing music people of colour aren't "supposed" to play, they are playing really good music.

The irony of an article like this one, of course, is that it only perpetuates the problem of them being treated like any other band. However, hopefully the release of their new album, Stereotype, later this year will garner them the attention they deserve as a band, not just as the Islamic punks from Boston. True to their punk natures, it will be released on their own label – most likely as a digital download from their website. Wherever you are, and whoever you are, make sure to grab a copy.

Home
Print
Newsletter
More on this topic
Michael Muhammad Knight's novel ''Taqwacore'': Provocation as a way of lifeAnti-Muslim sentiment in Canada and the US: Playing on people's fearsMuslim youth in America: The "mipster" phenomenonInterview with Michael Muhammad Knight: ''Religious laws can change''Muslims in America: New wave of anti-Islamic sentiment
Related Topics
Islam and the West, Islamic lifestyle, Islamophobia, Musical worlds, Muslims in the West
All Topics

Calls for a free Kashmir are becoming louder on both sides of the divided region. Can the German reunification model be applied to the India- and Pakistan-ruled Kashmirs? And what ... END_OF_DOCUMENT_TOKEN_TO_BE_REPLACED

Indiaʹs constitution prohibits discrimination on the basis of religion, but the government of Prime Minister Narendra Modi does not care. Run by Hindu-supremacists, it is ... END_OF_DOCUMENT_TOKEN_TO_BE_REPLACED

Using a combination of poetry and narrative, Pakistani poet Yusra Amjad talks about her compatriots' perception of the institution of marriage. END_OF_DOCUMENT_TOKEN_TO_BE_REPLACED

Abu Dhabi and Riyadh see a natural partnership with Modi’s government, a co-operation that could change the dynamics of the South Asian-Gulf nexus. By Jean-Loup Samaan END_OF_DOCUMENT_TOKEN_TO_BE_REPLACED

To many the name of Pakistan calls up images of Islamic extremism, religious intolerance, state corruption and the long years of terror. It’s probably safe to say that single malt ... END_OF_DOCUMENT_TOKEN_TO_BE_REPLACED