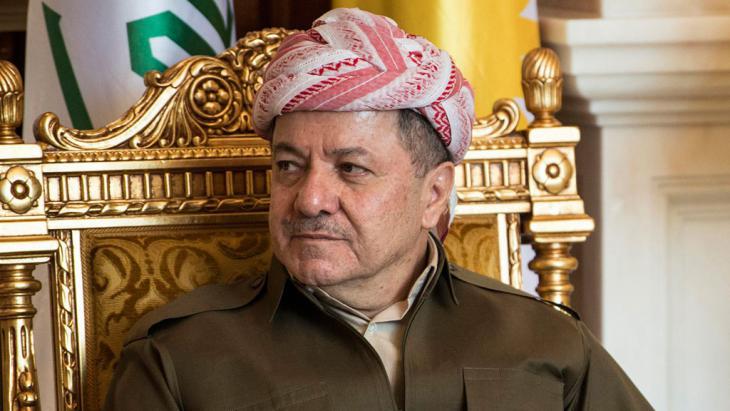 The Kurdish conflict
Barzani in a tight spot

Massoud Barzani, president of the Kurdistan Region in Iraq, wants rid of the PKK. Demanding that the group leaves the Qandil Mountains is a politically calculated move. But the Iraqi Kurds are not united in this view: another leading Iraqi Kurd politician and former Iraqi president, Jalal Talabani, wants the PKK to stay. An analysis by Birgit Svensson in Erbil

The Qandil Mountains on the eastern edge of the Kurdish autonomous region of northern Iraq are up to 3,000 metres high and extremely steep. Narrow roads snake up the slopes. "We're five hours from the Iranian border and one hour from Rania – on foot, of course!" says Hamsa, explaining our location.

Something that the Kurdish regional government in Erbil did not want to admit for a long time has now been official for more than two years: the Turkish-Kurdish guerrilla organisation PKK is based in the Iraqi mountains not far from the Turkish border. Hamsa is a member of the movement and controls access to one of ten camps.

Since the toppling of Saddam Hussein in April 2003, some 5,000 Turkish Kurds have been operating on Iraqi territory, a fact that was initially silently tolerated by Iraqi Kurdish leaders Massoud Barzani and Jalal Talabani. From here, the PKK planned attacks on Turkish security forces, to which the Turkish army always responded with retaliatory action in the form of airstrikes.

But now Hamsa and his colleagues have been told to pack up their things and leave the Iraqi mountains. The demand was issued by Iraqi Kurdish President Barzani. For days now, the Turkish air force has been bombing PKK positions on Iraqi territory with the PKK retaliating by carrying out attacks on Turkish police and soldiers in Turkey.

Greater patience in the peace process

Explaining the reasons for his demand, Barzani says he does not want the Iraqi civilian population to be drawn into the war between Ankara and the guerrillas. His statement makes it clear: PKK fighters are not "the Kurds", although this is often understood to be the case.

"On numerous occasions, we have called on the PKK to demonstrate greater patience in the peace process with Turkey," went the statement, thereby drawing a clear dividing line. "We told them that killing members of the Turkish security forces won't solve the problem". He goes on to say that this conflict can only be resolved though negotiations, elections and education. 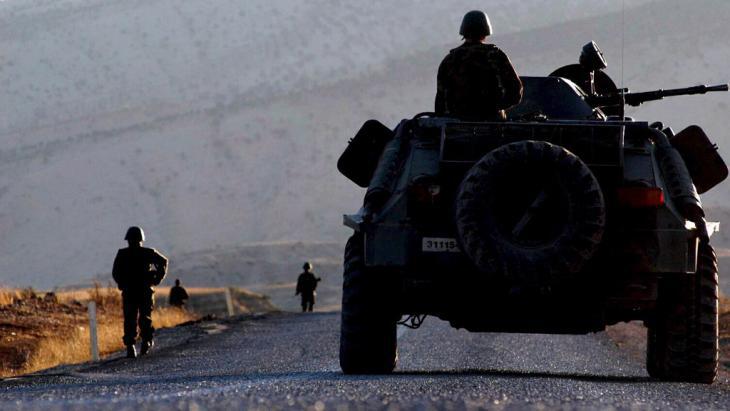 Expanding the battle zone: just a few days after the attack in Suruc, the Turkish air force began raids on IS positions in Syria, also targeting PKK camps in northern Iraq a short time later. Ankara puts the two groups on an equal footing, regarding both as terror organisations. The offensive led to the collapse of the ceasefire with the PKK, which has been in place since 2013. Pictured here: a Turkish army unit during an operation in the Turkish province of Sirnak

Barzani mentions the political achievements of the Kurds in Turkey in recent years which, with the success of the HDP in the last parliamentary poll, have pushed the Kurdish question to the forefront of Turkish political life. He says that he does not want to play any part in jeopardising this. When the peace process between Ankara and the PKK began more than two years ago under Barzani's mediation, a further 2,000 PKK fighters were supposed to withdraw from Turkey into the Qandil Mountains, put down their weapons and halt terrorist attacks against the Turkish government. But then came the terror militias of Islamic State (IS).

The heroes of Kobani

Since the autumn of 2014, the eyes of the Western world have been on the small town of Kobani on the Syrian-Turkish border. Initially captured by IS, Kurdish fighters from the PKK and its sister organisation the People's Protection Units (YPG) managed to wrest control of the town from the jihadists after protracted and bloody battles. The Peshmerga, who were also fighting alongside the YPG, were aided by members of the Iraqi-Kurdish security forces, who brought heavy machinery and military equipment to the battle zone. "The Kurds" were the heroes, Kobani became their symbol. The PKK hoisted its flag, which has a shining sun on it, where the black IS flag had previously flown.

But the PKK's success wasn't restricted to Syria. The organisation was also able to score points in Iraq. Its fighters secured a safe corridor for the persecuted Yazidis to enable thousands to escape the brutal gangs of IS murderers. PKK fighters were also able to recapture the city of Makhmour, close to the Kurdish city of Erbil, the seat of the Iraqi-Kurdish regional authority, from the clutches of IS.

Together with Peshmerga units, they were able to recapture territory in the Sinjar Mountains, although the city of Sinjar is still in the hands of IS. This cemented the impression in northern Iraq that without the PKK, victory over IS is impossible.

The Turkish-Kurdish guerrilla group basked in the international glory and seized its moment. They launched a civic offensive in Kurdish Iraq, opening offices in Erbil, Sulaymaniyah and Dohuk, intervening in the civil administration and demanding political involvement. In regional elections in Iraqi Kurdistan in September 2013, the political arm of the PKK in Iraq, the "Democratic Solution" (KDSP), only managed to garner a few thousand votes, which was not enough to enter the regional parliament. But commenting on the results of an opinion poll conducted in early July 2015, the Iraqi news portal "Niqash" reflected that the result of the next election is likely to look quite different. 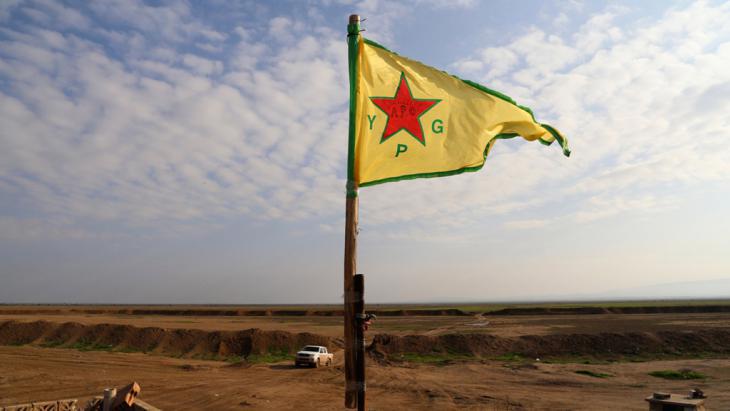 Military success in the fight against IS jihadists: Kurdish YPG fighters force IS back from the Sinjar Mountains on 20 December 2014. But the city of Sinjar remains in the hands of Islamic State. Pictured here: the flag of the Kurdish People's Protection Units (YPG)

No longer welcome in Iraq

This is why the head of the Iraqi-Kurdish Security Council, Masrour Barzani, called on the PKK to leave Iraq weeks before the Turkish air raids on PKK positions in Iraq and the collapse of the peace process between Ankara and the guerrilla movement. The son of the Kurdish President and most senior representative of the security apparatus of the Kurdish autonomous regions in northern Iraq instead recommended that the "Turkish militia" return to Syria "from whence they came". They were no longer welcome in Iraq, he said.

The PKK was founded on 27 November 1978 by Abdullah Ocalan together with 24 comrades from the village of Ziyaret in the Turkish province of Diyarbakir. The group's ideology was initially inspired by Marxist-Leninist theory, and its goal was to achieve a revolution through guerrilla warfare and then to found an independent Kurdish state.

During the second military coup in Turkey in 1980, supporters and numerous cadres of the PKK were arrested. Some fighters and the remaining leaders withdrew to Syria to regroup and reorganise.

When Hafez al-Assad, father of the current leader in Damascus, locked horns with the PKK, the group relocated to the Qandil Mountains in northern Iraq. The toppling of Saddam Hussein brought the Iraqi Kurds extensive autonomy, from which the Turkish guerrilla movement has also profited in recent years. The long years of their campaign have claimed the lives of up to 40,000 people.

The PKK nevertheless enjoys widespread support among the population in Iraqi Kurdistan. The successes in their campaign against IS in Syria and Iraq have won them much admiration. But Barzani is unlikely to be able to get rid of the PKK on his own. The resistance is too great in the other Kurdish camp led by Jalal Talabani in Sulaymaniyah. Talabani wants the PKK to remain in the Qandil Mountains and has been sharply critical of Barzani's decision.

A statement issued by Talabani's office complains that the eviction order was aimed at the PKK alone and points out that there was no mention of the Turkish army, although Ankara is equally to blame for the fact that the conflict has flared up again and for the stoking fears of further escalation.

Now Barzani is also being put under pressure by Ankara: "If you can't deal with the PKK, then Turkey will do everything necessary to defend itself," was the threat from Turkish President Recep Tayyip Erdogan.

The Kurdish president finds himself in a tight spot indeed.

A French artist has used photos of torture from Abu Ghraib for an oversized artwork at the Berlin Biennale. Reactions from fellow artists have been mixed, with some criticising ... END_OF_DOCUMENT_TOKEN_TO_BE_REPLACED

Since Ali Khamenei, Iran's most powerful man, has openly and unconditionally come out in support of Putin's war in Ukraine, logistical help is on its way, with an allegedly ... END_OF_DOCUMENT_TOKEN_TO_BE_REPLACED

The Palestinian militant organisation Hamas, with Hezbollah's help, is building up a military presence in Lebanon, the ultimate consequences of which could be devastating, writes ... END_OF_DOCUMENT_TOKEN_TO_BE_REPLACED

In this essay, renowned Lebanese journalist and writer Hazem Saghieh asks whether the Arab Levant, which stretches from Iraq in the east to Egypt in the west, will remain an ... END_OF_DOCUMENT_TOKEN_TO_BE_REPLACED

Extreme drought in Iraq has given German and Kurdish archaeologists the unique chance to examine an ancient Bronze Age city that was hidden beneath the water of a reservoir for ... END_OF_DOCUMENT_TOKEN_TO_BE_REPLACED

With his fist bump greeting for a man he previously called a pariah, US President Biden has paved the way for Saudi Crown Prince Mohammed bin Salman's return to the international ... END_OF_DOCUMENT_TOKEN_TO_BE_REPLACED
Author:
Birgit Svensson
Date:
Mail:
Send via mail

END_OF_DOCUMENT_TOKEN_TO_BE_REPLACED
Social media
and networks
Subscribe to our
newsletter