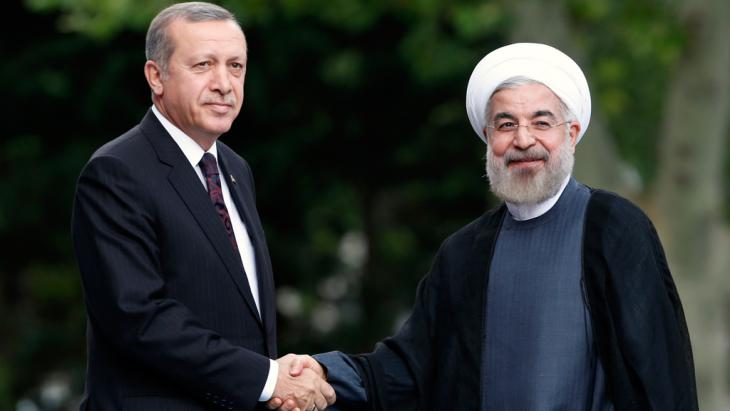 The Kurds and Turkish–Iranian relations
Caught between two stools

As differences over Syria and Islamic State continue to deepen between Turkey and Iran, Kurds living across the Middle East are set to become pawns in the intensifying rivalry between these two regional powers. By Dorian Jones in Istanbul

A dispute between Ankara and Tehran over truck transit revenues remains the only visible sign of deepening tension between Turkey and Iran, which is threatening to become one of the worst crises in their bilateral relations. "Iran sees Turkey as a big problem," observes Professor Nuray Mert of Istanbul University. "Since Ottoman times, both countries always found a modus vivendi, but now it seems they have failed the test over Syria."

Divisions over Syria are stark, with Tehran being the strongest backer of President Bashar al-Assad, while Ankara remains equally determined to bring the Syrian regime down by supporting the armed opposition.

In Tehran's eyes, the reason the divide is so bitter ironically lies in religion and in the Sunni Islamist leanings of the Turkish government. "Iranians say they would even prefer a secular government in Turkey, because at least it would not be sectarian," noted Professor Mert after a recent visit to Tehran, "Because the basic threat Iranians see from the Turkish government is Sunni sectarianism, which is very hostile to Shias in the region and targets Iran's allies and Iran's influence."

The escalating Iranian–Turkish tension could see Kurds – the world's largest nationless people that is spread over Iran, Iraq, Syria and Turkey – once again becoming pawns in the deepening regional rivalry.

For three decades, the Kurdistan Workers' Party, the PKK, has fought an on-and-off war with the Turkish state for greater minority rights. "It is not unknown for Tehran to give support to Turkey's Kurds even though it's fighting its own separatist Kurds," claims diplomatic columnist Semih Idiz of the Turkish newspaper "Taraf", "Tehran always judges the threat to Turkey as greater than to itself." 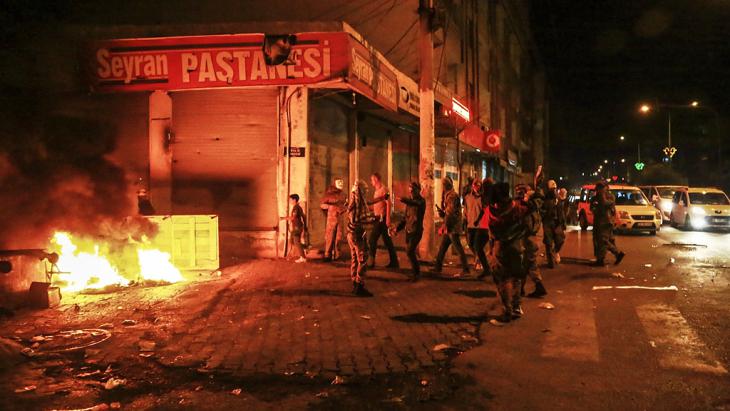 Kurds protesting in Diyarbakir, 7 October 2014. The recent rapprochement between Turkey and the Kurds has been put under terrible strain by developments in Syria and Iraq. "Islamic State's onslaught against the Iraqi Kurds in August exposed the frailty of the relationship," writes Dorian Jones

Turkish–Iranian tension over Syria has seen the re-emergence of these accusations. In July 2012, the PKK launched a major surprise attack on a garrison town of Semdinli in the predominantly Kurdish south-east of Turkey. The rebels are believed to have blindsided the Turkish army by crossing from neighbouring Iran. The attack was the zenith of an upsurge in violence by the PKK that coincided with Ankara stepping up its support for Syrian rebels fighting Assad's forces. Shortly after the Semdinli attack, Ankara initiated a peace process with the imprisoned PKK leader Abdullah Ocalan that resulted in a ceasefire in March 2013.

But the current Kurdish peace process is struggling amid mutual recriminations. "I am sure Iranian agents are very much present throughout Turkey, trying to stir things up," warns international relations expert Soli Ozel of Istanbul's Kadir Has University. A senior Kurdish member of the ruling AKP in Diyarbakir, who wanted to remain anonymous, claimed that Tehran tried to sabotage the peace efforts earlier this year with the offer of weapons and support to the PKK's military leadership based in neighbouring Iraqi Kurdistan. The offer, the official says, was declined.

A better deal could be on offer to the PKK. This month's airdrop of military supplies by the US to the Kurdish militia of the PYD, which is closely linked to the PKK, in the besieged Syrian city of Kobani is seen as the clearest signal of a new alignment by Washington.

"The US is coming back to the region, and the PYD and PKK are real allies," declares Kadri Gursel, author on Kurdish affairs, "despite the fact that the PKK is on their (the US) terrorist list, it does not change the situation on the ground. The PKK and PYD are the sole secular forces resisting the Islamic State in Syria."

Washington confirmed that it has had direct talks with PYD officials for the first time this month. One consequence of Washington's presence is seen as reducing the scope of Tehran's influence, at least for now. "When the US enters into the equation, Kurds refrain from being in the same picture as Iran. It all depends on the US, and how deep the US enters into the equation," predicts Gursel.

And so the old adage that "war makes strange bedfellows" once again rings true, with the US-led war against Islamic State. Tehran too may be only too happy for Washington to cosy up to the PYD and de facto to the PKK, being only too aware that it will infuriate Ankara and add to its feeling of isolation. Tehran is also likely not to want to risk tentative signs of losing its pariah status in western eyes, argues professor Mert, "Iran is improving its image in the West by improving its co-operation, which has almost legitimised it, because they were complaining about radical Sunni Islam and it seems they were proven right. So I think Iran will wait and see with the PKK, because Turkey is already isolated. But the Iraqi Kurds, is another matter." 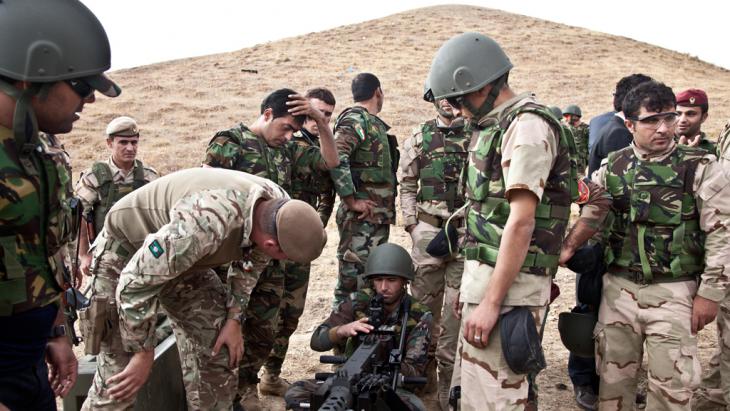 The US is not the only country supplying the Kurds with weapons. So too are the UK and Germany. Pictured here: British troops training Kurdish Peshmerga on new machine guns

Frail reconciliation between Turkey and Kurds

The transformation of Turkey's relations with the neighbouring, semi autonomous Iraqi Kurdistan, is held up by the ruling AK Party as one of its crowning diplomatic achievements. Once viewed with open hostility by Ankara, Iraqi Kurdistan has not only become a key trading partner, both sides have also spoken of a wider strategic partnership. It was dubbed a match made in heaven: Turkey with its powerful army, and the energy-rich Iraqi Kurdish region providing both a market and a buffer zone of stability in a region dogged by chaos.

Islamic State's onslaught against the Iraqi Kurds in August exposed the frailty of the relationship: "When the Iraqi Kurds reached out to Turkey, what they heard was largely 'we would love to come and help you in a stronger way, but Islamic State holds 49 hostages of ours'," recounts diplomatic columnist Asli Aydintasbas of the Turkish newspaper "Milliyet". "This is a strategic alliance that failed its first strategic test, so it's not a strategic alliance."

Tehran was not slow to seize the opportunity. "Iran was there, out there offering help, whatever you guys need," says columnist Aydintasbas, "They were on the battlefield; not just that, the fact that Qasem Soleimani, the head of Iran's elite al-Quds force, was out in the field fighting with the Kurds and being quite visible on the scene, means something. This episode marks a comeback for Iran."

The region's Kurds are set to become a focal point of the intensifying rivalry between Tehran and Ankara. But the scope of that rivalry is likely to be dictated by what role Washington ultimately decides to play in the region and where the Kurds fit into its strategy.

Home
Print
Newsletter
More on this topic
Iran's foreign policy in Yemen and Iraq: Arab fear of the "extended arm of Iran"The Syrian conflict and the fight against IS: Time to treat allies like alliesInterview with Turkish politician Sirri Sureyya Onder: The solution to the Kurdish conflict as a yardstick for democracyTurkey and the alliance against IS: Of inaction and double standardsTurkey, IS and the Kurdish conflict: "Kobani is now everywhere"
Related Topics
'Islamic State' | IS, Kurds, PKK, Syrian Civil War
All Topics

Iranian author Fariba Vafi is adept at describing everyday scenes and concealing within them something ambiguous, in parts strange and grotesque. She writes novels – which have ... END_OF_DOCUMENT_TOKEN_TO_BE_REPLACED

In her latest exhibition in Japan, Farzaneh Khademian depicts figures who seem detached from their surroundings. In interview with Qantara.de, the Iranian photographer and painter ... END_OF_DOCUMENT_TOKEN_TO_BE_REPLACED

The catastrophic human rights situation in Bahrain is being largely ignored by the rest of the world. Despite all the damning evidence, which includes a Human Rights Watch report ... END_OF_DOCUMENT_TOKEN_TO_BE_REPLACED

Talks to salvage the 2015 Iranian nuclear deal have entered their eighth round in Vienna. Even if a deal is struck and some of the sanctions are lifted, the state of the Iranian ... END_OF_DOCUMENT_TOKEN_TO_BE_REPLACED

Every year in December, the team at Qantara.de takes a look back at the articles that proved most popular with our readers. This year is no different. Here is a run-down of the ... END_OF_DOCUMENT_TOKEN_TO_BE_REPLACED

END_OF_DOCUMENT_TOKEN_TO_BE_REPLACED
Social media
and networks
Subscribe to our
newsletter