The Kurds of Syria
An Insecure Stone in the Syrian Mosaic

The various ethnic and religious groups in Syria live relatively peacefully together. But many Kurdish Syrians find themselves stateless in their own country. Manuela Römer reports that they do not feel part of the so-called "Syrian mosaic" 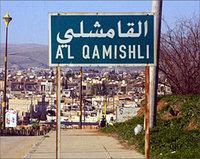 ​​Salar Aussi is sipping from his wineglass in the restaurant of the journalists' club in Damascus. The Kurdish writer has just written a book on "The Kurds in the Arab Cultural Consciousness." It was printed in Lebanon since he could not get permission for it to be printed in Syria.

Aussi says the Kurds, who make up almost ten percent of the population in Syria, do not have the same rights as the other minorities.

"On the main street of Rukne Din," he points out, "which is a district of Damascus which is mainly populated by Kurds, you'll find the social welfare organisation of the Circassians. You'd think there'd be a similar organisation for the Kurds. But there isn't. That's the difference."

Kurdish songs in the capital

Aussi's wife Sonja tells of how she went with Kurdish friends to a restaurant near the famous Ummajaden mosque, and how the owner stopped them from singing Kurdish songs.

"I was the only Arab in the group," she remembers, "and I asked why it was forbidden. He said it was because the security services wouldn't allow songs to be sung in Kurdish because the other guests in the restaurant wouldn't understand them. But there were Spanish people at the next table, and they sang in Spanish and that was quite all right."

Singing in Kurdish may be a problem in the capital, but it is quite normal in Qamishli. There's Kurdish music playing at weddings, in restaurants and from the loudspeakers outside the shops along the main streets. Qamishli is the largest town in Hassake province and it is regarded as the secret capital of the Kurds. It is also the centre of the Syrian Kurdish problem.

The background to the problem lies in a special census carried out in 1962. From one day to another, as a result of that census, tens of thousands of Kurdish Syrians suddenly found themselves defined as foreigners. 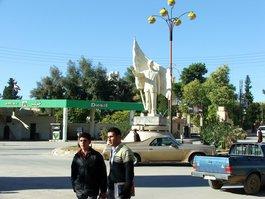 Hafez al Assad has risen again; his monument was toppled during the unrest in Qamishli in 2004

​​The loss of their nationality meant that they lost a number of basic rights. They were unable to vote, to buy land, property or businesses, and they could not get passports to travel abroad. They only got a "red card" as identification. Those who have not registered with the authorities, the so-called Maktumin, have no official existence. They are illegal.

It is not only Kurds who are affected by this problem. Christians too suffer from the effects of the census. But they make up only about fifty families--a fraction of the number of Kurds affected.

Many Kurdish intellectuals see the census as having had a political background. At the high point of Arab nationalism, the census was used to ensure that the ethnic make-up of the areas where the Kurds were concentrated was adjusted as far as possible to the benefit of the Arabs.

No investment in Kurdish areas

Many Kurdish farmers have now left the area in search of work; they survive in Damascus as taxi-drivers or waiters.

"No factories are built or big economic projects started in the Kurdish areas," says Ismail Omr of the banned Kurdish Unity Party. "For example: a paper factory was built in Deir Azor province. For paper you need straw. The province which produces the most straw is Hassake. But the factory wasn't built here so that the Kurds wouldn't profit from it."

The deputy prime minister, Abdullah Dardari, who is an expert on economics, rejects the accusation of economic discrimination.

"That is a great oversimplification," he says. "We don't ask about the ethnic background of the people who profit from state investment. For example, we now have a big dam close to [the Kurdish area of] Afrin. And that paper factory was built in the seventies. Deir Azor was chosen then because of the water from the Tigris. Today we would decide differently. Everybody knows that."

Since 2002, the state has been holding a dialogue with the Kurds. It has promised at least 90,000 Kurds that they would receive Syrian nationality. But so far nothing has happened. And while other minorities, like the Armenians, are allowed to learn their languages in private institutions, this is not allowed to the Kurds.

The Kurds have organised themselves into parties to lend force to their demands. These parties are banned (as are all other opposition parties), but they are to a certain extent tolerated. The government is afraid that the Kurds want to set up an independent state.

In the early seventies, as a counter to this, the government pushed through a controversial transfer of population. A strip of land, 350 km long and 15 km wide, which belonged mainly to Kurds and which bordered on the Kurdish part of Turkey, was handed over to non-Kurdish Syrians.

Demand for a state of their own

"This racist project to create an 'Arab Belt' is something we cannot accept," says Ismail Omr. "We have a right to our land." He demands autonomy for Kurdish areas in Syria.

Suad, the daughter of the well-knowns Kurdish writer, Cegerxwin, who comes from Qamishli, goes even further. "If I'm honest," she says, "I would like to see a state for all the Kurds. But if that's not possible, then a federal structure would also be all right."

The writer Salar Aussi does not have much understanding for such demands. He has not joined any of the dozen Kurdish parties because, as he says, "They are all very conservative."

He finds them too inward-looking. "They only direct themselves at the other Kurds and not at the Syrian Arabs. But it is the Arabs that we have to convince so that they understand our position and stand with us to help us achieve our justified demands."

Islamism among Turkish Kurds
Growing Influence of the Hezbollah
A new political movement is making headlines in the Kurdish region of southeastern Turkey – the Islamist Hezbollah. Organized in small groups and modeled after the Palestinian Hamas movement, it is primarily active in ghettos where refugees live. Amalia van Gent reports

END_OF_DOCUMENT_TOKEN_TO_BE_REPLACED
Social media
and networks
Subscribe to our
newsletter